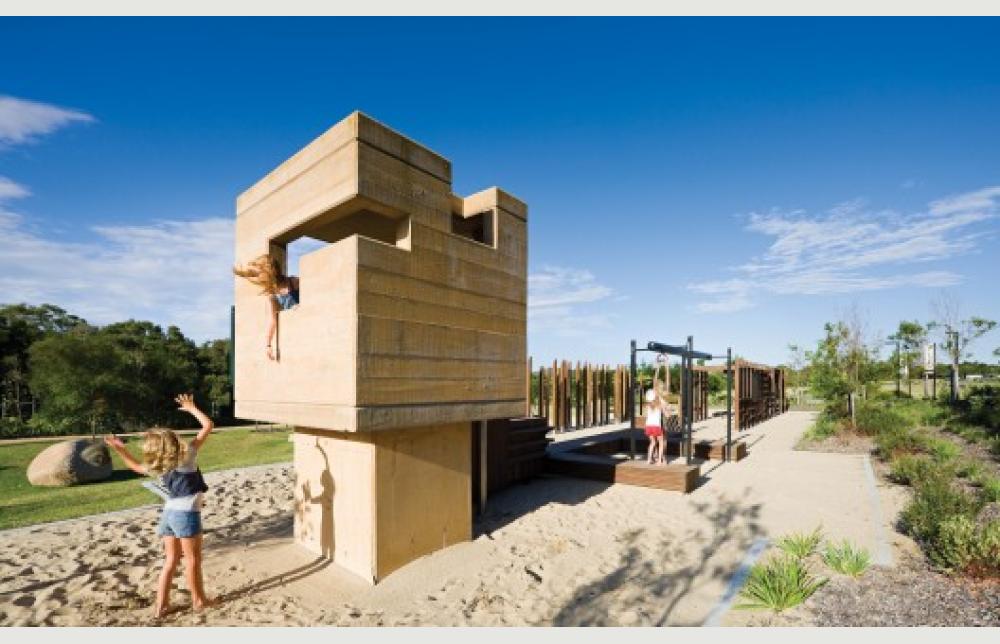 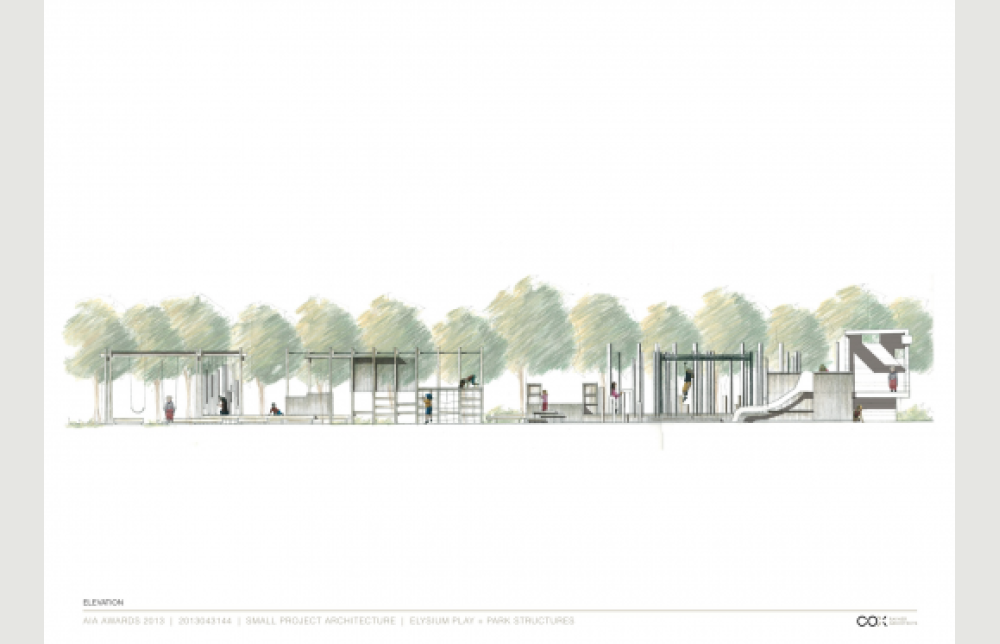 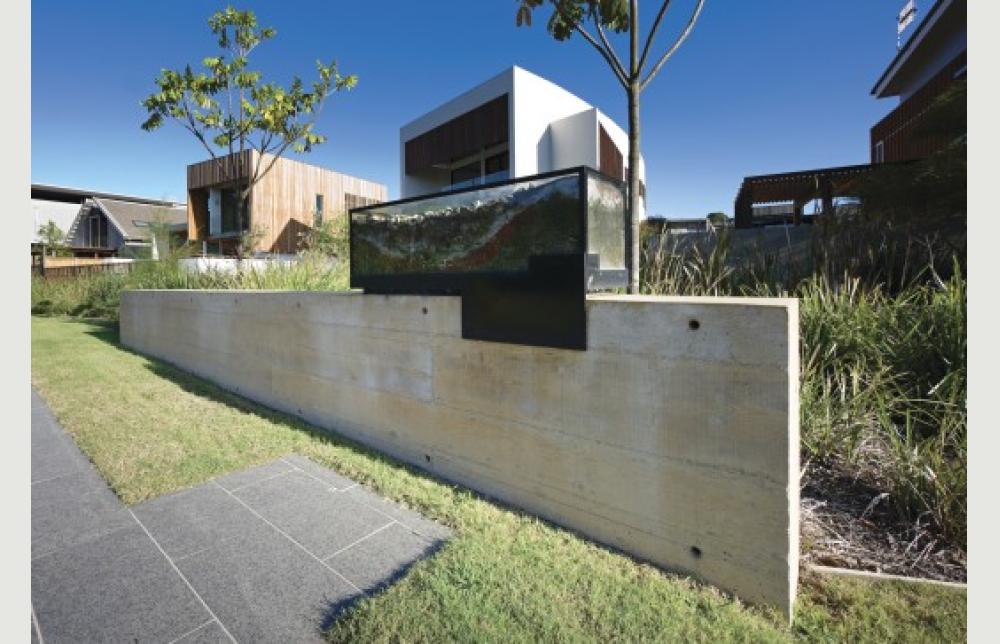 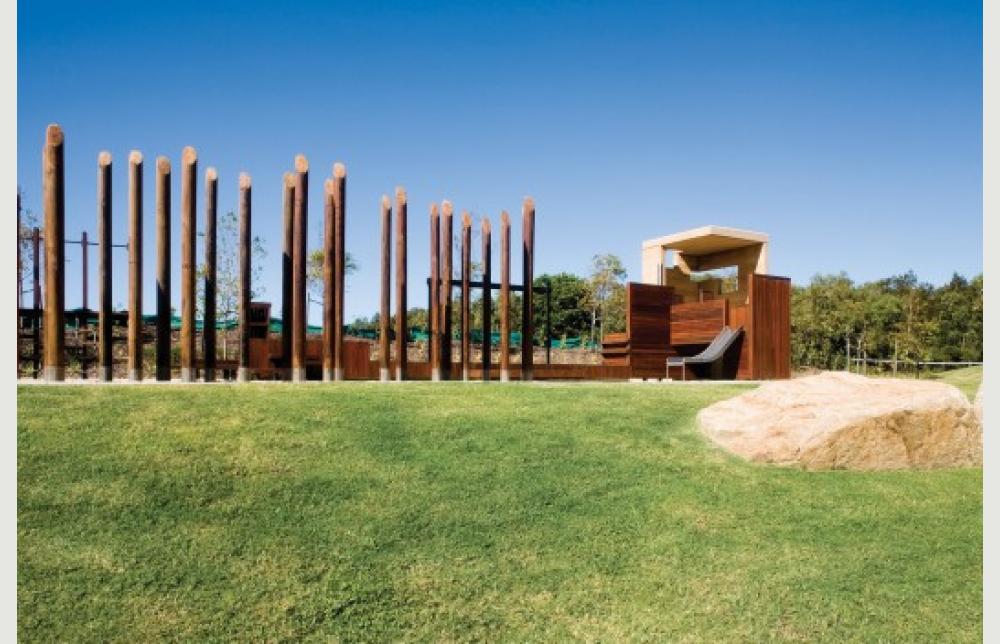 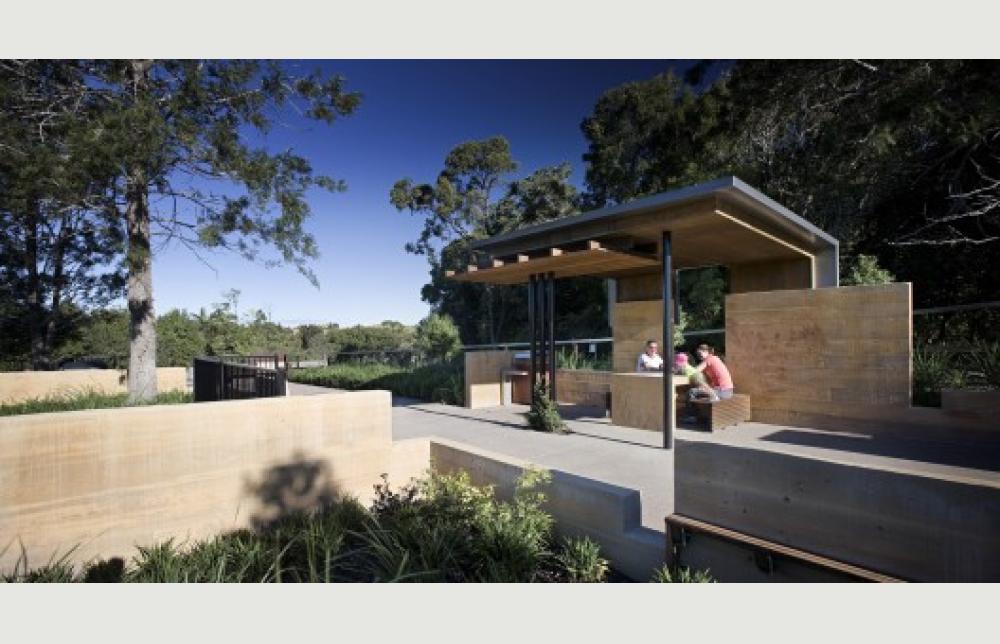 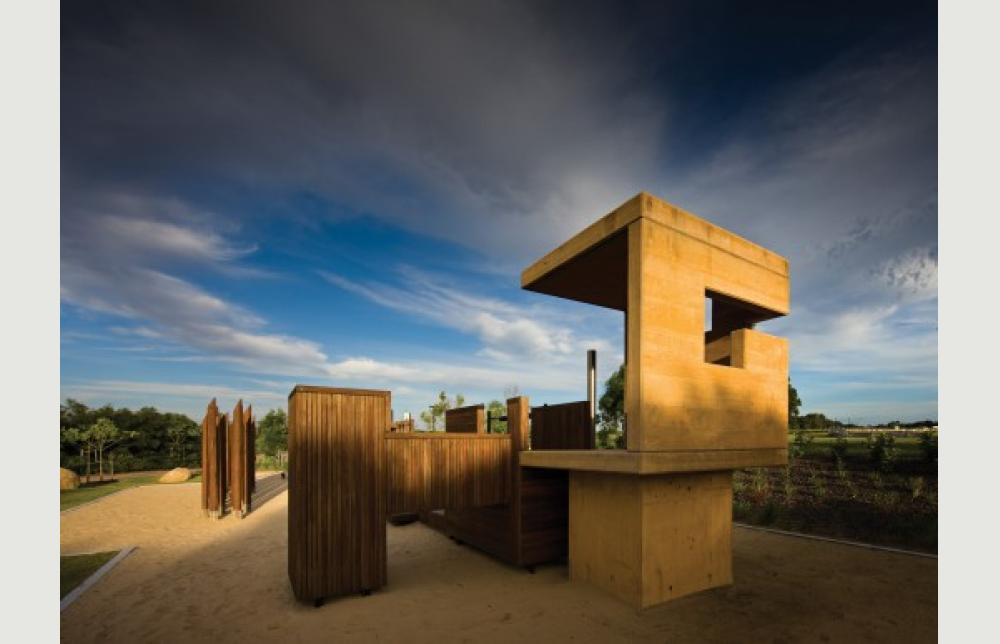 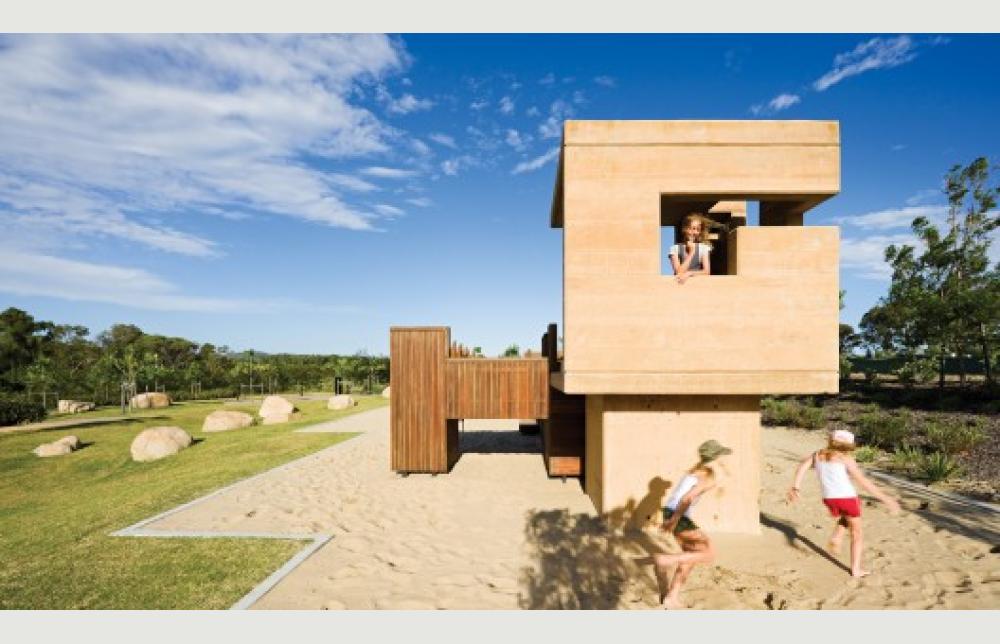 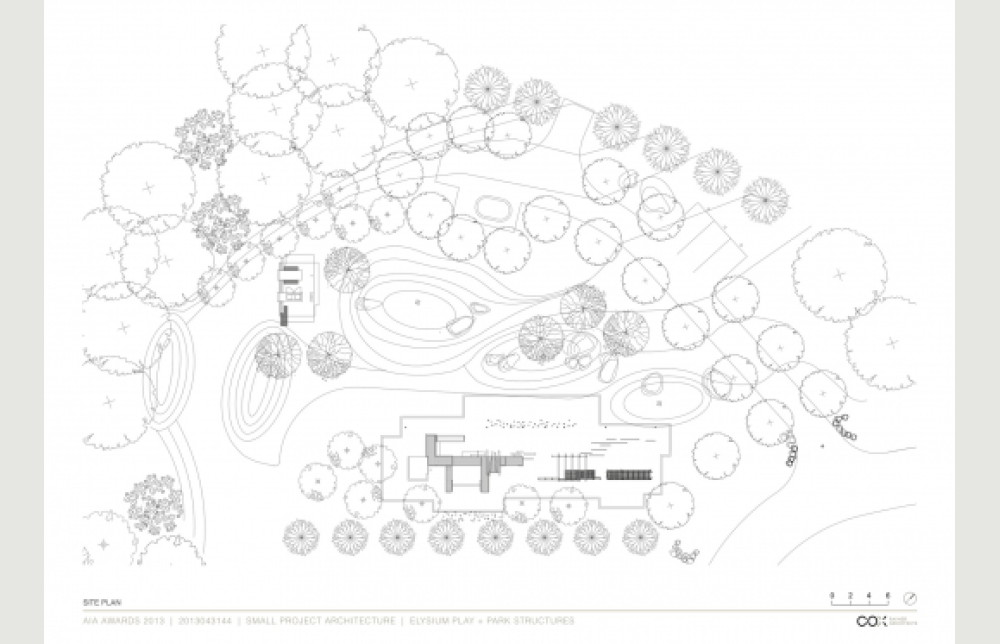 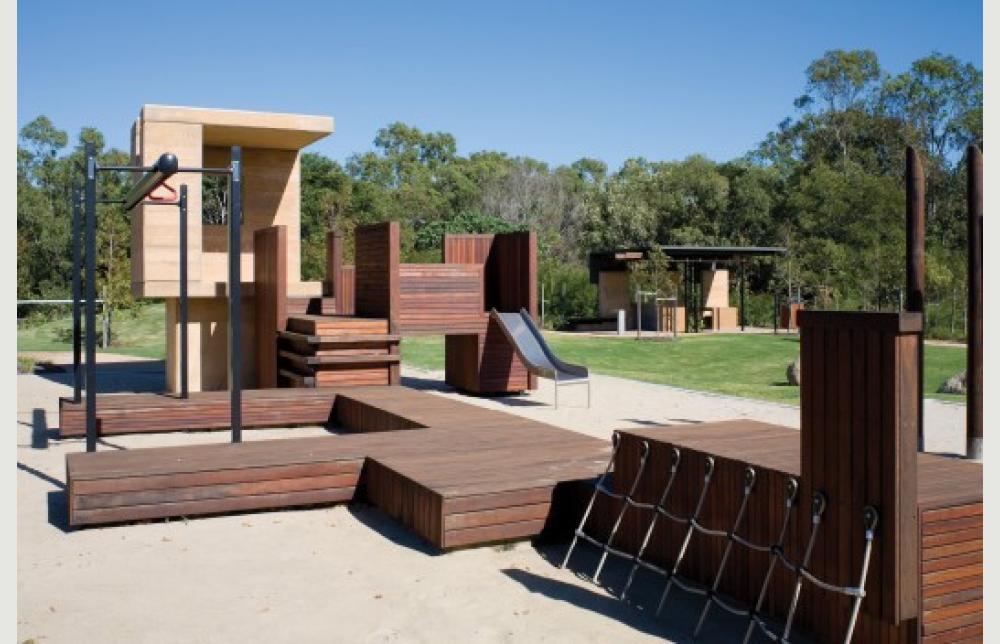 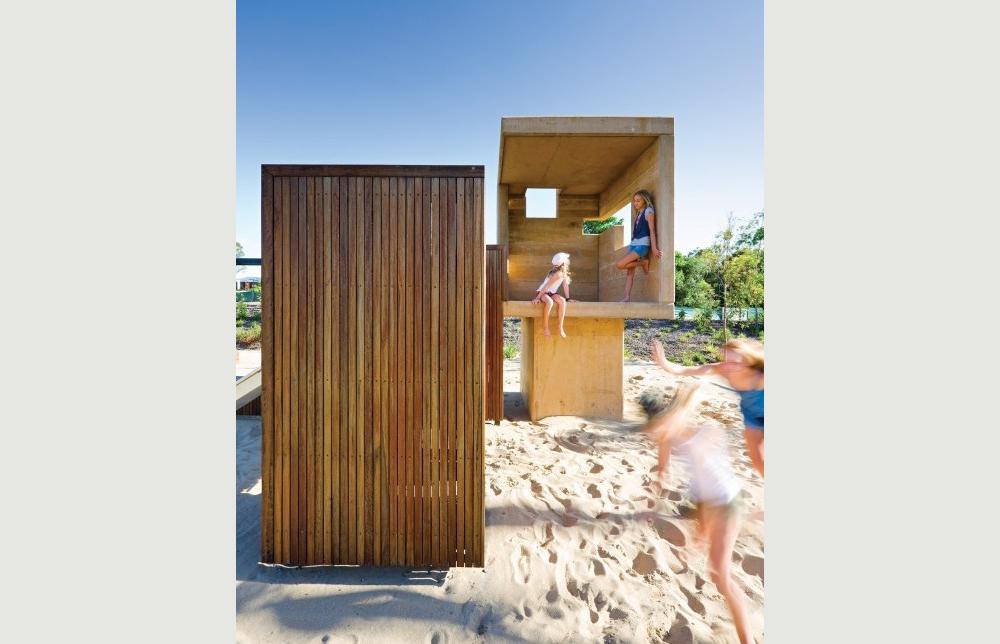 The project consists of a play structure and a series of small shelters and elements which coordinate to provide significant amenity to the parklands and streets of a new residential community in Noosa. All of the houses were designed by selected Queensland and other Australian architects of note.

The Elysium Playground was one of two projects selected to represent the exhibition ‘Placemakers-Contemporary Queensland Architecture’ held at the Queensland Gallery of Modern Art in November 2008. It is a celebration of children under the Queensland sun, designed (in contrast to the client’s original intention to merely purchase off-the-shelf plastic structures) to also act as a place of community recreation. It is a linear sequence of concrete and timber elements forming a distinctive park edge, playing shadow with light, acting as a piece of raw installation art.

The other elements – BBQ shelters, interpretive walls and furniture, are extensions of the playground language, together tying the disparate residential architectures into a recognisable community.

Conceptual Framework
The client’s original intention for the playground was to buy a proprietary primary-coloured French system. We contended that a suite of interconnected hand-made play elements would accomplish much more – intriguing challenges for children, a place where anyone could come to rest or chat, an installation particular to and identifying Elysium’s community. From this gestation, the idea of all other park elements belonging to a consistent vocabulary of materiality emerged.

Public and Cultural Benefits
The playground structure has become synonymous with the Elysium community while also accessible to anyone to enjoy. From a cultural perspective, it also celebrates an Aboriginal Midden at the end of the structure, for which the last element – a concrete cubbyhouse – acts as a viewing ‘nest’ overlooking the midden site.

Relationship of Built Form to Context
The playground and park structures form a unified collection of elements which cohese the community and it’s vastly varying styles of detached residential architecture. The use of raw materials – earth coloured concrete, timber and copper – enable the elements to form a synergistic part of the natural environment which weaves through the community.

Program Resolution
The playground structure was developed in consultation with a playground consultant as a sequence of elements which both stimulate children’s minds and challenge their physical abilities to different degrees. Each part was designed also as an ‘architectural / landscape’ space with the idea of inviting children to contemplate the role of built and landscape elements.

Allied Disciplines
The project was designed in consultation with the playground consultant Clive Dodd from Consulting Co-Ordination Pty Ltd.

Cost/Value Outcome
We never found out the actual playground cost but know that it was less than the budget required for the proprietary system originally intended – with much more value to the community and its children. Utilising the same materials and methods for the other structures generated cost efficiencies of the one system.

Response to Client and User Needs
Wonderful responses from both, plus the acknowledgement of the Placemakers exhibition curators of such inventive small architecture being duly celebrated, completely delighted the client.

Sustainability
The concept for all elements in Elysium Noosa was to create a series of playground, shelter and interpretive pieces that harmonised with and fostered community sensitivity towards the site’s natural forests. In particular is the convincing of the client not to purchase imported proprietary plastic and steel playground structures from France and instead construct a custom-designed playground installation from natural materials. Of these, a primary material is rough-sawn recycled pine used for the concrete formwork and recycled hardwood for the timber apparatus.

Construction economy was generated by the re-use of the one formwork for the playground concrete as for the BBQ and other park shelters, and retaining walls. A further particularity reinforcing the project’s sustainability commitment was the conservation of an important aboriginal midden, which is celebrated by the lookout pavilion at the end of the playground structure. The raw and natural materials of all elements are designed to enable them to age and weather gracefully with minimal maintenance.