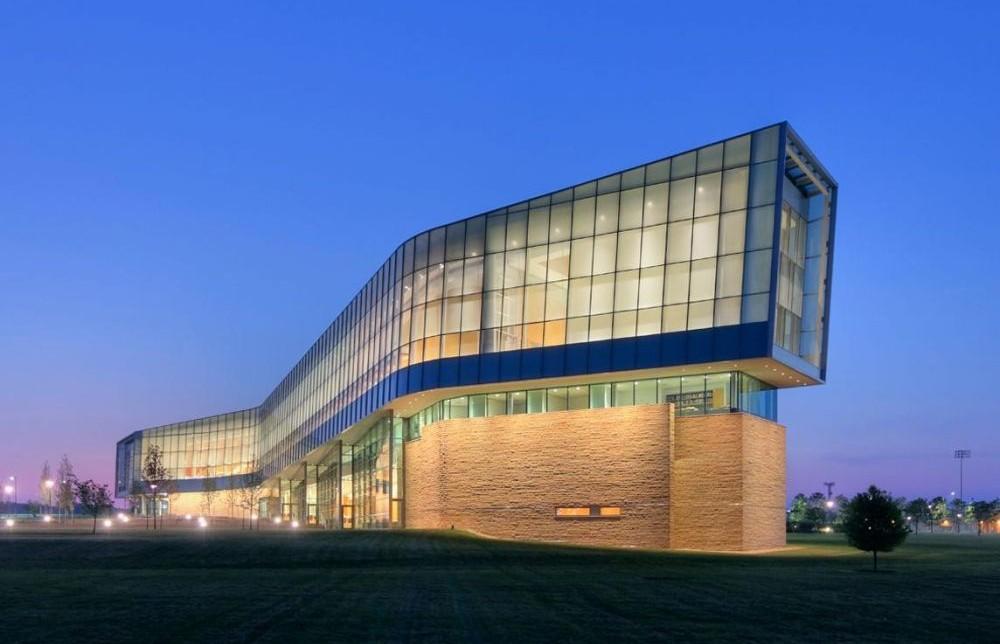 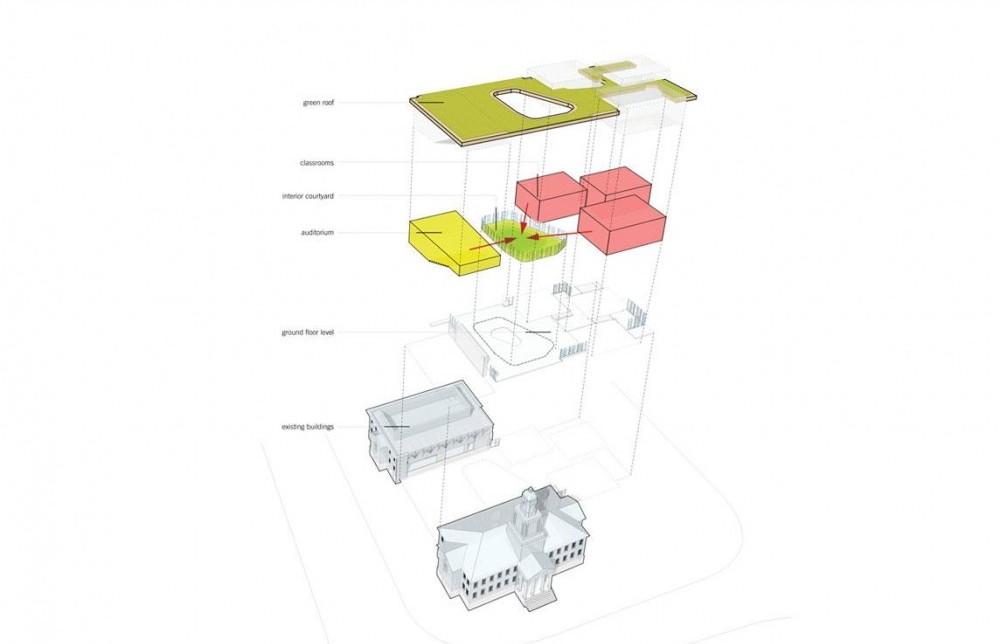 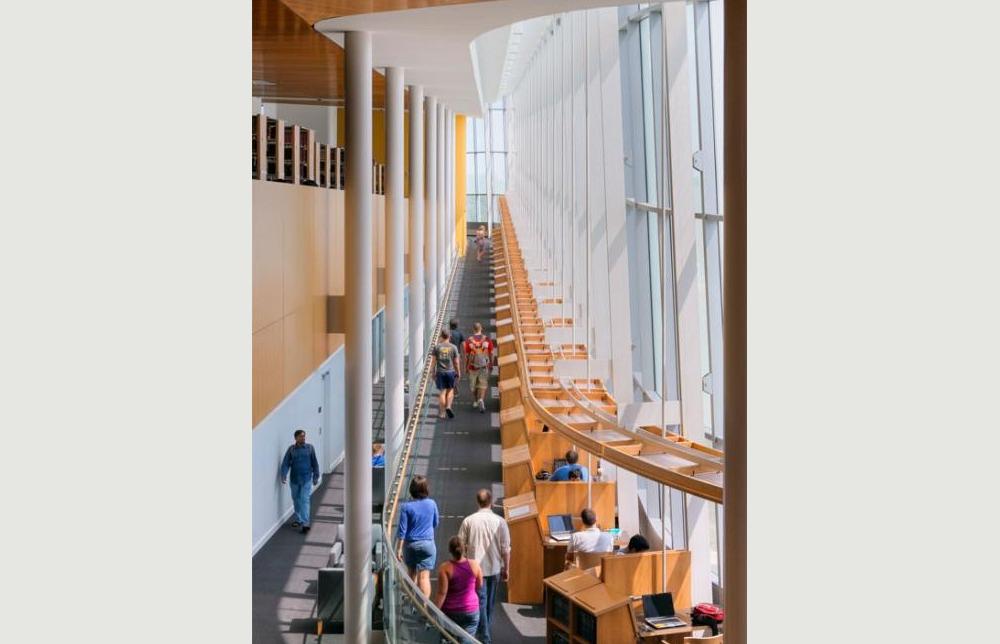 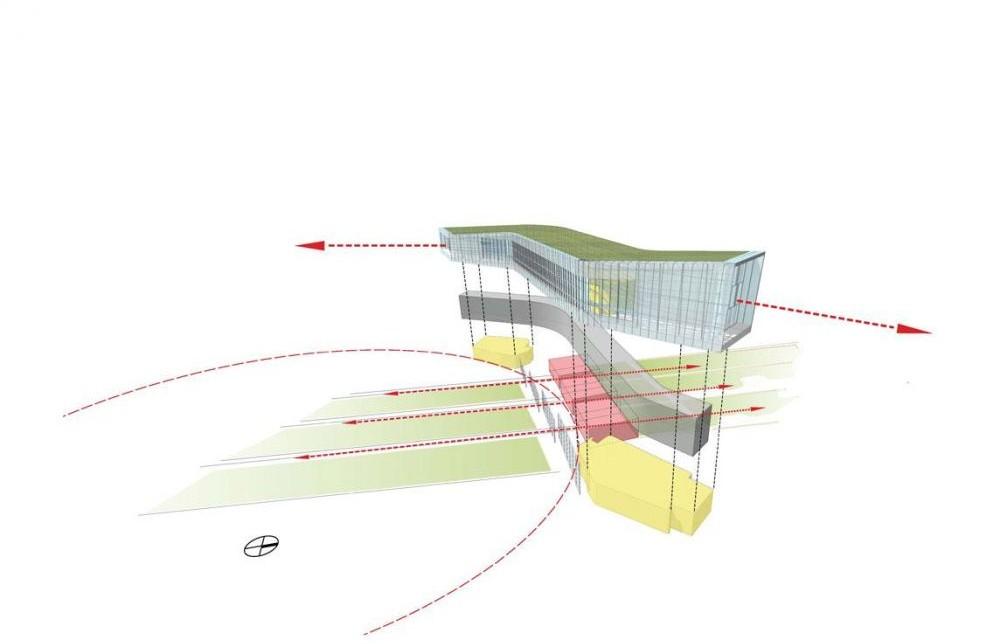 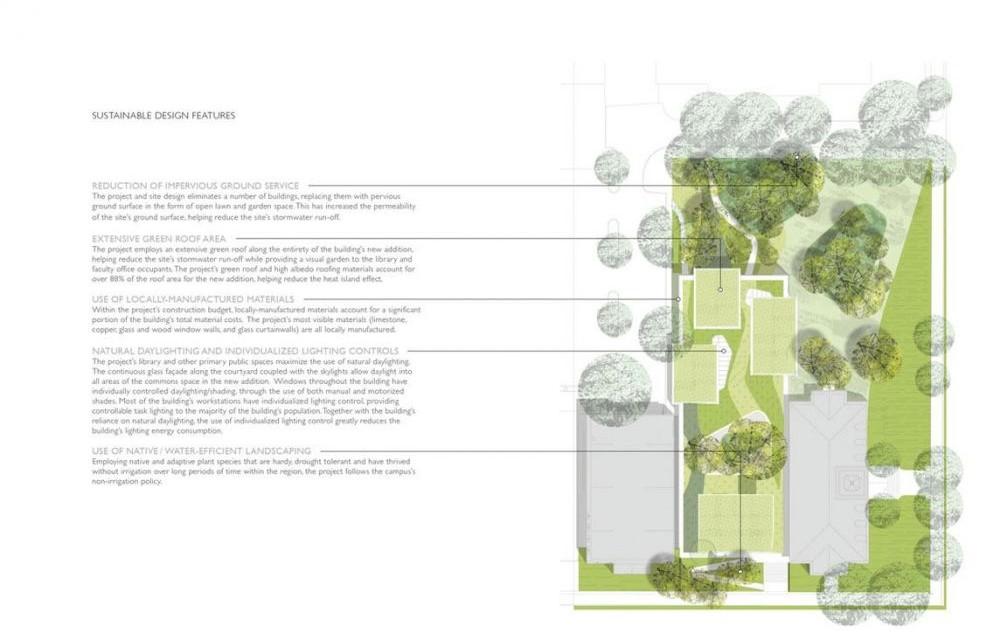 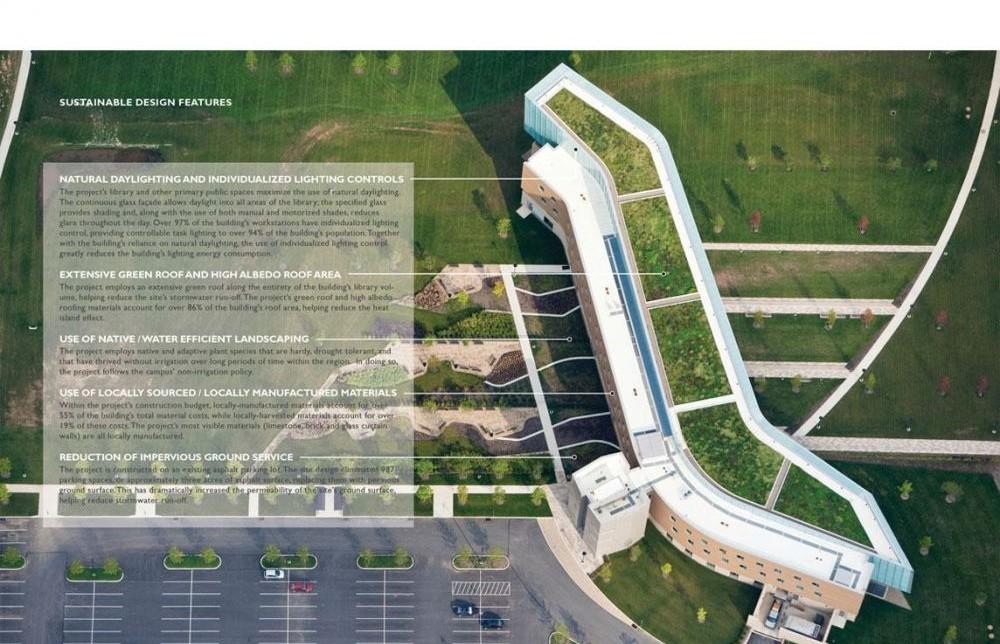 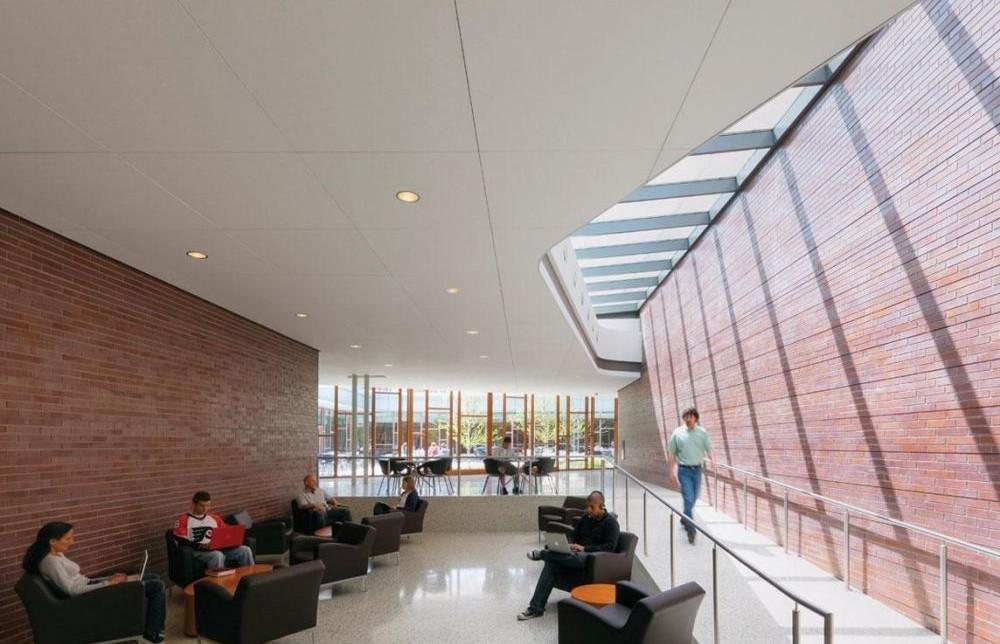 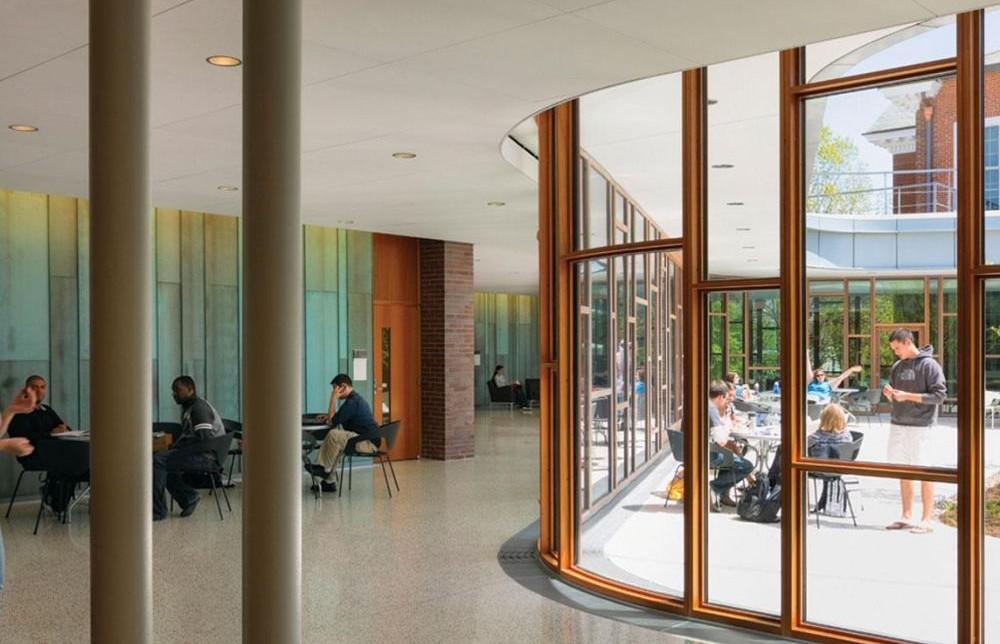 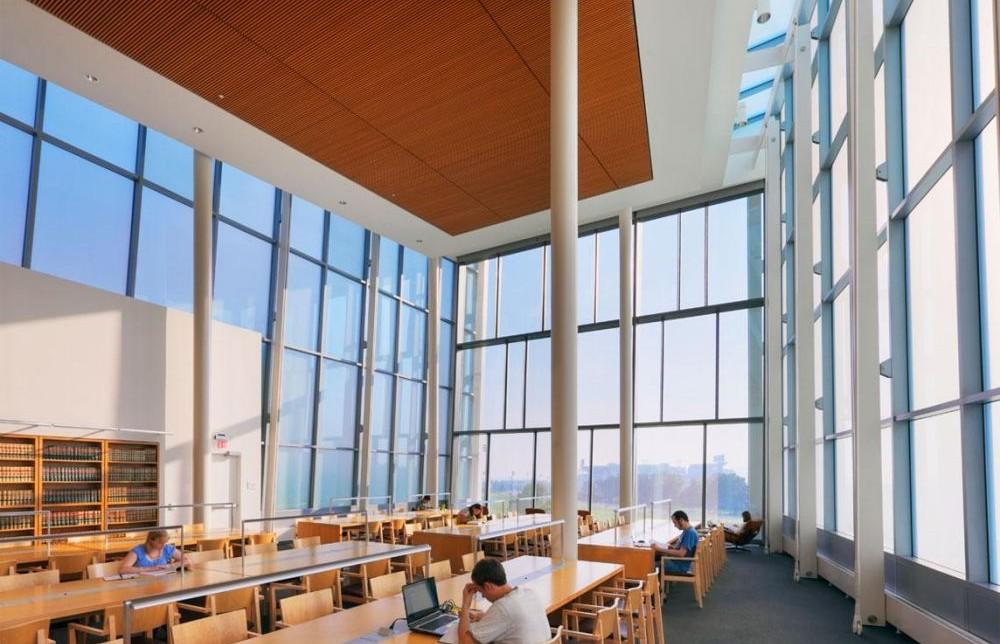 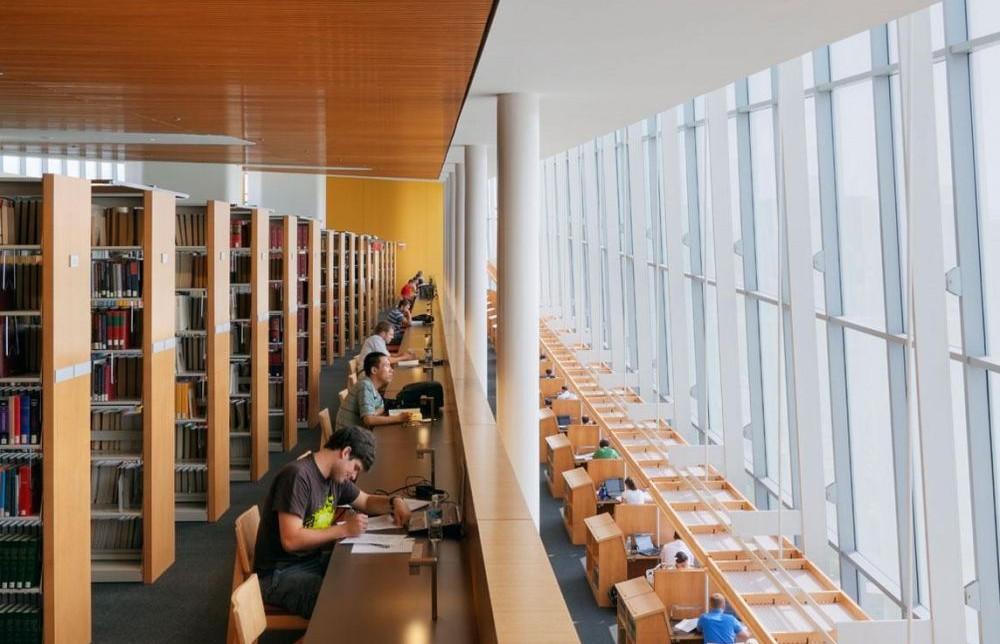 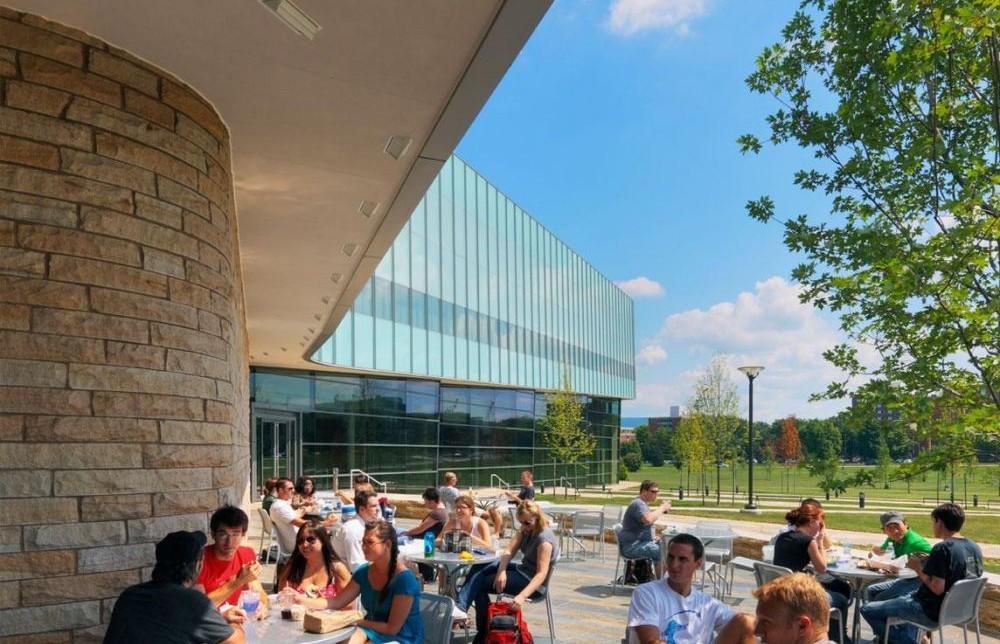 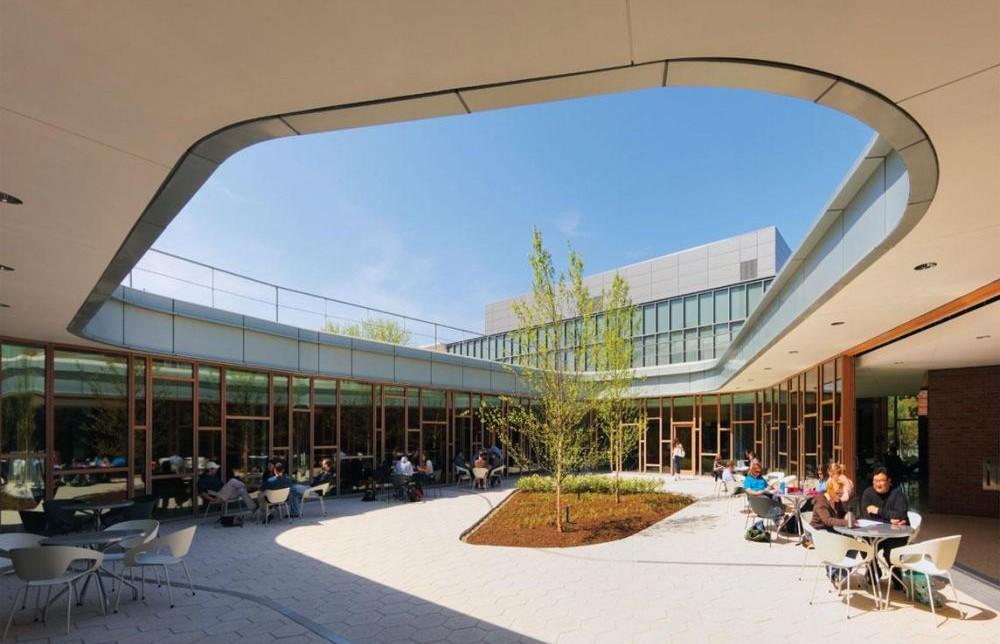 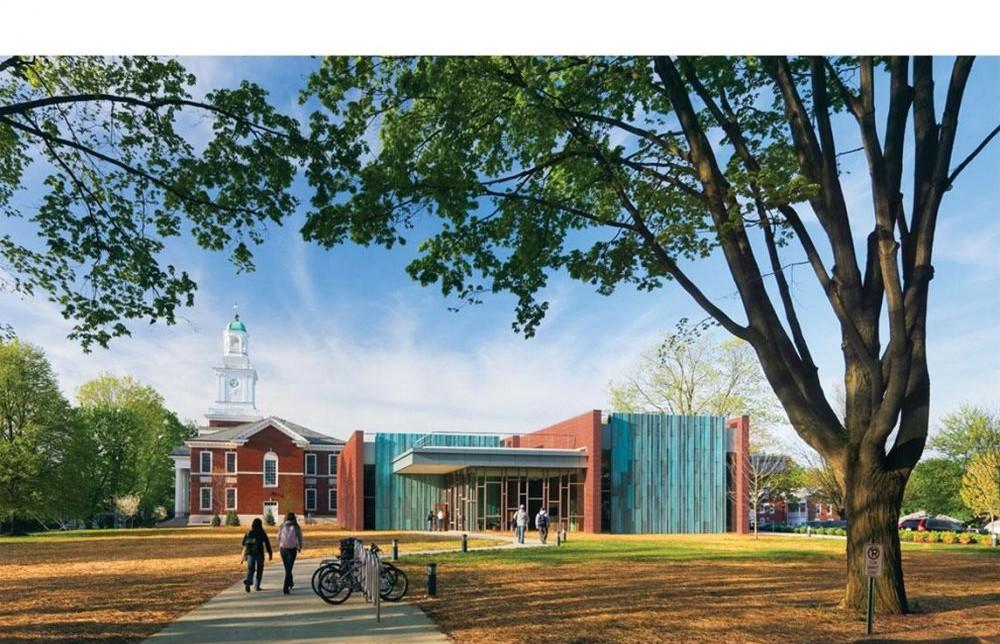 The new Dickinson School of Law was established on the solid foundations of two institutions: a venerable independent law school in a small town and a multi-disciplinary public university on a sprawling campus. Founded in Carlisle and with strong ties throughout its history to the state’s legislative bodies in Harrisburg, the Dickinson School of Law is the oldest law school in Pennsylvania and the fifth oldest in the United States. A merger of Dickinson and Penn State addressed both institutions’ aspirations for future growth: Dickinson students and faculty would engage academic programs and other resources of Penn State’s University Park campus, thus allowing the law school curriculum to expand, and students and faculty in other disciplines would gain access to law professors, legal scholarship and current studies in the law. It was the architectural mandate that the two locations share a singular identity and respond to their particular circumstances — one, a new building on an open site on the edge of Penn State’s University Park campus, and the other, an expansion of the School’s historic building on an impacted site in the town of Carlisle. In effect, the union posed an unprecedented architectural challenge. The first academic building to break ground at the north edge of Penn State’s University Park campus, the Lewis Katz Building of the Dickinson School of Law establishes a gateway to the University and an identity for the new law school. The sinuous form of the 112,000-square-foot building is a direct response to the agrarian nature of the site, the valley in which it sits and the powerful presence and silhouette of the surrounding mountains. Each of the building’s two ends is directed towards a specific landscape, one near and one far: the adjacent arboretum, and across the valley, the distant Mount Nittany. The architecture of the new building expresses the law library as the theoretical and physical heart of the legal educational experience. Conceived as a floating element, the library shelters volumes containing classrooms, auditorium and courtroom — the remainder of the School’s public program. These primary program elements surround a broad commons area, which opens to the landscape and follows its stepping contours, directly connecting the school’s program to the surrounding campus. A masonry bar of faculty offices parallels the library volume. A continuous circulation route unifies the library’s two levels. Reinforcing the goal of creating an integrated community, the law school is accessible, light-filled and open. Within the library, various types of study environments, including a reading room, stacks and individual carrels along the connecting ramp, provide opportunities for student and faculty interaction. Expansive views of the campus and the distant mountains infuse spaces whose transparency and openness reinforce the School’s progressive mission. Designed in consultation with federal and state court judges, the School’s moot courtroom provides a technologically-advanced space for trial preparation, mock court hearings and actual judicial proceedings. All instructional spaces and moot courtrooms on both campuses are designed to be electronically linked to one another or to any other institution or venue around the world. Clad in glass, the curving library volume creates a constantly changing backdrop of reflected sunlight throughout the day and a beacon of light at night. It is a highly visible, luminous element — its undulating form unfolding in perspective as visitors drive past. Lewis Katz Hall establishes a new center of student activity for the Carlisle campus and, despite the physical distance, formally connects the Carlisle campus to the School’s new building on the University Park campus. Incorporating two existing structures, the new Carlisle complex restores historic Trickett Hall, renovates and repurposes an existing addition as faculty offices and creates a new connecting structure, which houses the campus’s classrooms and public spaces, connects the School with its surrounding neighborhood and creates a sense of place for the entire renovated campus. The design of the new building responds to important site characteristics: the individual classroom volumes recall the scale and materials of the surrounding residences; and the prominent, landscaped green roof references the neighborhood’s ubiquitous tree canopy and the broader region’s agrarian planting patterns. Conceived as a large porch, the public commons area is directly adjacent to a terraced outdoor space, the stepped contours of which continue uninterrupted through the building. The architectural solution responds directly to the School’s desire to create an identifiable center that maximizes natural light, air and accessibility to outdoor space within the existing campus. The campus’s new identity derives from the creation of a public commons: a primary, spatially-identifiable center that pulls together the disparate existing elements of the campus. This expansion houses the School’s primary classrooms, a ceremonial courtroom, hearing room, an auditorium and student meeting spaces, all connected by a continuous open commons space. Perforated by skylights and a courtyard and open on all sides to the surrounding neighborhood, this new public center creates a sense of openness and accessibility and provides a visual connection to the School’s historic past.