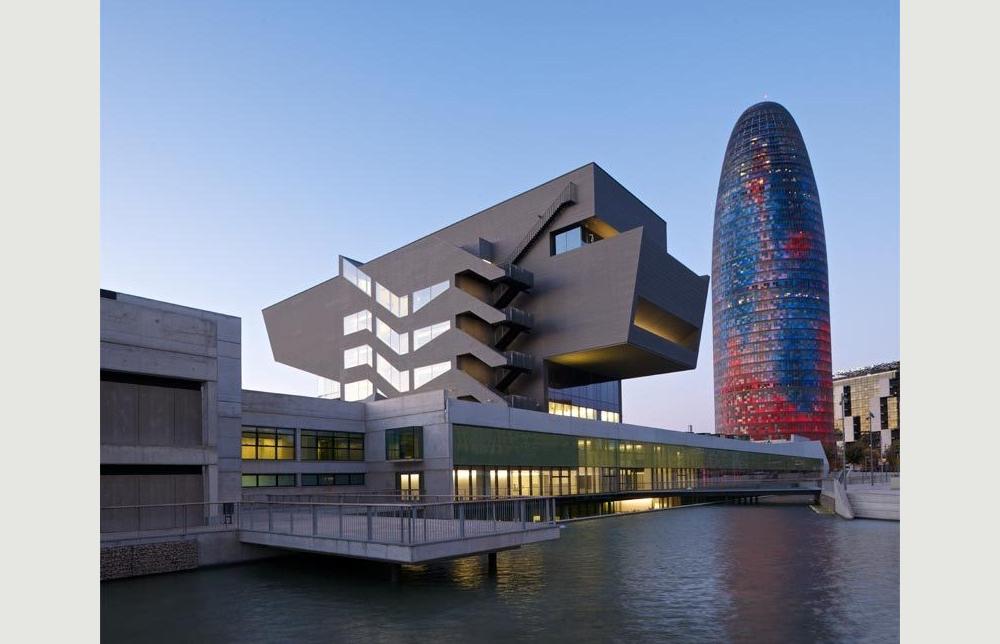 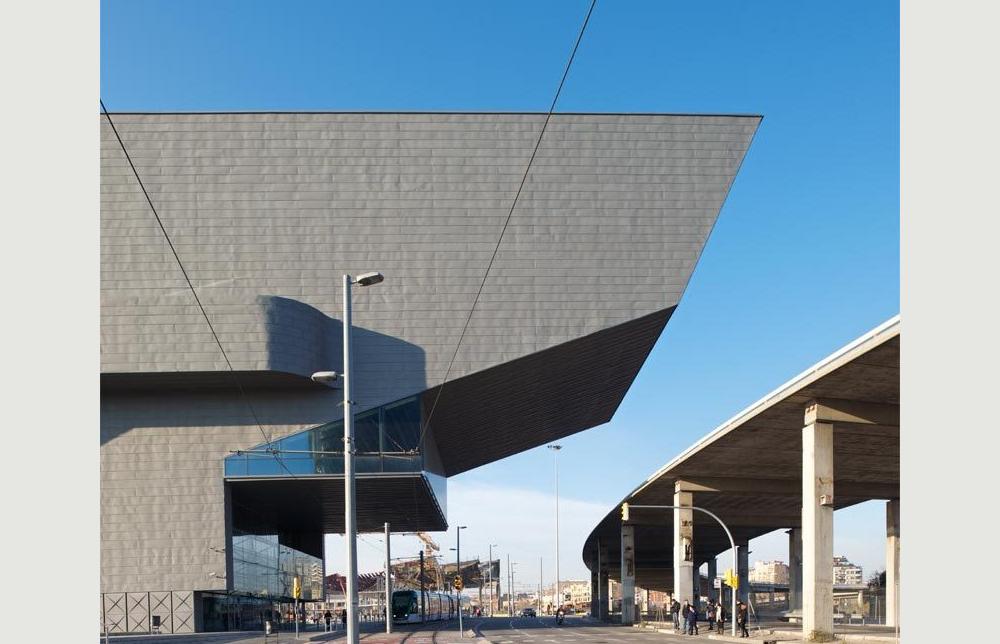 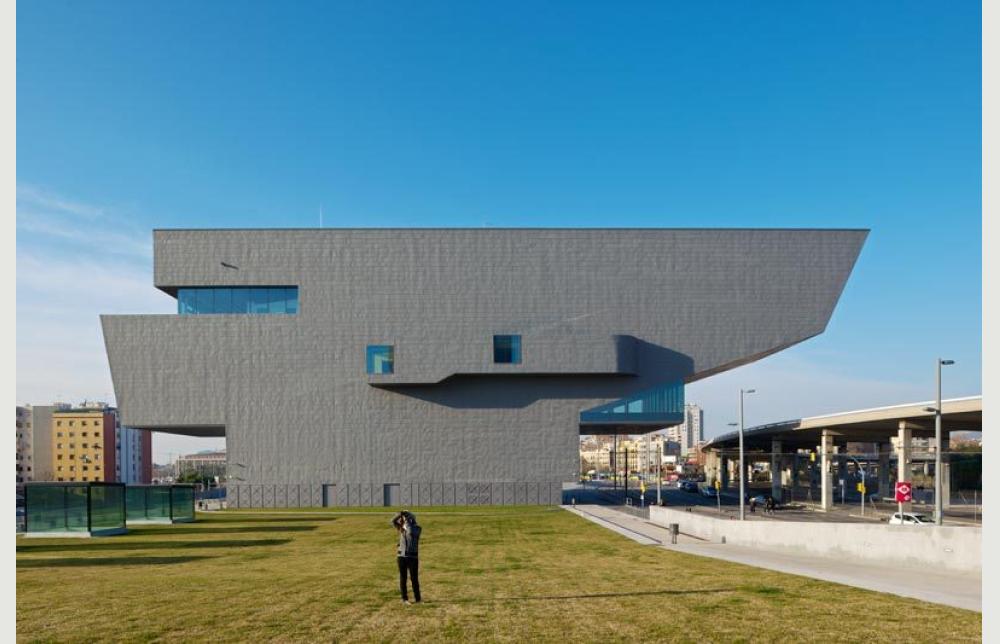 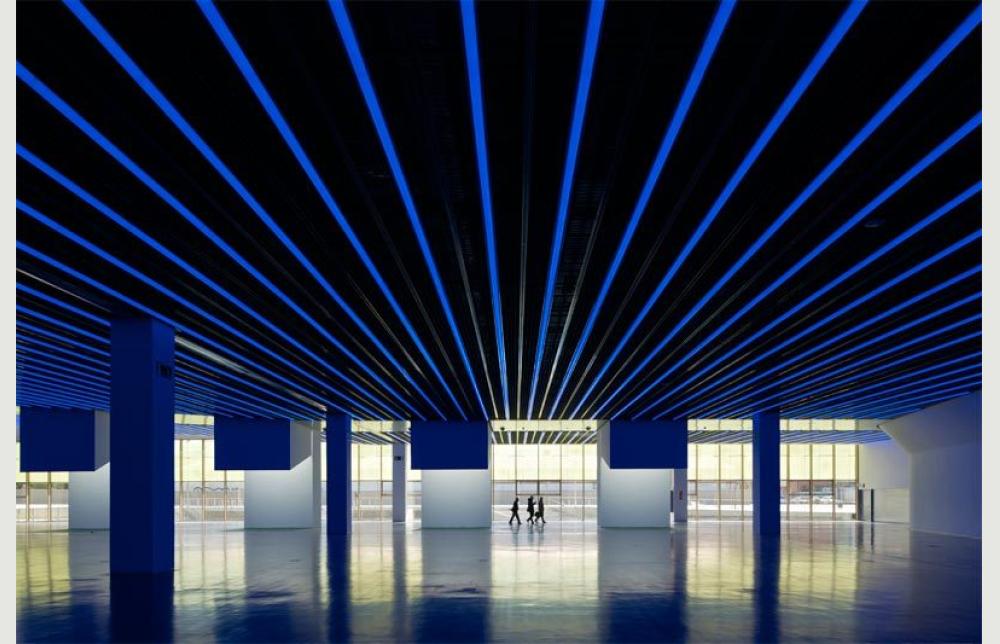 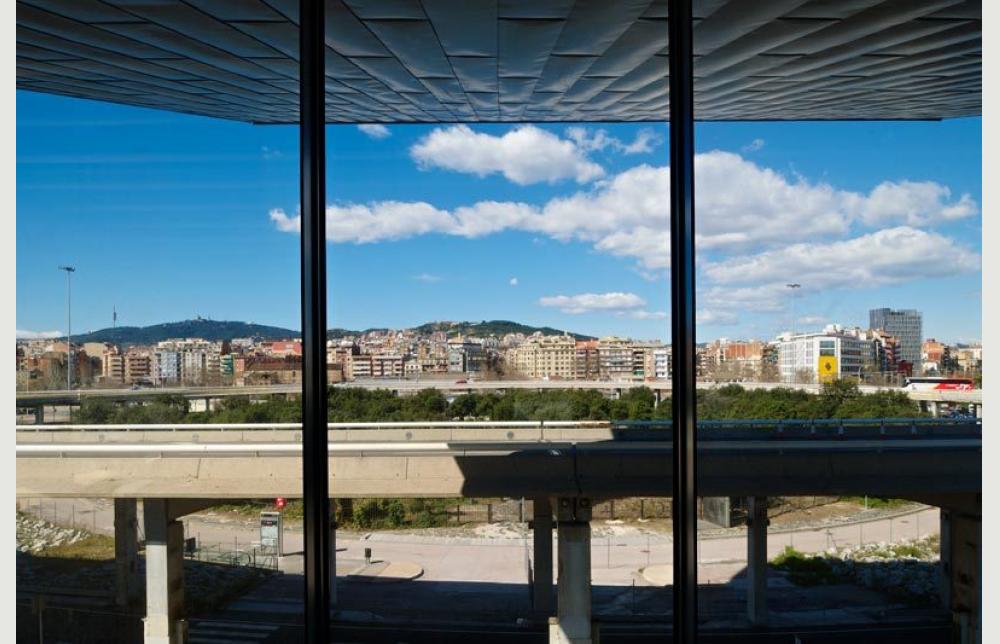 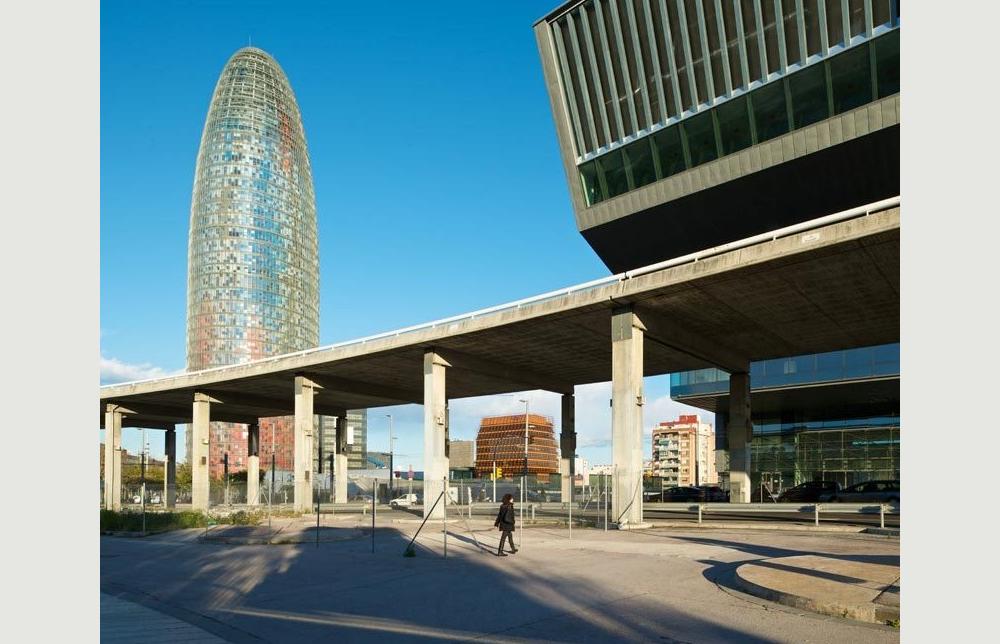 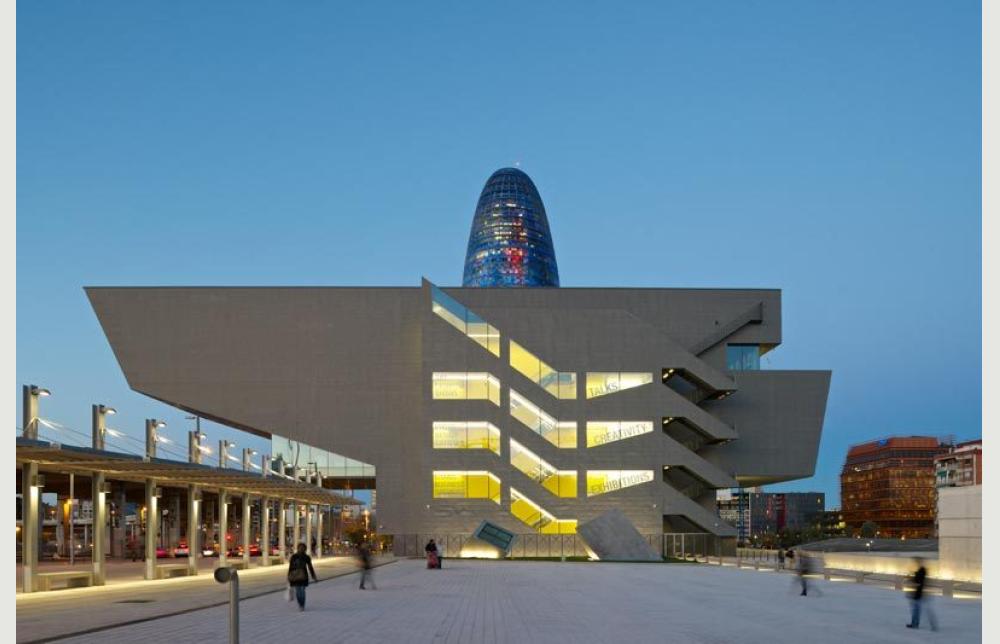 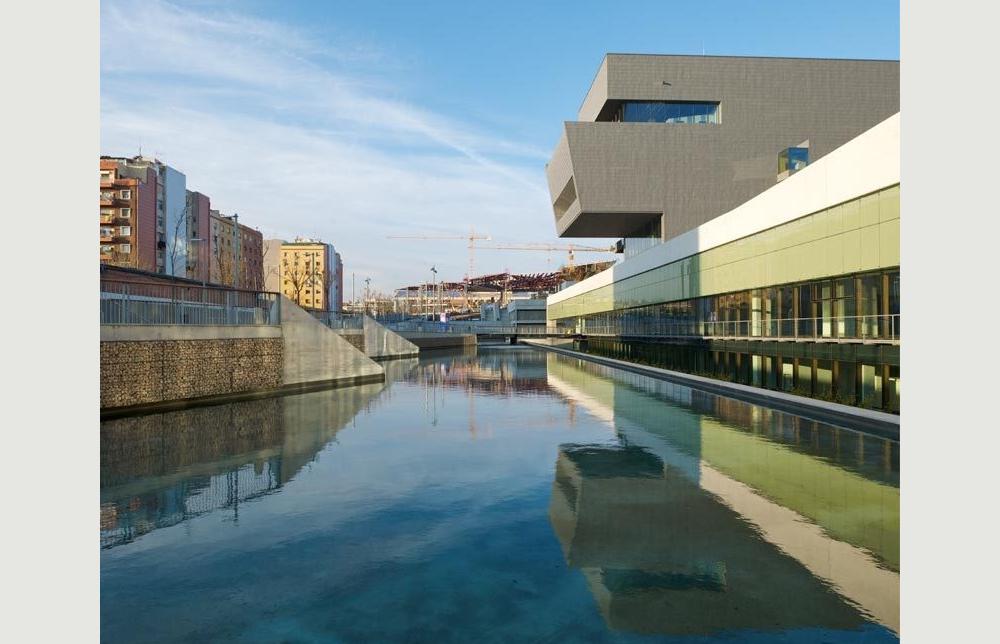 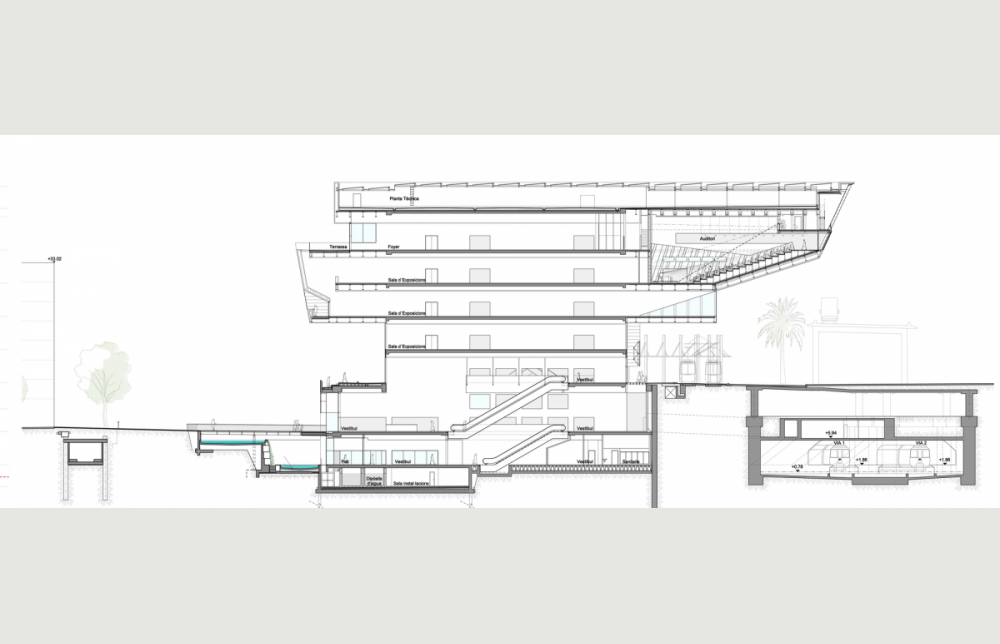 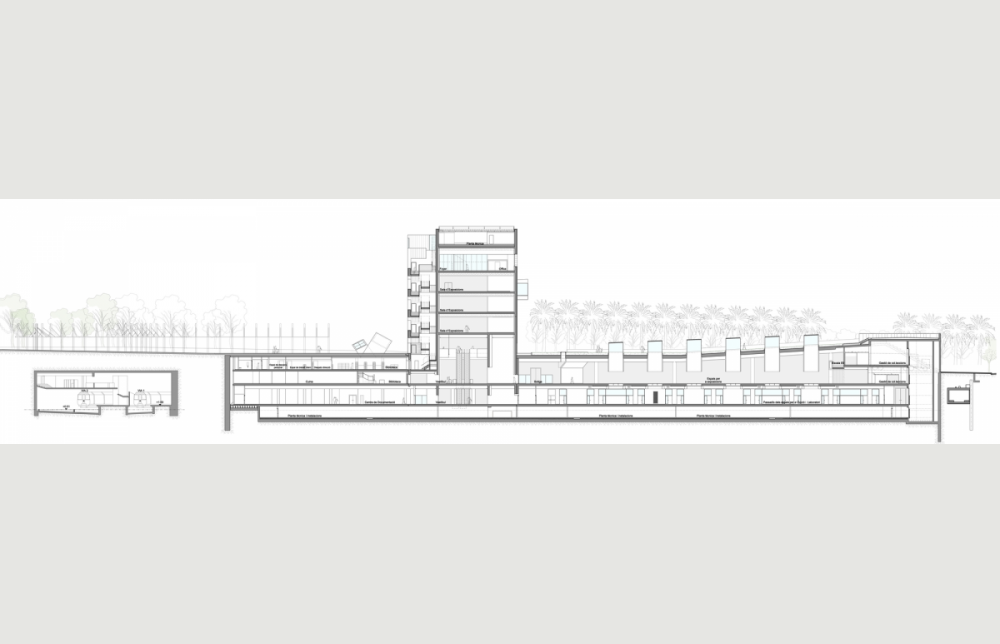 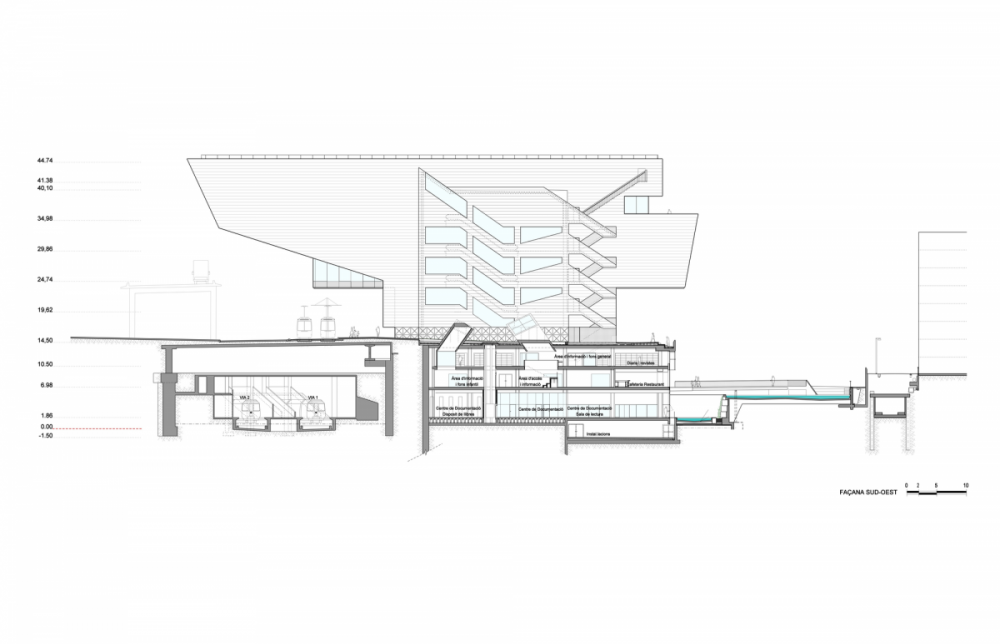 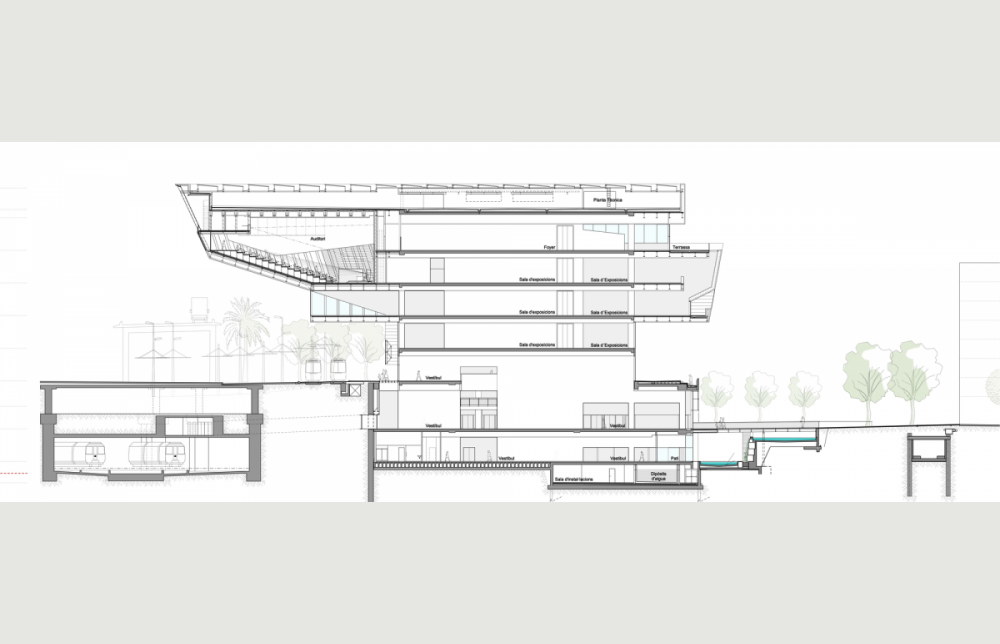 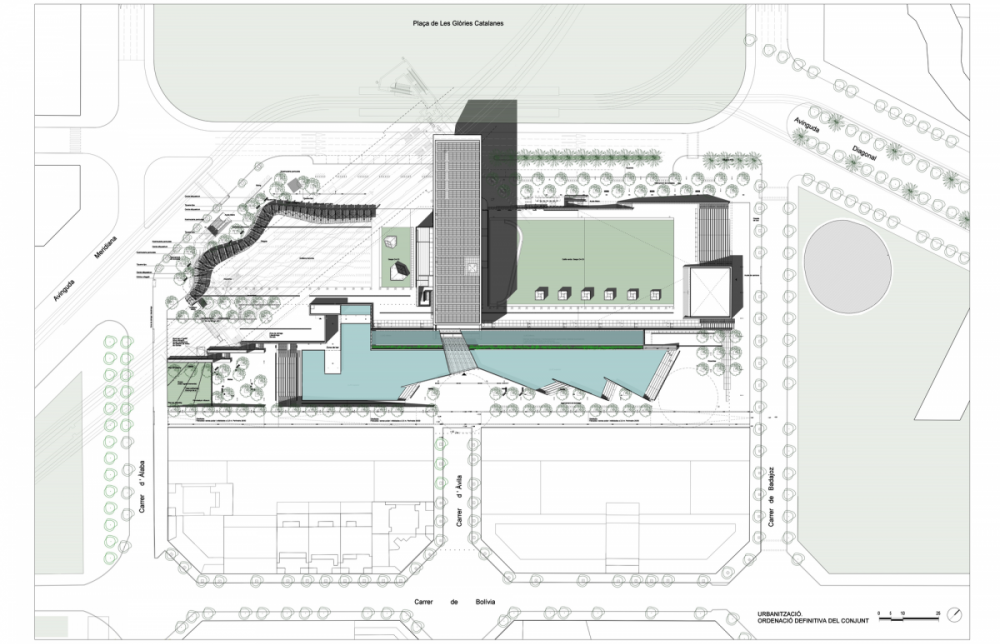 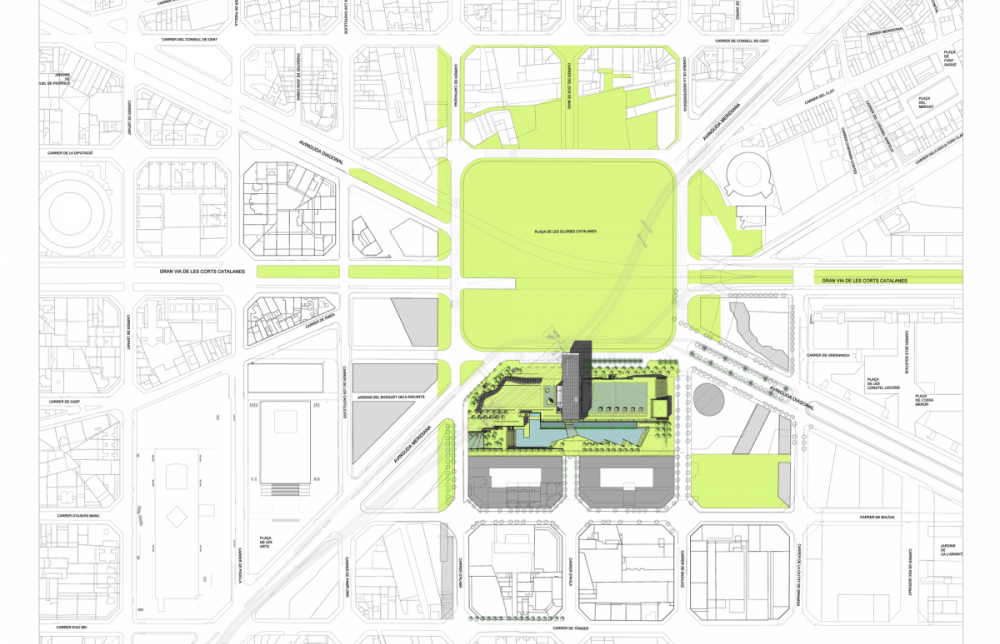 The Barcelona Design Center consists of two parts: one underground (using the level change caused by the urbanization of the plaza de las Glorias), and another that emerges above the level +14.50m. The latter is a parallelepiped cut in sections with the same width as Avila street, so as to work as an indicator of the relationship between the street and the plaza without closing off the views of the large central park. The underground roof has the finishes and use of a public space, thus related with the future project of the plaza de las Glorias. The green carpet is one of the key components and has been achieved with natural elements that ensure sustainability and ease of maintenance. The bright graphics and the pergola complement the urban plaza situated on the other side of the building, next to Meridiana Avenue. The bar and restaurant is set at the +6.98m level and functions as an attraction to the public space. The lake is a compositional base that relates the different levels.

The most dense activities are located on two floors and a mezzanine, such as the main exhibition hall, library, research and teaching, great turnout services like the shop, cafeteria, etc. Natural lighting and the relationship with the exterior, despite being a semi-basement, is achieved with the pit produced by the difference in levels, reinforced with the reflecting pool, a kind of large sunken courtyard. This lighting is reinforced with six skylights that emerge in the public space and can be used as showcases for the content and activities of the center. The lower floor is a technical level at foundation level (-1.50m) which contains the various storage rooms and building services.

According to the planning, the building occupies minimum floor area so as not to reduce the space for public use and because the vicissitudes of demolition and change of tram paths do not allow for more space. The building is prolonged as a cantilever to the plaza, and thus allows for the foreseen buildable area, at the same time becoming a sign of architectural urbanity over the circulation lines. The entrance is through a single hall with double access: at level +7m, from Avila street, and at level +14.5m, from the plaza.

This hall is a kind of street or public plaza – or semi public – which relates the plaza de las Glorias, the Poblenou, the metro station and the possible exchanger. All the building services in the basement are accessible from this semi-public plaza, and all the upper floors are also accessible through a system of stairs, mechanical stairs and elevators, forming a continuous unit up to the conference room. Only two materials were used in the exterior of the building, metal plates (pre-weathered QUARTZ-ZINC zinc, aluminum and cast iron), and glass, so that together, they have an industrial look.

Public access to the building is through the lobby located on the extension of Avila street. This lobby is accessed from two points located at different levels: from the plaza de las Glorias (level 14,50) and from the green area at the end of Avila street (level 6,98). This lobby is linked to the exterior terrace through the cafeteria. We also foresee, when circumstances permit, to communicate the lobby with the de Glories metro station.

There are two service entrances. The first is located on Badajoz street. This entrance is intended for loading and unloading expository material. For this reason, we have provided a large space suitable for parking two trucks and a loading dock. The second entrance is located in the plaza, between the building and Alava street. We expect that this access will be used by the cafeteria personnel, restaurant, and public library, and also serves as service entrance for these areas. The building has the emergency exits required laid out throughout its perimeter.

The Institut Catala d’Energia (ICAEN) has given the building the energy rating A. Barcelona Design Center deserves its own chapter due to its compositional, urban and functional importance. We should indicate its participation in the design of a quality public space, with the possibility of opening a facade that makes the basement space comfortable, the revitalization of the entire sector by offering a leisure area nearby with a space that shows some aspects of design.