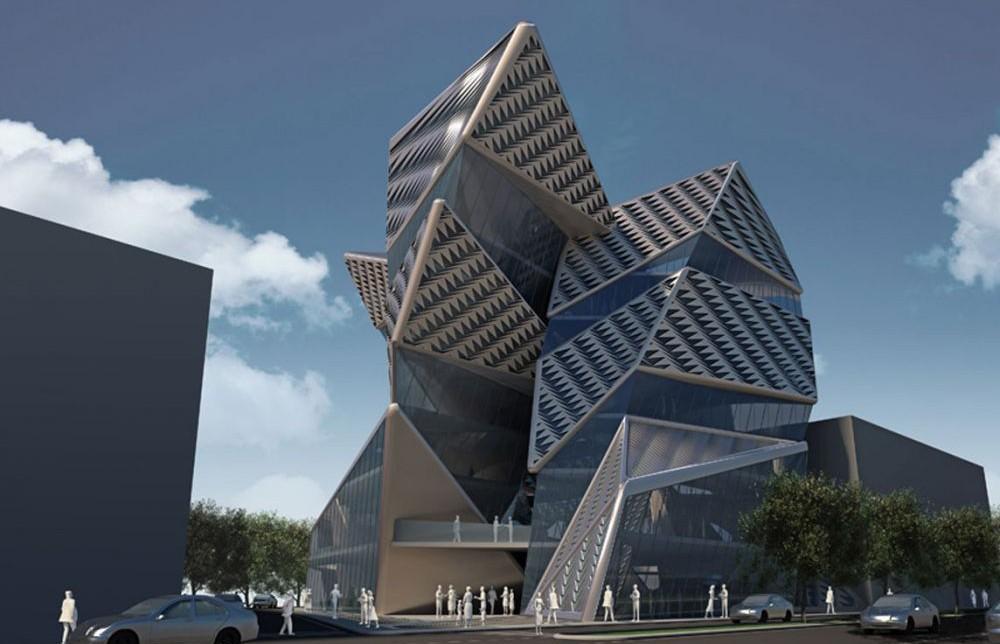 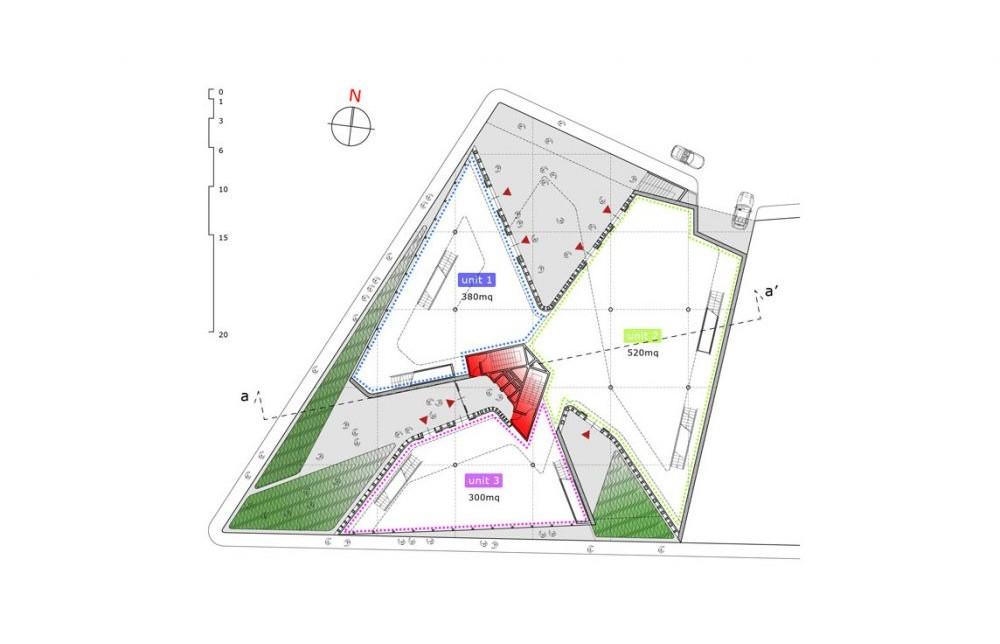 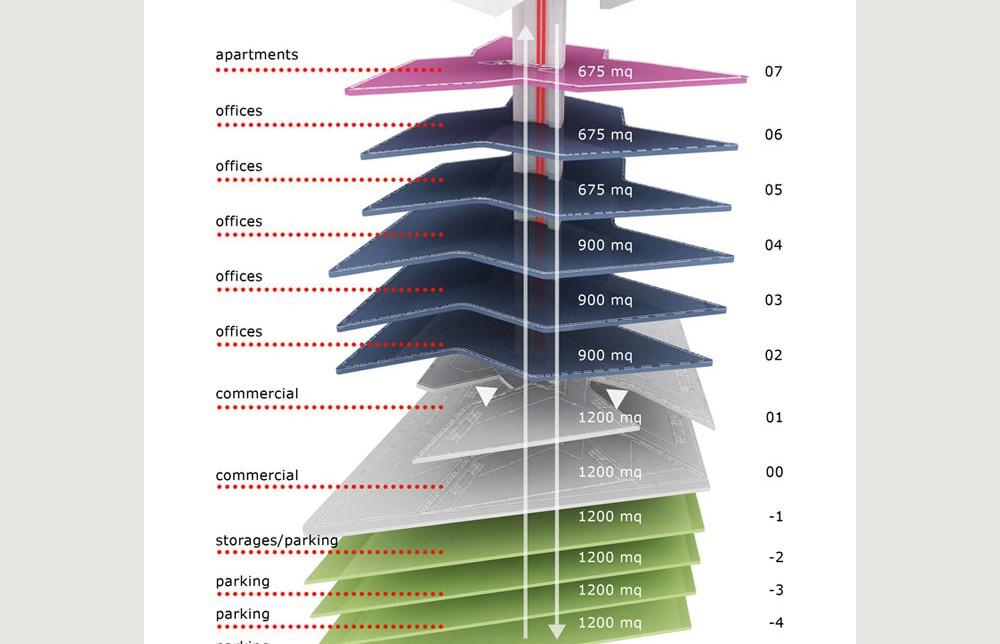 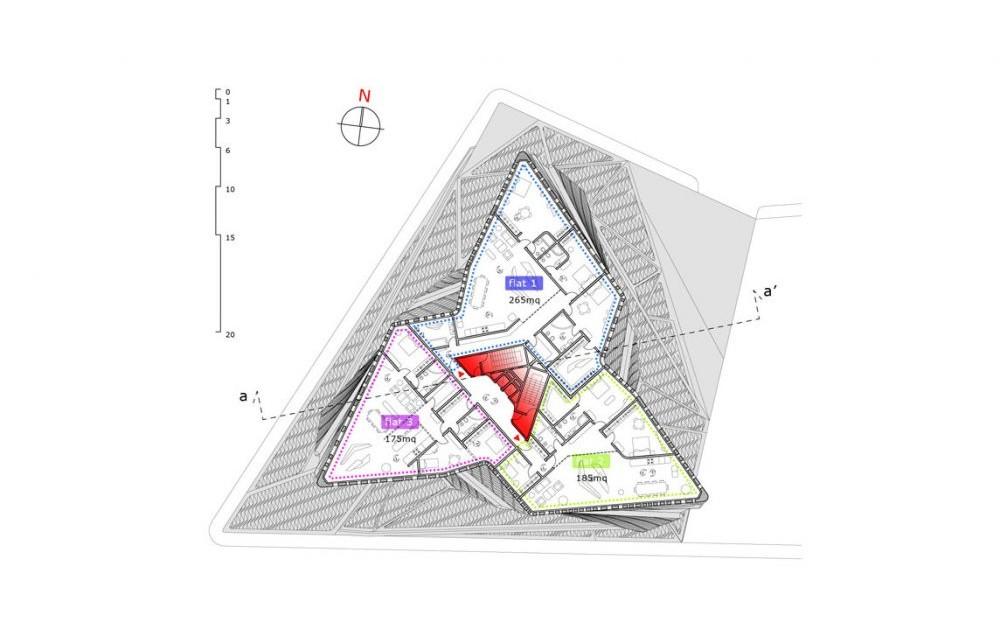 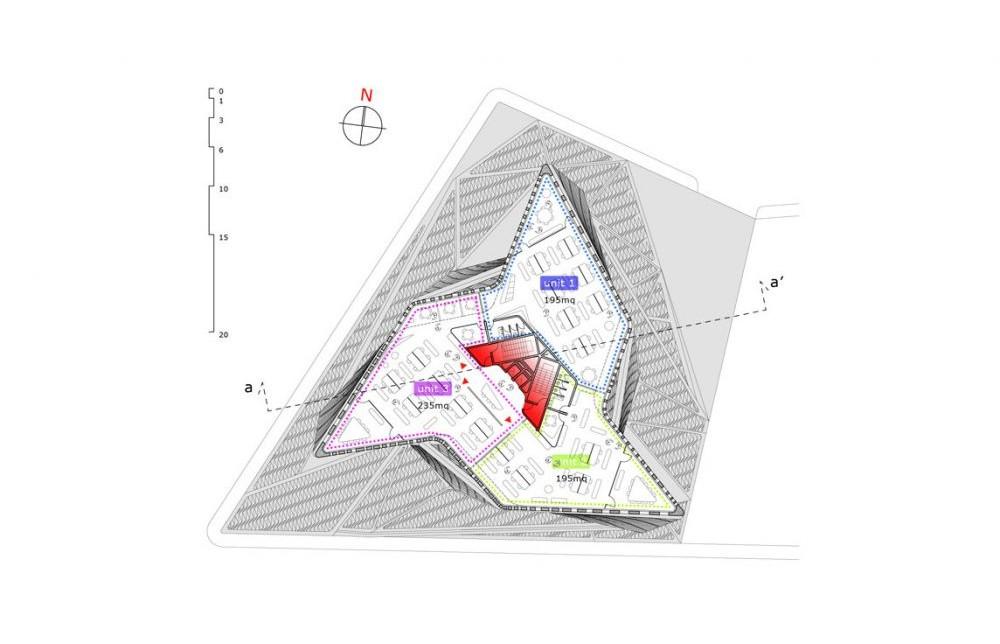 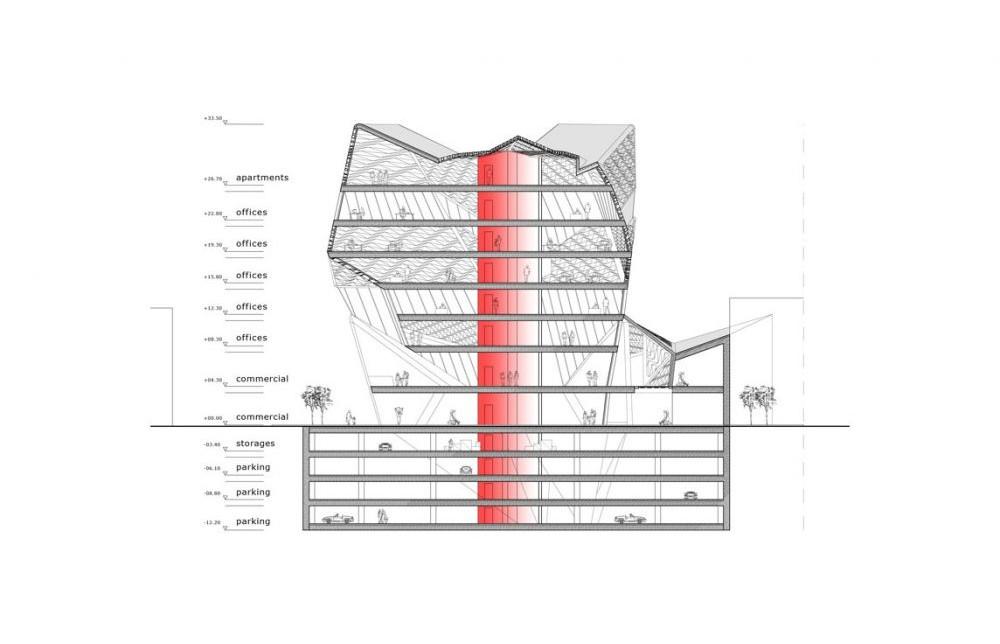 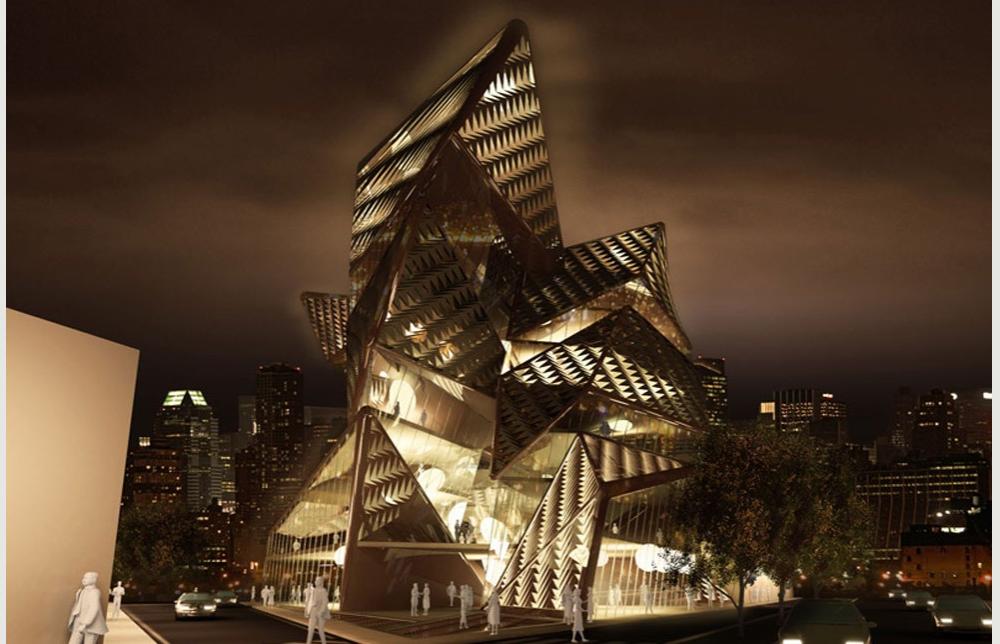 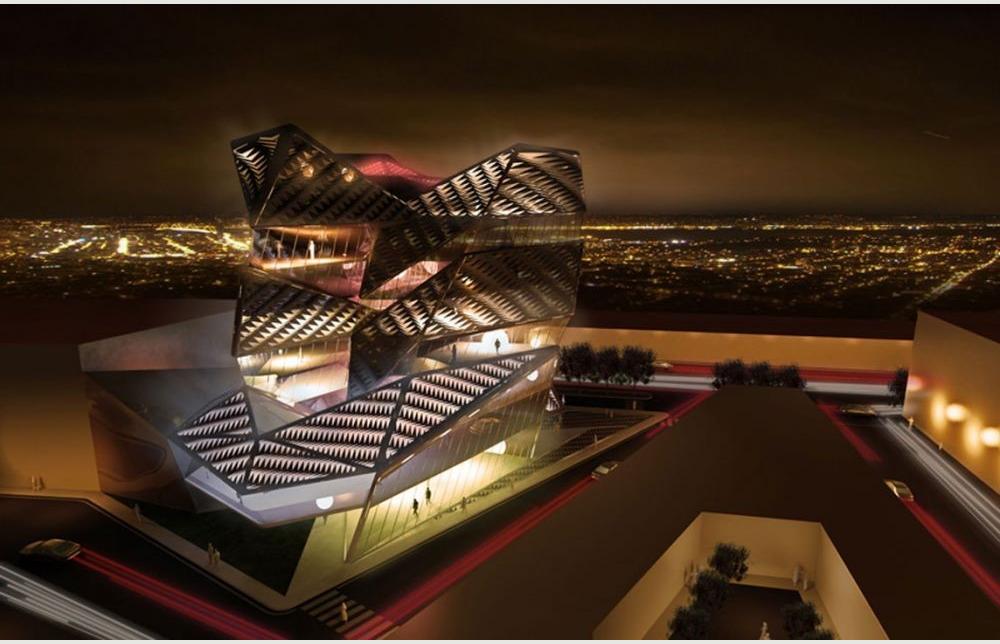 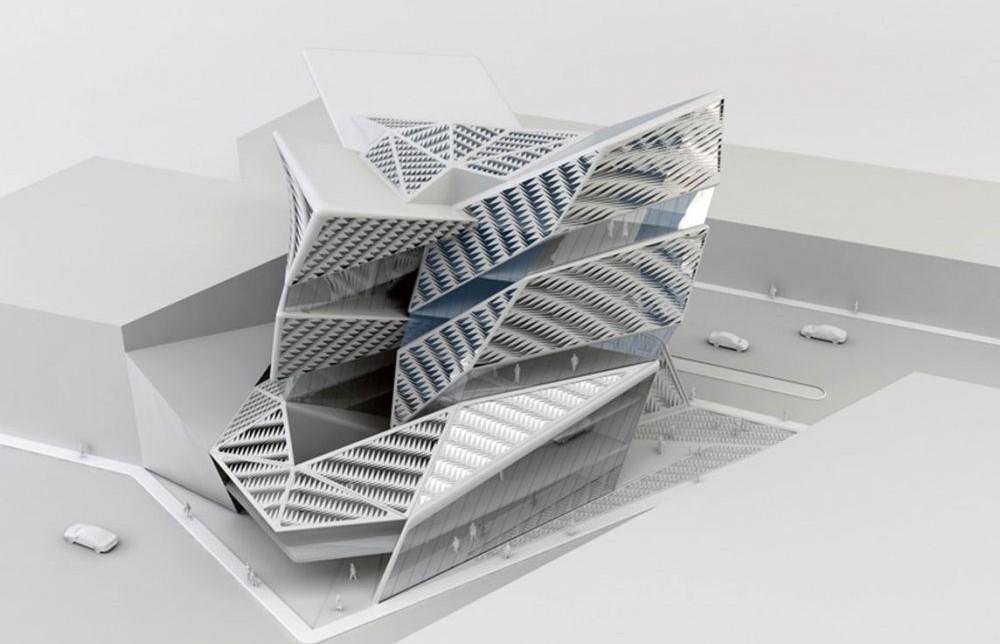 AquiliAlbergs design proposal is rooted in this tradition, repeating a process already seen and tested in the historical monuments of the city of Tehran, where the two-dimensional symbol is evolving in a third-dimensional volume.
After all what process could be better adapted to the new headquarters of Benetton if not the evolution of the texture of a fabric in a building, representative for the group itself?
The theme of the contest is then interpreted through the inclusion of three new volumes that are identical to each other, rotated and merged into a single volume.
The dynamic pattern wraps the form at all levels of scale in a single rotating gesture, following the morphological evolution. Its upward momentum reveals the rotation as a design consequence for interacting with the whole city surrounding.

Laura Aquili Ergian Alberg, have worked in Amsterdam, Rotterdam, Rome, London and Beijing for different internationally recognized offices: Zaha Hadid, OMA, UNStudio, ONL and Fuksas, where they have been responsible for different scale projects, from product design to architecture.
In 2006 they founded in Milan the AquiliAlberg studio, where they work on architecture, design and graphics with an experimental and innovative approach, combining their multidisciplinary experience gained from abroad, with their background rooted in graphics and the arts.

In 2006 they designed the new prestigious Christies auction house headquarters, new offices in Milan and the new layout for auctions of Milan and Rome.

The side-table Vertigo, marks the beginning of the collaboration with Moroso in 2007.

The studio completed in 2009 an housing project in Cremona and recently they have been the appointed architects for an ambitious touristic harbour in Jesolo.

Also, 2009 saw their first installation and graphics project for the Triennale di Milano. The exhibition “The fragile city, curated by sociologist Aldo Bonomi, was staged successfully in the prestigious location in Viale Alemagna.

The first project in the fashion world marks the collaboration with designer Neil Barrett for which they have designed the backdrop of the fashion show in Milan, AW2010.

Their clients include, Moroso, Corian, Serralunga, Ritzenhoff and Fiam.

They write about Emotional, digital and technological cross-pollination between design, art and architecture in their blog, Des-art-chitecture, for the NOVA100 on-line newspaper, powered by Il Sole 24 Ore.

Work of AquiliAlberg has been published and exhibited worldwide.