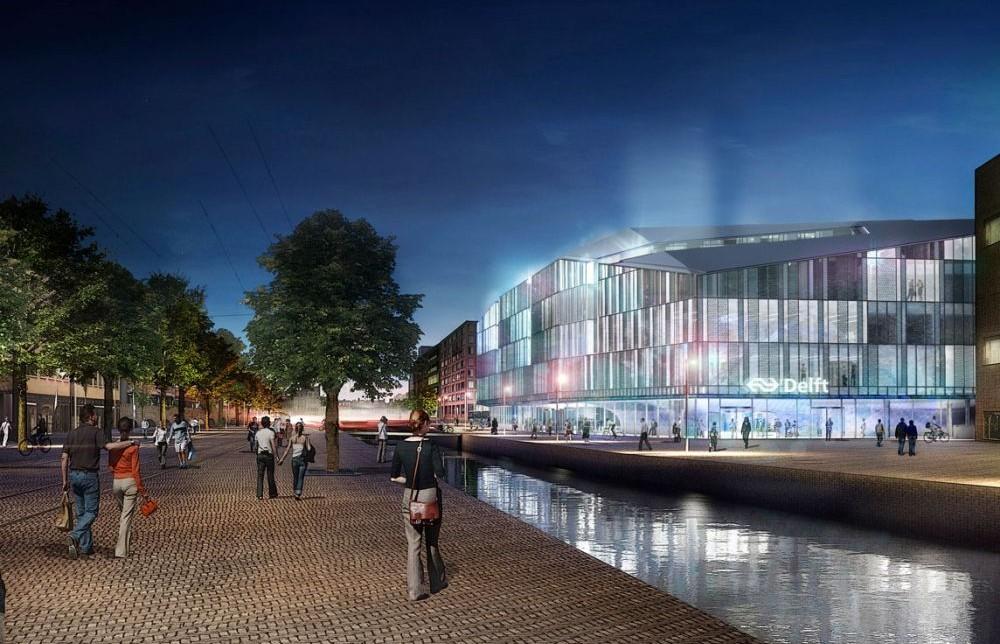 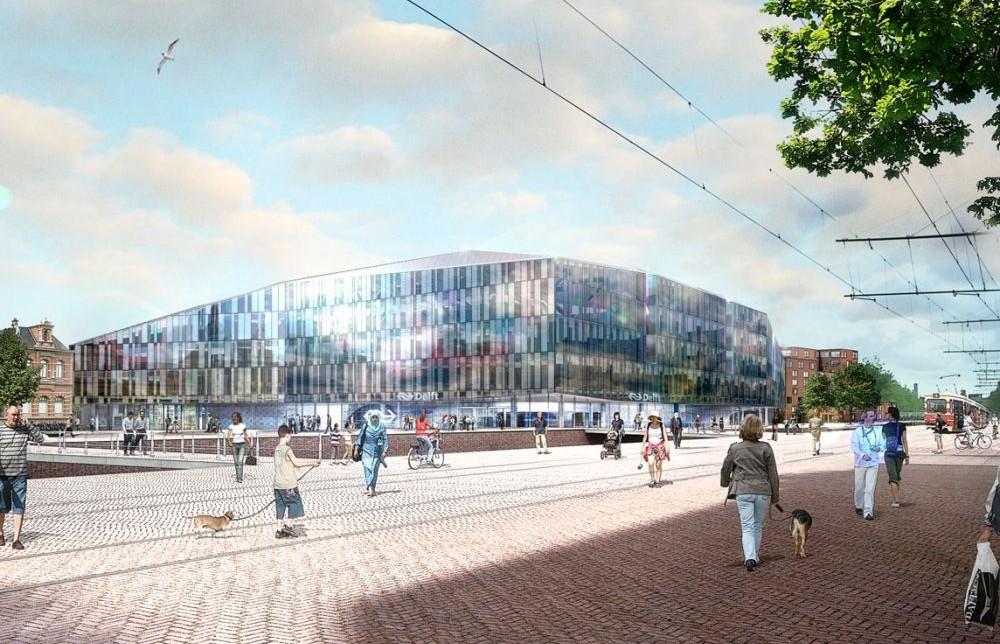 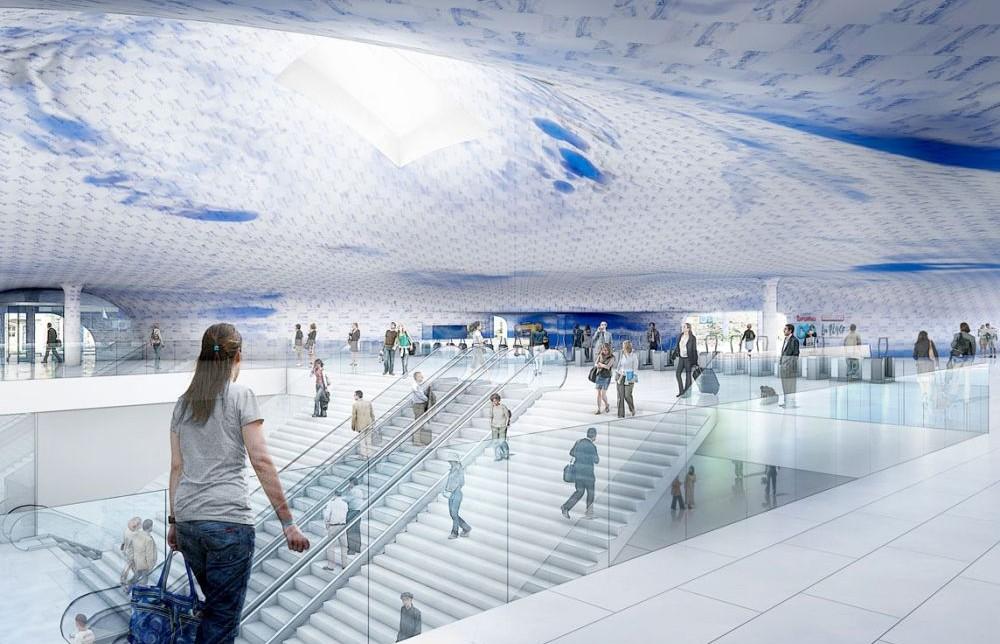 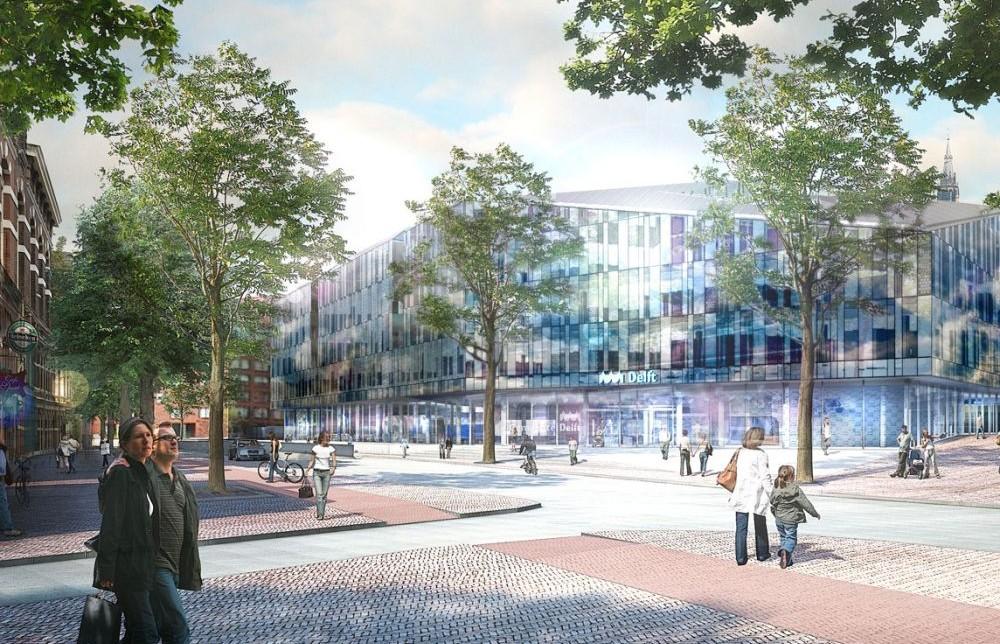 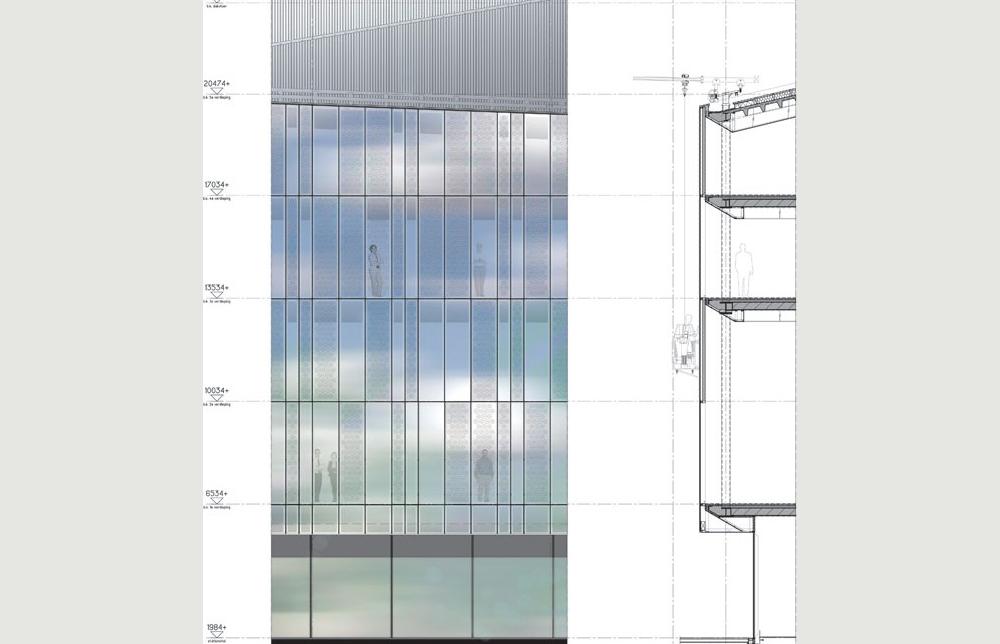 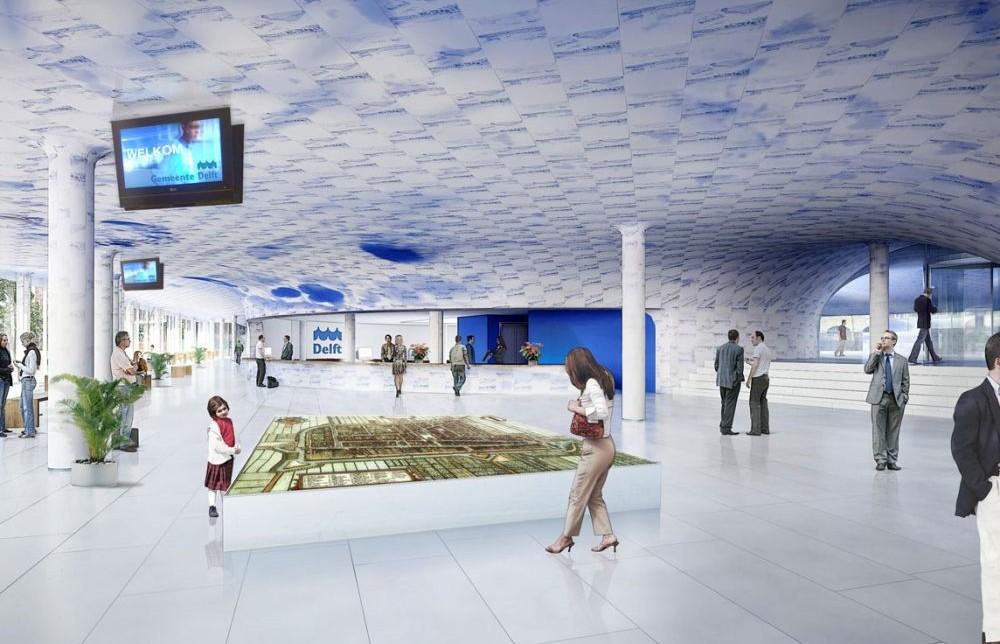 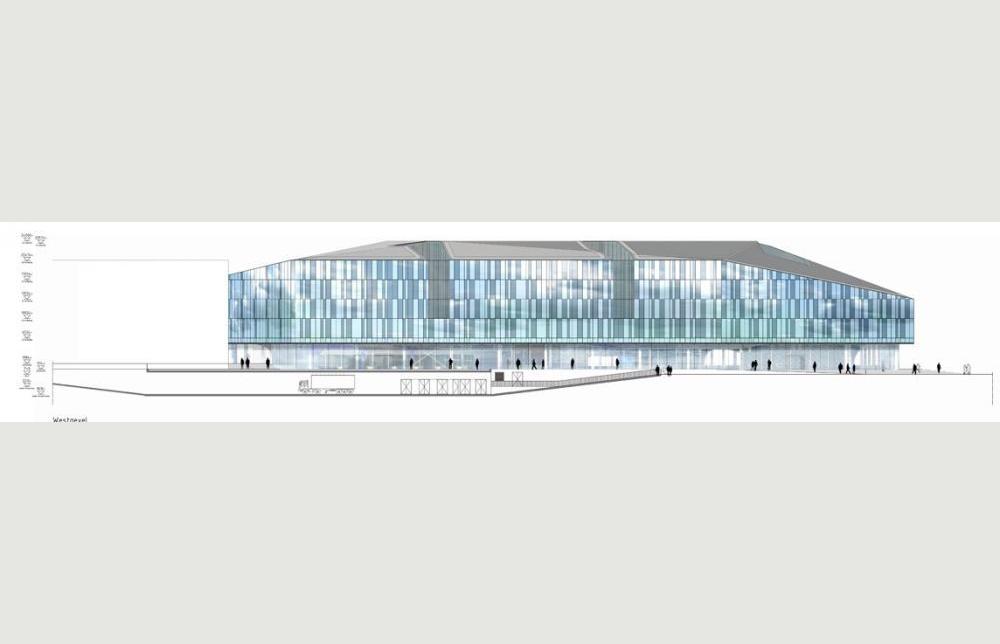 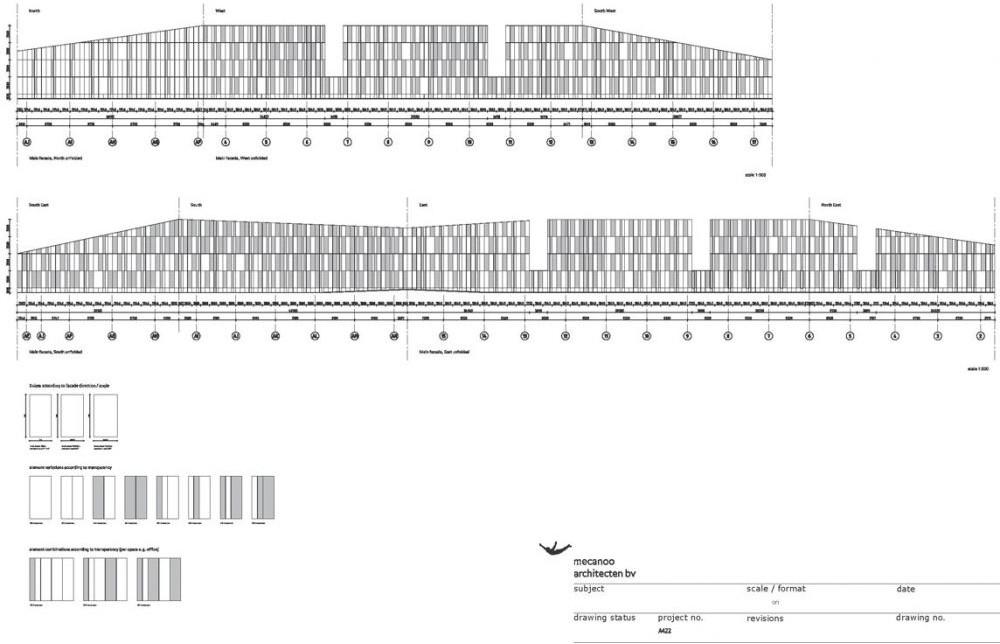 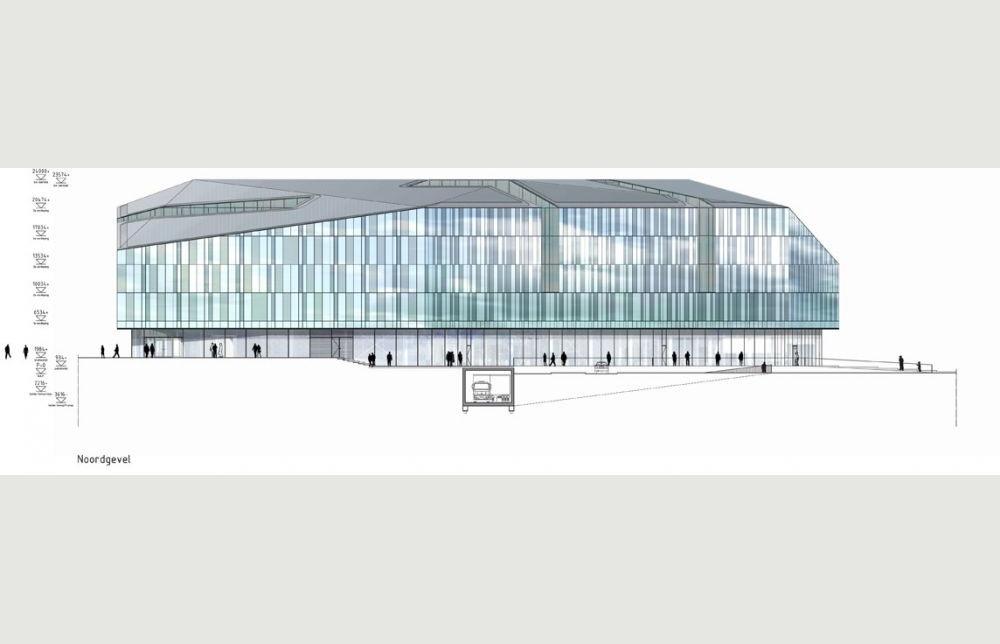 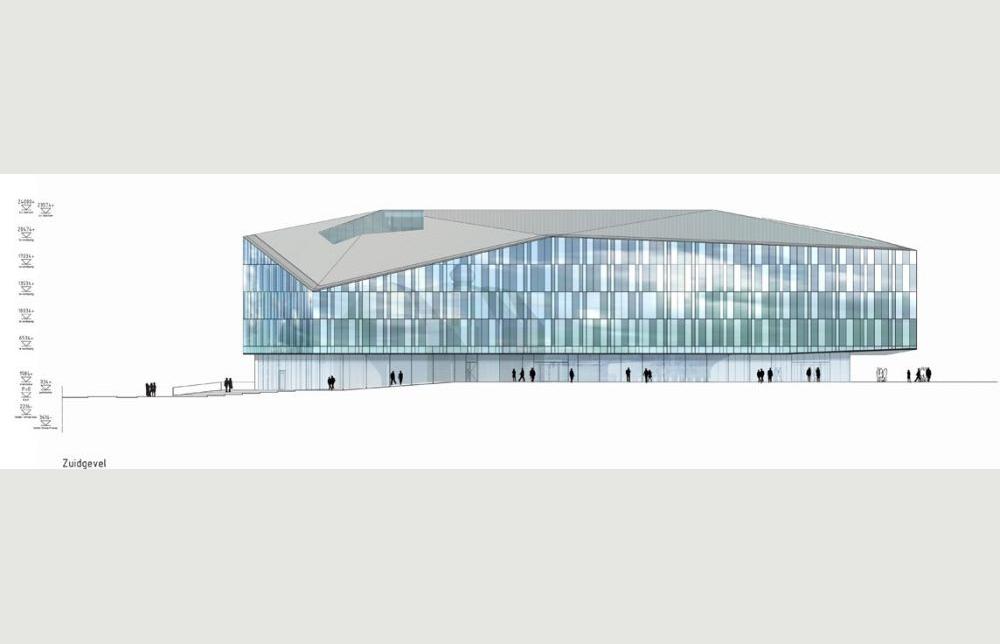 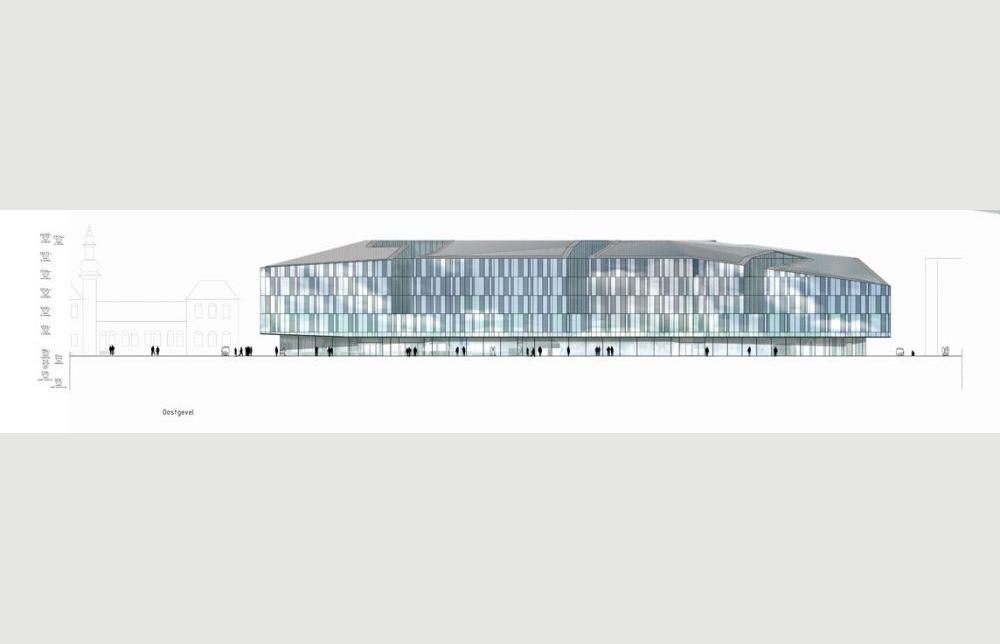 Interweaving of future and past
In the city centre of Delft runs a railway viaduct that divides the city in two. The planned construction of a railway tunnel will remove this barrier. In its stead will be an expansion of the inner city including a park and a promenade. A station foyer in combination with offices for a thousand municipal employees will be built on top of an underground railway station. The inner city of Delft reflects its past. The campus of the Delft University of Technology on the edge of the inner city holds the promise of future development. The starting point for Mecanoos design is an interweaving of this history and the future. The result is a building where each elevation is designed in relationship to its context. The building is compact and its design is contextually articulated on each of its facades. By fracturing the volume and lowering the gutter, the building exhibits its more urban front to the Westvest and appears smaller in scale from Westerkwartier. The roofline has been lowered at the corners to create a gradual transition toward the existing buildings while showing the lovely shape of the roof.

Delft Blue
The glass skin of the city hall reflects the Dutch skies of Vermeer and also makes the building transparent. A pattern of diagonals within the faade creates a diamond like appearance. Incisions in the glass volume form a pattern of alleyways inspired by the intricate structure of streets in Old Delft. The horizontal division of the building – with a plinth of clear glass and raised office landscape of the municipal offices – provides a clear distinction between public and private. On the first floor lay multifunctional spaces, a restaurant, conference rooms and rooms for the Mayor and the Alderman. A vaulted ceiling, featuring scenes in Delft Blue ceramics, connects the city hall and the station hall. By creating transparency on the ground floor, interior and exterior intertwine with the citys daily life. The station hall and city hall are subtly separated by a glass wall and two volumes with public counters, front office, interview rooms, stairways and elevators to the upper offices, commercial facilities and sanitary facilities. The positioning of the amenities affords travelers a city view from the station foyer. On the facade, a digital news ticker marks the flowing lines of the building interior and illuminates the plinth at night. On this news ticker, actual information can be read about public transportation, activities and news about the city of Delft.

Energy efficiency
Designed for maximum energy efficiency, the building uses 35 less energy than government standards. The building complex is designed for durability and flexibility. The GreenCalc score is aimed to reach 300. Office floors have an efficient grid of columns and beams that allow for maximum flexibility and adaptability. The building is accessible through an interior alley which links the office wings, also available for third party lease. An induction system heats and cools the building interior. The waste heat is then re-used through a heat wheel. Thermal storage is used to heat and cool the building and depending on the orientation of the sun and building. The heat load from the data centre is stored thermally. The glass facades can be separately opened or closed for personal comfort. Solar panels on the roof provide 20 of the building mechanics and lighting electricity load. Lighting throughout the building is presence aware.

Programme: Municipal offices with public lobby of 30,000 m2; station with shops, ticket office and restaurants in the station hall and underground platforms of 4,500 m2