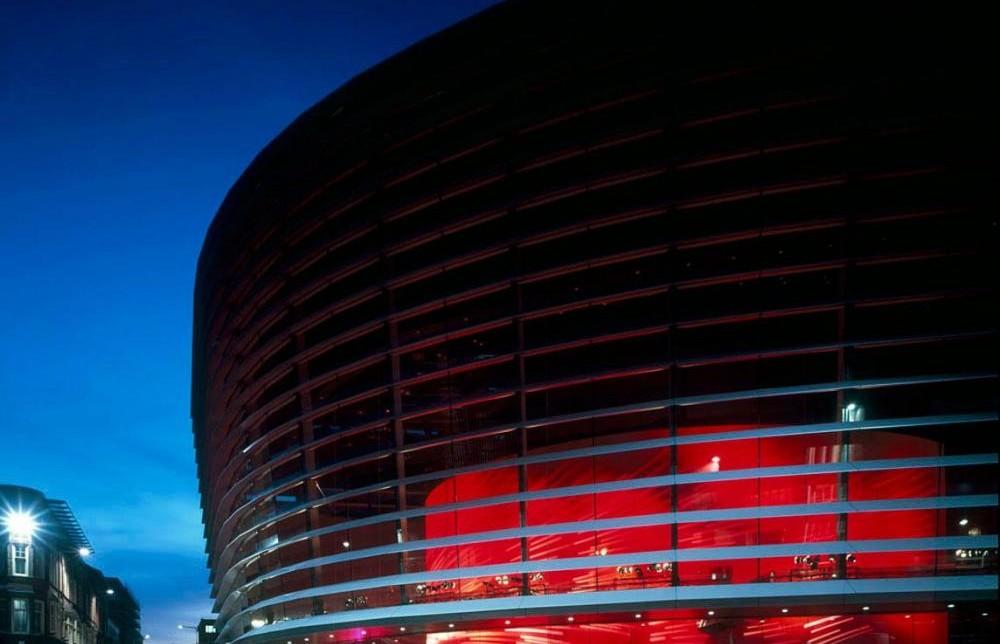 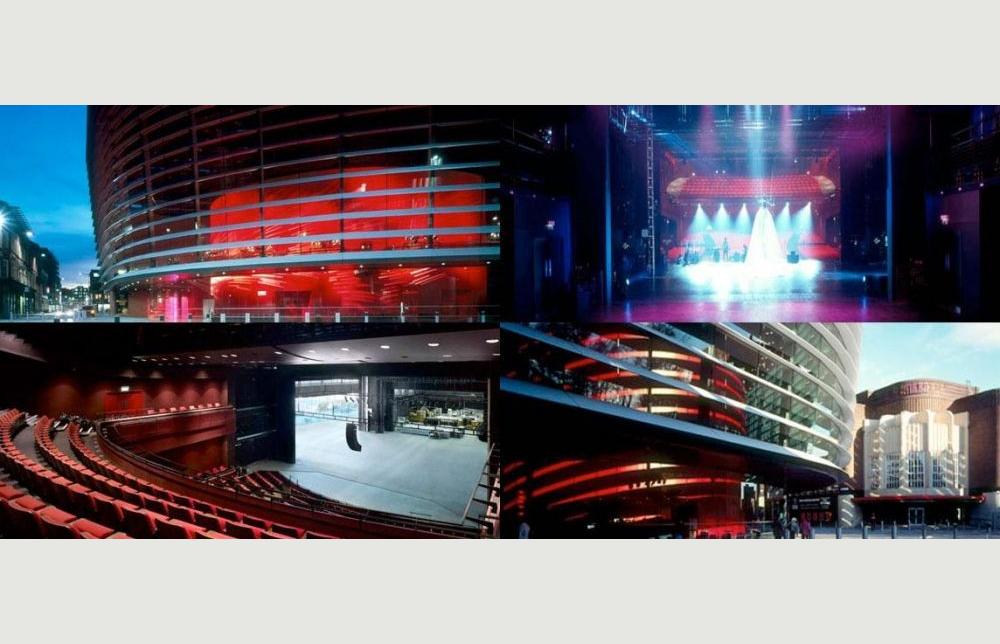 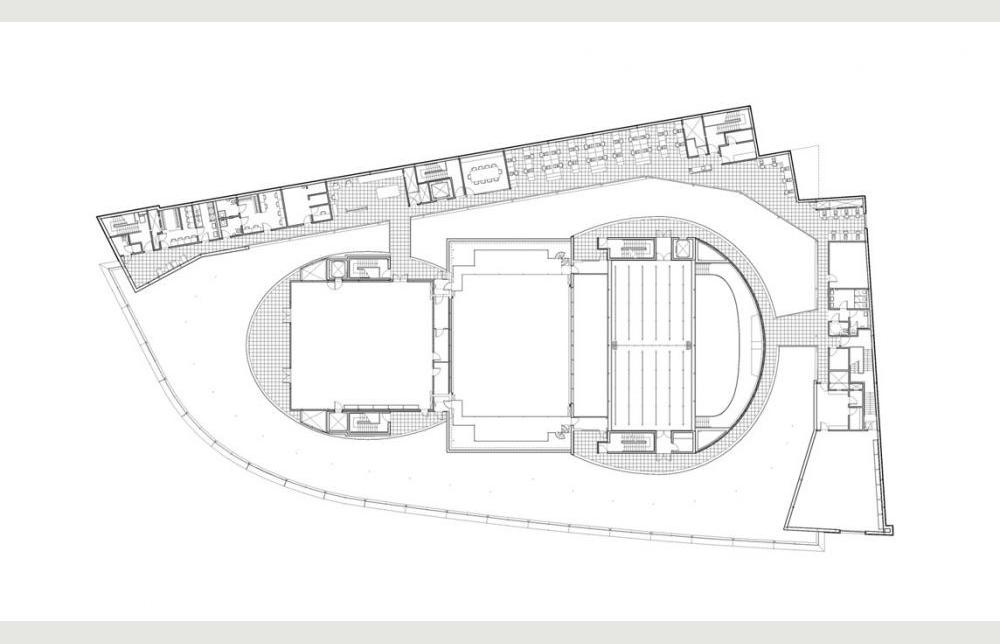 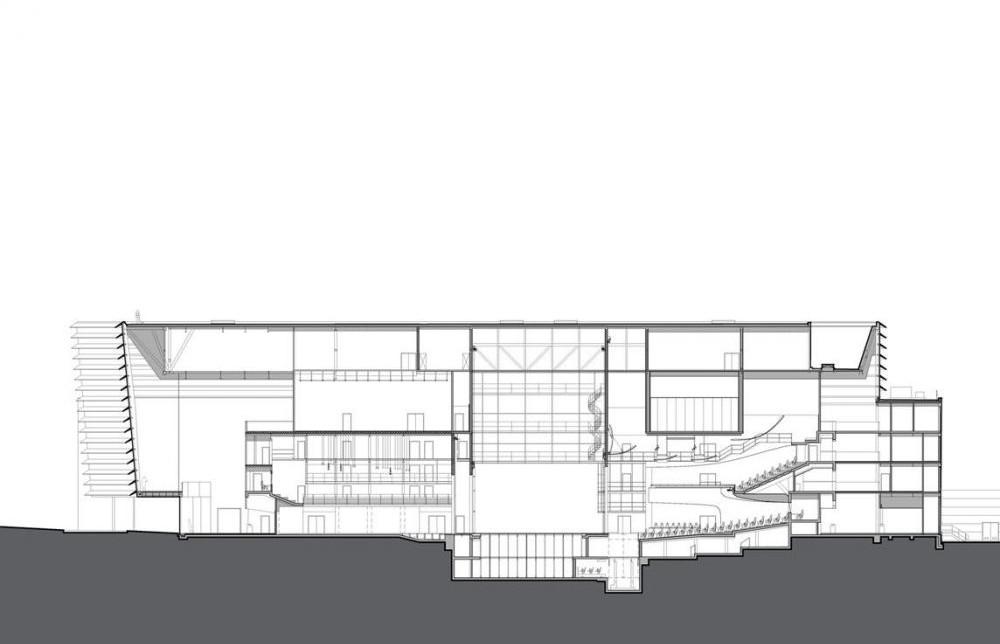 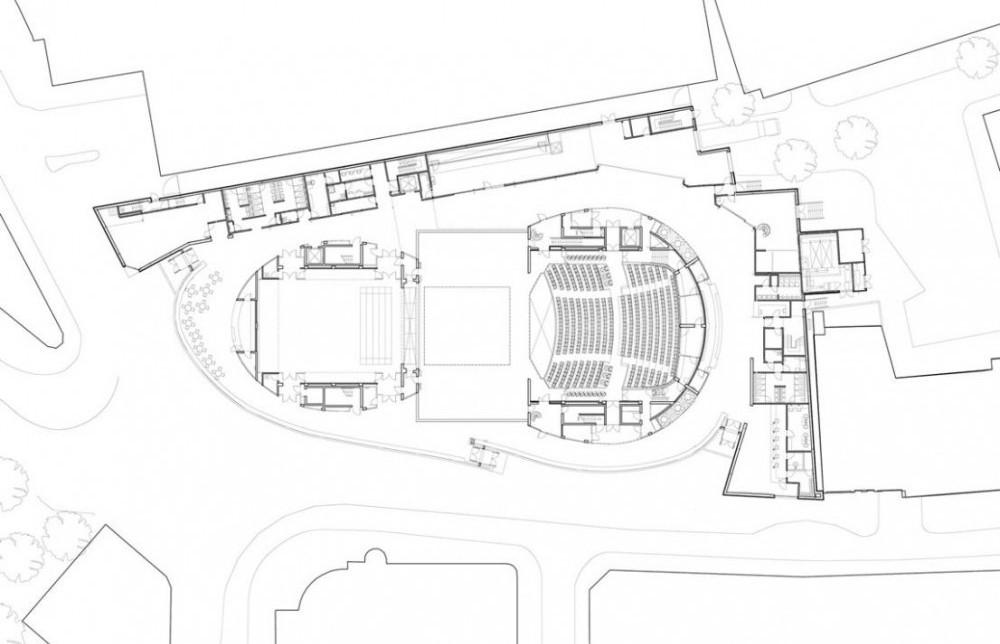 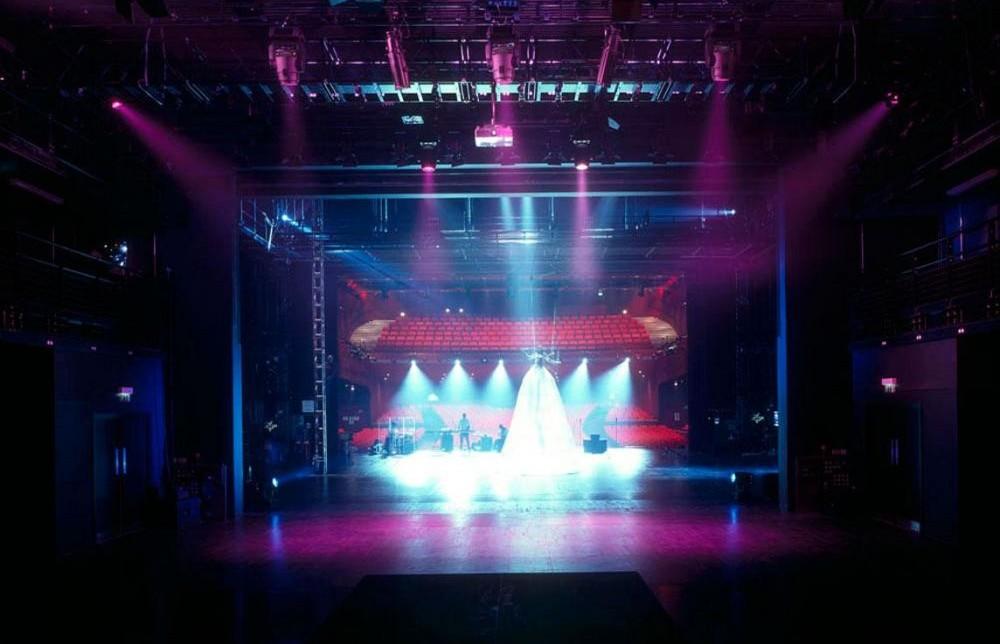 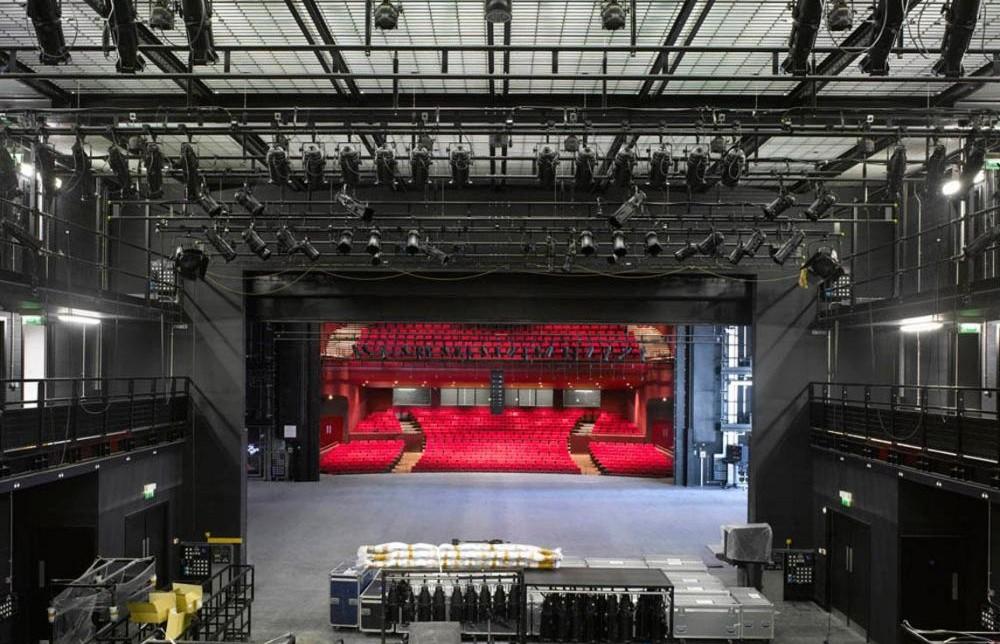 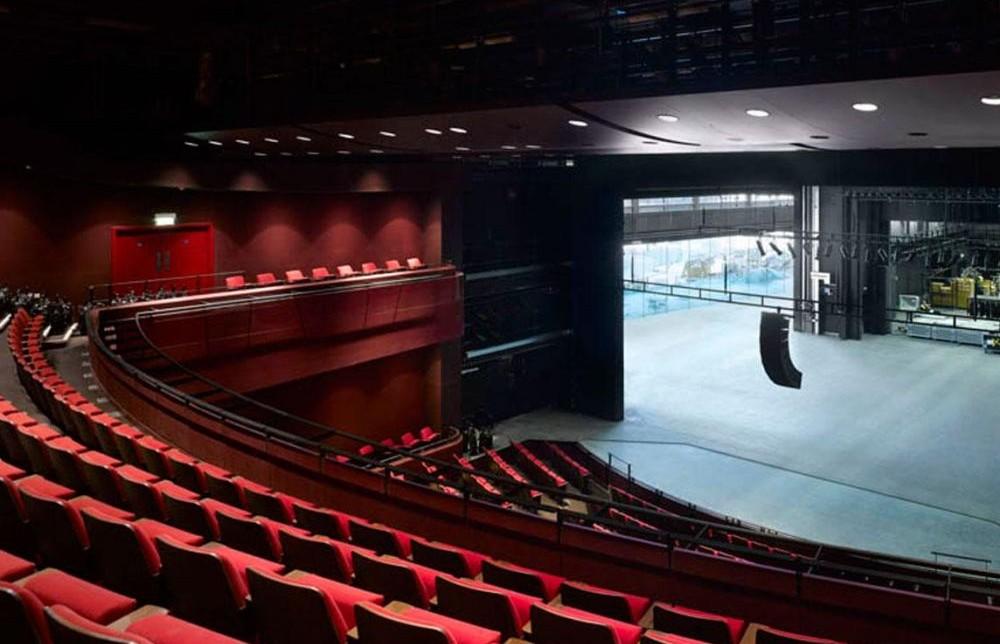 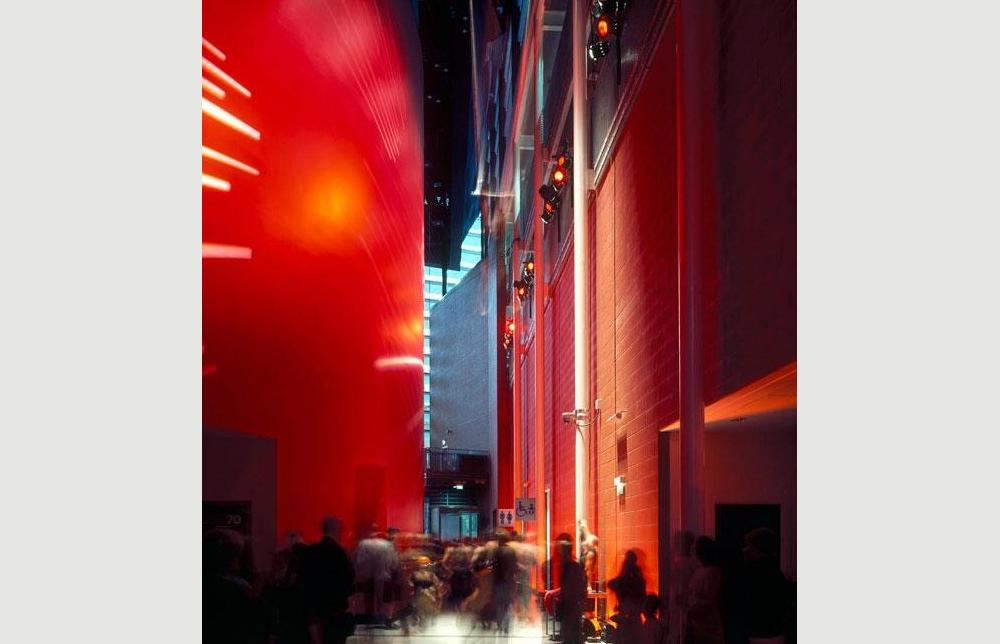 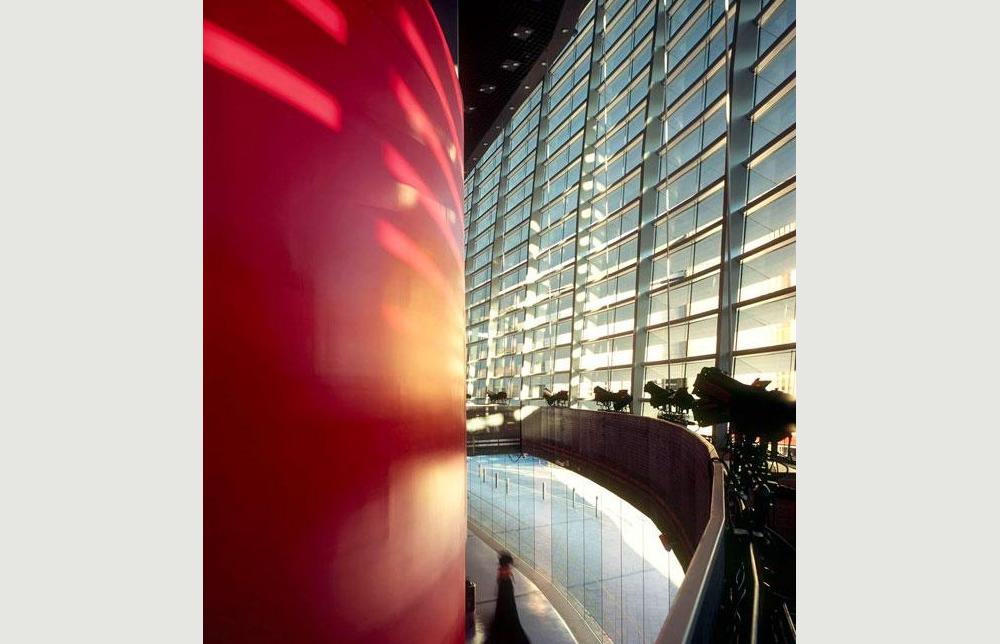 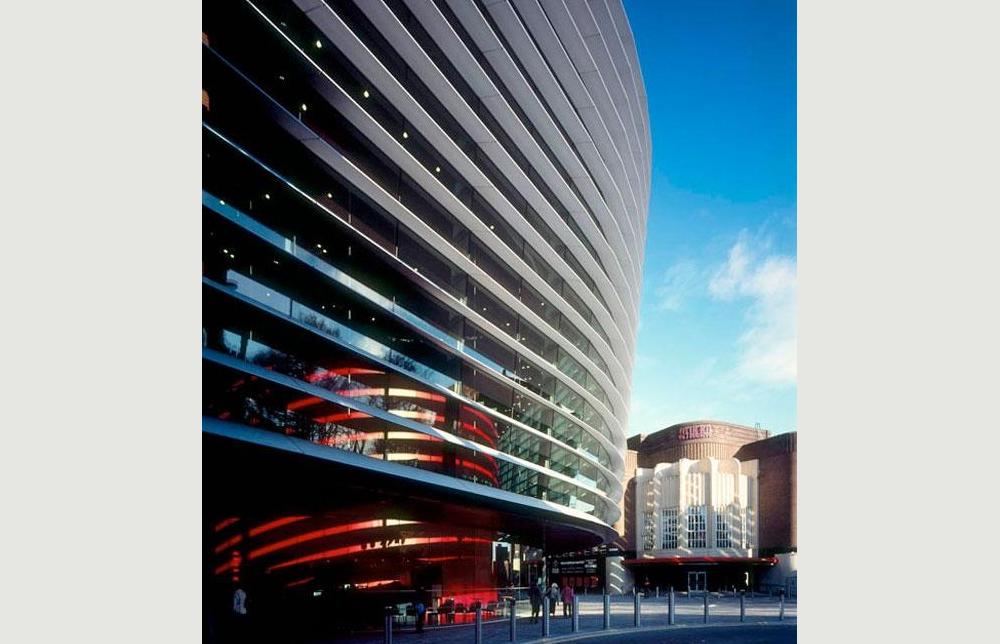 As an anchor for redevelopment of the St. George’s Conservation Area in downtown Leicester, Curve seeks to engage with the life of the communit. Rafael Vinoly Architects PC thus turned the typical theater configuration “inside out”, exposing the production, construction, craft and technical components of the building to the public, and integrated the performance into the life of the city itself.

The design accomplishes this with a four-story glazed curtain wall that reveals the two main performance venues, the 750-seat main theater and the 350-seat black box theater, situated on opposite sides of the main stage and surrounded by the public ground-floor lobby. The stage, lobby, and sidewalk are all at the same level, with ample visual connections among them, making the theatrical performance an extension of activity on the street. Metal shutters open the stage to either of the theaters, to both theaters at once, or to the lobby, allowing a wide variety of performancy configurations to meet the community’s diverse cultural needs.

No distinction is made between front and back-of-house, because the stage itself can be made part of the lobby and circulation. Situated at ground level across the main lobby from the stage, double-height workshops and production spaces feature glass walls that expose production activities and make them a visible part of the performance.

Curve is a theater turned “inside out”, where production, construction, craft, and technical components are exposed to public view and integrated into the experience fo the street. By dissolving the distinction between production and performance, the building iextends the theatrical arts into the public realm and makes them more accessible.

Four metal shutters that rise into the overhead fly space are used to open the stage to either of the two adjoining thetaters, to both theaters at once, or even to the lobby and street, allowing a wide variety of performance configurations to meet the diverse cultural needs of the community. Traditionally-weighted proscenium shutters face the theaters, and moveable side walls control visibility to the lobby and street; each shutter is paneled on both sides for fire insulation and acoustic control.

The lobby is conceived of as another performance site, one that can be sued in conjunction with or separately from the main stage, with all the necessary lighting and sound equipment hung from the balustrade of the second-floor balcony that rings the facility just inside the glass curtain wall. The balcony provides another vantage point for watching such “out-of-the-box” performances, or functions simply as a platform for viewing the city. Acoustic properties inherent to double-layer construction of the glass curtain wall shield lobby performances from street noise.

While the curved southeastern face is a louvered glass curtain wall, four-story bar buildings form Curve’s west and north elevations, which obscure a National Car Park (NCP) Struction to the west and which materially coordinate with historic buildings to the north along Rutland Street. These rectangular volumes house administrative offices, production facilities, dressing rooms, rehearsal spaces, the box office, a recording studio, a kitchen, and various other storage and support needs. Circulation balconies at upper levels overlook the foyer and allow physical and visual connections between staff, performers, and the audience that activate a dramatic engaging public space. The black-box and main theaters are painted red and purple, respectively, to further enliven the foyer.

Public circulation is concentrated primarily on the main floor at grade level, which includes the theaters, stage, box office and restaurant. Furthermore, an additional public, upper foyer-level walkway allows for circulation, performances, and vantage point from which audiences can watch performances in the lower main foyer. Staff circulation is at the ground floor as well for production needs, but also along the upper basement levels.