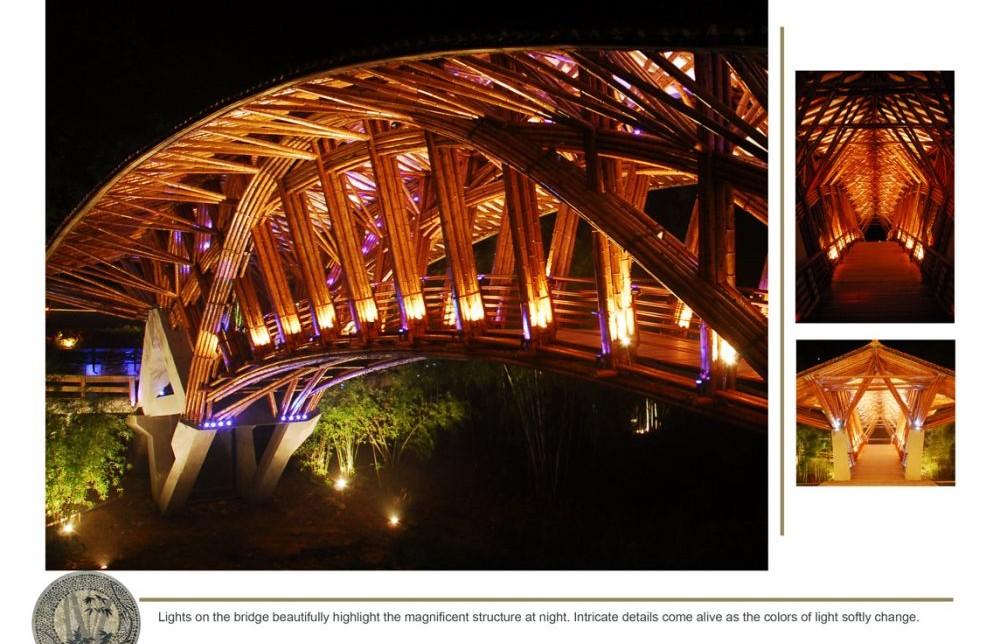 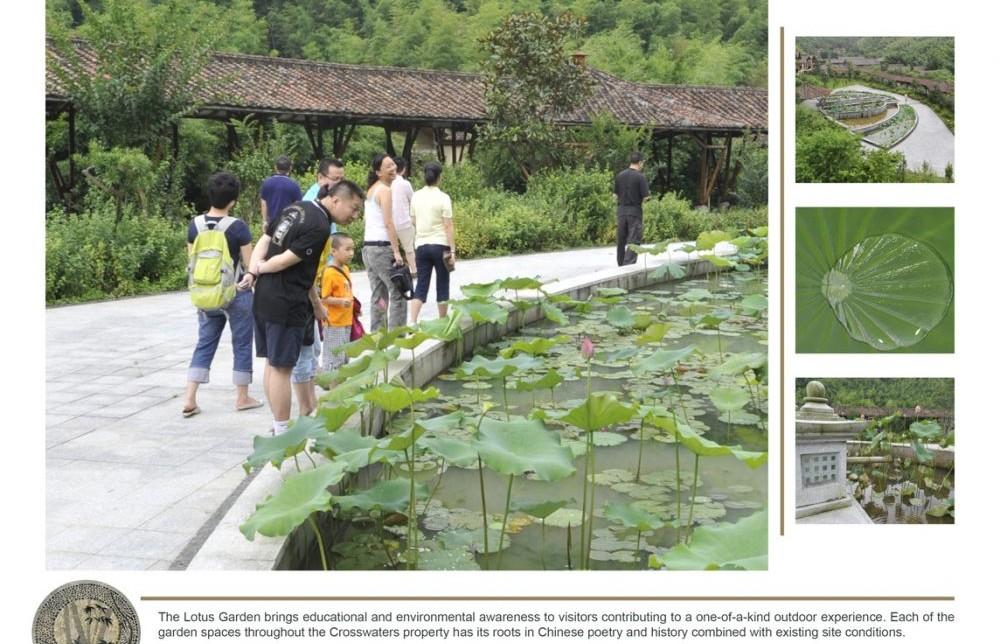 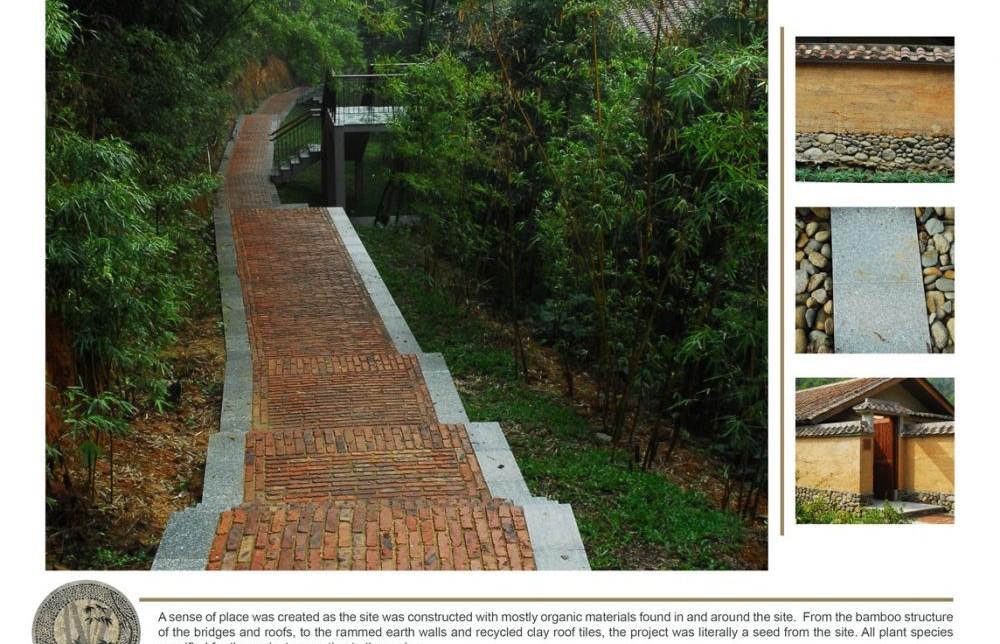 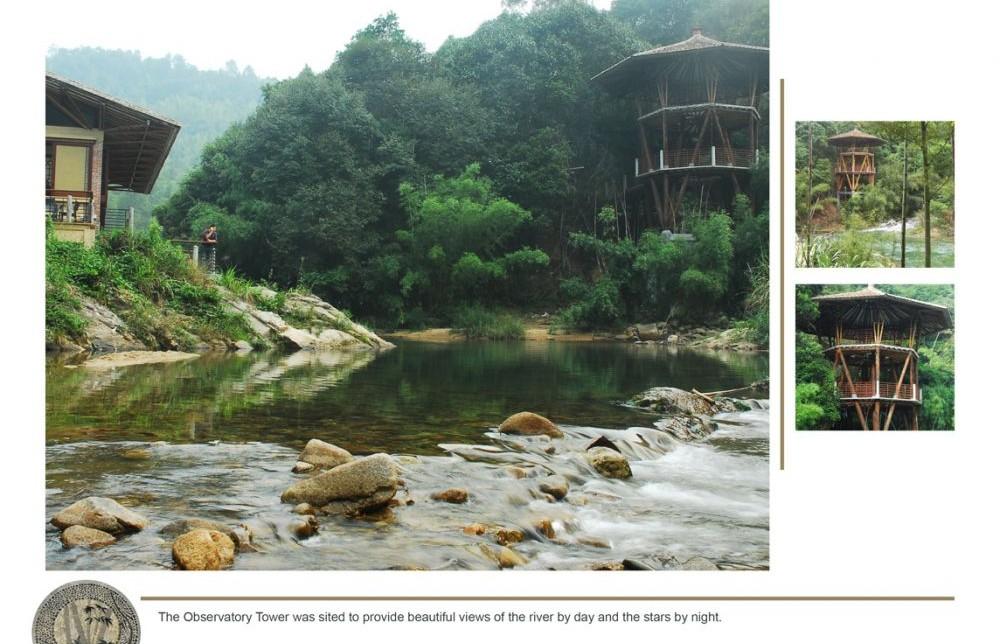 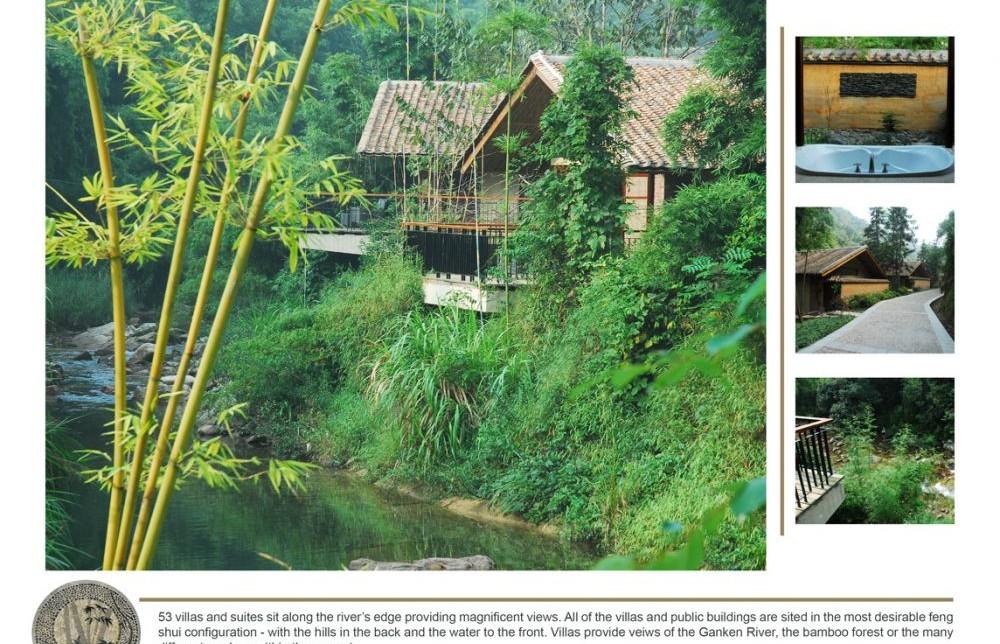 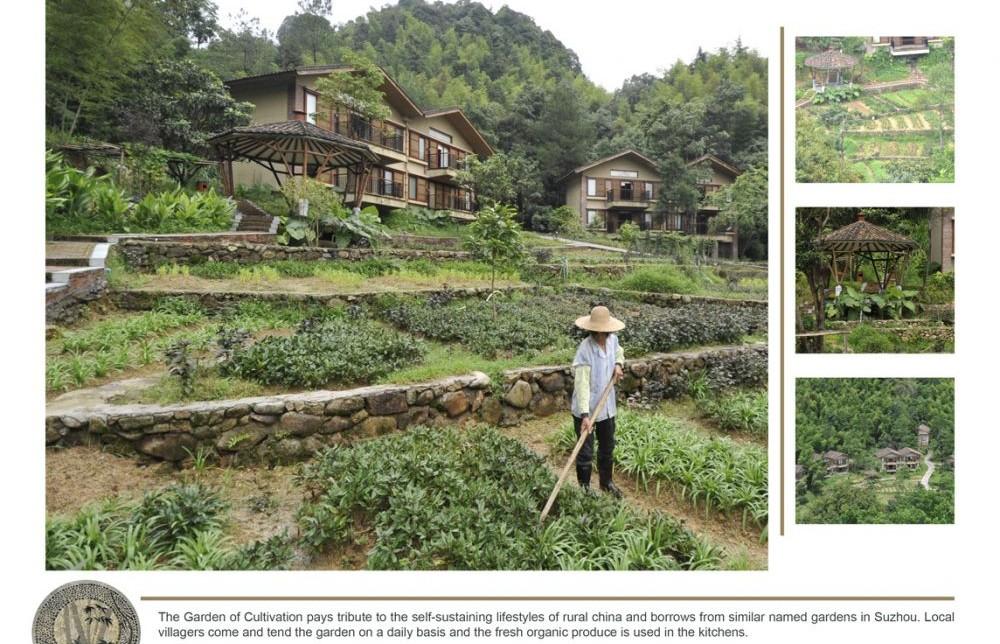 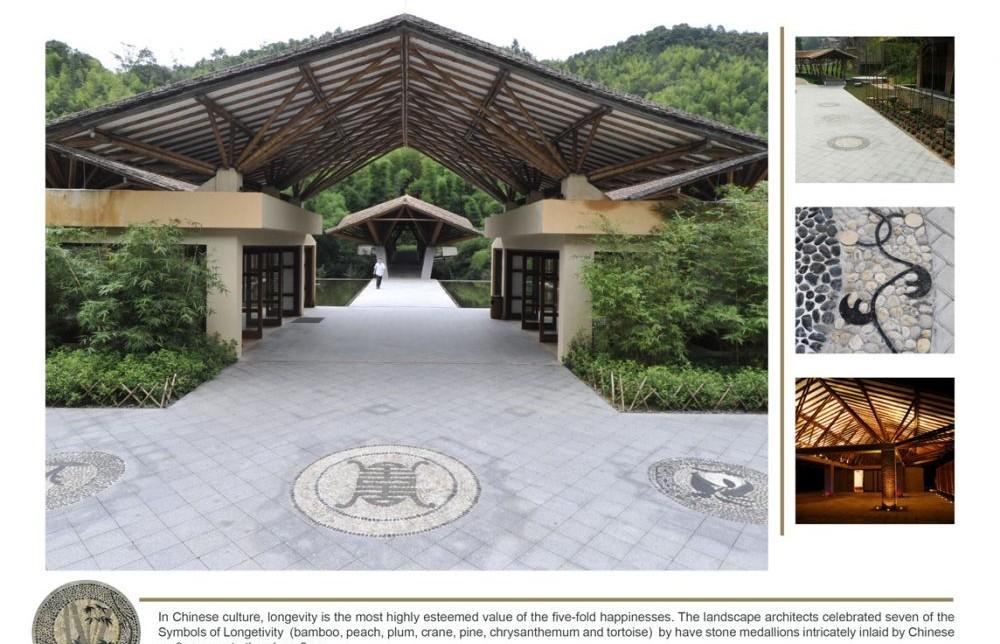 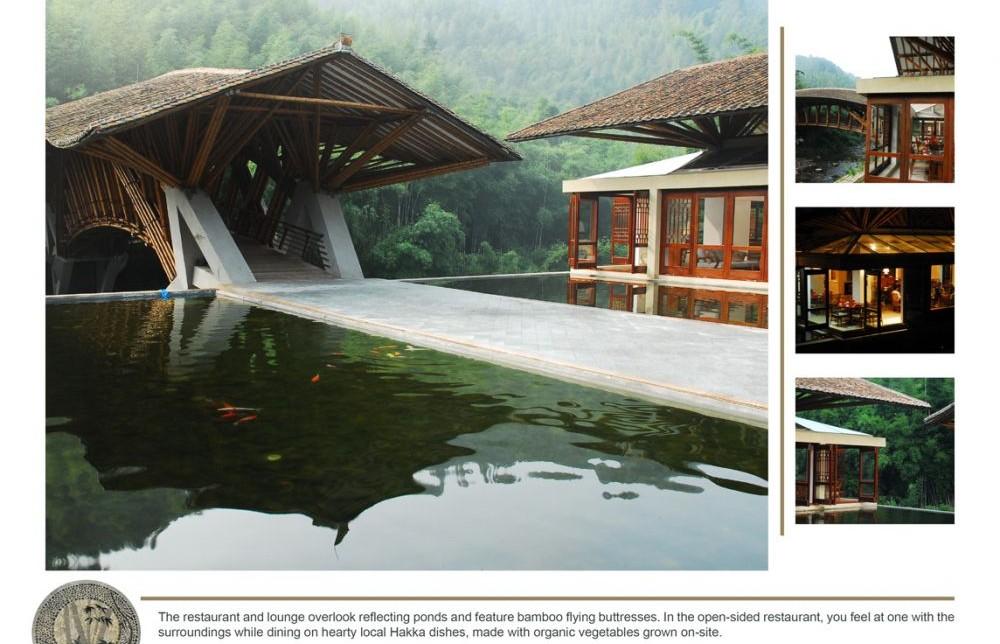 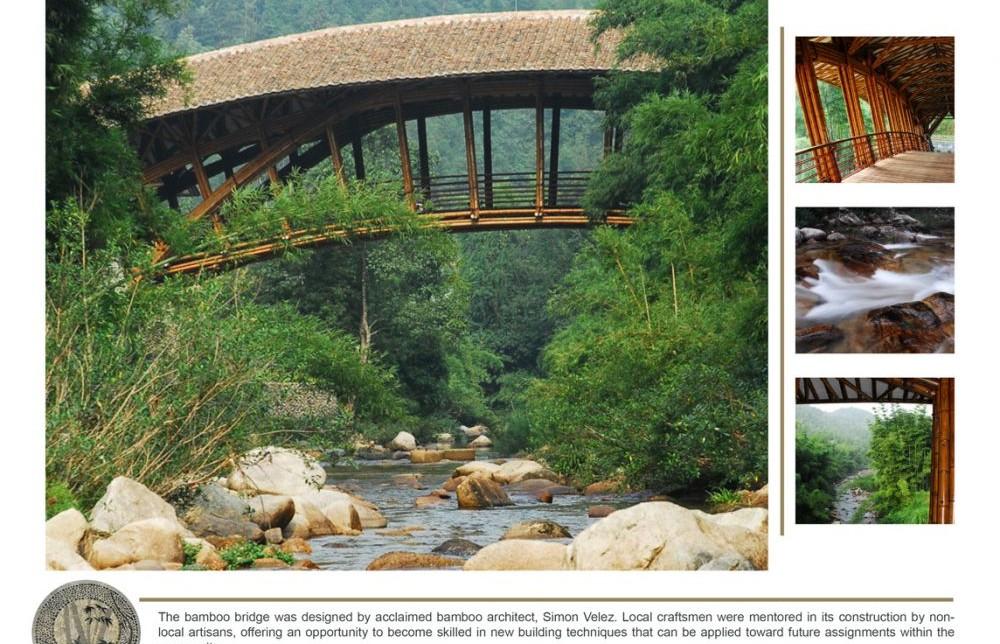 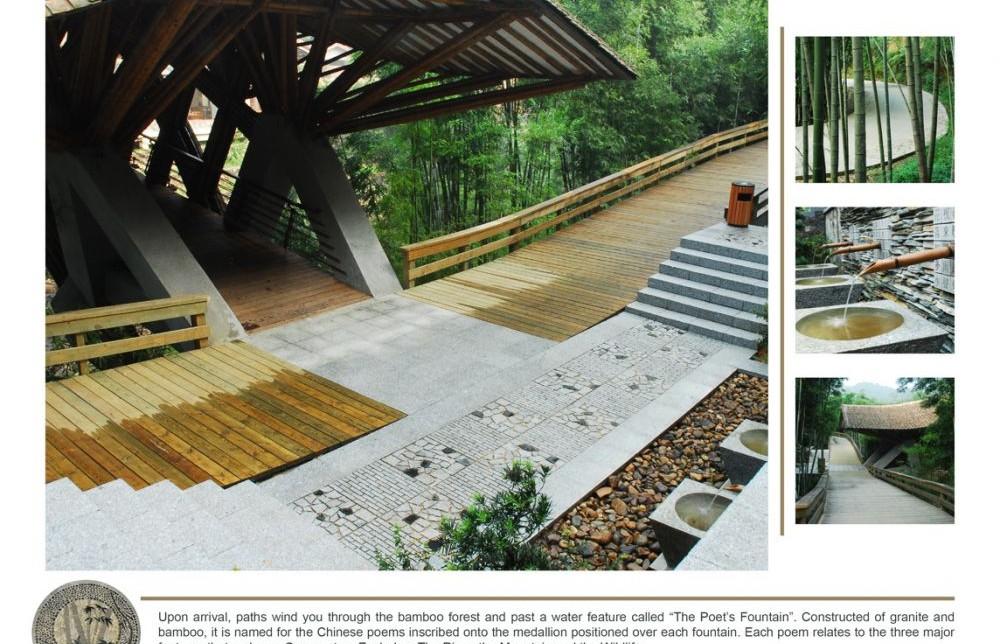 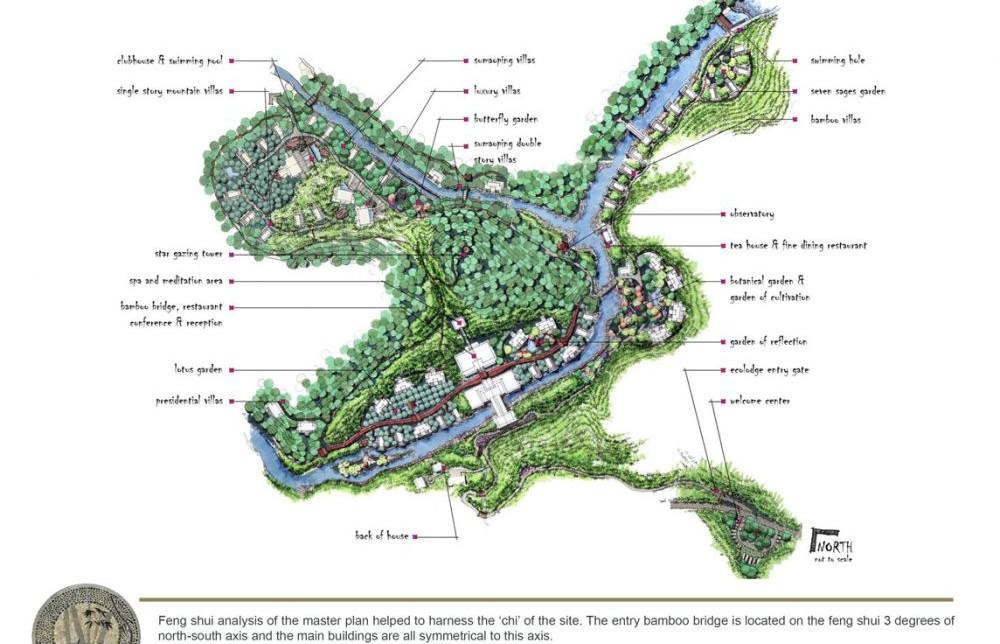 Longmen Mt. Nankun Zhongheng Ecotourism Development Co. Ltd., a company owned by Chinese Nationals, wanted to implement an innovative approach, holistic in nature, addressing many of the environmental and social problems that had continued to plague their country over the years. The clients goal was to develop the first ecotourism destination in China and they selected, as a setting, the forests of Nankun Shan Mountain Reserve, Guangdong Province, South China.
Site and Context

The Nankun Shan Mountain Nature Reserve lies within the Nankun Shan Forest Park located in Central Guangdong, 80 miles from Guangzhou. The park, which covers an area of 260 square kilometers and is home to over 1,300 plants and over 30 square kilometers of bamboo, the main species being Phyllostachys pubescens. The Nature Reserve was established in 1984 with its major objective to protect the subtropical evergreen broadleaf forest. Over 5,000 people live in the Reserve and their main income generating activity is the harvesting of bamboo for use in scaffolding in Guangzhou and Hong Kong.

Crosswaters Ecolodge was the first project implemented as part of a 10-year overall ecotourism plan for the Nankun Mountain Reserve. The 10-year plan is to develop the reserve as an ecotourism destination providing a variety of experiences and accommodation facilitiesfrom three-star to five-star resorts. Mountain climbing, hiking, boating, birding, tubing, cycling, walking, swimming, astronomy, wine tasting, fruit picking, wellness activities, and fish farming are among some of the experiences available to tourists. The plan also includes the development of a boutique 25-room lodge called Sumoaping River Lodge, a three-star village lodge, visitor and interpretation center in Shangping Village; a bamboo museum, retail and civic center in the village; and enhancement and building of new trails.
Analysis

The development team employed a cutting-edge, quadruple bottom line approach which desires to:

not only protect the existing forest biodiversity, but enhance it
not only involve the local people but also help them benefit from the development
not only inject much needed capital into the local economy but also make a profit
not only respect the spirit of the place but enrich it through thoughtful, sensitive, sustainable planning and design

For the development of Crosswaters Ecolodge, the landscape architects performed an in-depth social, environmental, and metaphysical analysis. Three different on-site visits one week each were conducted during the winter, spring and summer. Quality time was spent on the site to understand and then study the ways of living of the local Keija people, who make up the majority of the population on the mountain. Particular attention was paid to their internal spaces and relationships to gardens and philosophical connections with the bamboo. The design team looked for clues and responses from what they observed in relationship to drainage, existing agriculture, water levels, seasonal visitor traffic and industry.

From the physical topography base map provided by the client, GIS was used to generate several layers: watershed, vegetation, hydrology and land use. GIS add-ons Spatial Analyst and 3-D Analyst were also utilized to create slope, elevation, slope aspect analysis and 3-D terrain analysis layers from which the optimum locations for the various buildings were identified.

For the metaphysical site analysis a local renowned Feng Shui Master with 20 years experience was brought in to help analyze the chi Chinese word for energy of the site. South China is the center of Feng Shui beliefs and thought processes and it was felt that the local cultural and spiritual values needed to be respected. It was crucial that the chi of the site not be disturbed during development.

We requested the client organize a kick-off meeting with the local community whereby we interacted with the local Keija community and heard their views on ecotourism development in their surrounding areas. Several discussions were held during which local wisdom and knowledge was tapped to ensure that valuable information about the site was used to develop a truly authentic ecolodge. The opportunity was also taken to inquire about local bamboo artisans and craftsmen/craftswomen. Several awareness-building presentations on ecotourism and ecolodges were also presented to local authorities.
Planning and Design

The local people were brought into the planning process from day one. Members of the local council and leading citizens from the main village made valuable contributions. There was significant community participation and the landscape architects received regular feedback on the various alternatives that were presented to the client and local people. One of the greatest challenges, the language barrier with the clients and local craftsmen, also served as a great benefit. It forced the design team to explore a more artistic way of constructing the design elements. While some traditional construction drawings were used, many of the design elements were completed by local craftsmen using hand sketches and rough scale models with materials found on site.

The Crosswaters Ecolodge is a celebration of bamboo, reflecting its context with the surrounding bamboo forests. Bamboo is known as the “friend of the people” in China because of its diverse use in everything from food and cooking to furniture, paper, musical instruments, boats and home. The spirit of the bamboo is celebrated in the landscape architecture, architecture and interior design of Crosswaters Ecolodge. All of the linens are even made of bamboo. The Ecolodge is the largest project in the world with regard to the use of bamboo in a commercial development. It is also the first instance this method of construction bamboo as a structural member in a place of habitation was introduced in Asia in a large project.

Crosswaters also celebrates the rich garden history of China. The landscape architects researched and analyzed ancient Chinese gardens such as Tao, Shouzhou and Imperial Gardens Summer Palace, Forbidden City to understand the relationships between insideoutside and cosmic orientations of buildings and gardens. An understanding of Chinese garden design elements led to research into the poetics of traditional garden design. This research was then used in the planning and design of the various gardens. The botanical garden showcases bamboo species from China and acts as an interpretive experience for guests. Other gardens include a Lotus Garden, Reflective Moon Garden, Seven-Sages Tao Garden, Bamboo Sculpture Garden, Butterfly Garden and an Organic Rice and Vegetable Garden.

All plant species specified for the project were native to the region. There are no exotic species. The contractor was also issued sustainable construction guidelines. There was extensive use of abundant local materials such as bamboo, earth, clay tiles, marble and river stones. A lot of the building materials are recycled and reused, such as the boardwalks being made of railway ties. Local craftsmen were brought in to help with all the rammed-earth wall and bamboo construction.
Collaboration

The landscape architects helped the client build a truly international consultant team including the top two bamboo designers in the world. The core consultant team represents all the six continents of the world. The rest of the expertise was local, both from academic and professional fields. The architect of record is based out of Guangzhou and some of the most well-renowned professors in South China provided input in ecology, ornithology, plant selection, horticulture and tourism history.

Taking into account language, culture, spirituality, and the diverse regions of the world, Crosswaters Ecolodge is an excellent example of sharing and learning from the vast knowledge offered by the land, water, astronomy, the universe and the people.