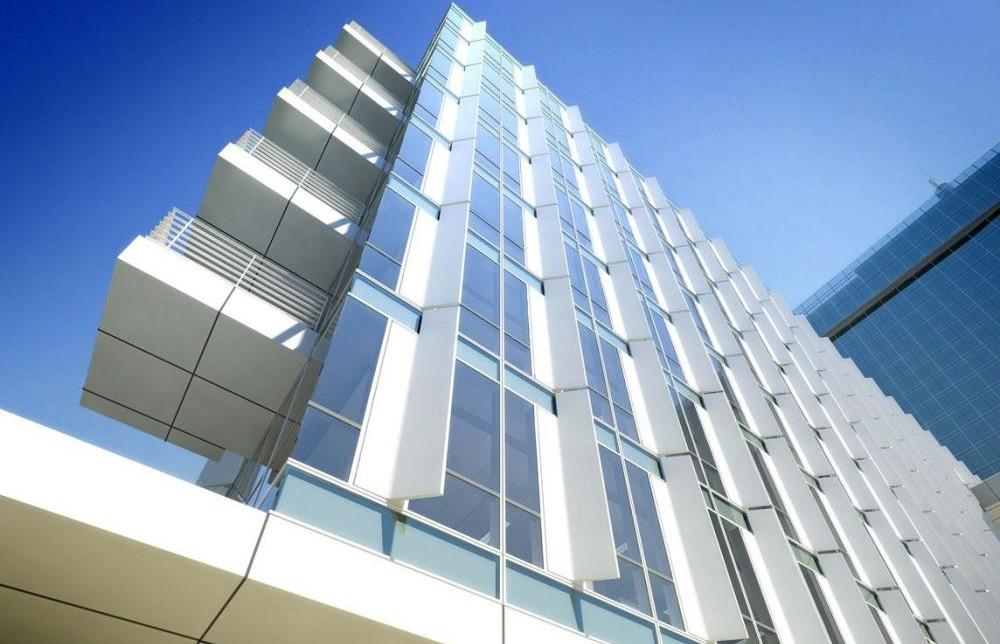 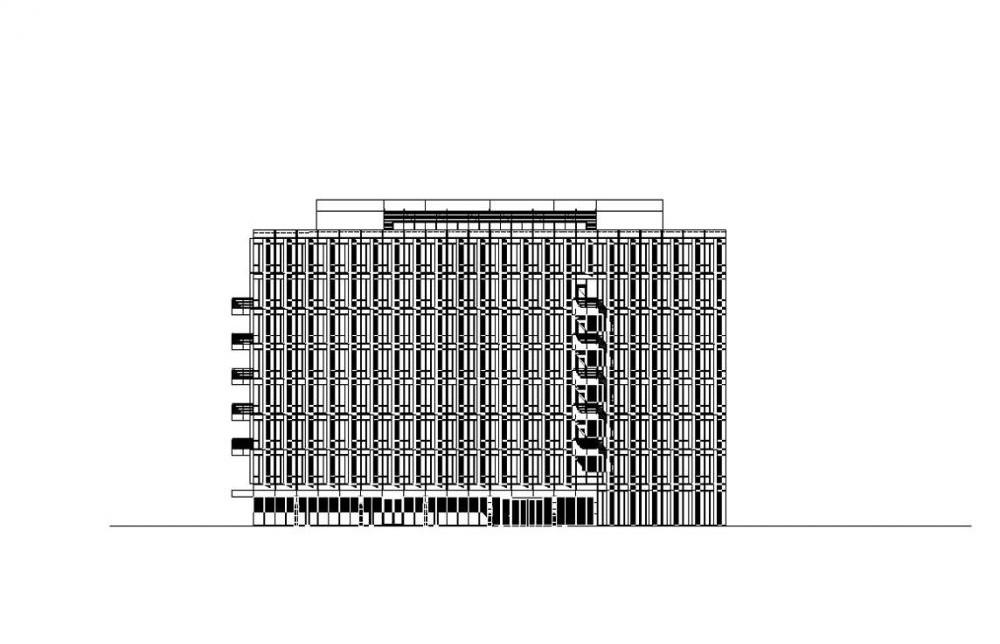 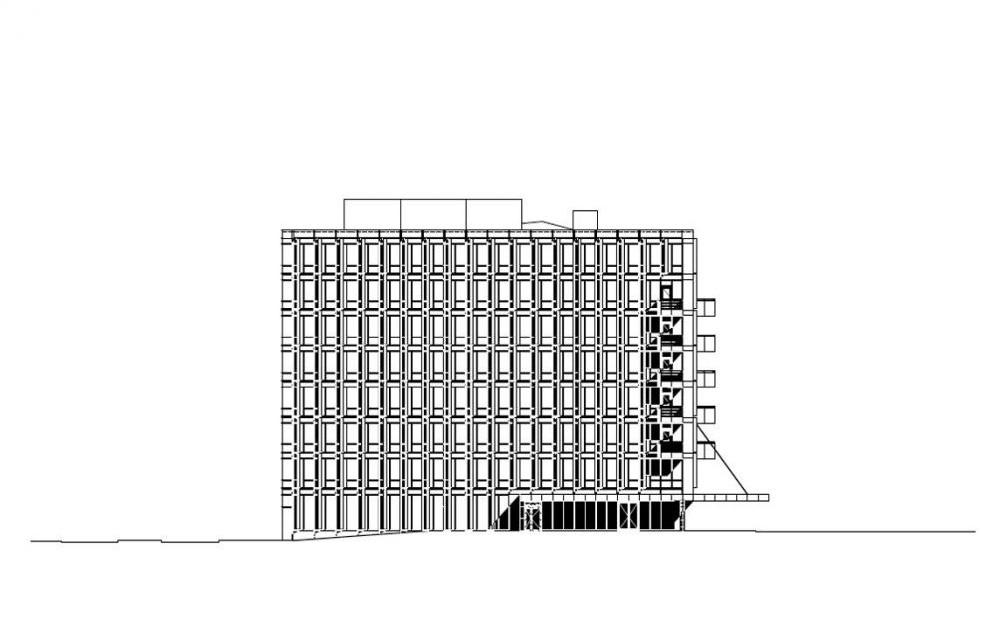 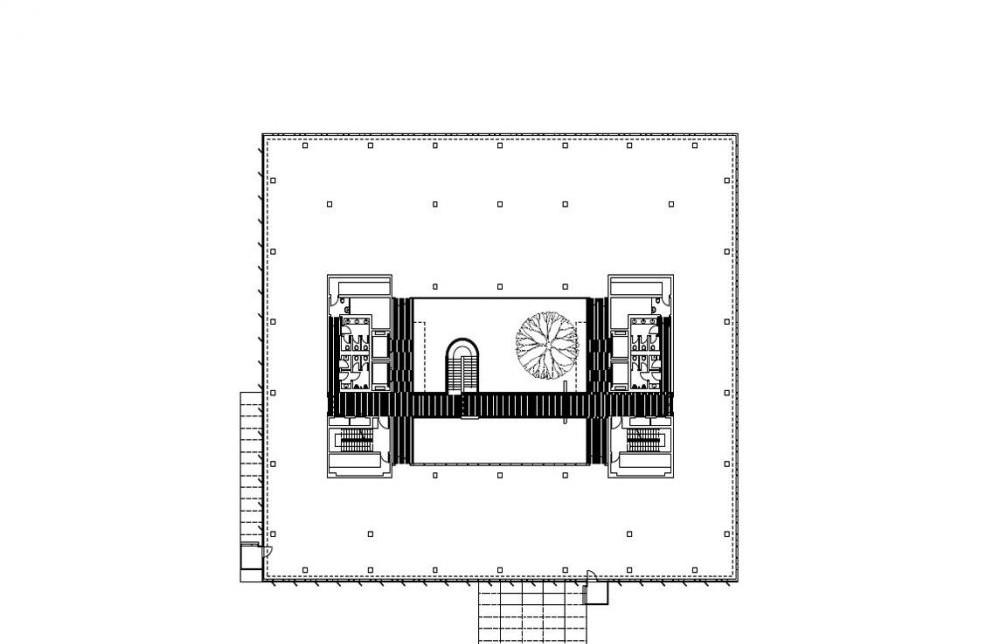 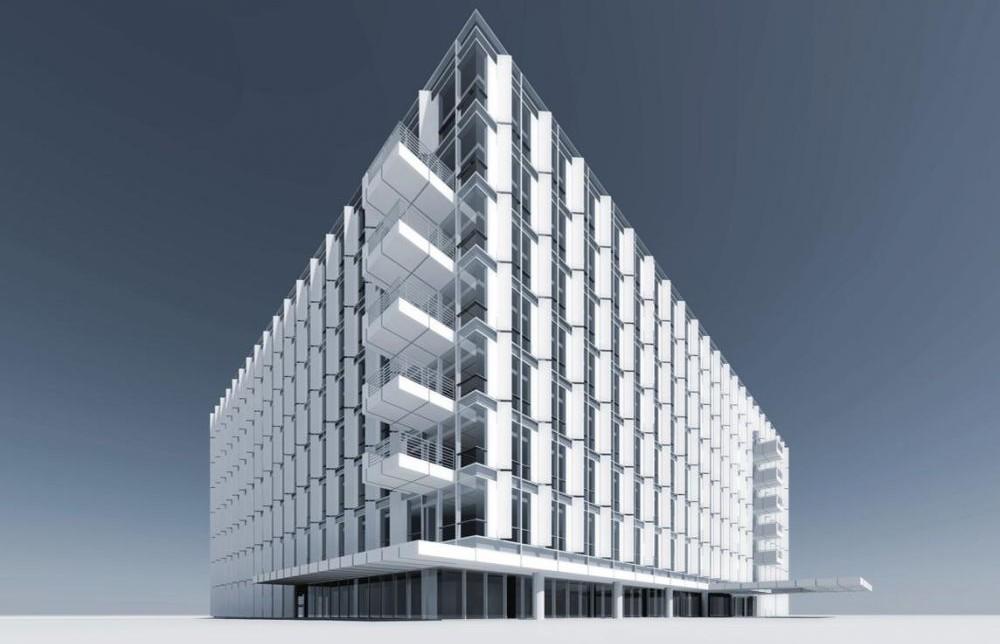 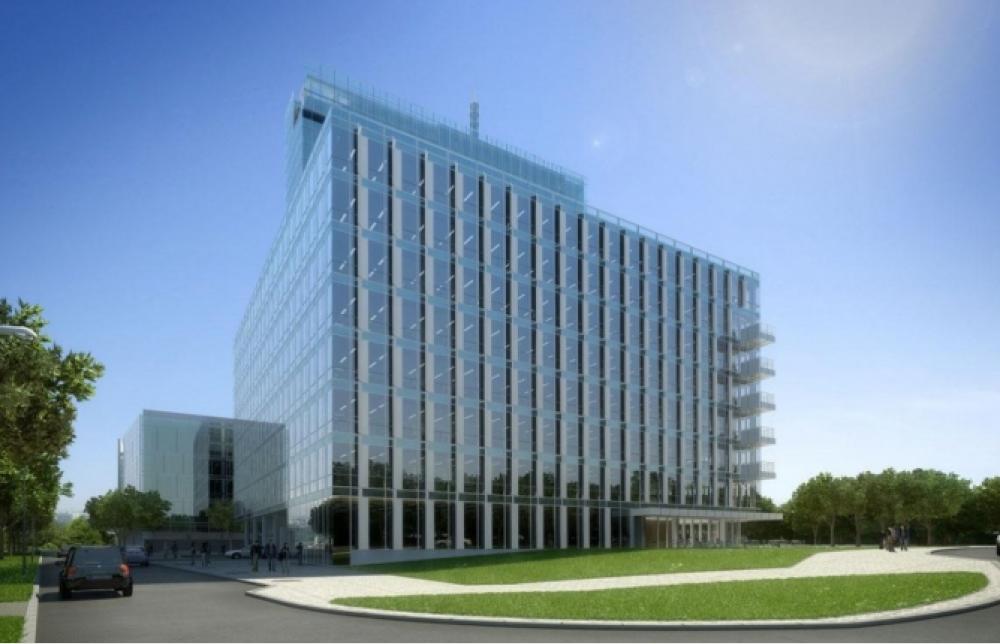 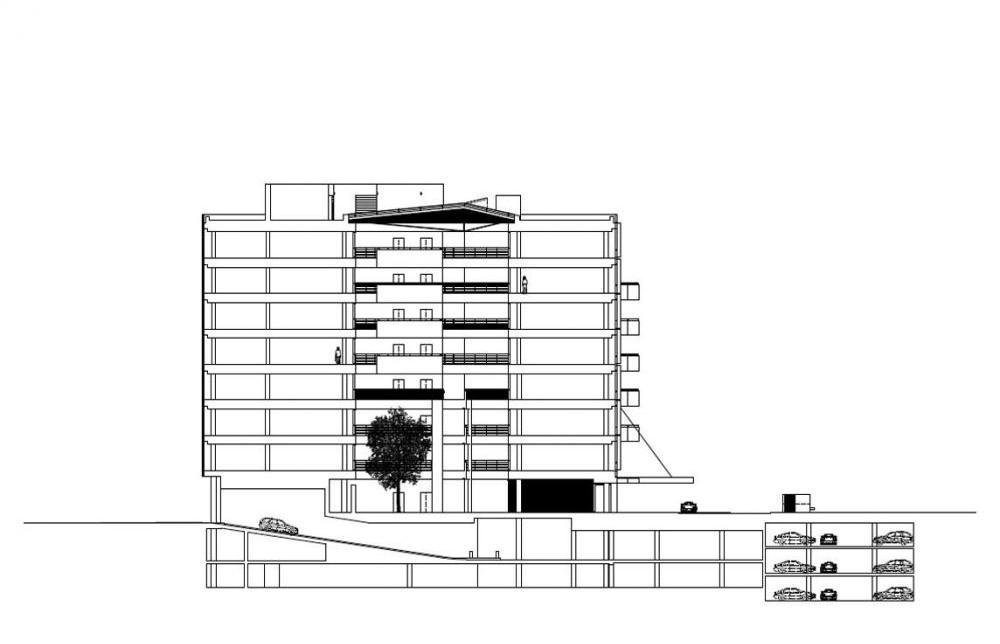 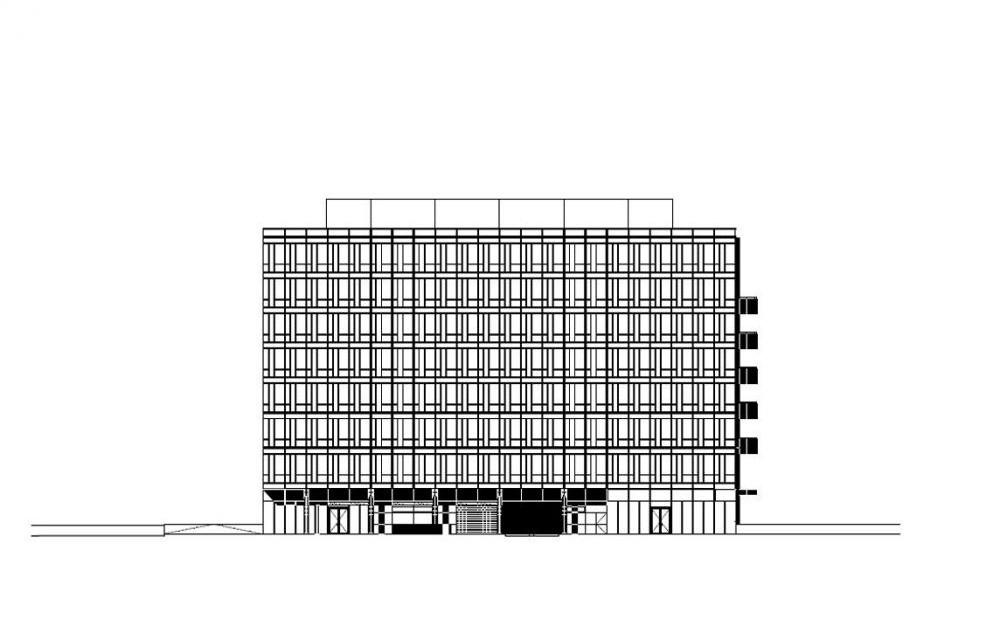 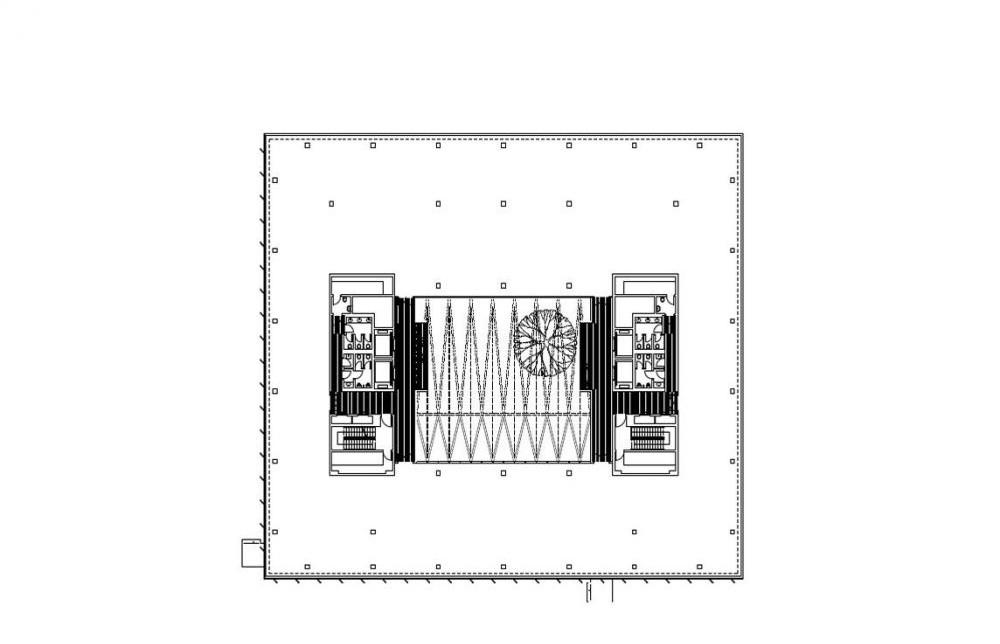 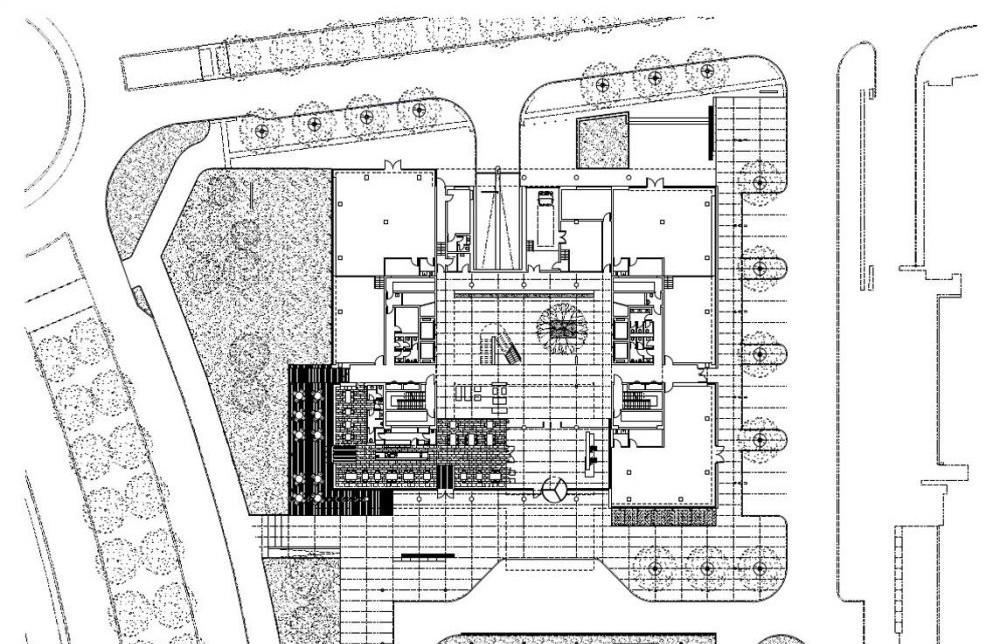 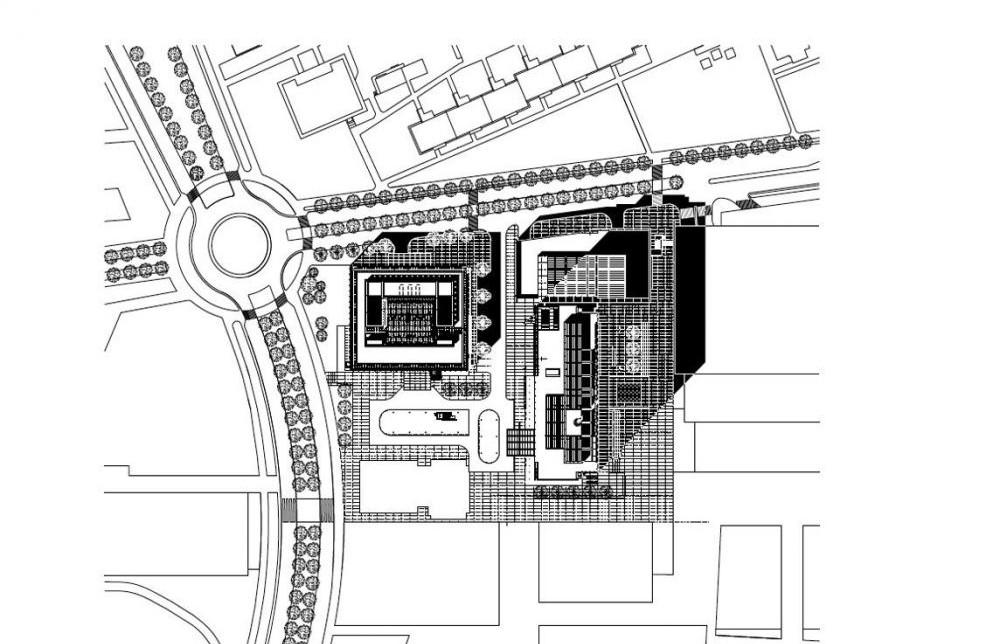 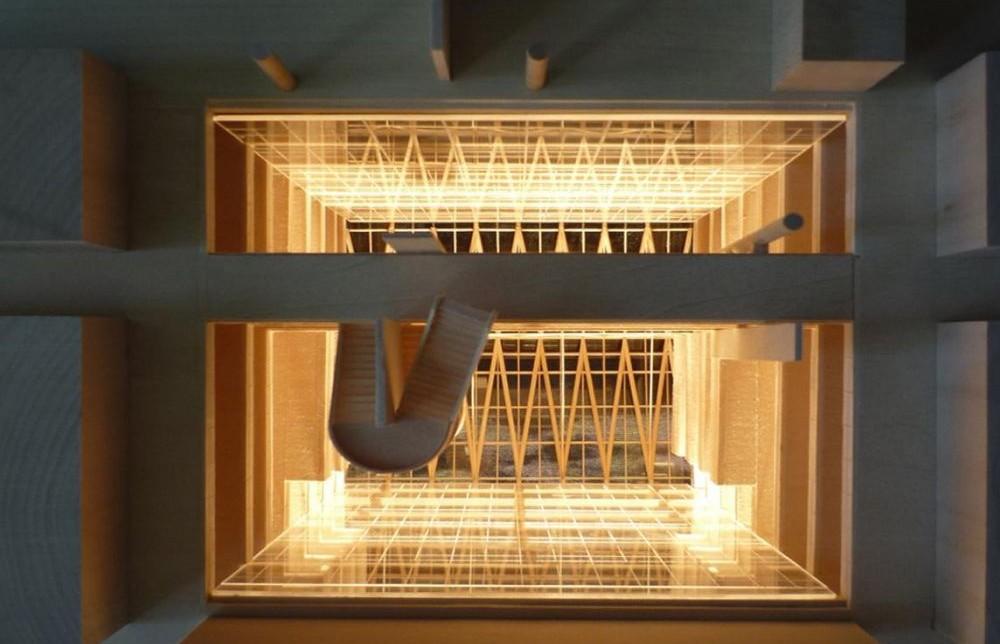 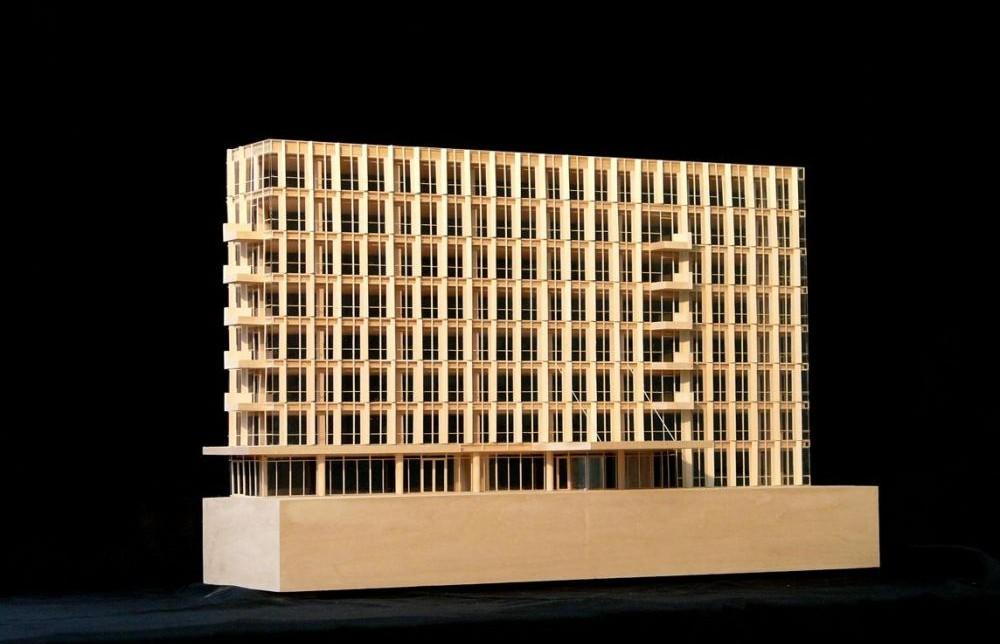 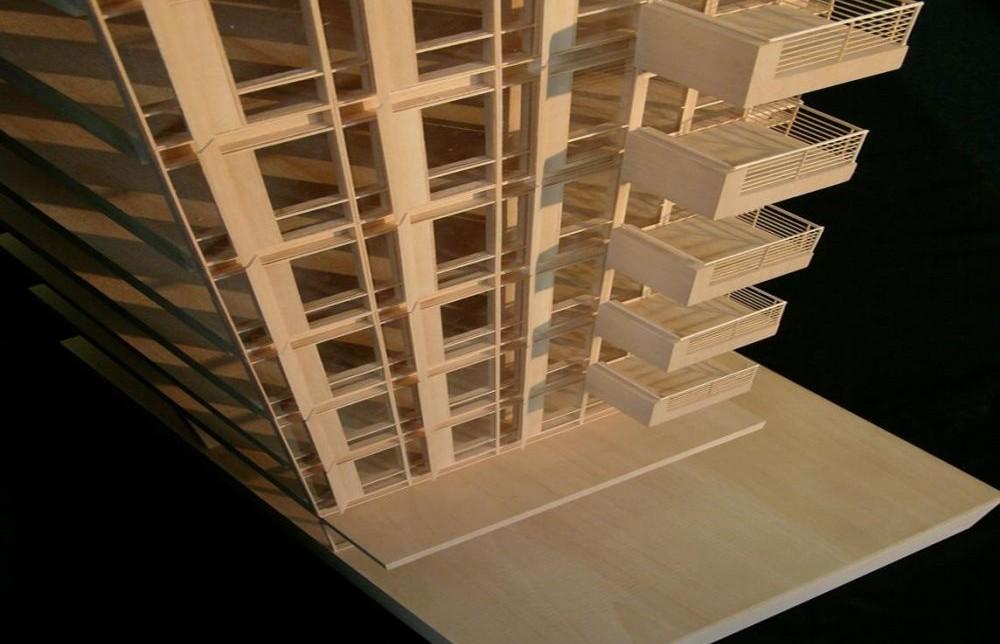 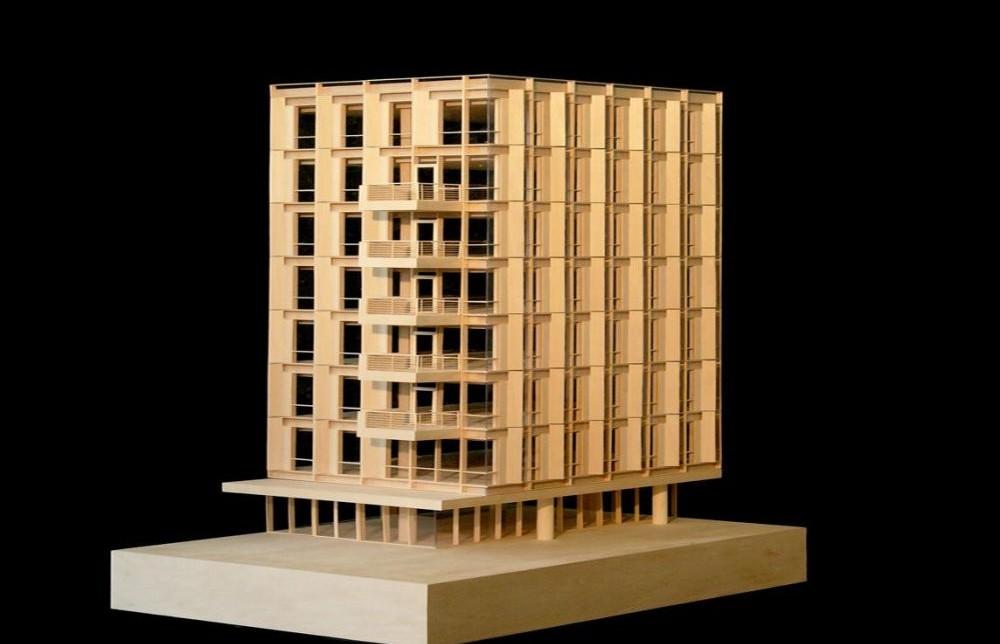 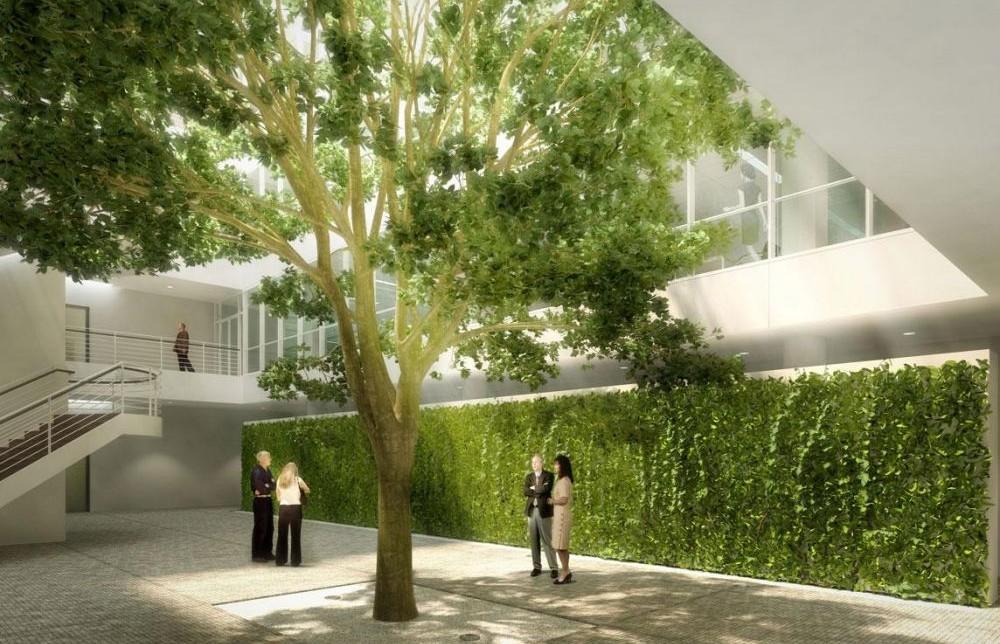 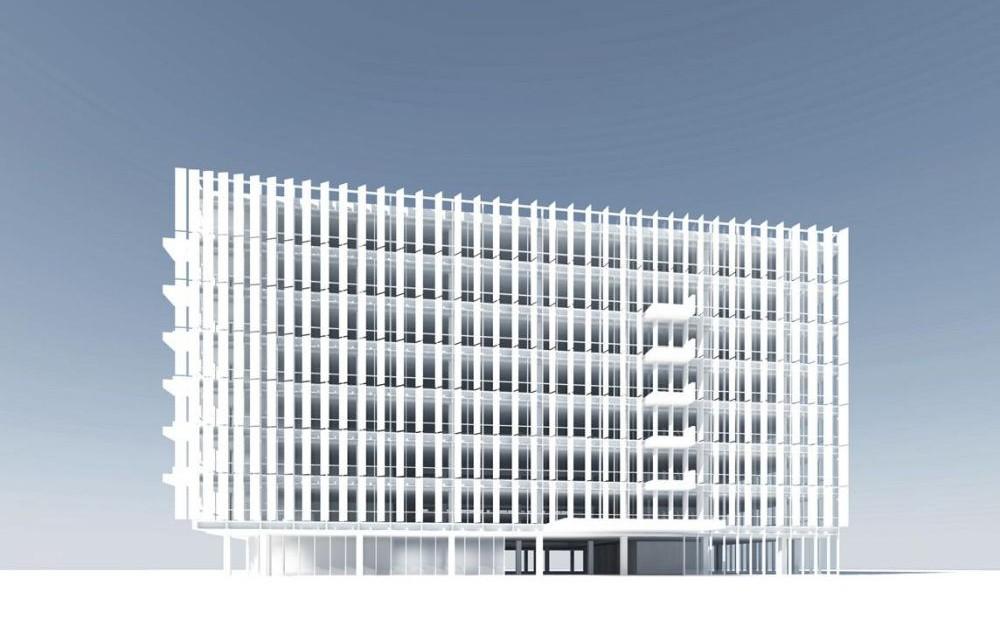 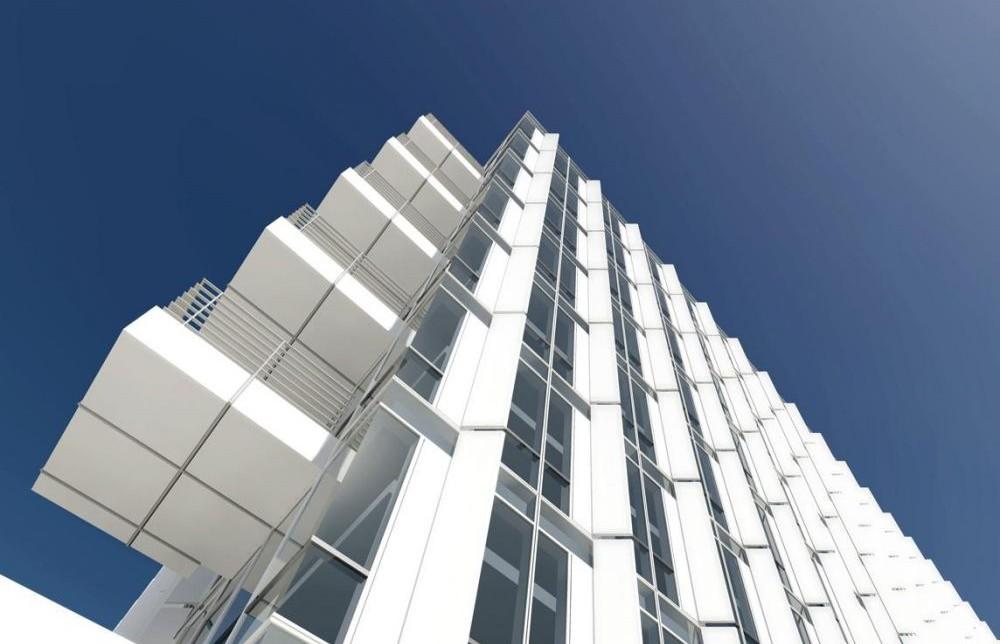 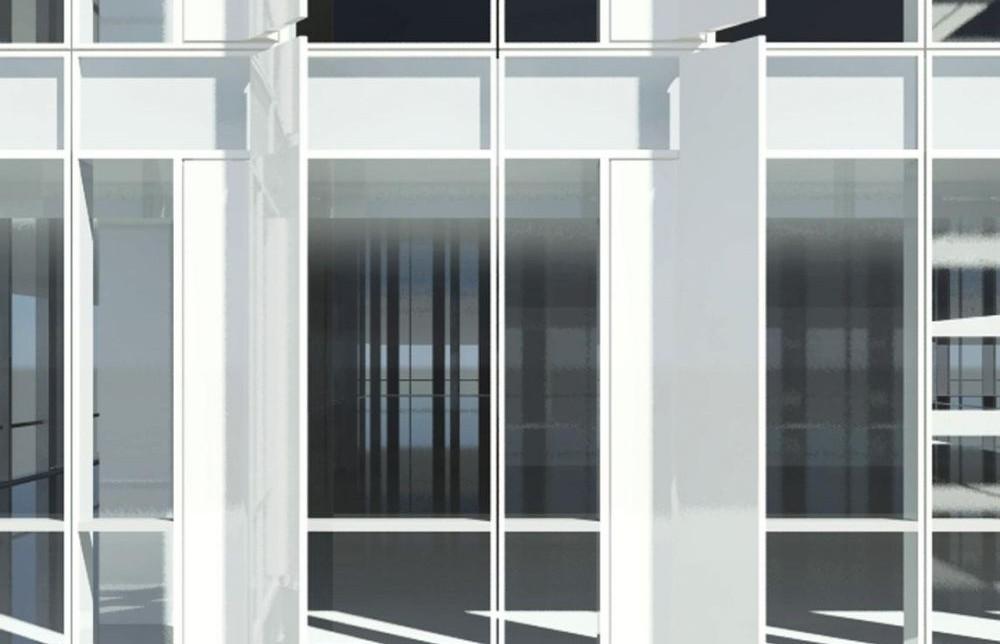 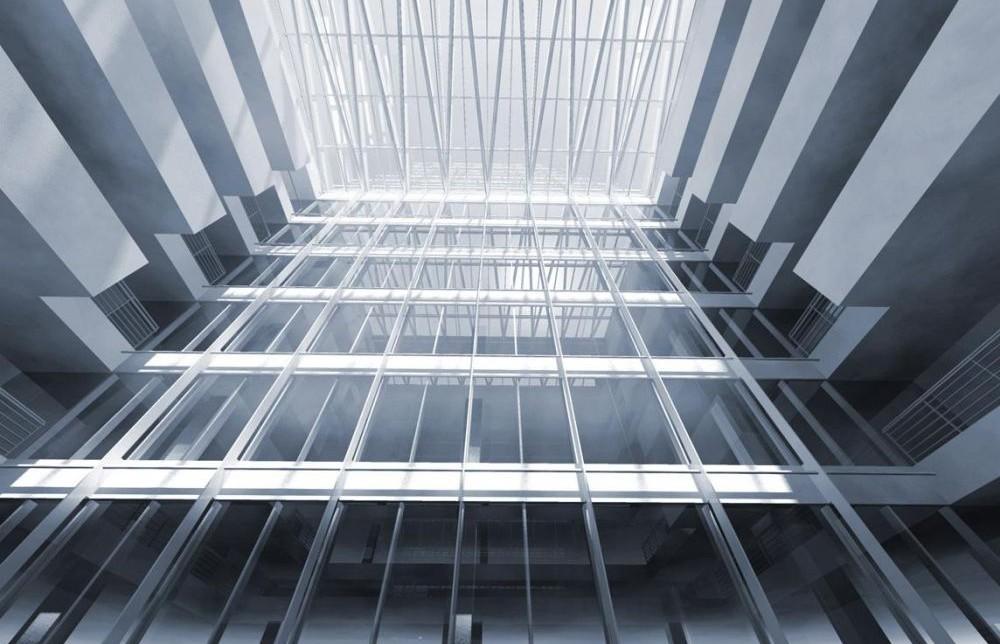 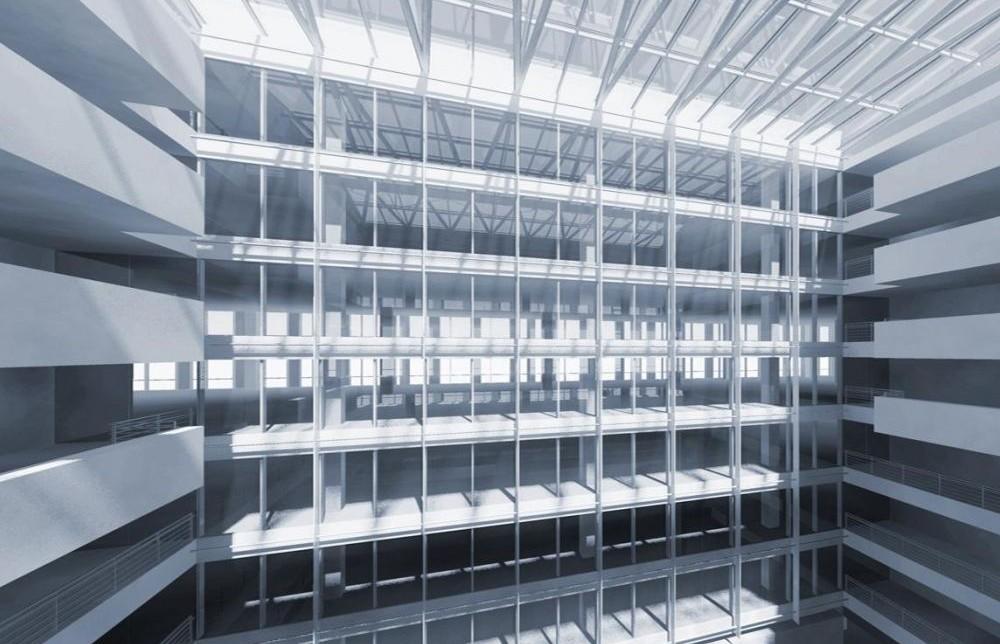 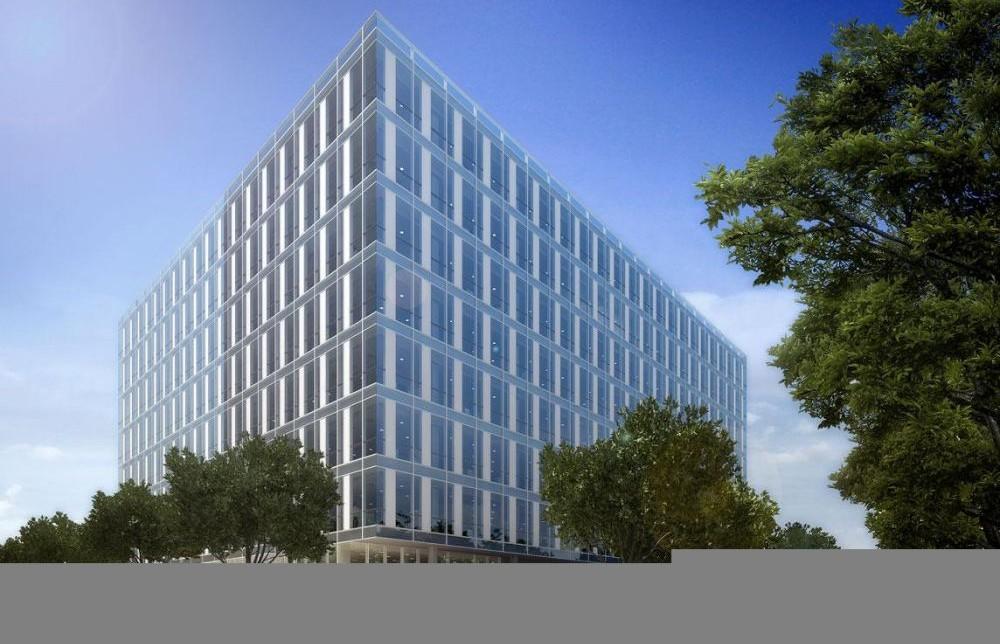 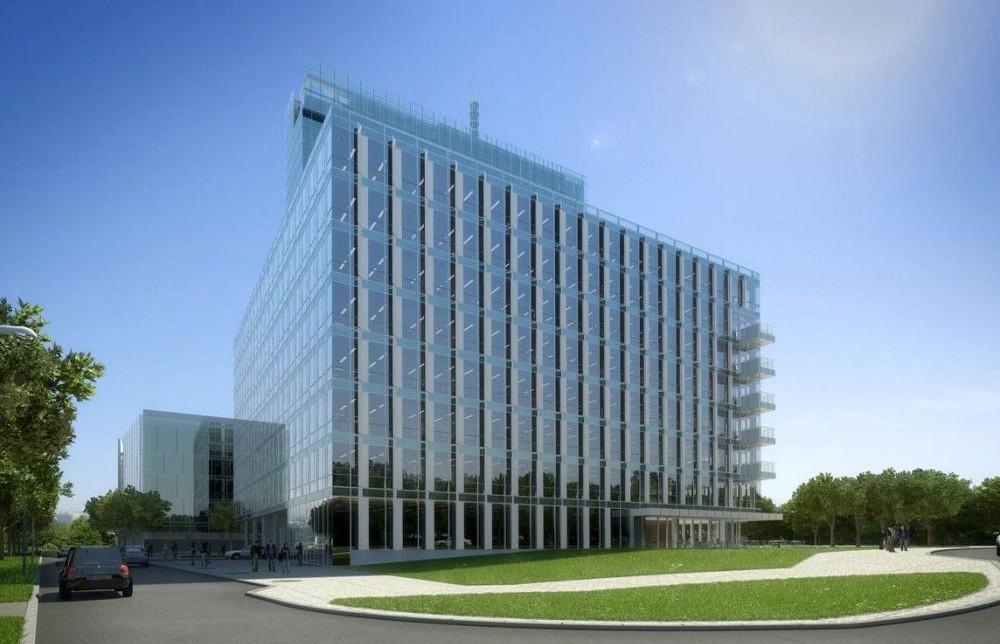 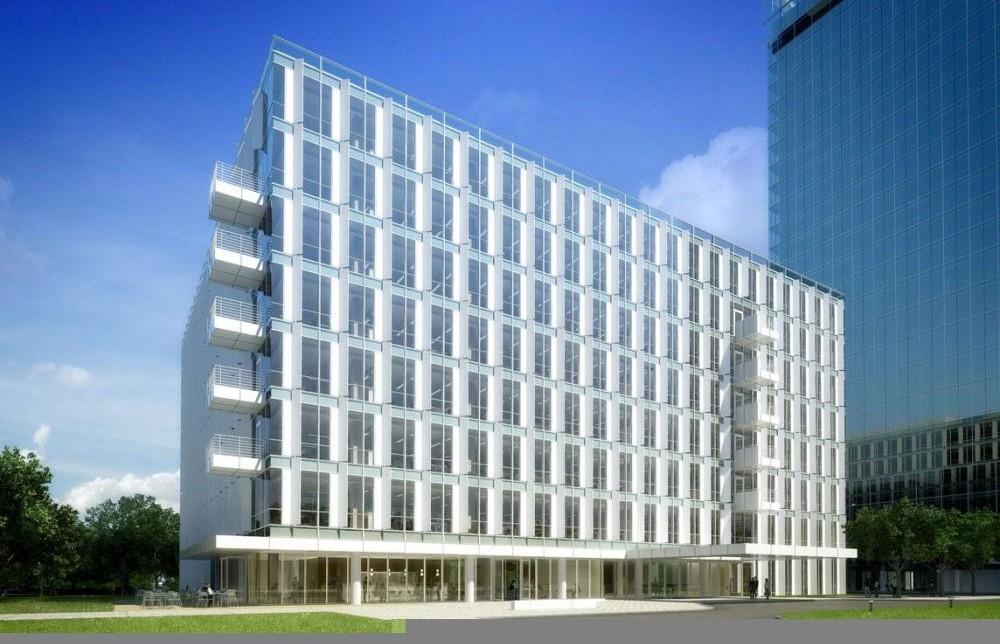 This is RM&P’s third building within the Master Plan of Prague 4- Pankrác that began almost a decade ago with a local Czech developer and named the CITY Project. Based on RM&P’s Master Plan of the superblock on the Pankrác Plains, this once neglected area of Prague has now been transformed into a multi-functional, vibrant and revitalized business, commercial, and residential district filled with green public spaces and amenities. City Green Court has been modified and re-designed to the new owner Skanska’s sustainability goals and high standards to achieve the highest level of LEED certification. The project has recently received a LEED Platinum Pre-certification.

With City Green Court, Richard Meier & Partners completes the northwestern corner of the superblock along M. Pujmanové and Hvĕzdova Streets with a cluster of three buildings. Conceived as a geometric volume in dialogue with the near context, City Green Court also offers respected contrast to the surrounding buildings. Like its earlier siblings City Tower and City Point, it is inspired by the language of Czech Cubism with an expressive façade that responds to issues of conservation and sustainability articulated with forms reminiscent of this avant-garde movement. When completed in early 2012, it will be a welcomed and key addition to the Pankrác superblock.

“We are working together to make City Green Court a benchmark for green building design in the Czech Republic, said Richard Meier. “This assignment has been particularly challenging as it also meant addressing the historic beauty of Prague and at the same time creating a modern image of the City for its future.”

Distinctive vertical solid panels with fins angled according to the sun’s orientation are integrated into the design of the curtain wall, emerging from both the south and west facades to minimize solar heat gain and to provide balanced shading and comfort within the interiors while maximizing daylight and views. In contrast, the north and east facades do not need solar protection: shading is unnecessary to the north, and City Tower, the adjacent high rise standing on the neighboring site shields the building to the east. White spandrel glass replaces the fin panels producing facades which are calm, sleek and uniform. The four facades when juxtaposed create a harmonious and dynamic envelope that can be perceived differently from close and distant vantage points. The eight-story building is organized around a central sky-lit atrium surrounded by highly efficient office floor spaces. To the south, a grand canopy marks the formal entrance to the building that leads into a single height lobby which then opens into the multi-story atrium. Atop the seven office floor plates, the partial mechanical penthouse level is covered with an extensive green roof and a skylight. Nestled in the atrium is a singular black olive tree and green ivy wall, with bridges spanning above from one side of the space to the other while a free standing stair connects the first four floors promoting movement and interaction, and encouraging less use of elevators. The exterior and interior of City Green Court are intertwined visually and physically with landscape elements spilling into and reappearing in the atrium.

“Skanska Property Czech Republic, our Associate Architect CUBOID and our local consultants in Prague are fast becoming experts in green building design,” said Partner in Charge Dukho Yeon. “With its tautly composed form and elements, City Green Court embodies a certain discipline and restraint; designed within the framework of Skanska’s green initiative. We hope that we continue to educate each other and influence future development with a critical outlook on architecture and social responsibility.”

City Green Court is expected to achieve LEED platinum certification in the Czech Republic by drastically reducing energy consumption. In addition to the very efficient building envelop, some of the most important measures towards LEED certification include natural ventilation of the atrium during the summer, state-of-the-art mechanical systems, reduction of water runoffs and storm water collection, green roof, indoor air quality control and the use of local and recycled materials.

“We are proud to cooperate with Richard Meier & Partners Architects on the redesign of City Green Court to meet the growing interest in green, modern and flexible office space that offers a stimulating work environment,” said Britta Cesar, Managing Director of Skanska Property Czech Republic, and continued: ”Together with the enthusiasm and commitment from Richard Meier & Partners Architects we managed to achieve LEED platinum Pre-certification.”

“Above all we hoped this Master Plan for the Pankrác Plains would be a catalyst for growth, said Richard Meier. “After 10 years of hard work and dedication we are now seeing the result – which is an incredibly robust neighborhood, a new urban fabric rich with activity, and an optimistic view of urbanism for Prague.”