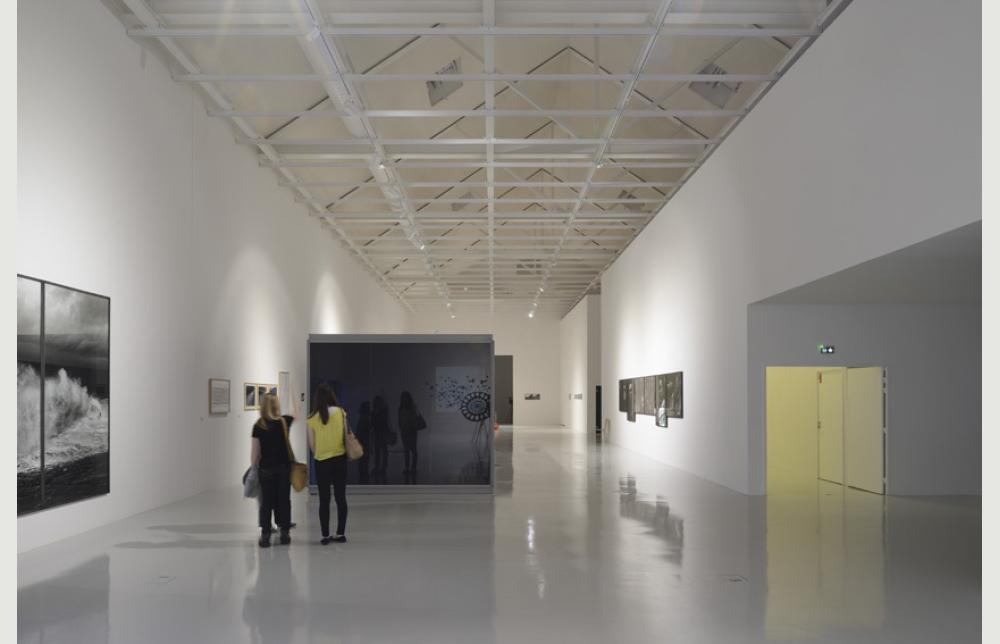 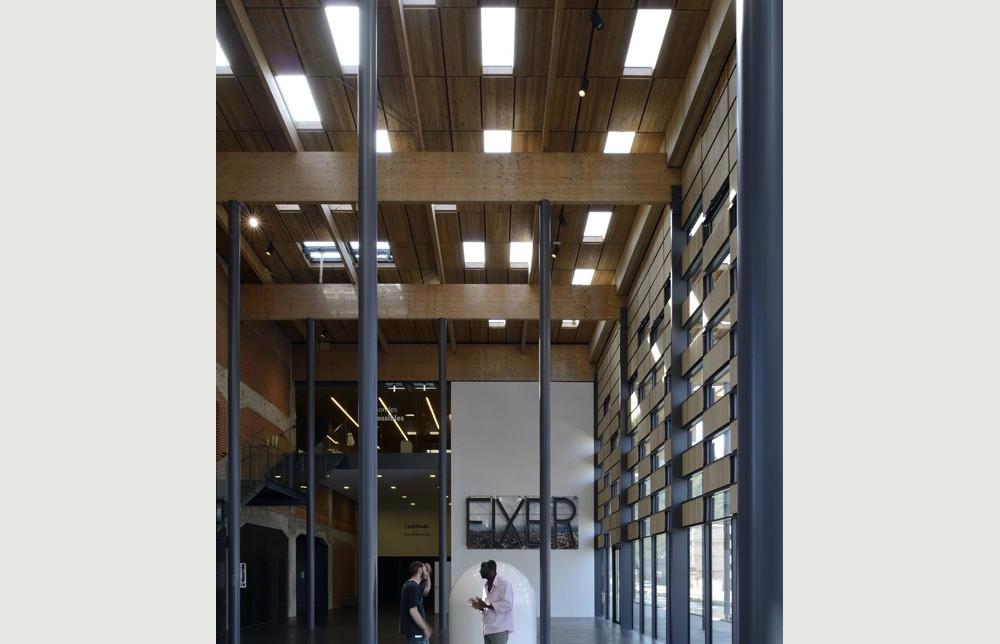 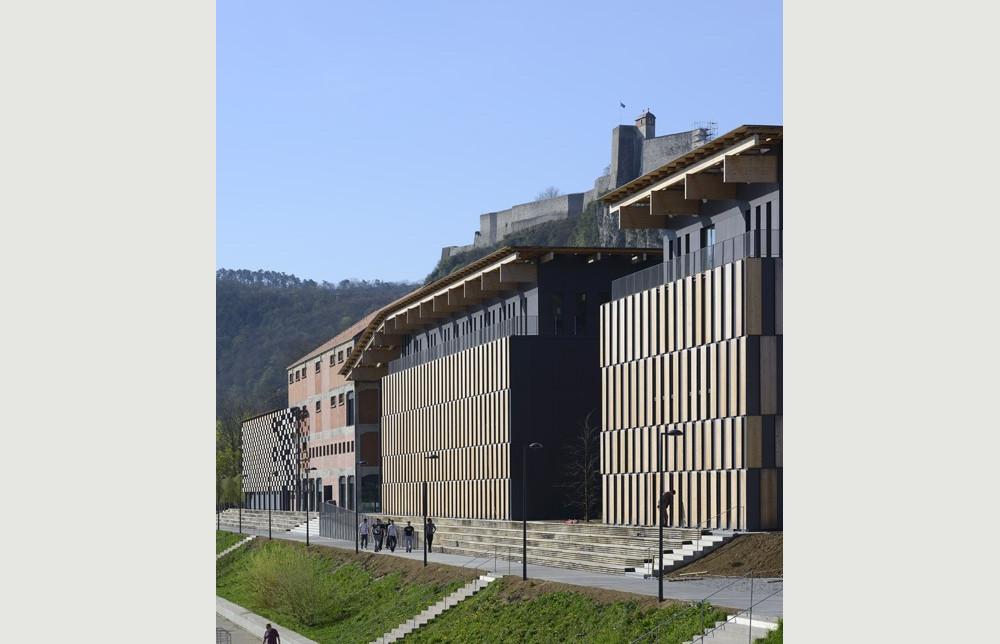 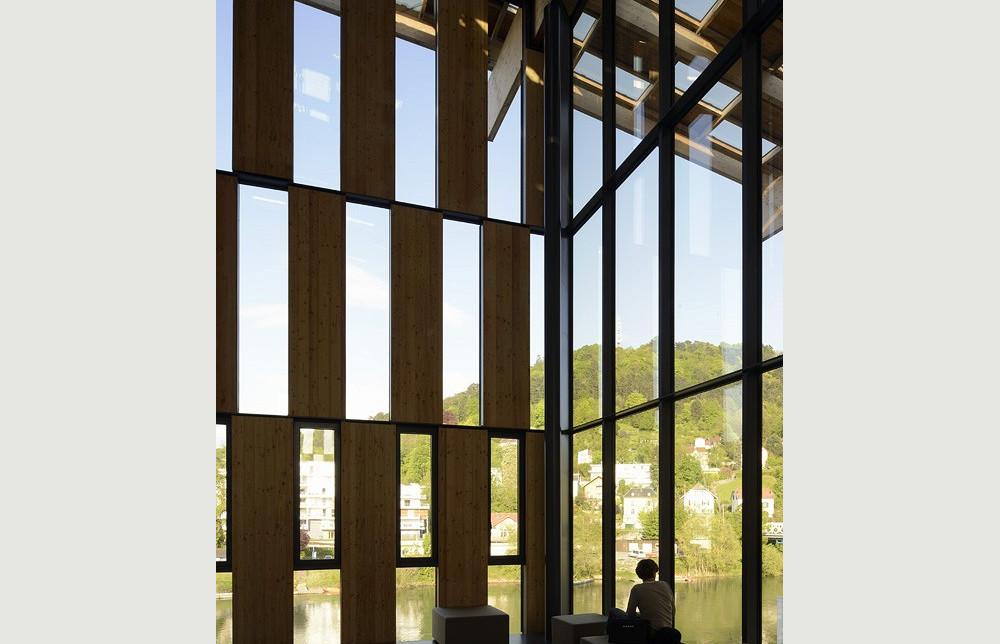 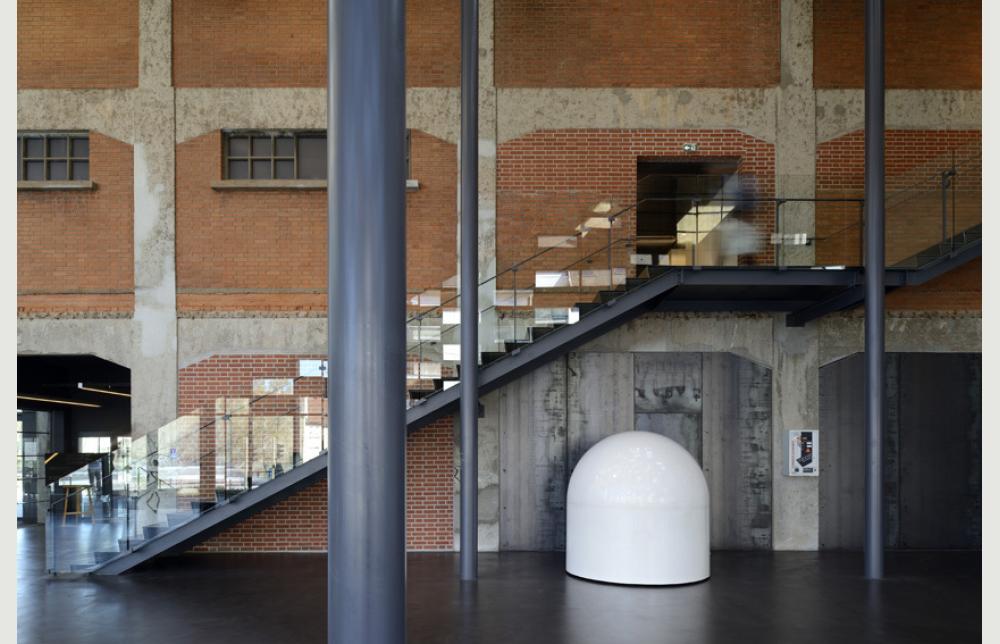 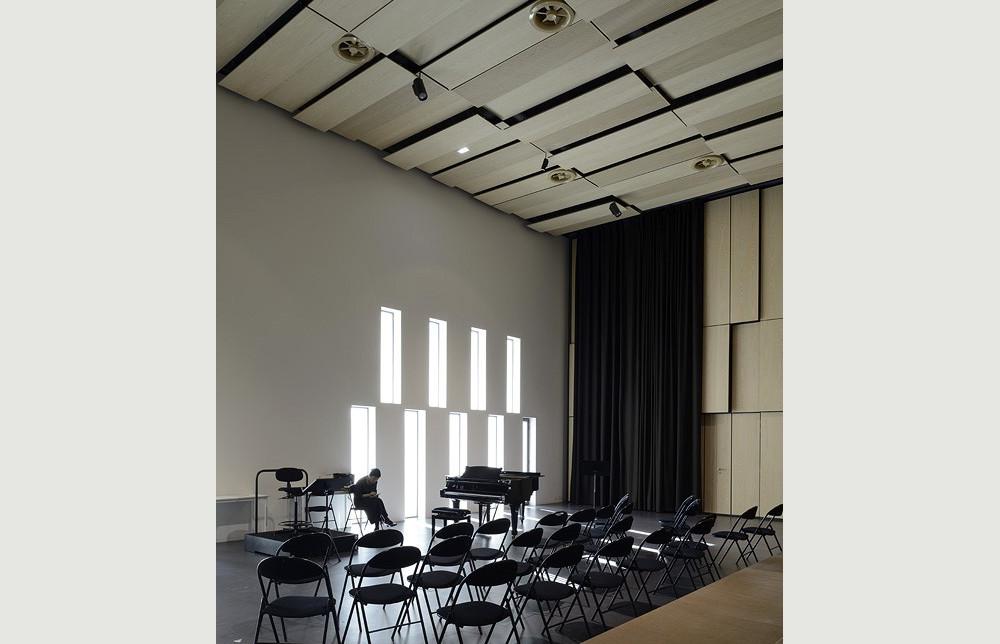 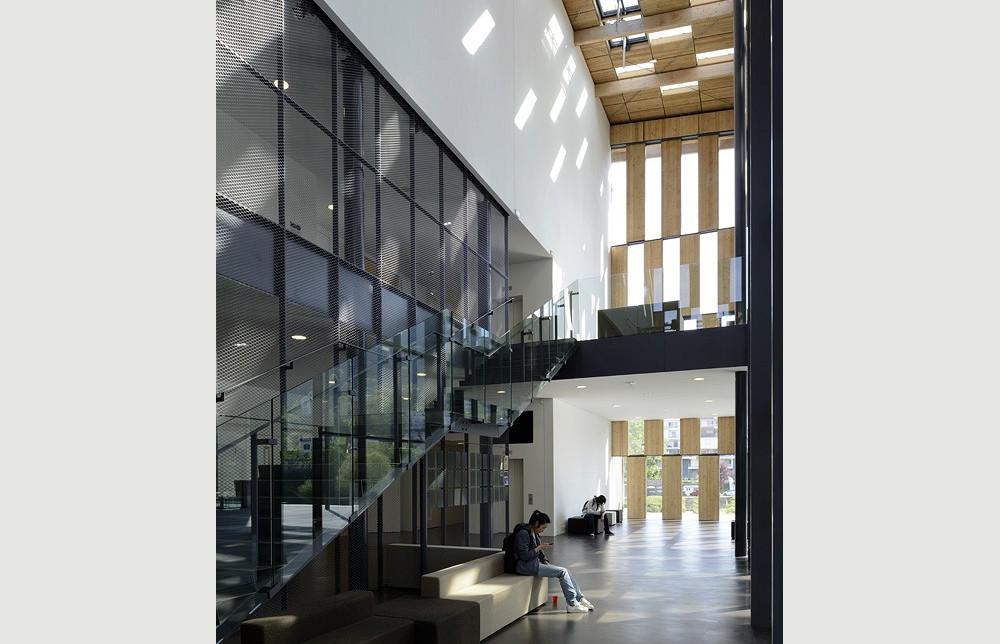 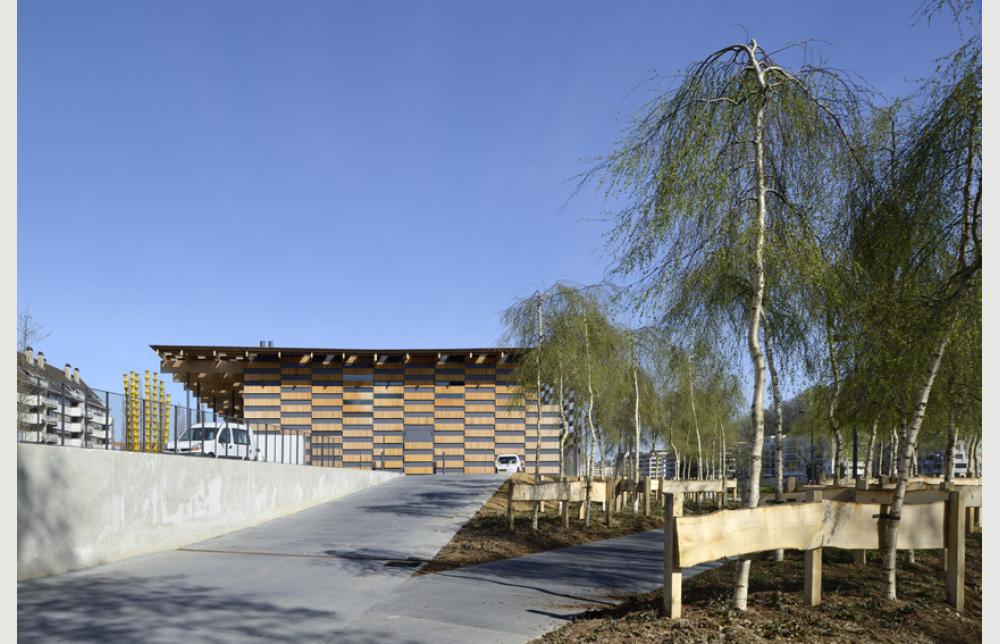 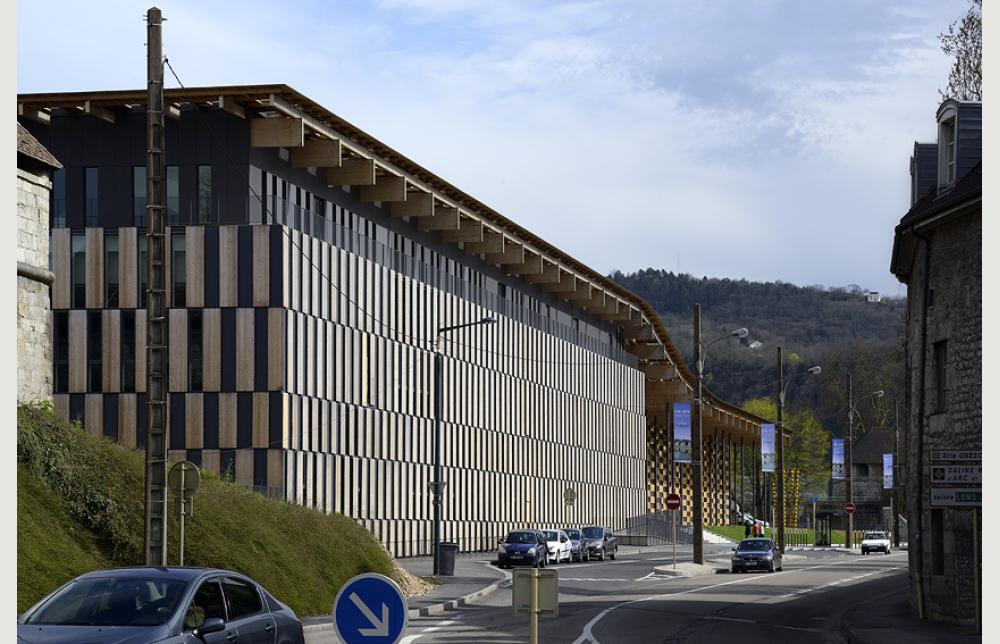 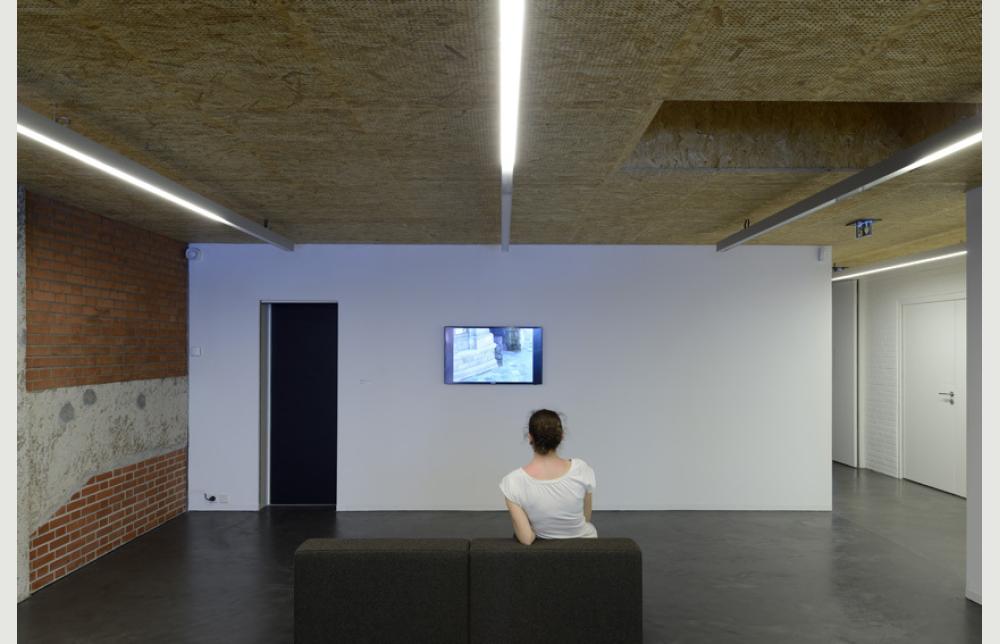 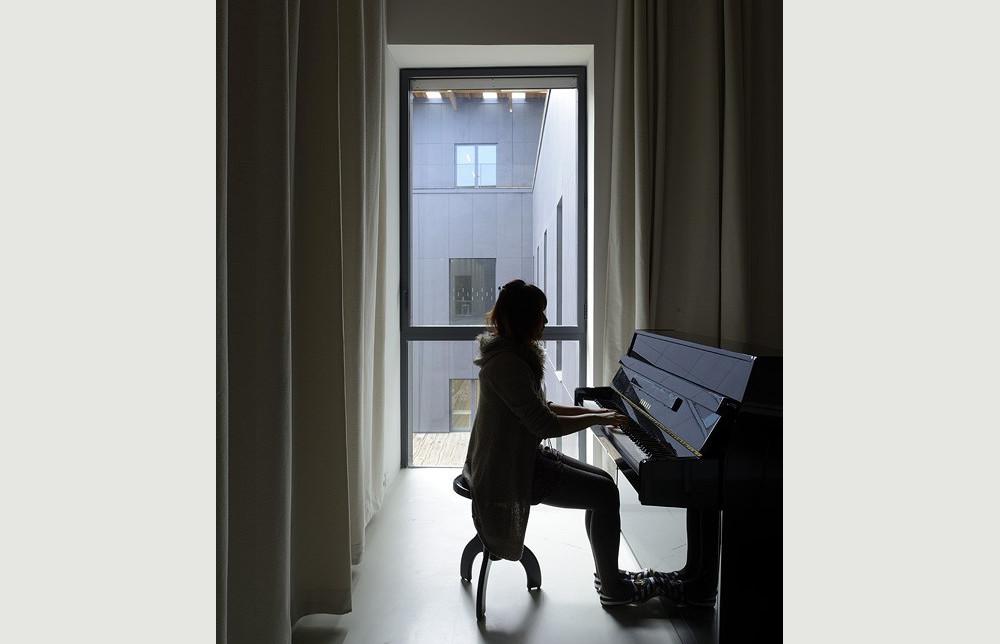 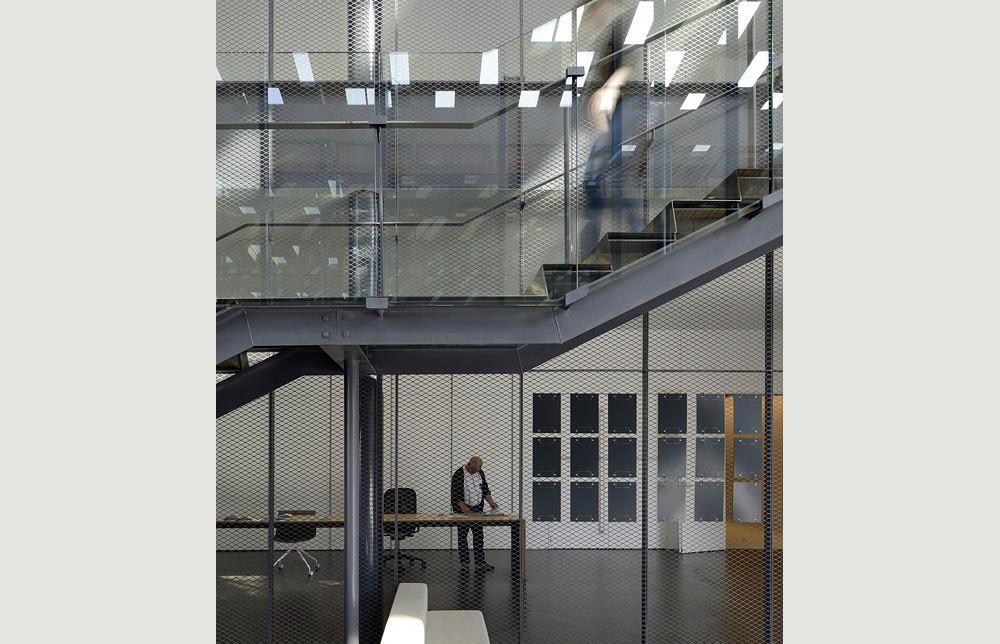 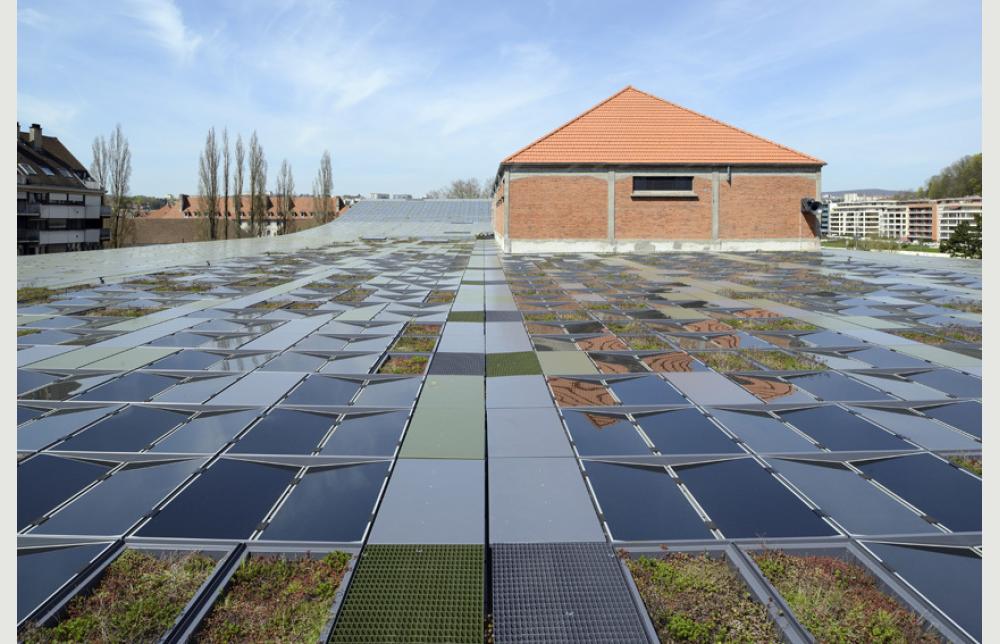 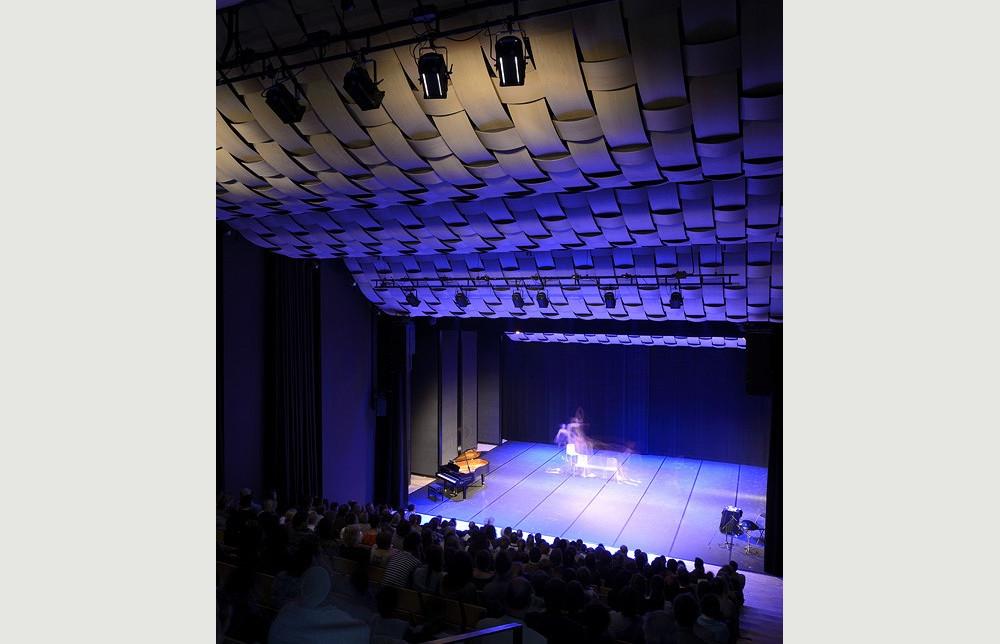 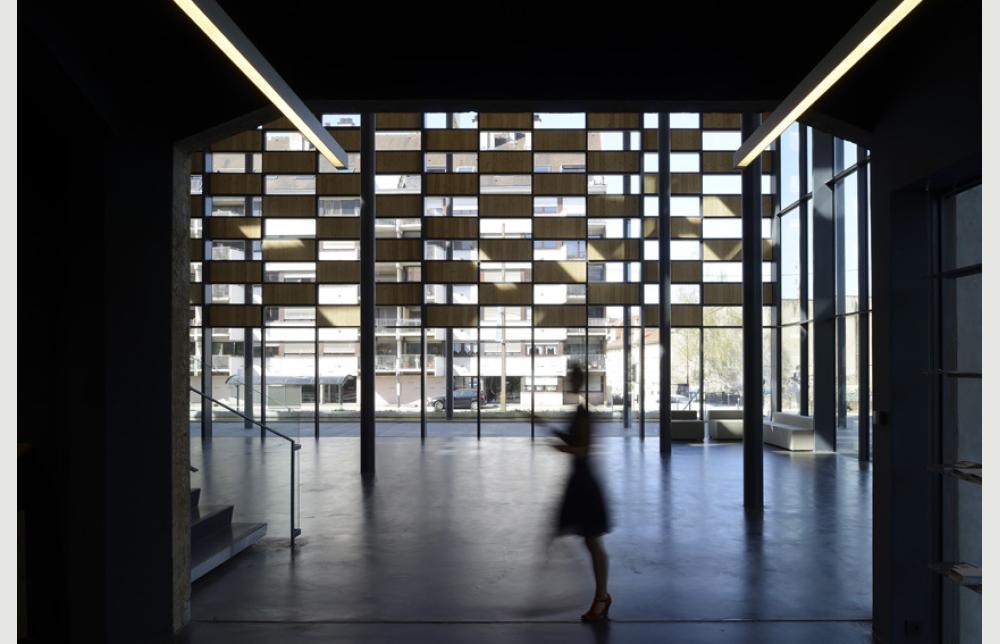 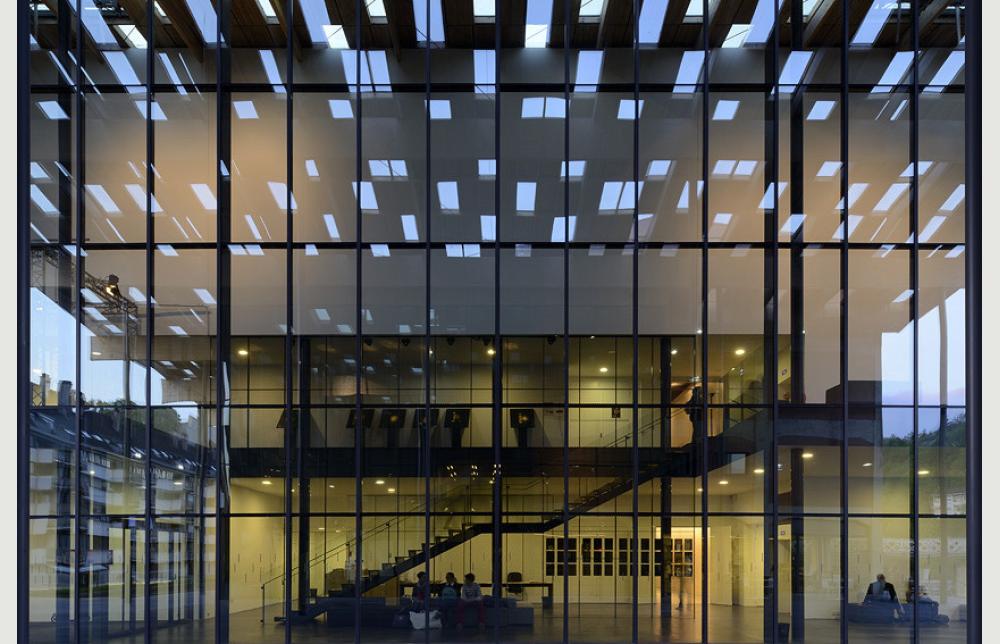 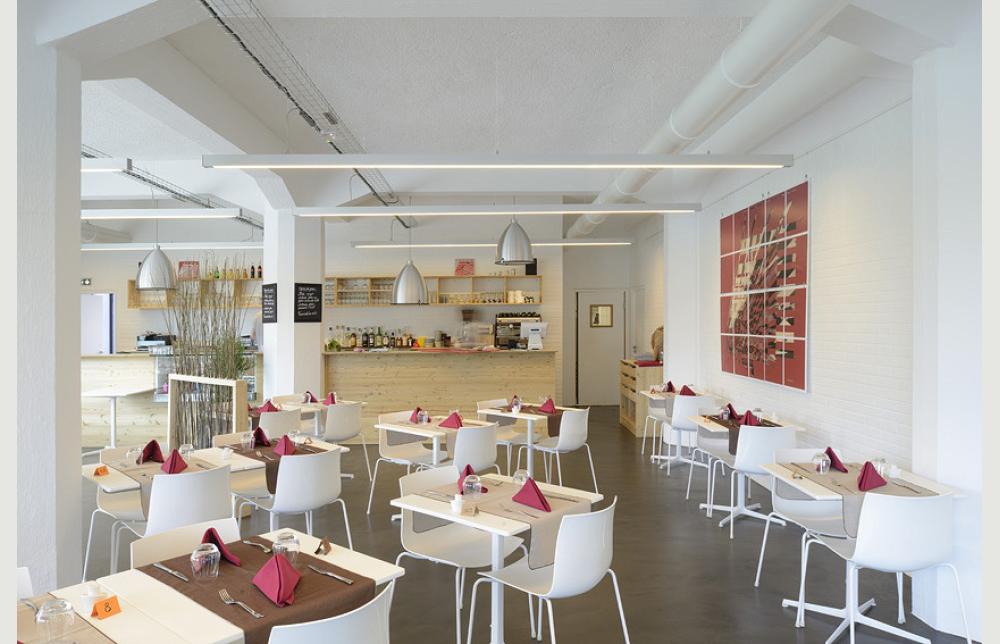 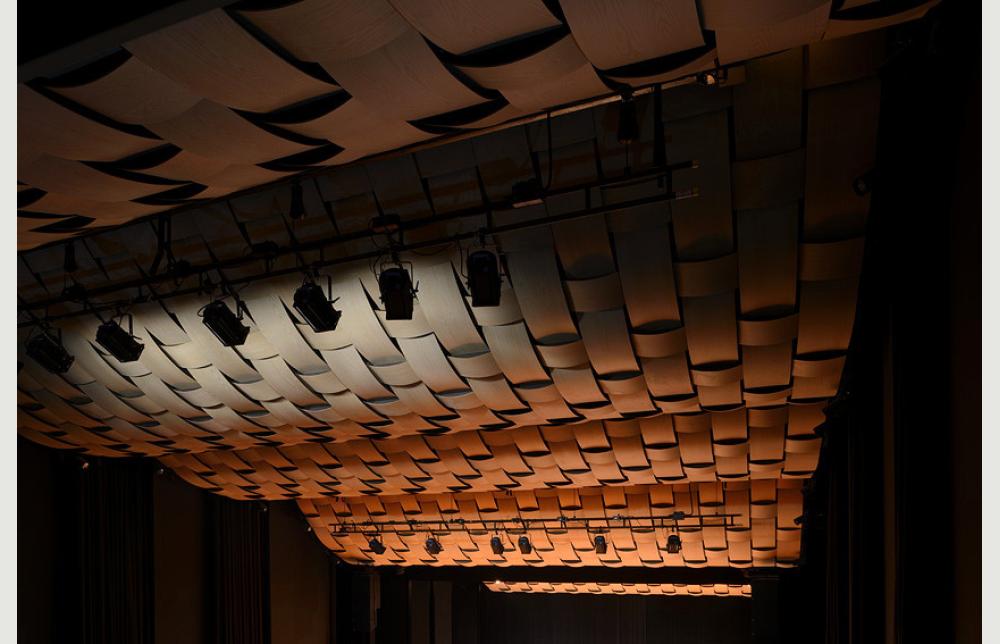 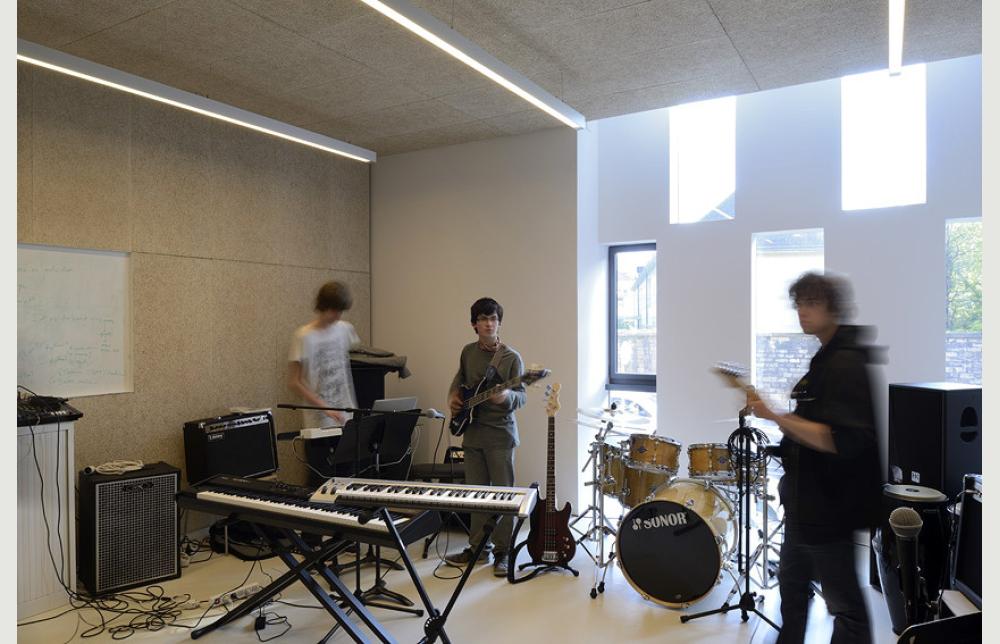 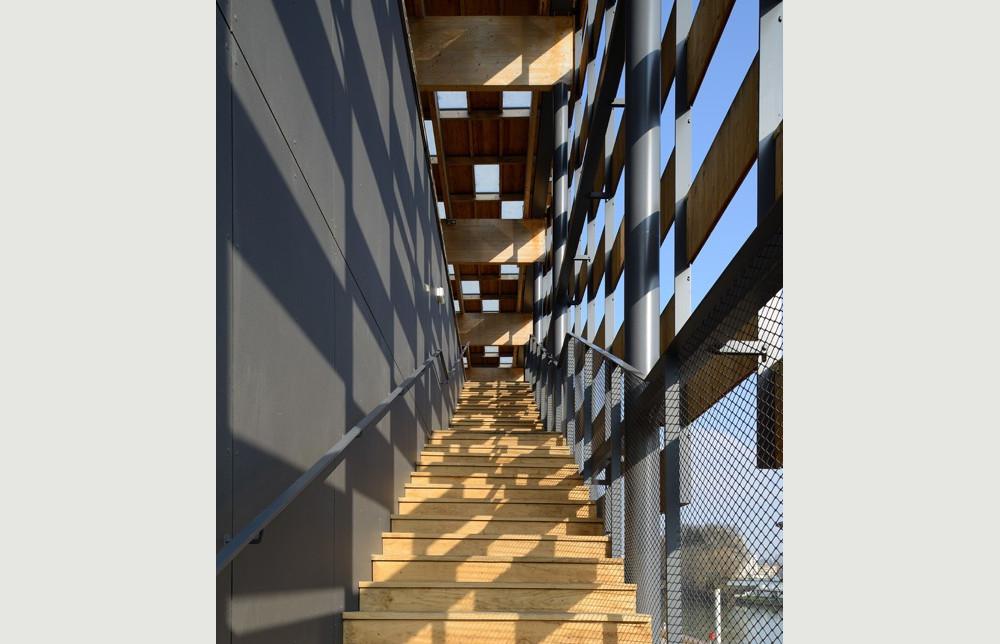 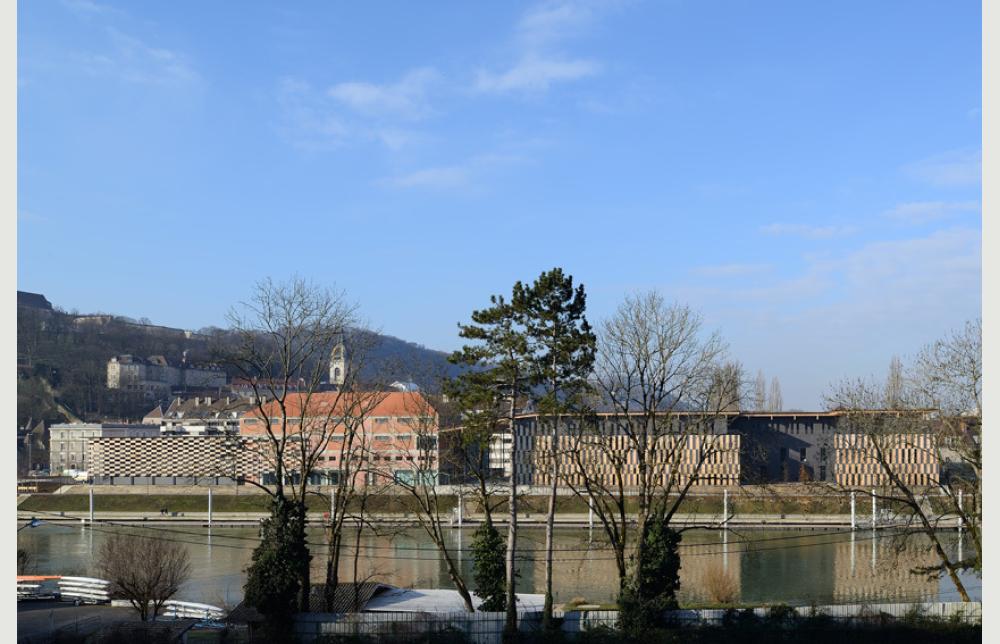 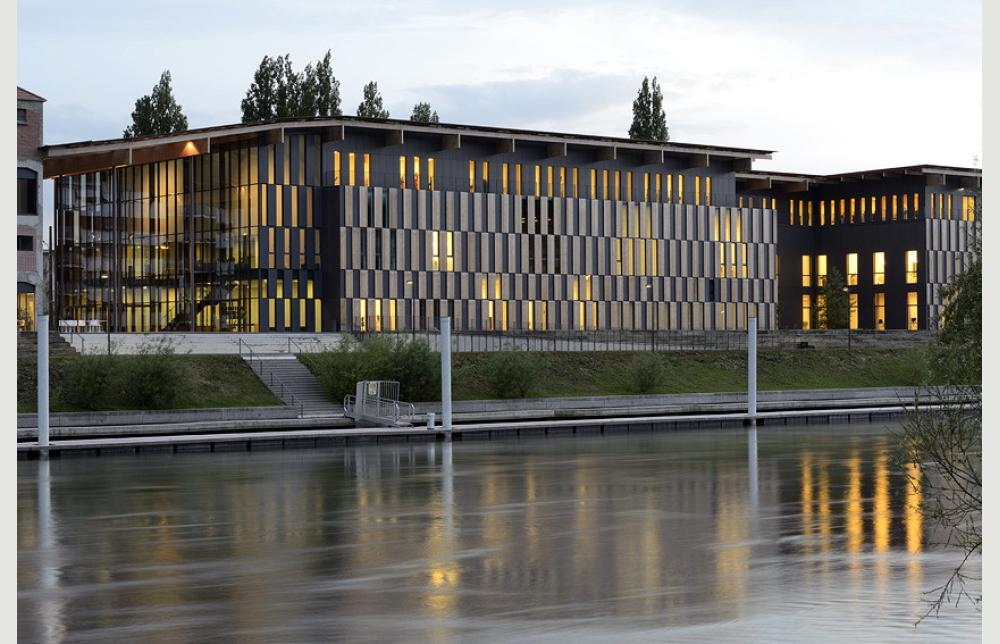 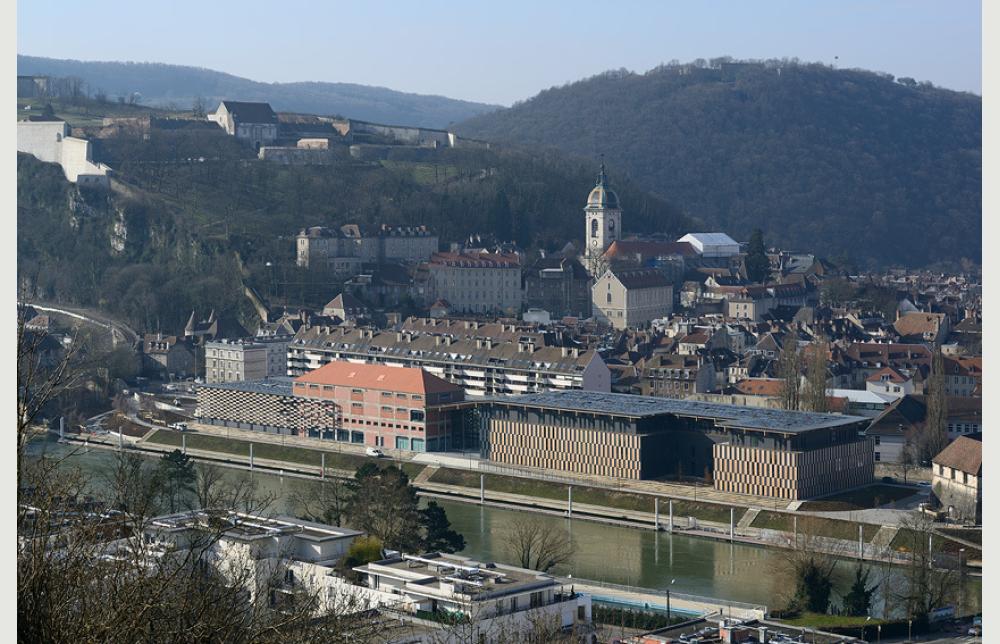 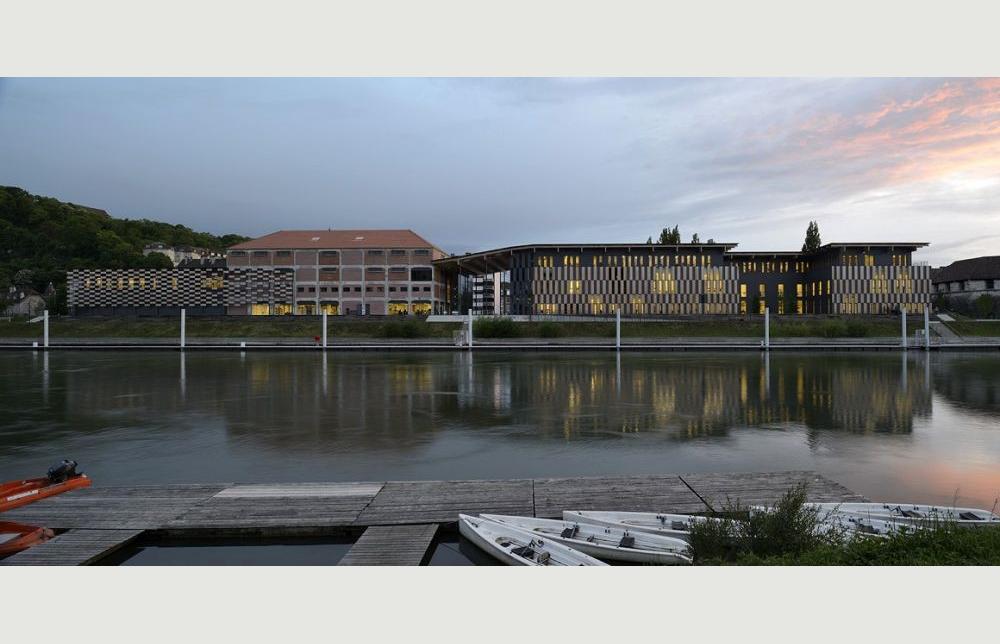 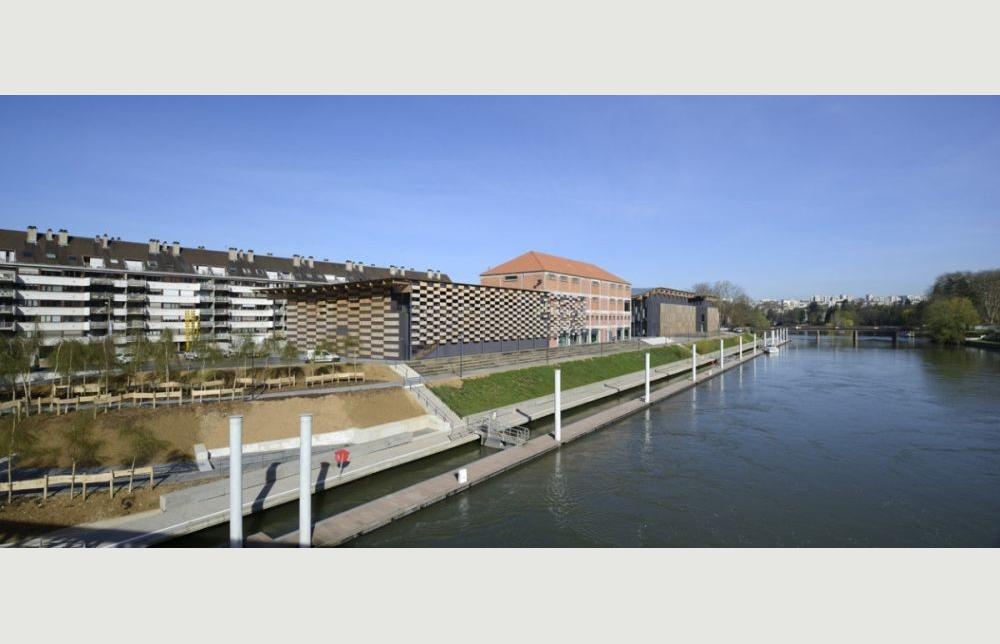 This project is the result of the union between history and architecture, water and light, city and nature. We wish that the Besancon Art and Culture Center strike a chord with the environment by the fusion of the different scale of reading, from the details to the entire project, by blurring the limit between interior and exterior, to create a building able to enter in resonance with his environment: the hills, the river and the city of Besancon. The roof creates the link between the building and his environment and makes the project blatant. Semi-transparent, the roof symbolizes the fusion between built and not-built and act as camouflage when people discover it from the Citadelle which is height overlooking. It is an invitation to the citizen to gather below his protection. It symbolized the encounter between the city and the nature, the citizen and the riverbank, the public and the culture.

The site brings with itself both its own history and the history of the city. The riverbank always has been either a protection or a barrier. The project is a continuity of this history, his longitudinal geometry is following the orientation given by Vauban, the warehouse, old storage of wood, is kept and participate in the richness of the building. The Besancon Art and Culture Center perpetuate the notion of protection, but can be read as well as a monumental gate between the city and the river, outstanding object and symbol of the unification of the city and his river. It is a landmark, recognizable by a sober design and the quality of his materiality. We wish to reinforce the genius loci of the site trough a strong and clearly identifiable building, but still respecting the relationship with the existing bastion, the river and the city.

Unified below the large roof, the two functions are identifiable by subtle differences in the patterns of the façade composed by wood panels and steel panels. The pattern dimensions are for the FRAC: 5000 X 2500 Horizontal while for the CRR 1625 X half floor height vertically. The Frac is partially located in the old brick warehouse building. After taking out two of the existing slabs, the void created is containing the main exhibition room. The large lobby of the FRAC is as much as possible transparent, open to both “art passage” and city side. The natural top light is diffused thanks to the random positioned glass panels of the roof, in order to achieve to communicate the feeling of being below a canopy of tree, where the light gently come through leaves down to the ground. The CRR is more an introverted space, except for his lobby which is 14 m height and largely transparent. Both lobby of FRAC and CRR are connected by the roof, creating a semi-outdoor space, the “art passage”, which is flooded of natural light through the semi-transparent roof. This passage, a large void, is structuring the overall buildings: it acts simultaneously as a gate and a shelter; it emphasizes the particularity of this project witch gathering two different functions.

The roof is the emblematic and unifying element of the project. Composed in a random way with different element such as glass, solar panel, vegetation and metal panels with different color finish, the natural light vibrates on its surface, depending of the absorption and reflection of the different elements composing it. It creates a pixelized layer where the apparent aleatory position of the “ pixels” define a unique image, abstract and confounded with the environment hue. The transparency is partially defined by the necessity of the program below: opaque on top of the rooms such as classroom, administration, or exhibition room. It gets more transparent when it is on top of the lobby or when it is covering the outdoor spaces. Suspended by a wood framework, this fifth façade made of variation of transparency and opacity represent a unique and innovative design, a thin pixelized layer floating on top of the Doubs river and becoming at night a landmark reinforcing the entrance of the city. The only element emerging from the roof is the old ware house converted in exhibition gallery, reminding the industrial period of the site.

The landscape design takes part in the pedestrian path along the river: it extend and connect the existing promenade. The main constrain of the site is the flood risk. We have reinforced the embankment and built on top of that dike. This is the reason why the building is installed on top of a pedestal. This pedestal can be physically experimented walking below the “art passage” semi-outdoor space, overhanging the street and connected to the river by a large stair. The CRR is organized around a garden, called « harmony garden », a wet garden combining moss and low trees. In continuity with the “art passage”, along the FRAC, a water pond planted with filtering rush is creating the soft transition between the city and the building. Partially covered by the semi-transparent roof, the shadow and light variations interweaves with the reflections on the reflection pond.

The interior design is mainly structured by the façade and roof patterns, filtering the natural light. Wood, glass, or metal meshes are combined with subtleties in order to generate a peaceful and relaxing atmosphere. The wood frameworks supporting the roofing appear in the lobbies, terraces and in the last floors witch intensify the presence of the roof. The views to the exterior are precisely framed either to the water pond, the river, the double or triple height spaces manage to offer different space experiences.

This place witch always has been perceived as a physical barrier for the citizens (either fortification or industrial area) we propose to generate an open and welcoming cultural centre, a gate and a roof between the river and the city, in harmony with the environment.