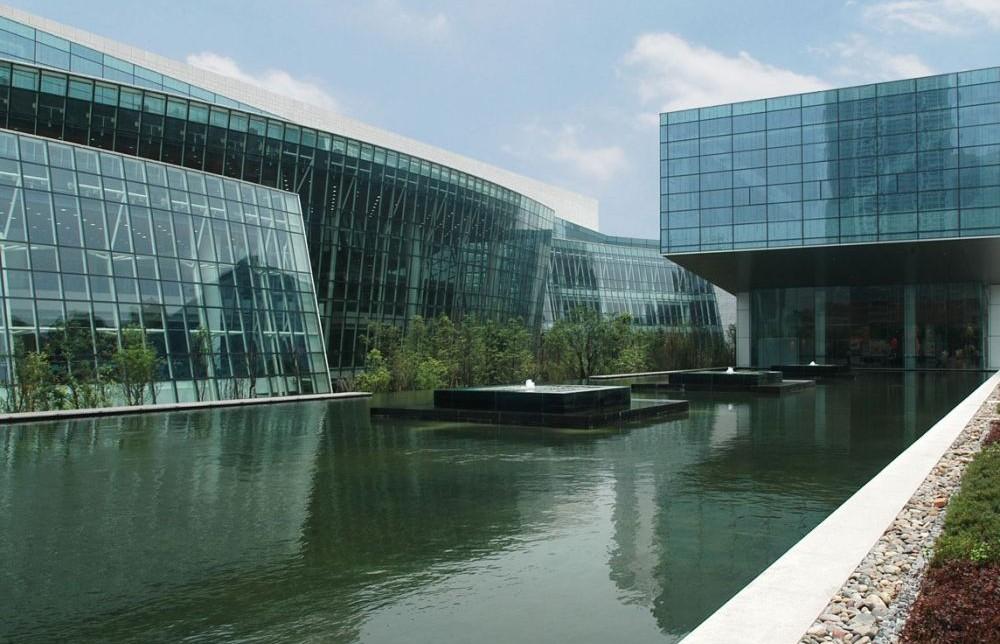 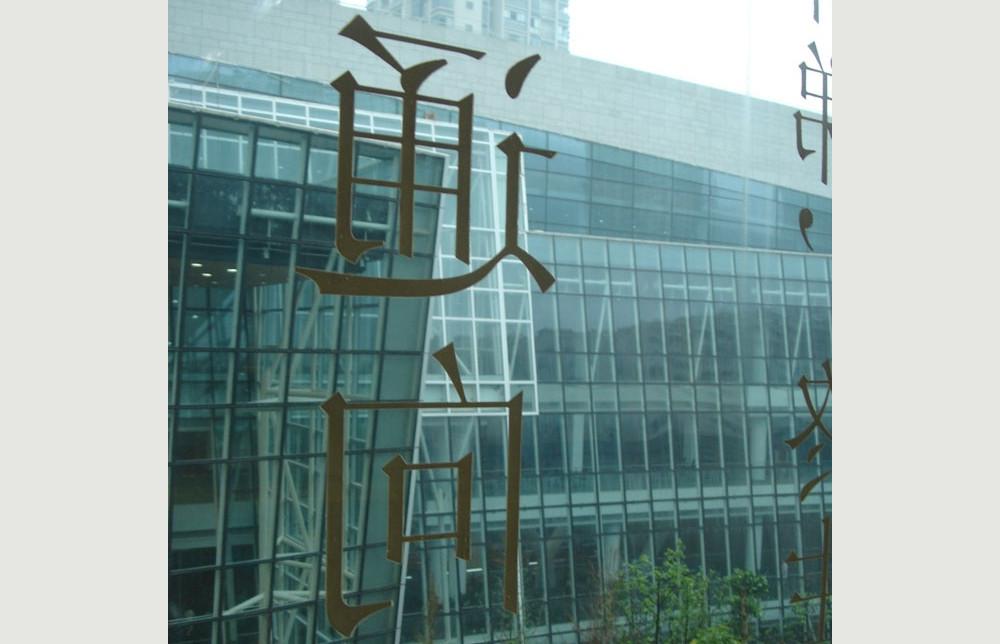 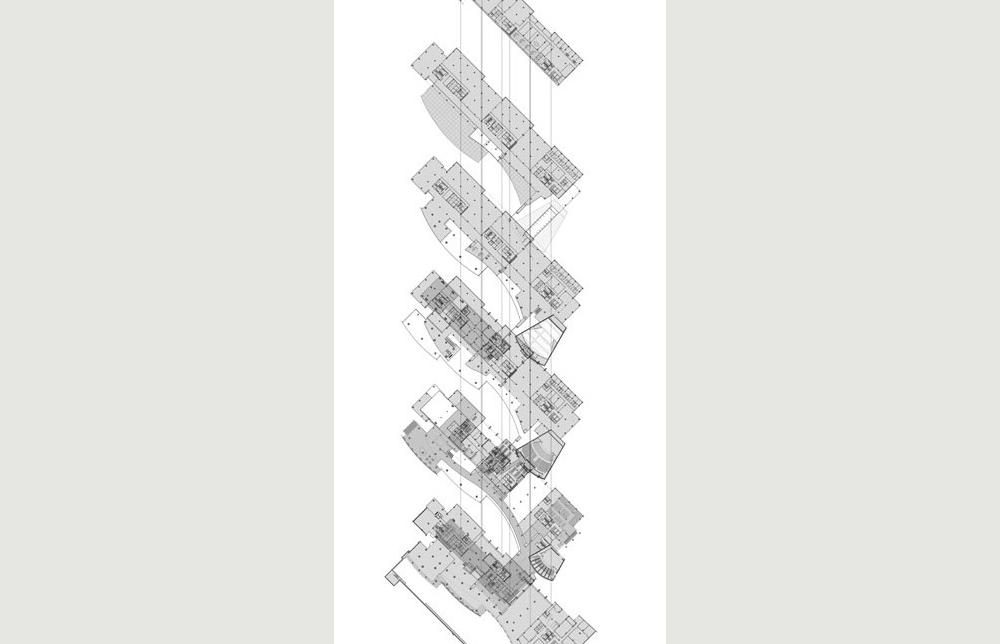 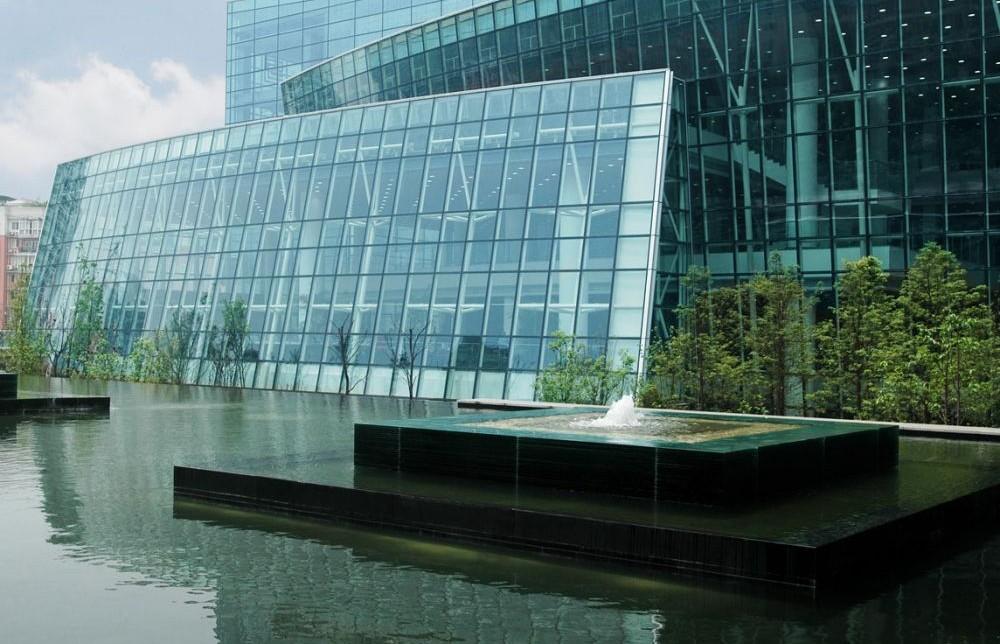 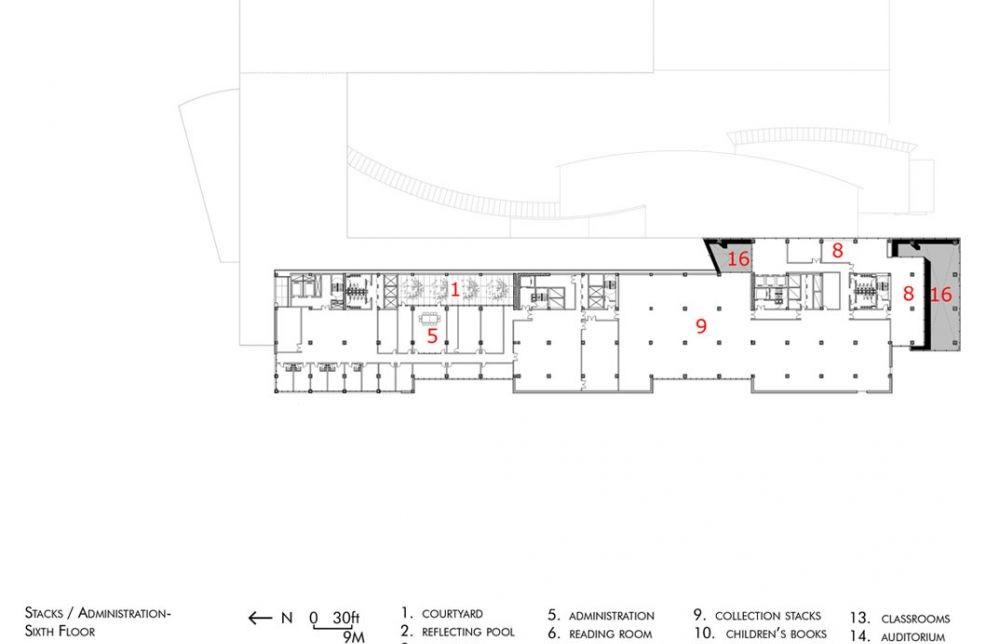 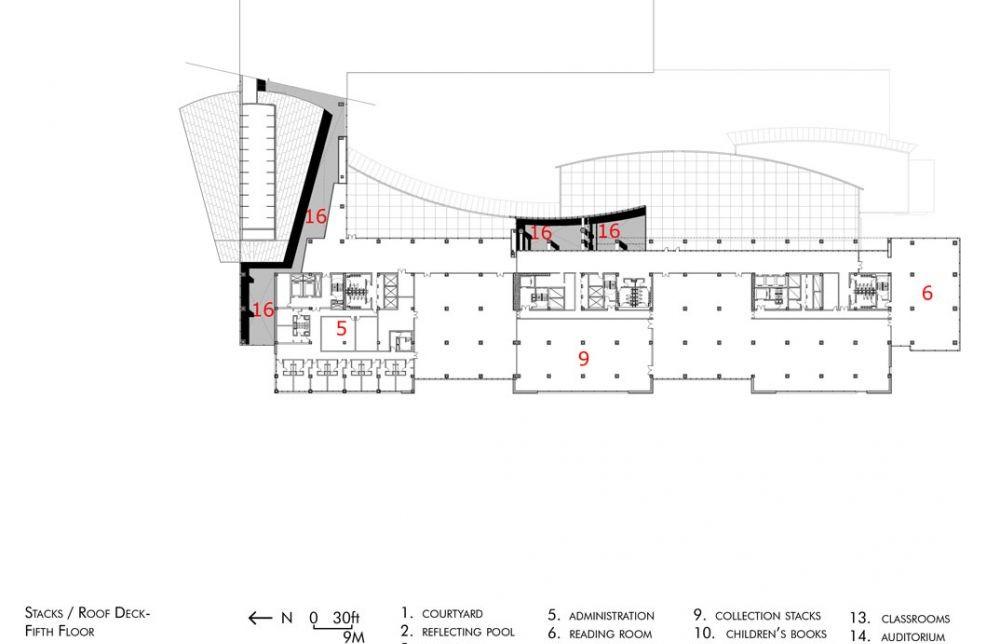 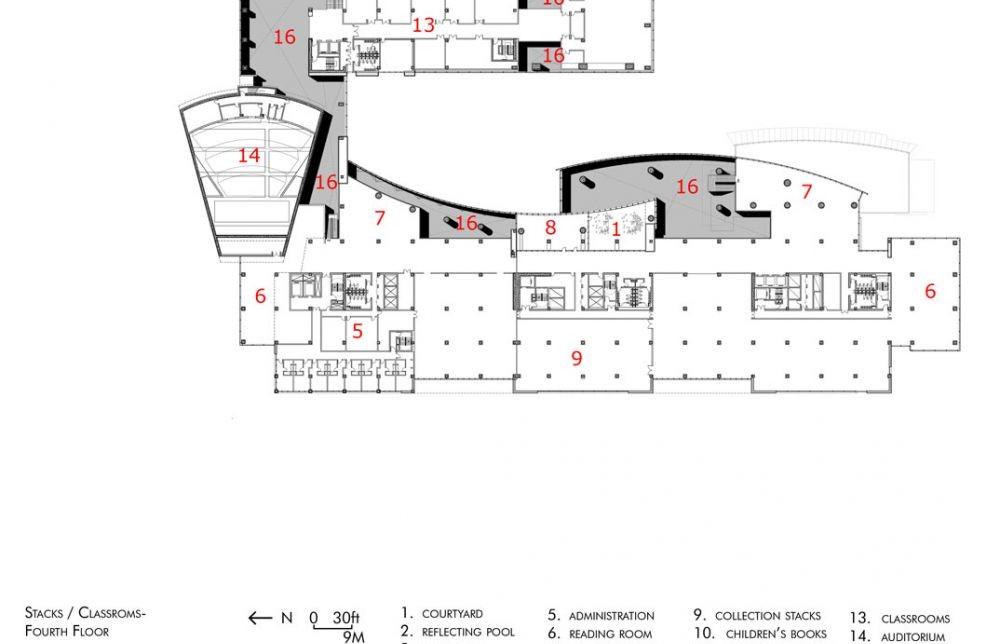 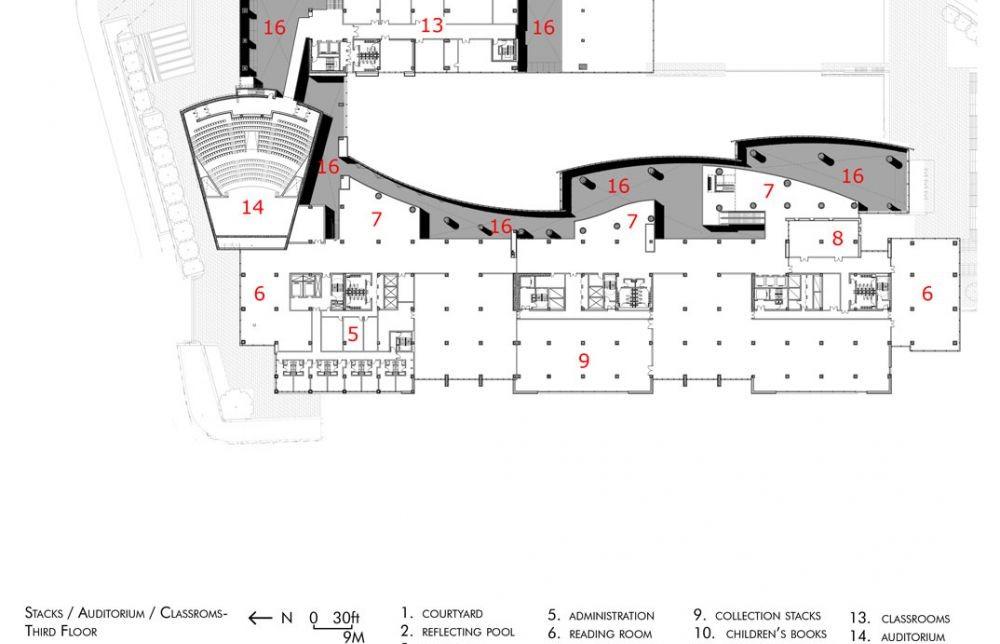 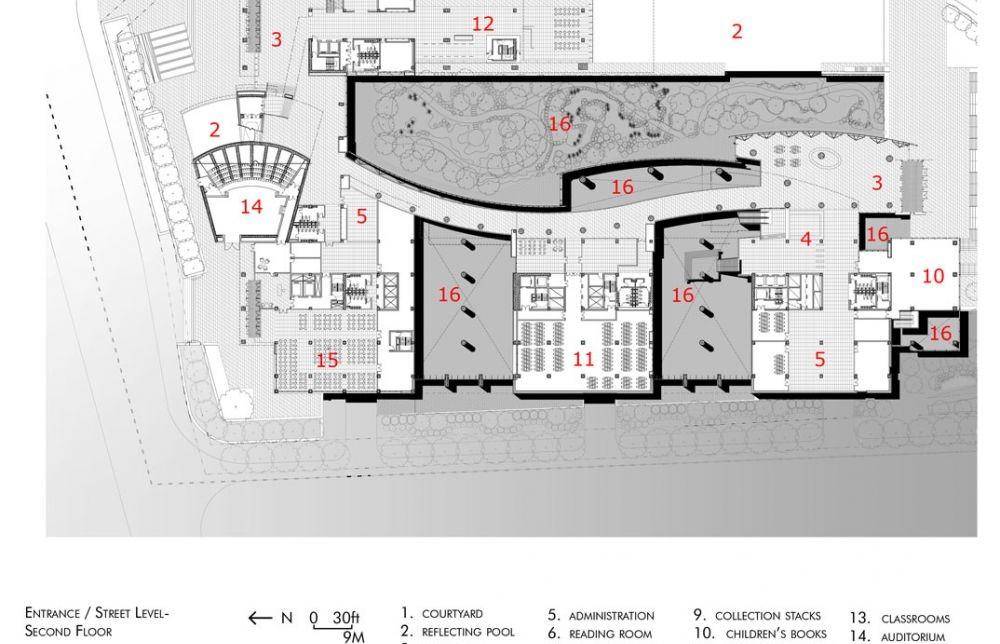 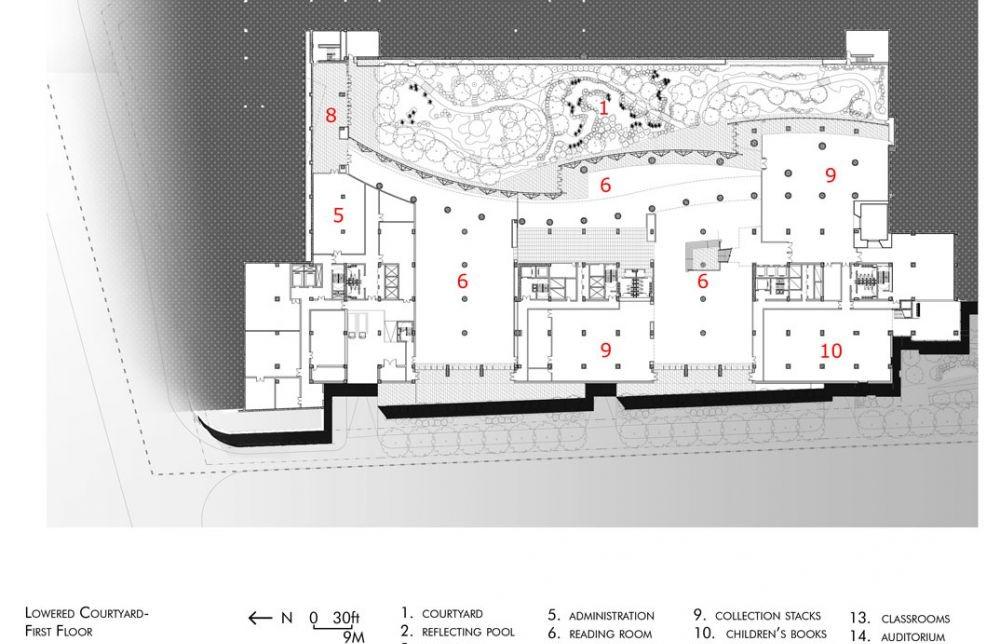 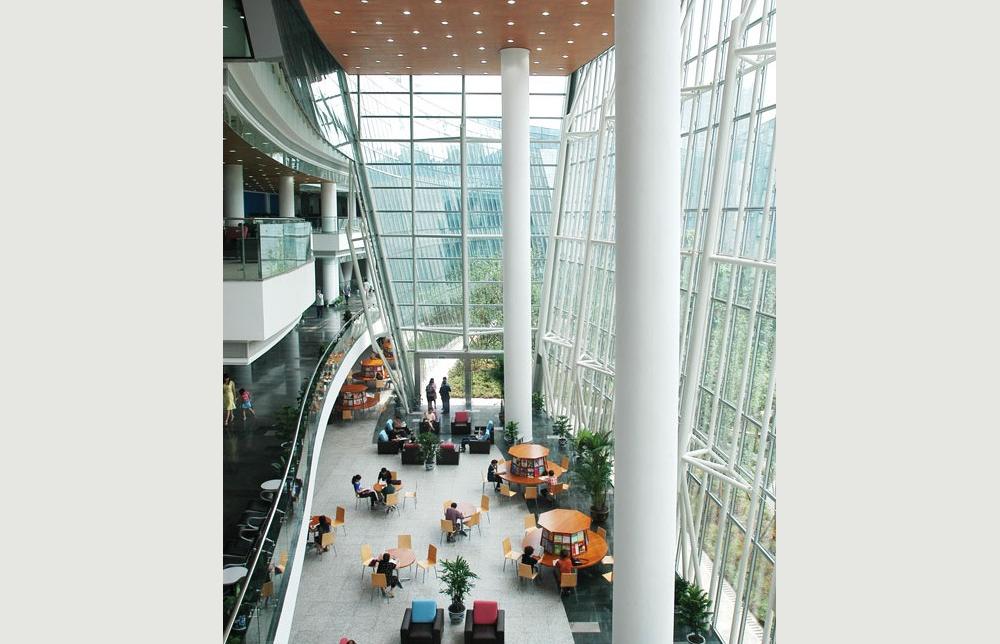 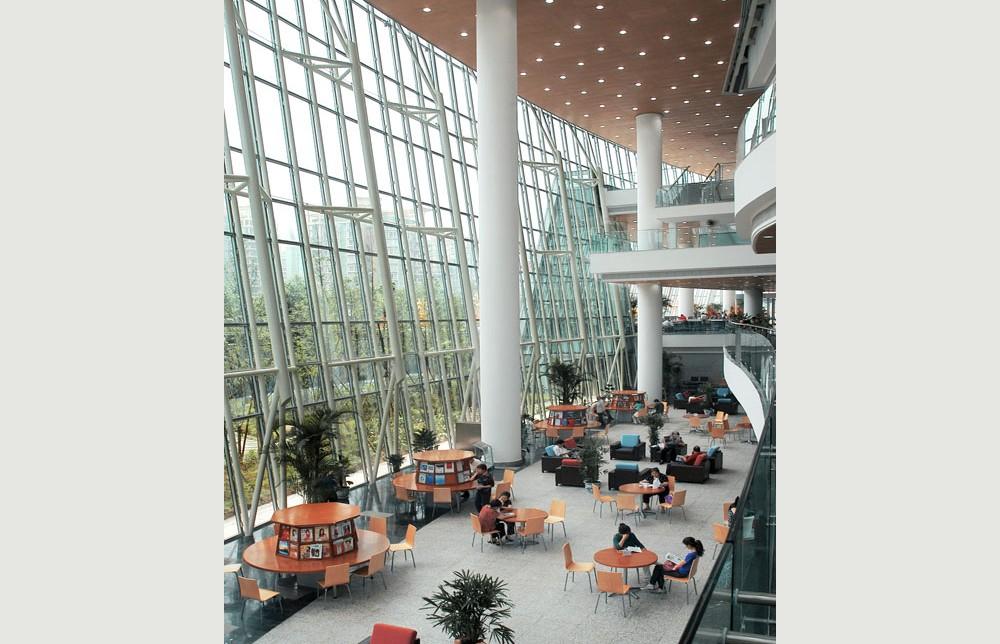 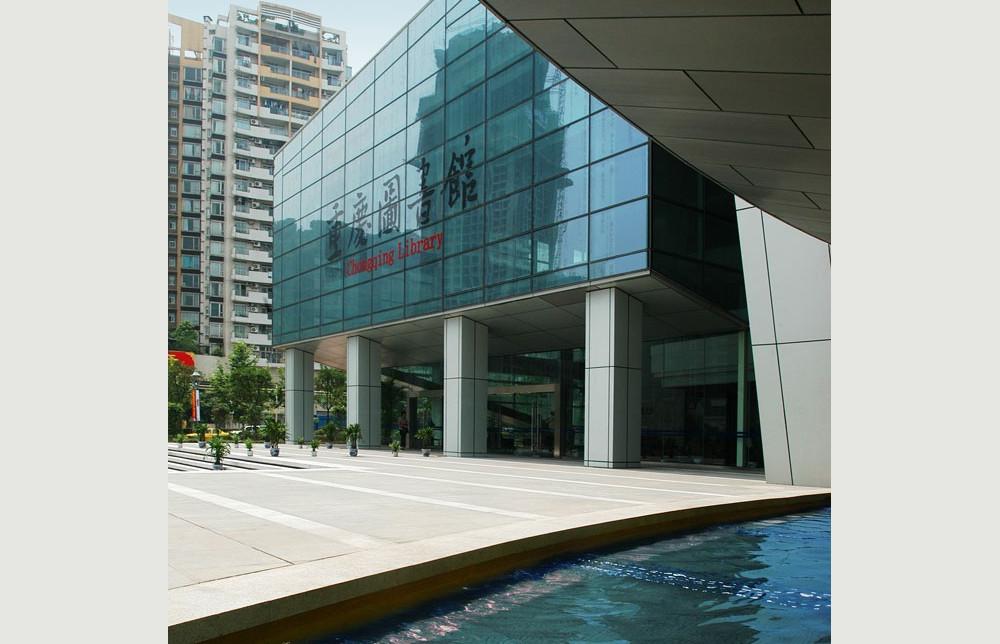 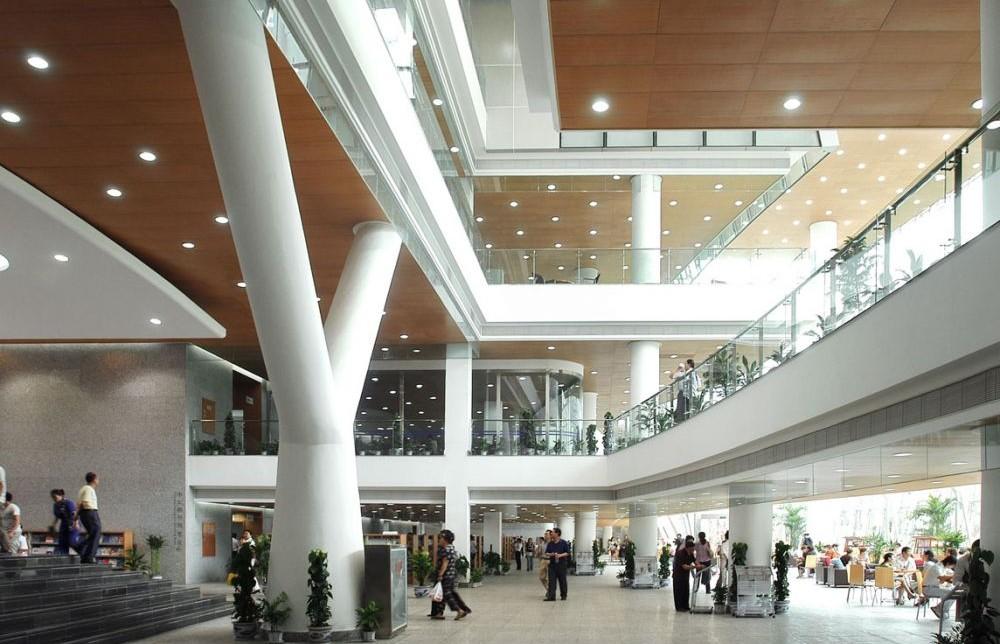 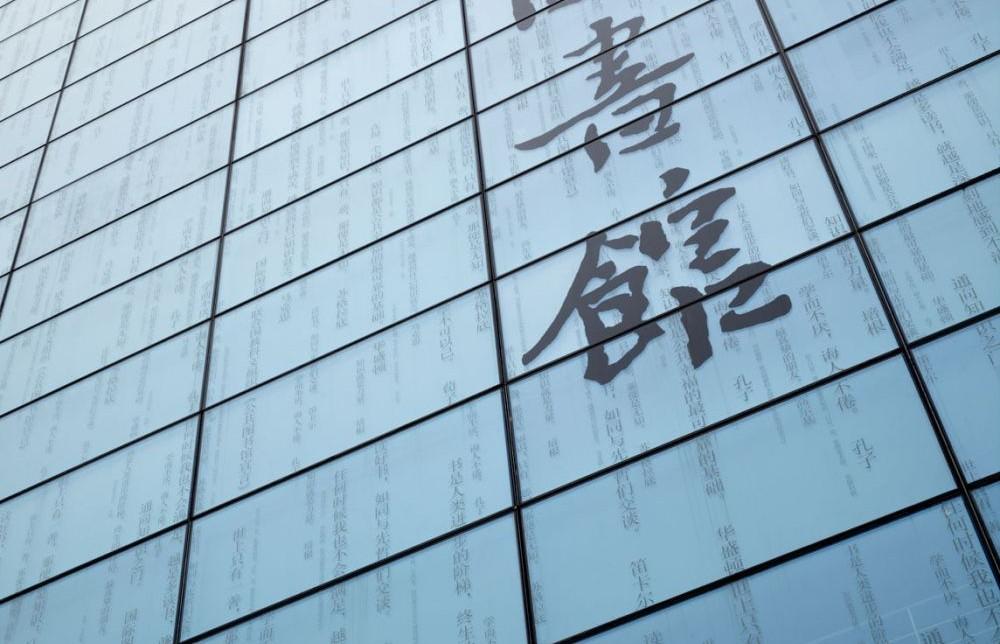 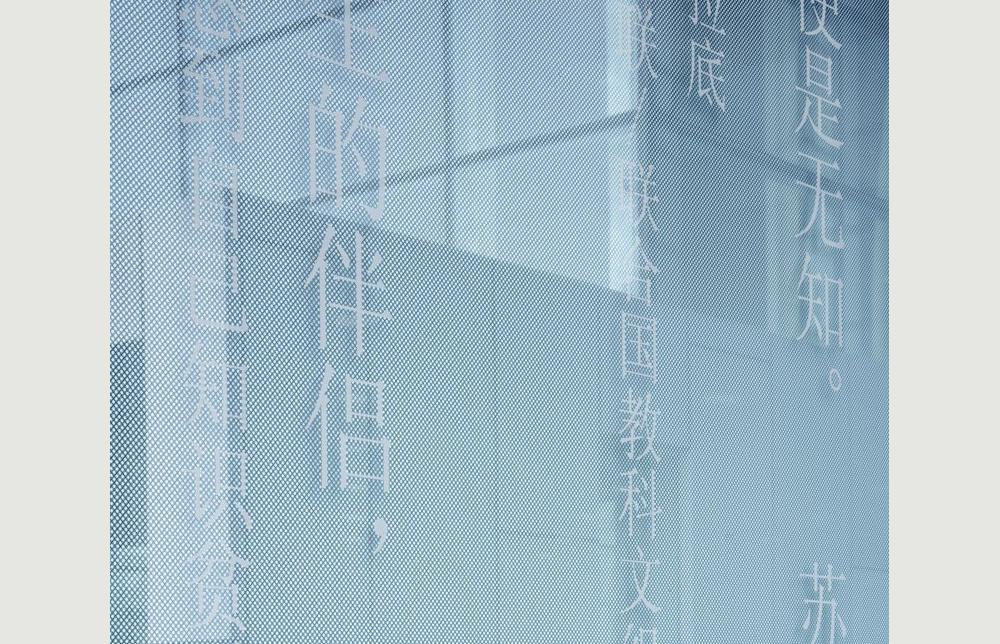 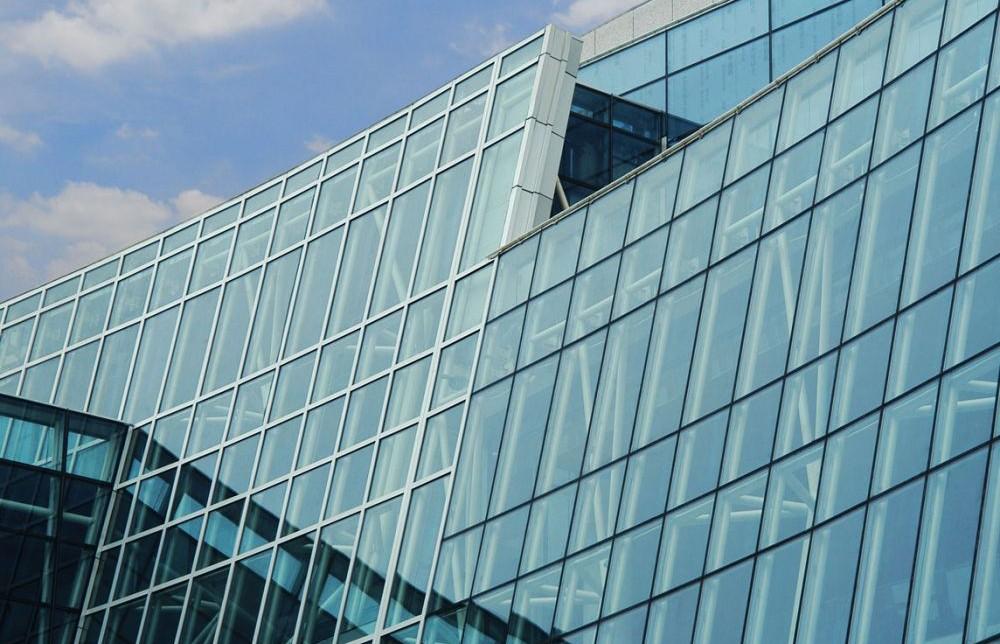 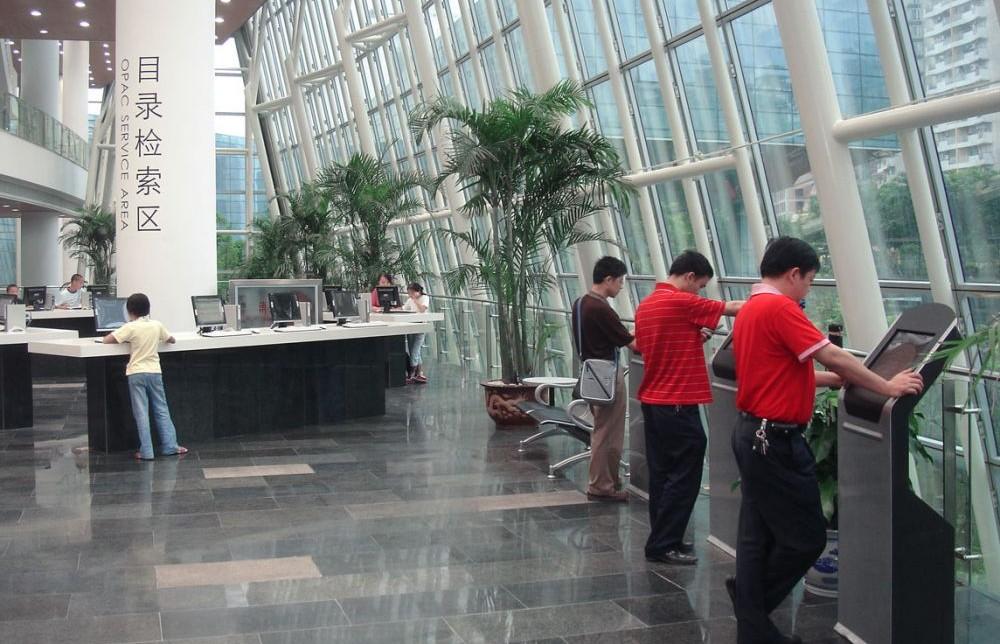 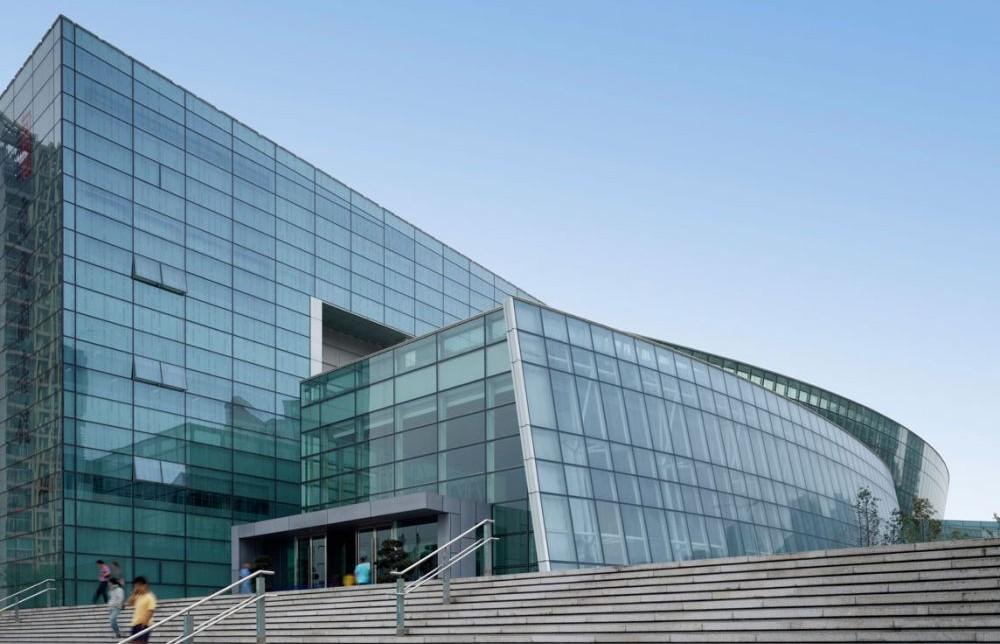 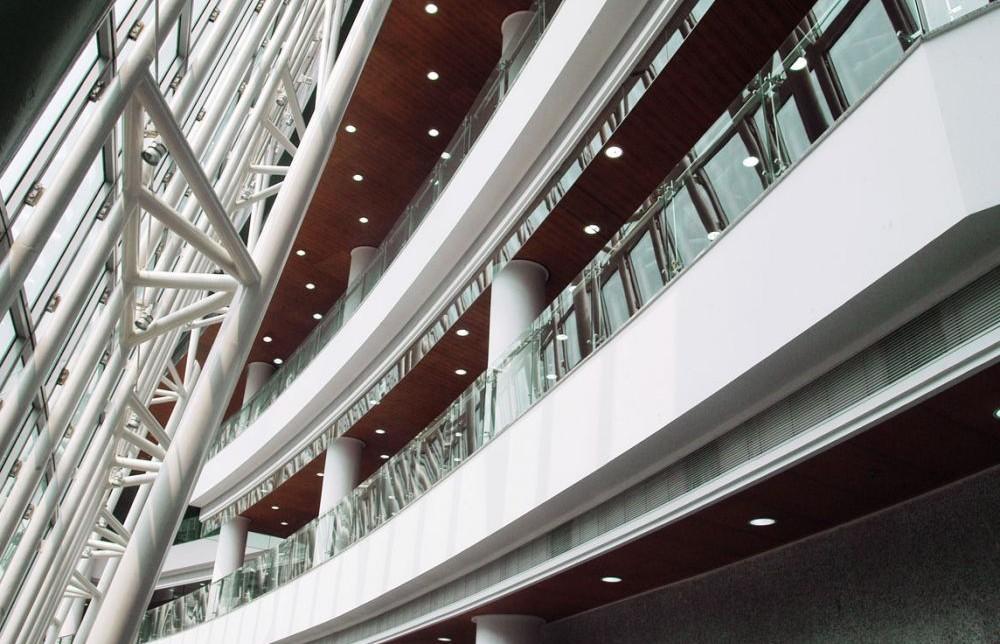 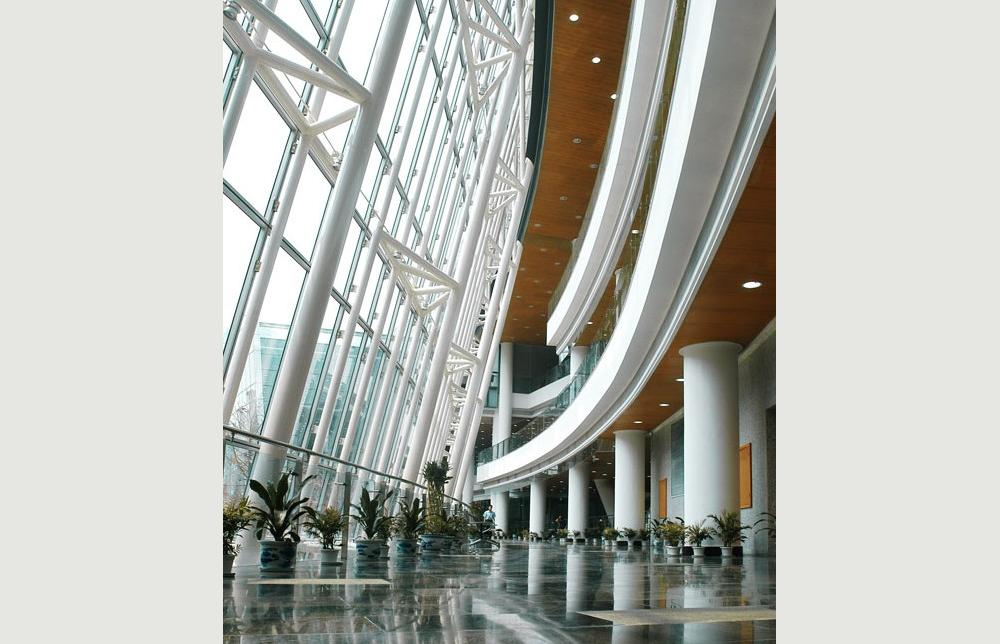 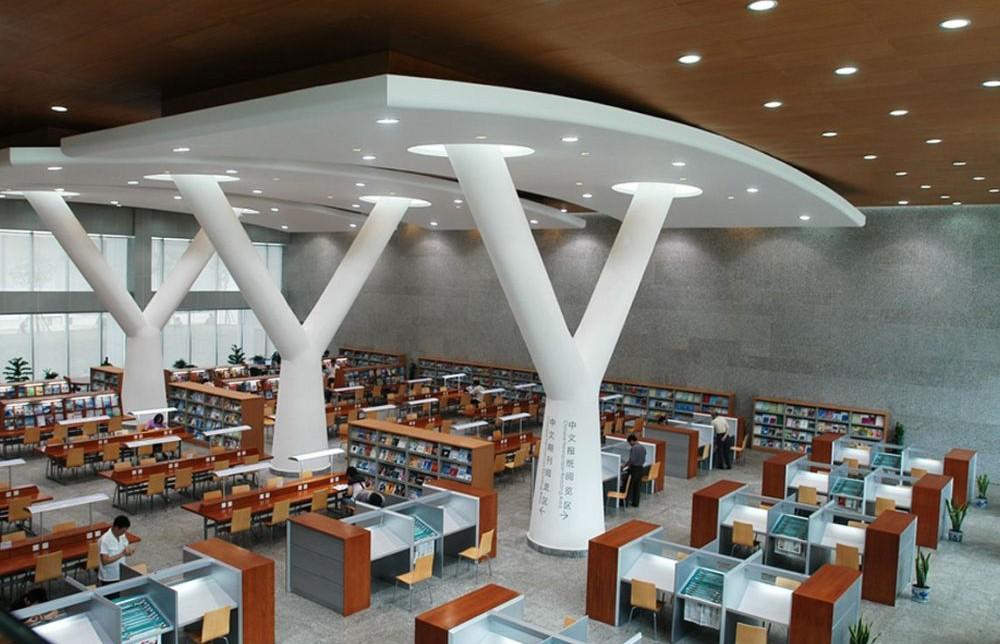 Historical Context
Until recently, the western portions of China, including Chongqing, have not experienced the same pace of growth as eastern China and the coastal regionsa result of the economic reforms of the late 1970s. In 2000, the State Council created a Leadership Group for Western China Development to bolster growth by developing infrastructure, promoting education, and providing the resources for talented residents to stay in the region and contribute to the economy. As of 2006, one trillion Yuan has been spent on the project, and for the past six years the average economic growth rate in the western regions has hovered around 10. Chongqing is vying to be the gateway to the western portion of the country, much like Chicago in the US, which greatly prospered and contributed to Americas western expansion. The new Chongqing Library is an important demonstration of the governments infusion of cultural and economic catalysts for the creation of this gateway.

This commission was won by Perkins Eastman through an international design competition. Allowing an American team to design this important civic cultural building for Chongqing reinforces a long cultural exchange between the City of Chongqing and the United States. During WWII, Chongqing served as the seat of power for the Chinese Nationalist Government after Nanjing fell to the Japanese. While the US maintained a position of neutrality early in the war between China and Japan, by 1941 Roosevelt officially authorized military service personnel of the US Army to participate in the war in China as volunteers. A covert group, the Flying Tigers, made up of discharged pilots and ground men from the American armed services, were recruited to fly and fight for the Republic of China Air Force. The Library houses important papers from this period of history, which is a source of national pride for Chongqing residents.

The Urban Vision
For a city with more than 3,000 years of history and a future as one of the fastest growing commercial centers in China, a library has to be much more than a repository of books. Chongqing, often called Mountain City for its majestic natural features and geography, realized this early on in its plan to develop a world-class library.

Highlighting the institutions importance, in July 2003, the City Party Committee and government named Chongqing Library as one of the top ten construction projects of social and cultural facilities. Achieving its mission statement, the building serves as the main exchange and service center for literature and information collection, designed to accommodate six million volume books and 8,000 readers

It was extremely important to provide a place that emphatically expressed the notion that the exchange of knowledge and ideas is fundamental to the well being of society, and must therefore be free and accessible, said Perkins Eastman Principal, Aaron B. Schwarz, FAIA.

A Transparent Exchange
The previous Chongqing Library, occupying 22,000 sm 236,800 sf, was set up in 1947 as one of five National Chinese Libraries. Under the design leadership of Perkins Eastman, Chongqing Library evolved into a stunning design for a 50,000 sm 540,000 sf urban complex. The program of the Chongqing Library exemplifies a transformation from a house for books into a cultural center which includes a public theater, exhibition hall, open computer learning facilities, ancient archives, and reading rooms. The center is a major destination for learningoffering hotel rooms for scholars overnight stays, a conferencing center for symposia, a restaurant, and a caf.

To convey the importance of this new city landmark, the design team predicated their concept on the notion that reading, learning, knowledge, and the exchange of ideas needs to be free, open, and accessible to all of the publica basic belief shared by the government and the library leaders. To reinforce this notion, Perkins Eastman sheathed the building almost entirely in glass so that the public could readily see the inside of the building and the actively engaged visitors. The architects inscribed this glass faade with a text pattern that idealizes the profound impact of life-long learning on individuals and society. The design team researched and selected quotes from scholars throughout historyfrom world leaders such as Chairman Mao and President Roosevelt to renowned philosophers including Socrates and Confuciusall related to the empowerment, knowledge, and freedom one gains from words and books.

The buildings form is based on both the Chinese architectural tradition of the courtyard and the interior multi-story atrium halls of traditional western libraries. The courtyard of the Chongqing Library deviates from these traditions in that it is visibly open to public. Approaching the library, visitors see a sculptural reflecting pool that gently cascades into the central courtyard garden oasis, one level below the public sidewalk level. The outdoor courtyard spaces provide a unique oasis within the bustling city, visible from the street level but sunken below grade to achieve separation from the active urban streetscape and only accessible through the secured buildings reading rooms. The water, trees, and building are symbolic of Chongqings significant historic and geological mountain location at the convergence of two of Chinas important rivers the Yangtze and the Jialing, where the headwaters here form the beginning of Chinas famous river gorges.

The boundaries between inside and outside are purposely blurred, allowing the buildings users to feel that they are in a place of nature and serenity. The buildings interior reading rooms are envisioned as floating platforms among the forest. Readers can view from platform to platform, which provides a variety of smaller, intimate reading areas while allowing for visual interest. Y shaped concrete columns support light canopies over reference areas. Stone is used both as an exterior and interior material, with patterns and colors matching the older buildings and streets of the city.

Articulation of Urban Space
The buildings design is modern and evocative of the traditional form of the courtyard. Three main programmatic elements-the open public access zone, secure public zone, and the private secure zone-are built around a center courtyard garden that acts as an experiential space or a scenic opportunity from the adjacent reading rooms and caf.

The design uses glass and stone to articulate public and private areas of the library. The public areas facing Feng Tian Avenue are sheathed in glass to connote transparency and visibility for users and pedestrians. It also provides a visual transition from the public plaza to the public areas of the library. The book stacks and service areas to the west are clad in stone to represent security and the solidity of the librarys collection. The stone pattern also reflects the design of older buildings in Chongqing, linking the library to the citys architectural heritage as it looks to the future.

Rather than allow the avenue to divide the site into two pieces, the design incorporates the sloping, active streetscape within the project. The building creates Chongqings Library Plaza marking this very important cultural place and intersection in the city. This plaza is described by cascading water, formal plantings, stairs, and bridges. Whether passing through or stopping to explore, visitors will be constantly aware of the soaring glass reading rooms that overlook the central garden courtyard. The curved form of the reading rooms, sloping roofscape of the surrounding book stacks and exhibition spaces, and cascading ground plane and water elements all recall the geological terrain and surrounding landscape of Chongqing.

The Impact
The Library and Cultural Center contributes to Chongqings evolving image as a cosmopolitan and business center. As a cultural and civic icon, the new library synthesizes both contemporary and traditional design elements, contrasting local materials like stone with striking glass facades. The design eliminates the traditional distinctions between outside and inside, reinforcing the ideal that learning and knowledge should be open and transparent. The platforms of space inside the building allow each user to become a voyeur establishing visual connections to the others in the center and creating a shared sense of community.

Since opening, a flood of users have kept the center busy as they take advantage of the technology and resource materials, fostering opportunities for success in Chongqings growing economy. According to a municipal library official, daily receptions average more than 3,000 readersfour times more than the old librarys average of 600 readers. With the free exchange of ideas and knowledge the center promotes a more democratic environment for the Chinese people, reinforced by the open, visually inviting design.

The project was recently awarded by the American Institute of Architects/American Library Association with a Library Building Award for design excellence.