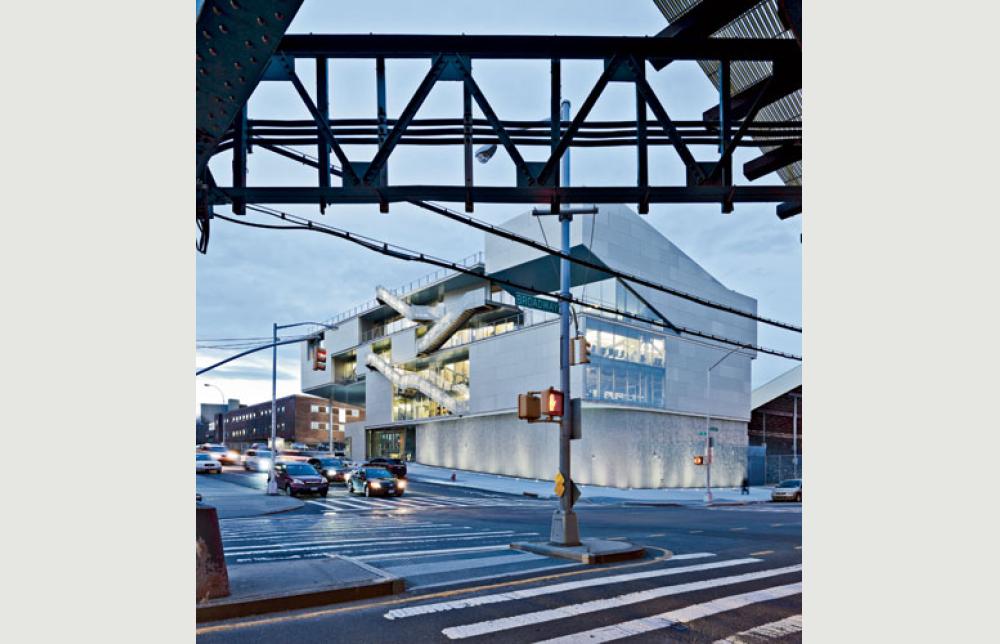 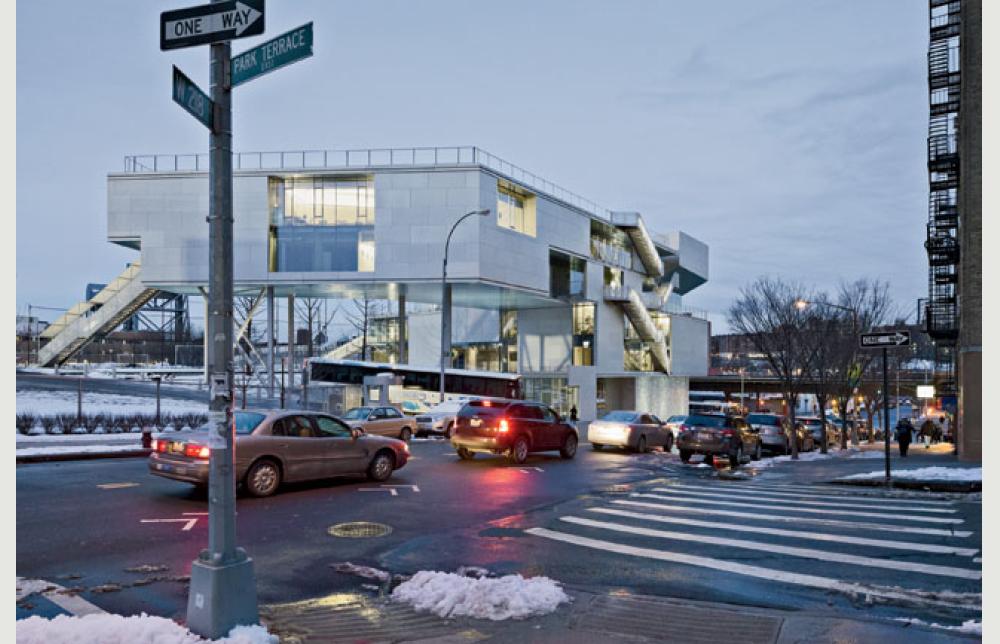 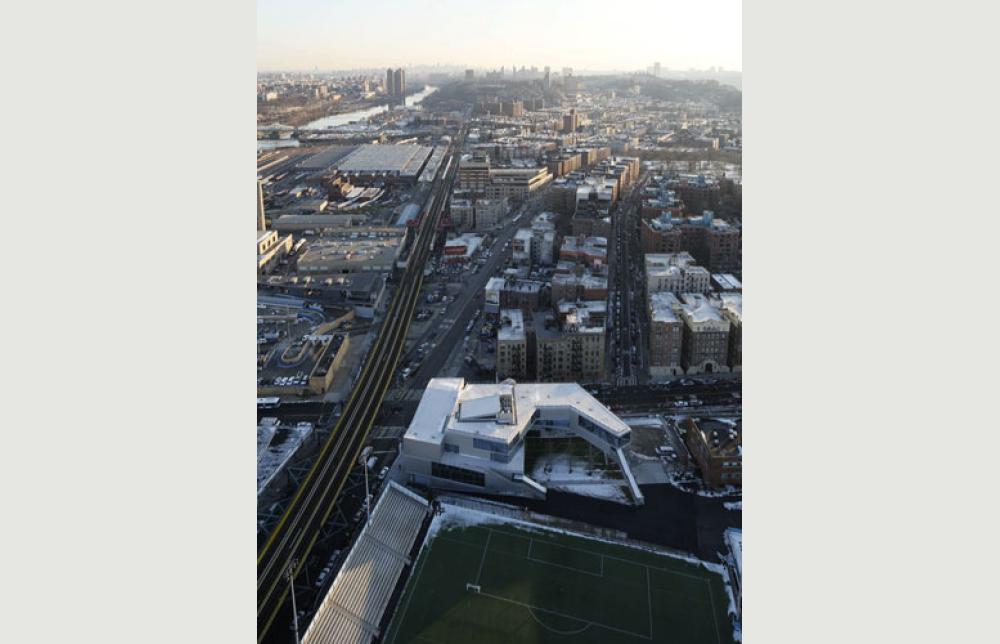 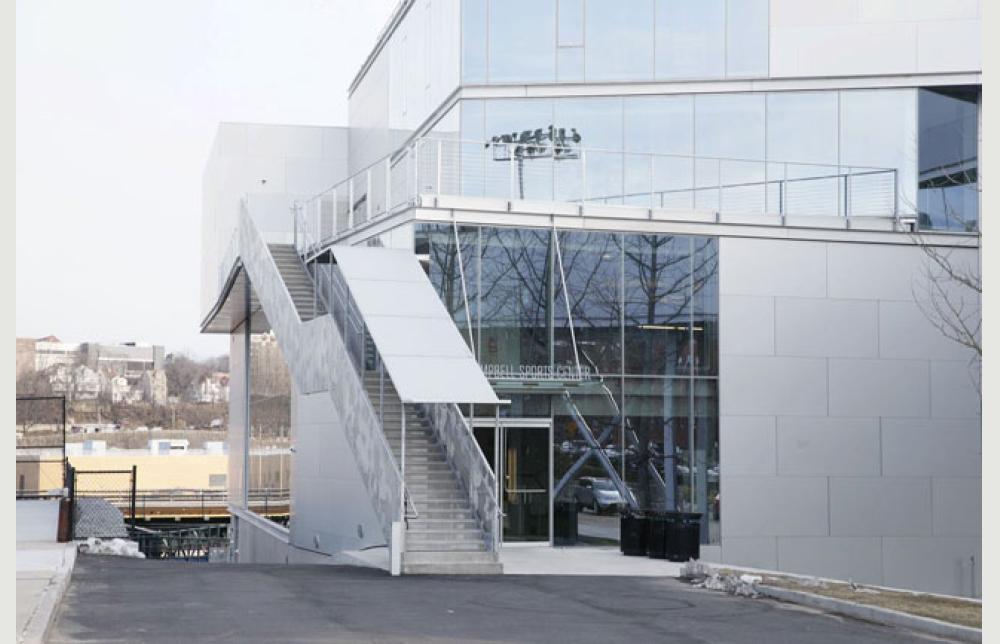 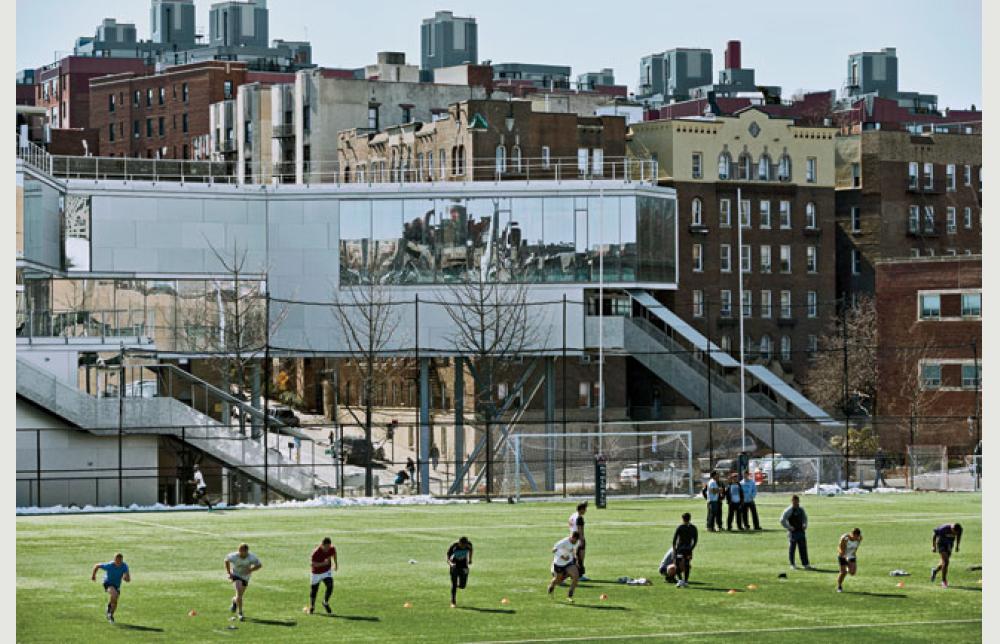 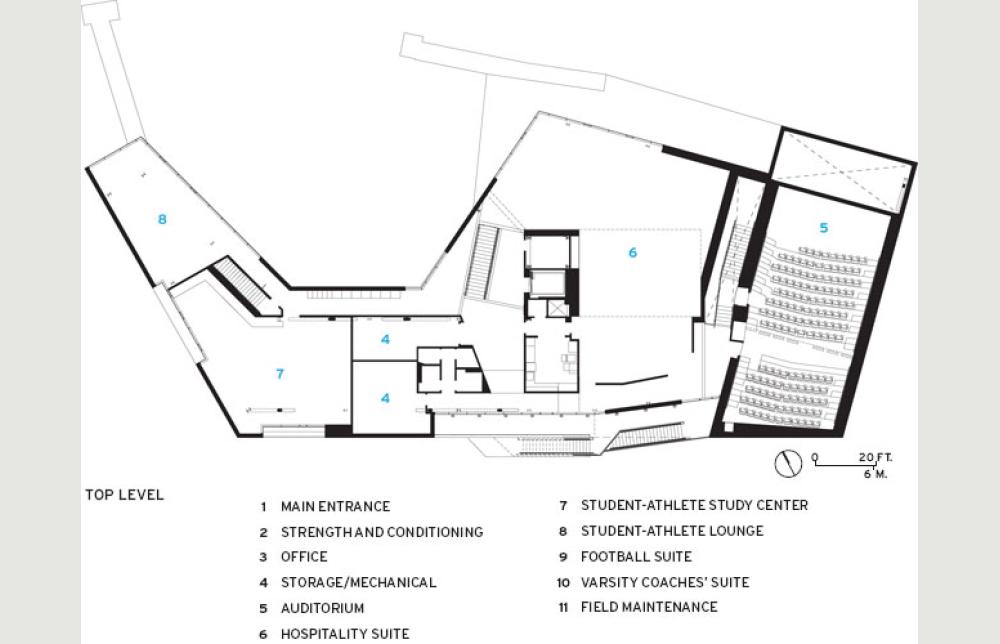 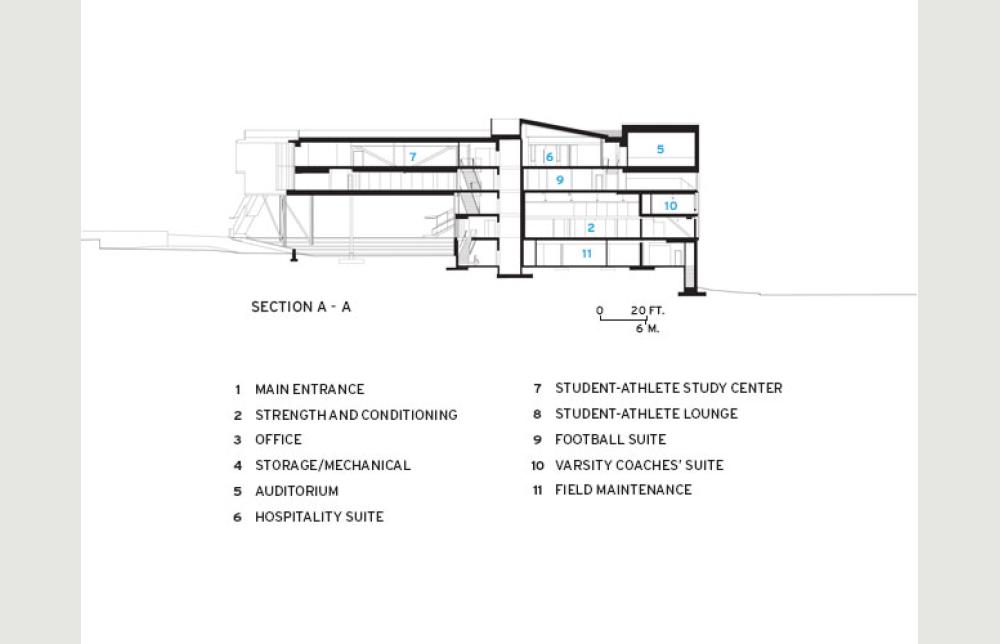 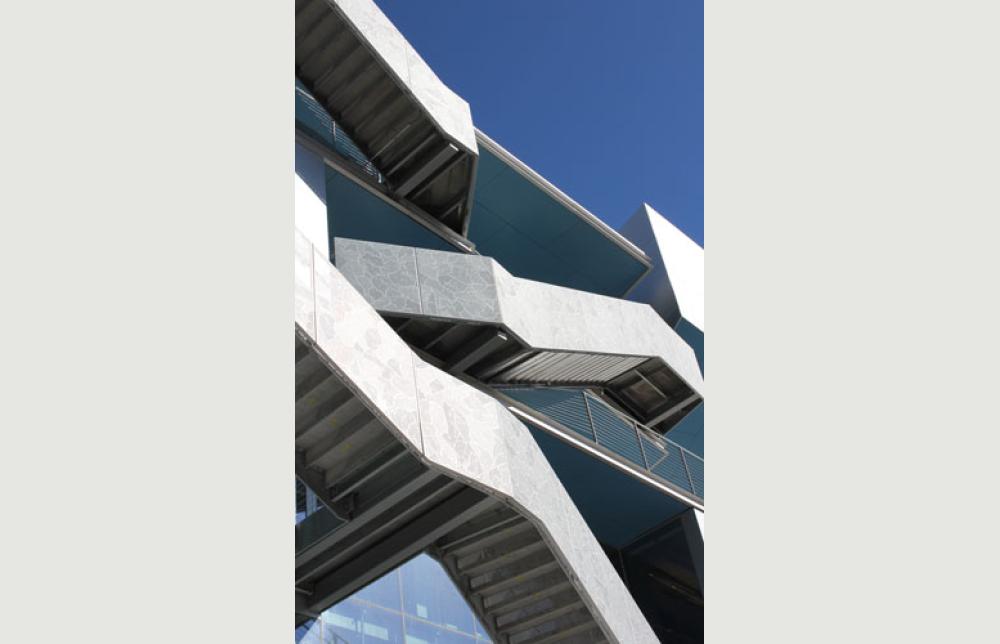 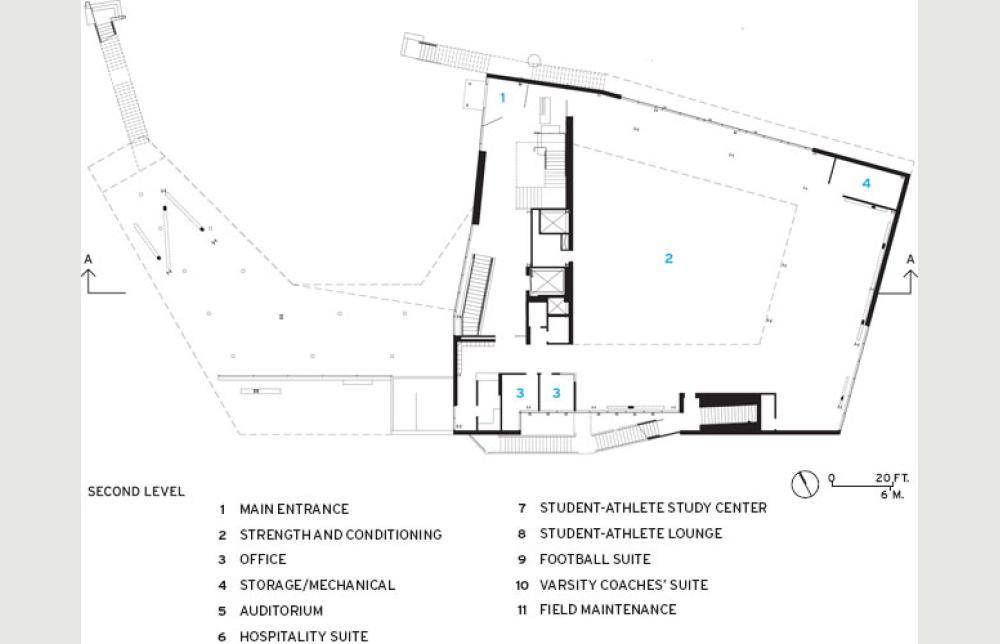 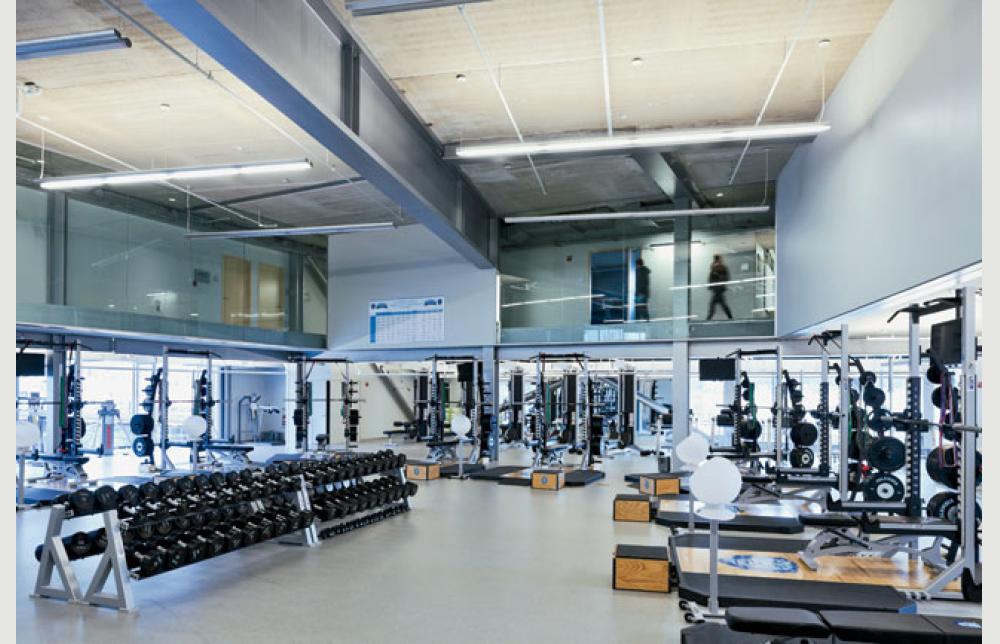 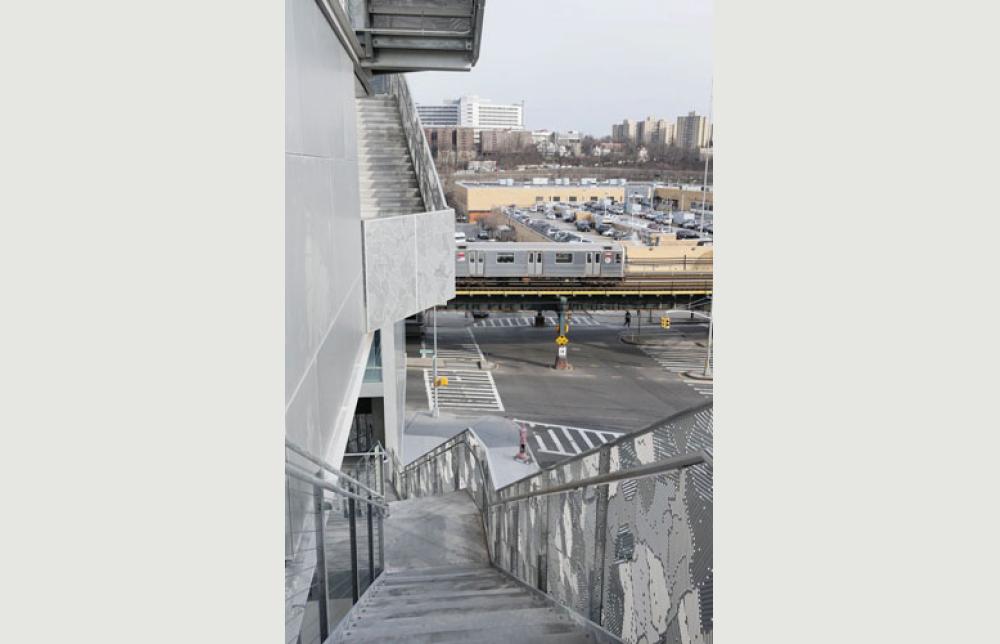 Columbia University Athletics has a new 48,000-square-foot sports center designed by Steven Holl Architects for athletes and their coaches. Holl, who has taught architecture at Columbia since 1981 but never previously built for the university, and his partner, Chris McVoy, a Columbia graduate, designed the $30 million building as a series of gangly forms that rise from the sloping site like a scissor lift. In elevating the east side of the building on spindly legs, the architects have created a gateway to the larger complex, offering views and access. And the building’s bulky forms respond to the erector-set-like Broadway Bridge linking Manhattan to the Bronx (across the Spuyten Duyvil Creek); to the elevated subway tracks; and to other pieces of the city’s rugged infrastructure, which has fascinated Holl since he arrived in New York in the 1970s. It’s like “a train that jumped the tracks,” McVoy says of the building. Much of that train is clad in sanded aluminum, mimicking the industrial facilities to the east. The rest is glass, which reflects the brick prewar apartments to the south. The Campbell center is also an expression, says McVoy, of the diagrams that football coaches draw, with the zigzag stairs hung off the front facade, and their laser-cut aluminum balustrades, suggesting a particularly tricky play. In addition to these elements, the architects created terraces and nooks to extend the building out to both the fields and the surrounding neighborhood. Inside, a strength and conditioning area ringed by mezzanine-level offices is a focal point. Above are a hospitality suite for visiting alumni, a student lounge, and a study room, as well as a lecture hall with seats big enough for the burliest football players (“There was only one company that makes them this size,” says McVoy). Muscular, exposed structural elements and utilitarian finishes throughout the interiors communicate the building’s role as the Baker complex’s “back of house,” while ample daylighting and framed views animate the rooms, which feel like capsules suspended over the playing fields and the rough edges of the borough’s periphery. And what of views to the building? For the residents of Inwood, a stolid middle-class neighborhood, the industrial aesthetic may take a little getting used to, as will the building’s ungainly form. Nonetheless, the facility demonstrates an awareness of context and community. Nearby, the school will soon unveil its James Corner Field Operations–designed Boathouse Marsh, a waterfront park open to the public. Campbell will never offer that kind of community access. But with its jaunty stature and its vague suggestion of open arms, it is about as welcoming as a field house can be. Holl and Columbia, while meeting the needs of varsity athletes, have given an oft-overlooked building type, as well as an oft-overlooked corner of New York City, an architectural win.