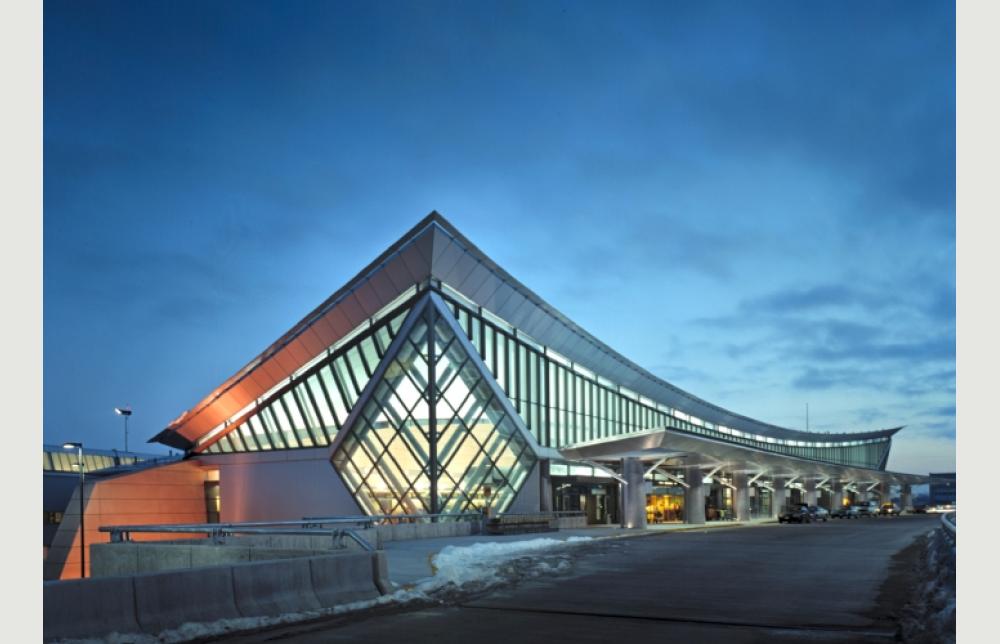 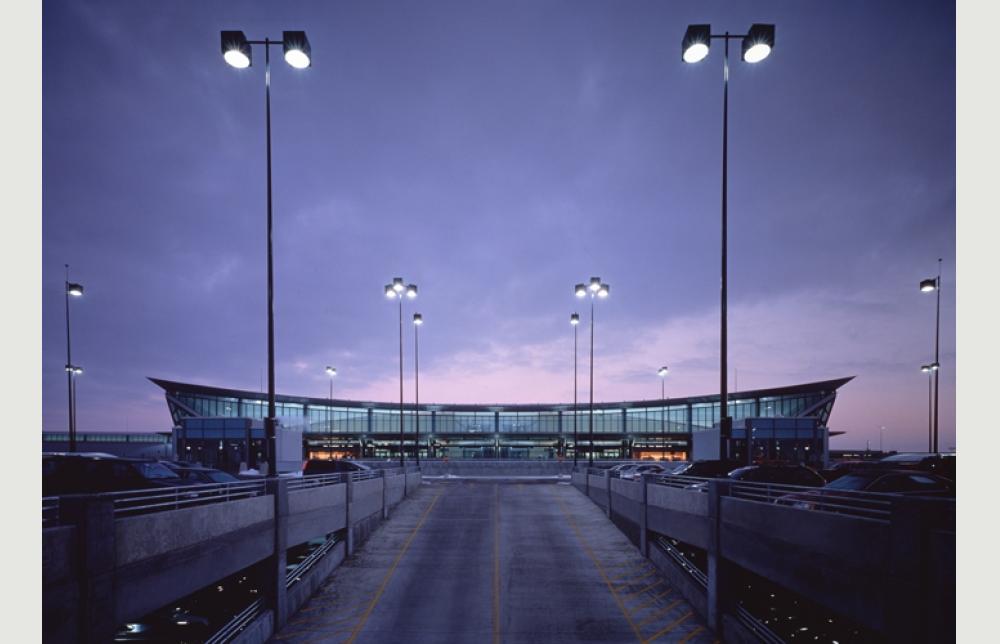 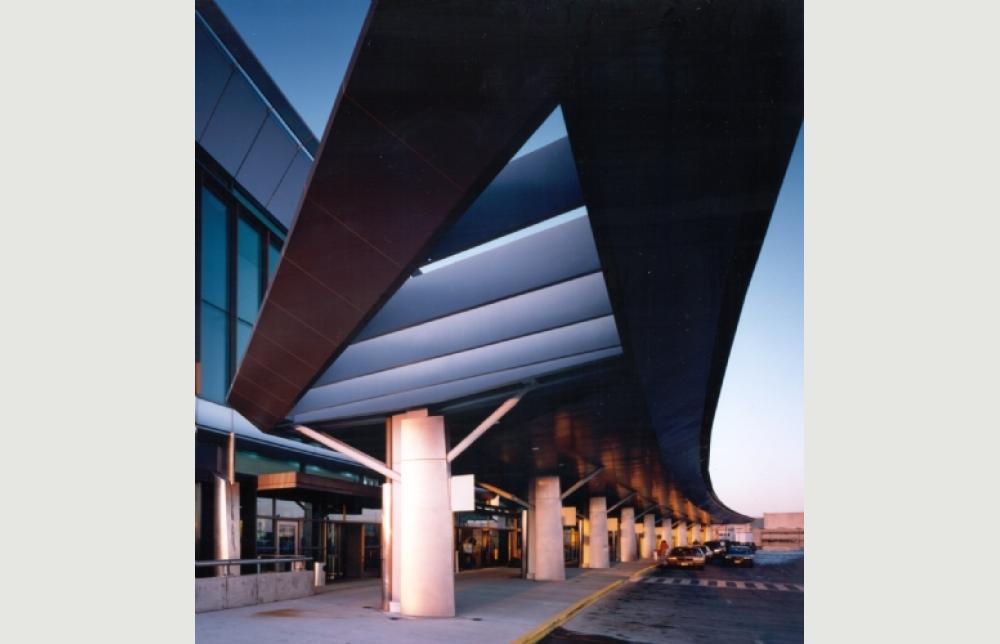 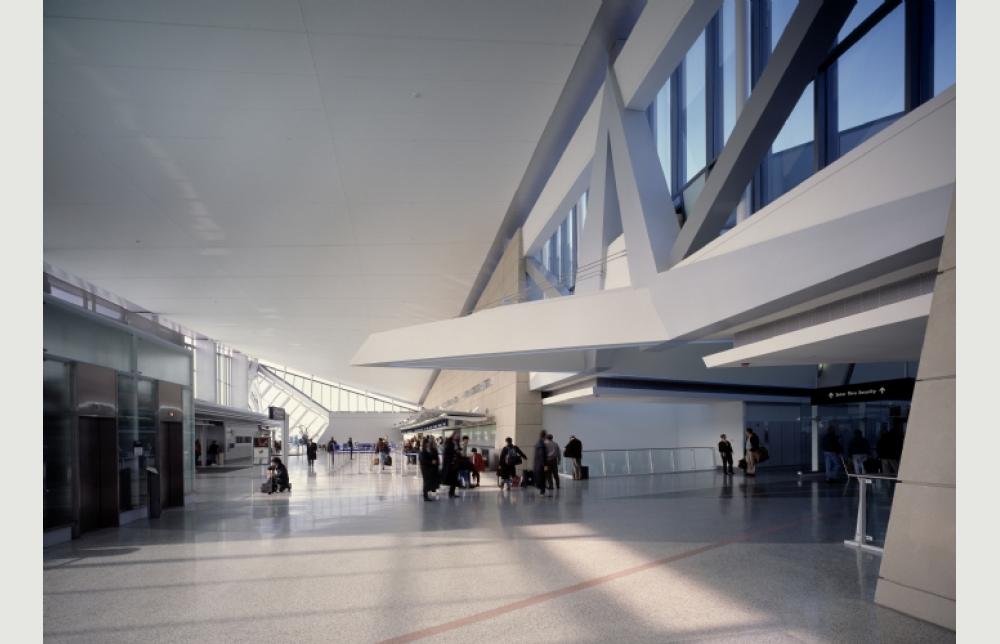 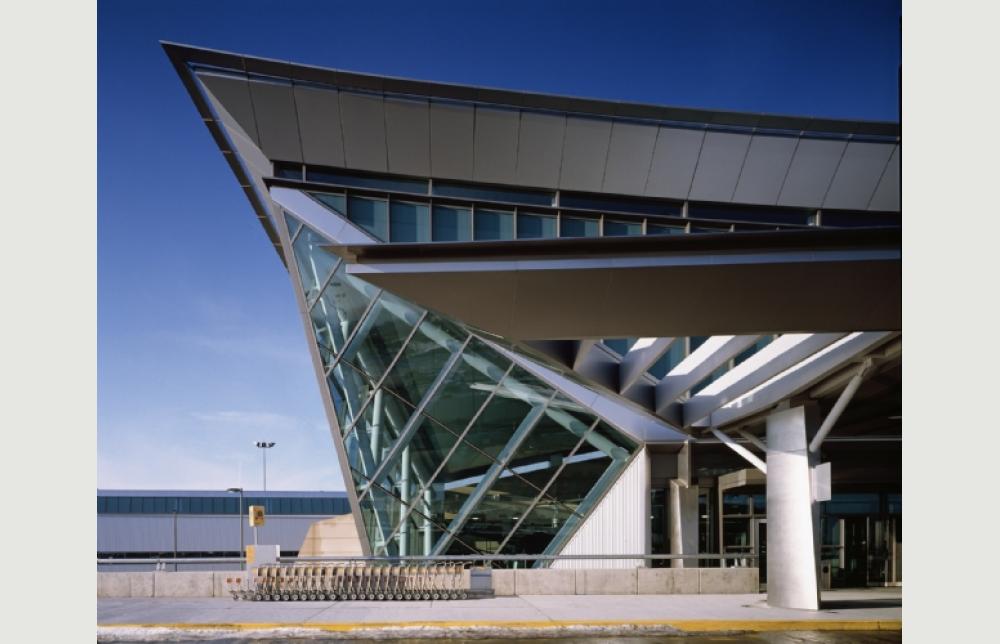 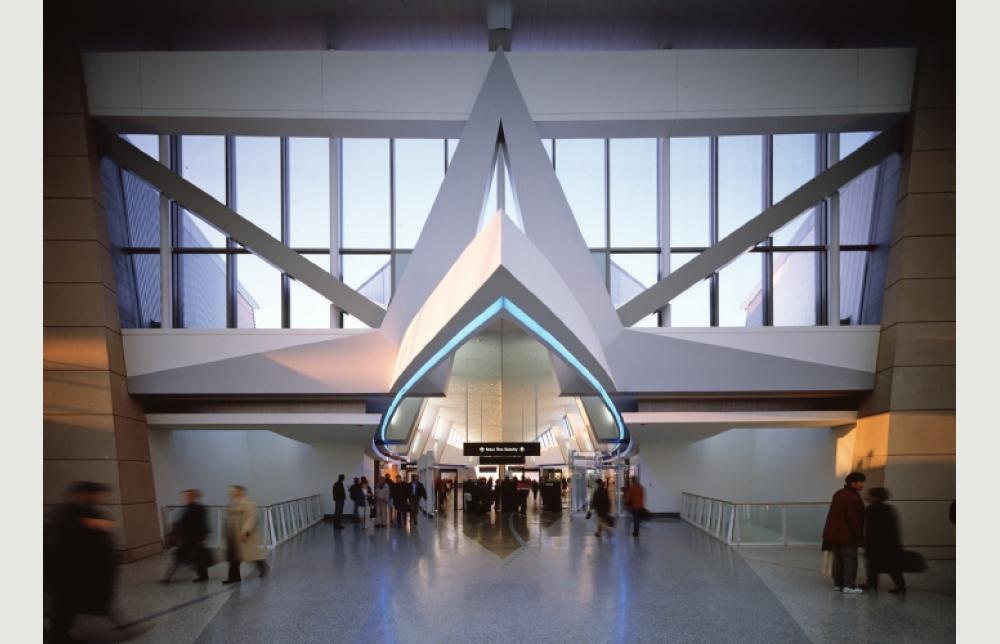 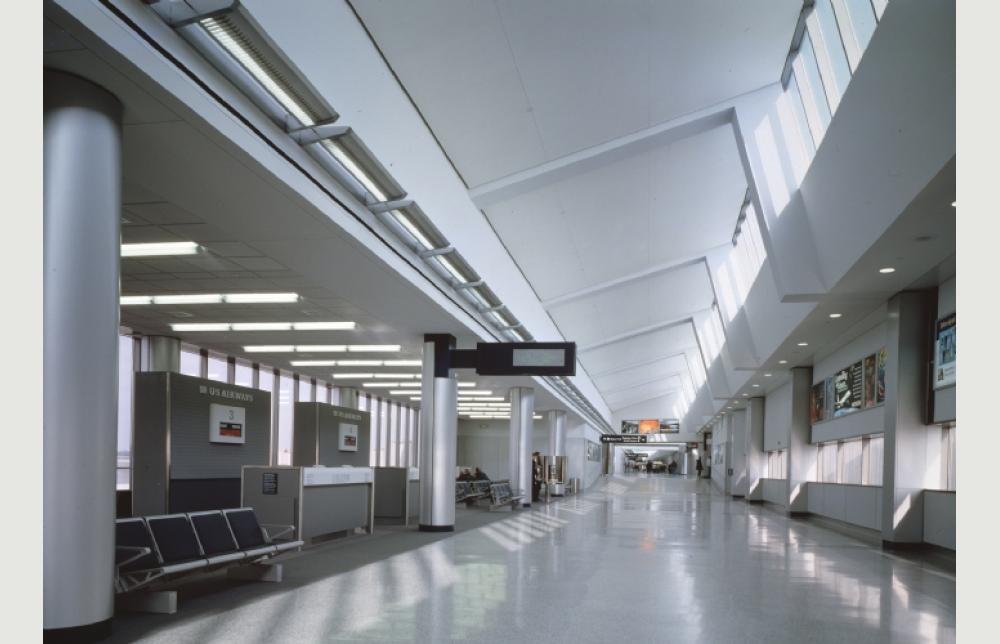 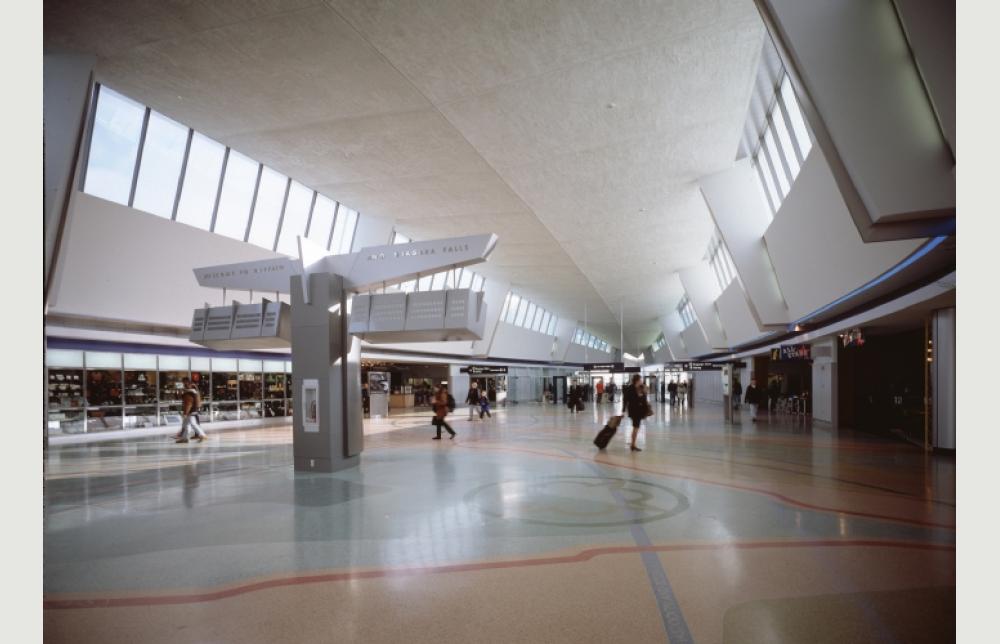 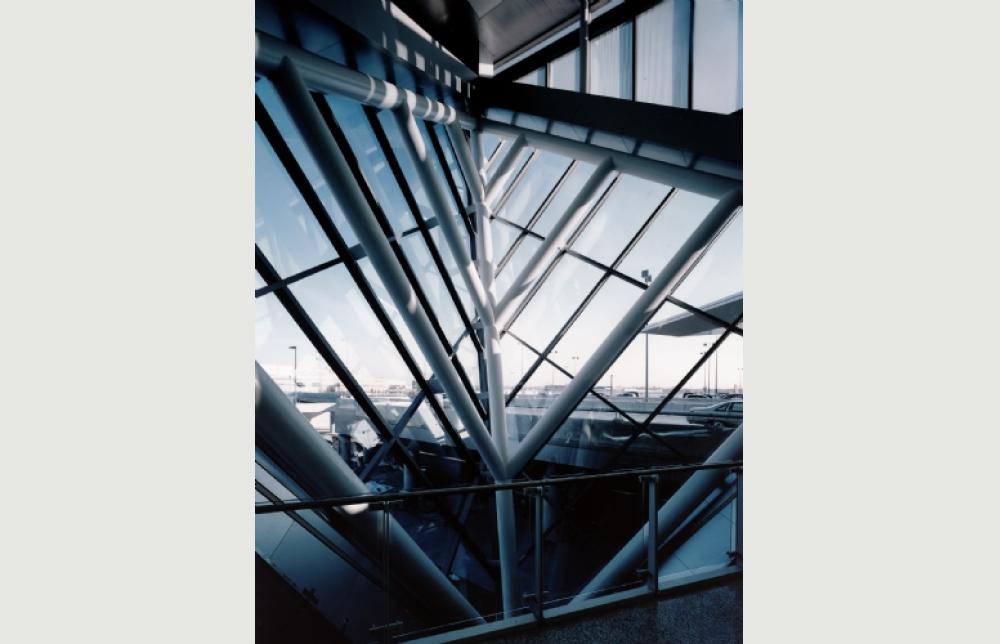 As the main air transport gateway to the Niagara Falls region, the Buffalo Niagara International Airport serves the second-largest metropolitan area in New York State. The facility unites the represented airlines in one efficient structure, replacing two existing terminals. The scheme consists of three major components arranged around a tear-shaped road: an arrivals-departures hall, a concessions link, and a 15-gate concourse parallel with the east-west runway.

Recalling familiar images of air travel and aviation technology, the airport design attempts to represent the ground-air relationship fundamental to the sensation of flight. Consistent with architectural themes first introduced in the design of modern airport structures in the 1960s, the aesthetic employed in the design of the three-part structure conveys this relationship in essential dualities of heavy versus light, static versus dynamic, solid versus void.

The design employs gently curving forms in both plan and section to reflect the tension between the statics of structure and the excitement of flight. With its ends sloping to its center, the arching metal roof of the great hall appears as if posed for flight. The terminal’s changing massing and sectional characteristics reflect the process of spatial compression and expansion inherent to jet travel: distance contracts, boundaries of experience extend, time constantly shifts. The design explores this experience of movement from the soaring ticketing hall to the compressed fuselage of an aircraft.

The palette for the new terminal is a synthesis of aircraft technology and the local environment. The terminal is grounded in a granite base, and anchored to the runway by an arching pre-cast concrete wall which slices through the main ticketing hall, recalling the limestone outcroppings native to the Niagara district. The curvilinear roof forms are clad in stainless steel, the wall systems in a corrugated metallic silver panel and energy-efficient glazing.

The arrivals-departures hall establishes the architectural vocabulary for the entire facility as the fullest expression of the ground-air dialogue. Two parallel walls form the north-south boundaries of this room. The north wall is a massive, gently curving concrete arch that grounds the entire structure to the runway. In contrast, the south wall is primarily constructed of glass, its form not unlike an airborne wing. These two planes are connected by straight beam segments, generating spatial volume and bringing equilibrium to the two parts.

On the departures level is the main ticketing hall and the security checkpoint, from which passengers gain access to the concessions link and the concourse beyond. On the arrivals level are all the airline operations, baggage handling and baggage claim areas. Outside the terminal is a corresponding landscape and parking program enclosed within the tear-shaped rotary.

The landscaping was also designed to be visually continuous with the built forms. Just outside the arrivals building, a crescent-shaped berm hosts a water feature that evokes the imagery of nearby Niagara Falls. Directly opposite the terminal, within the teardrop, are the two level garage and surface parking lots for employees and passenger long term parking. The roadways, surface lots and parking garage are connected by a series of earth berms and rows of trees.