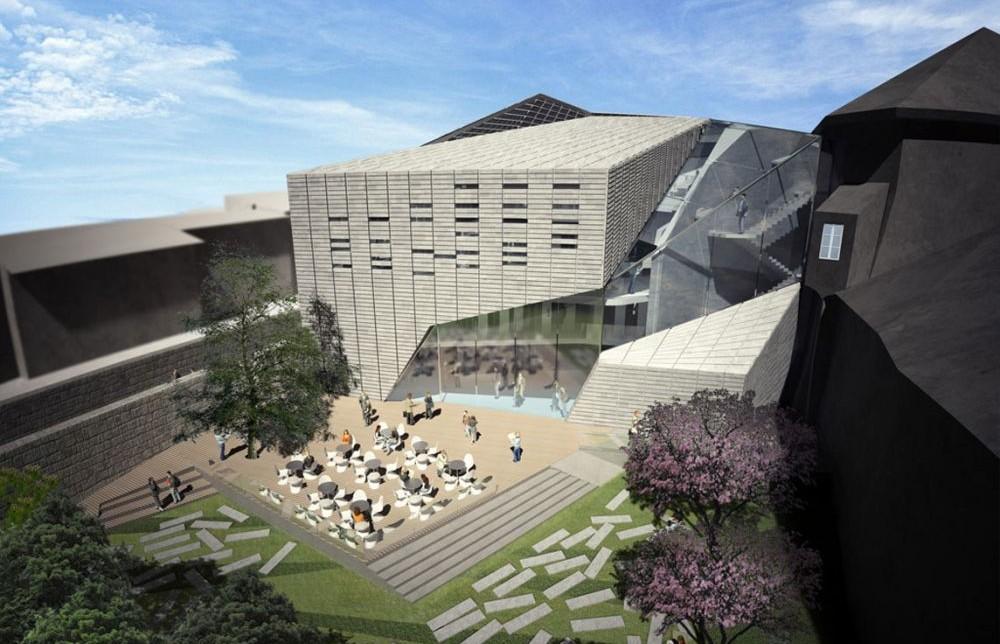 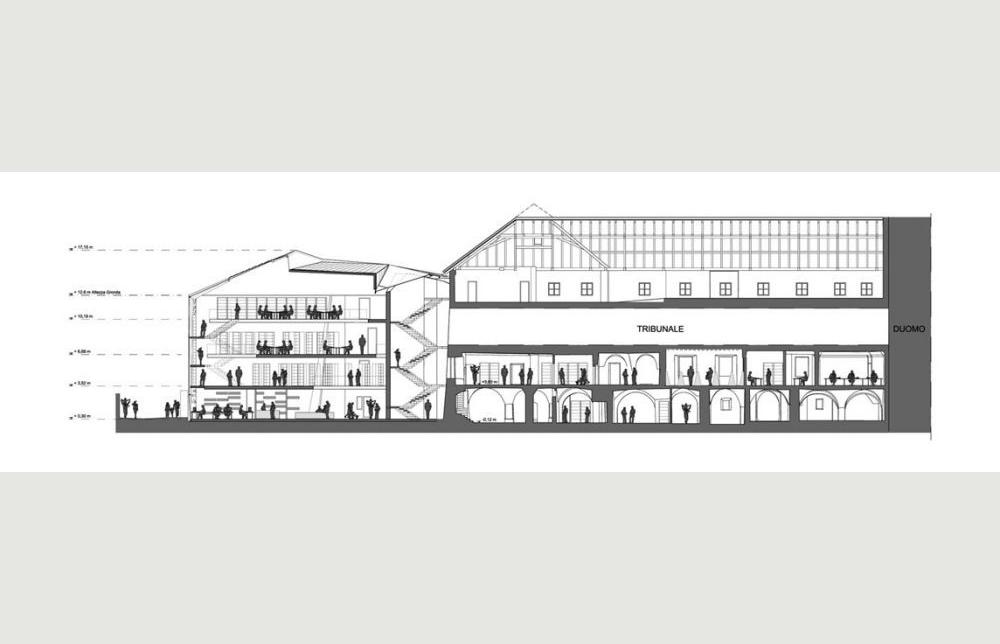 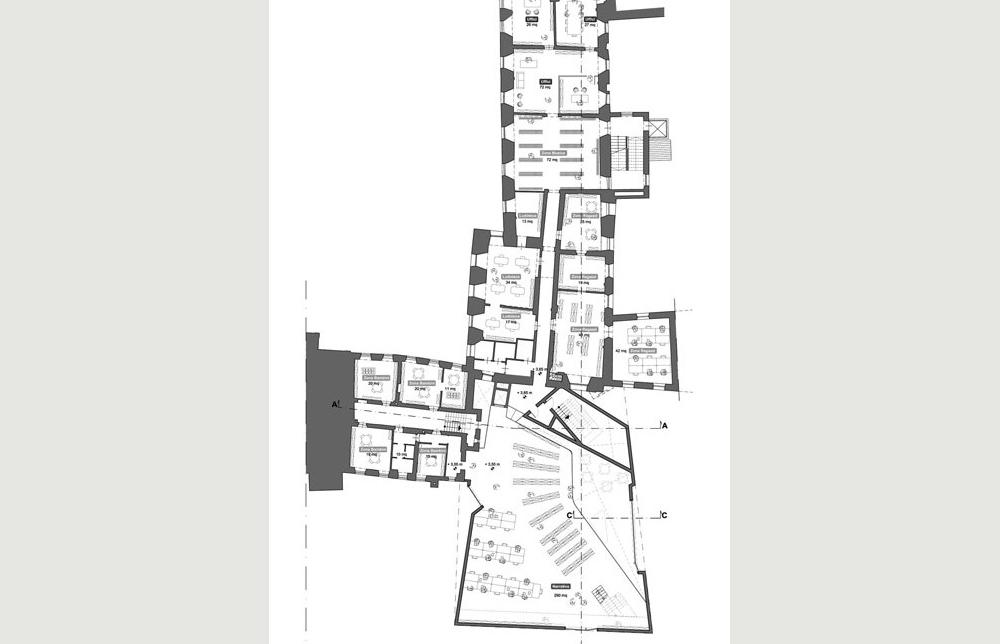 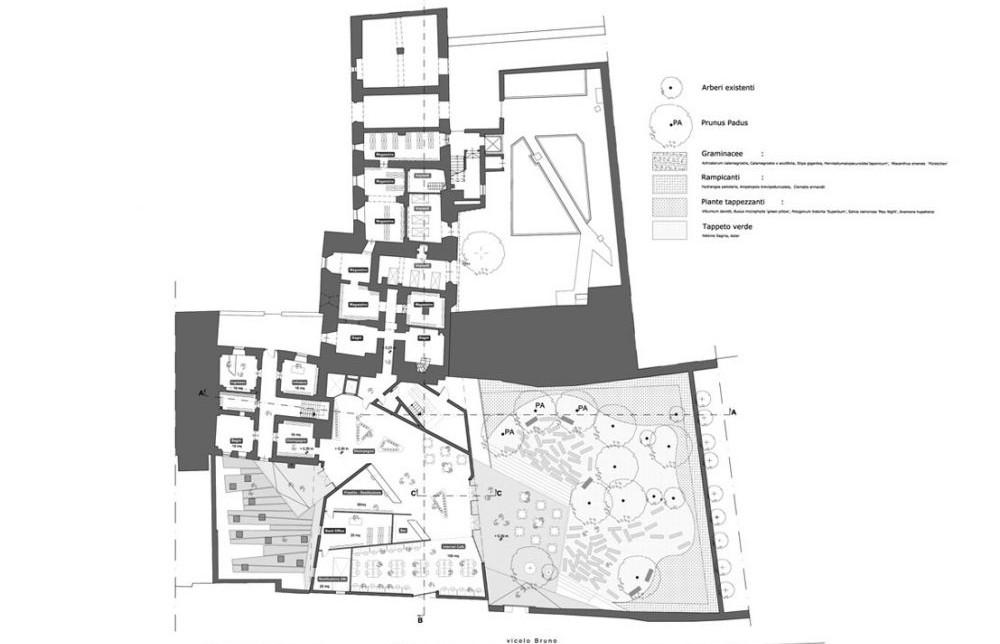 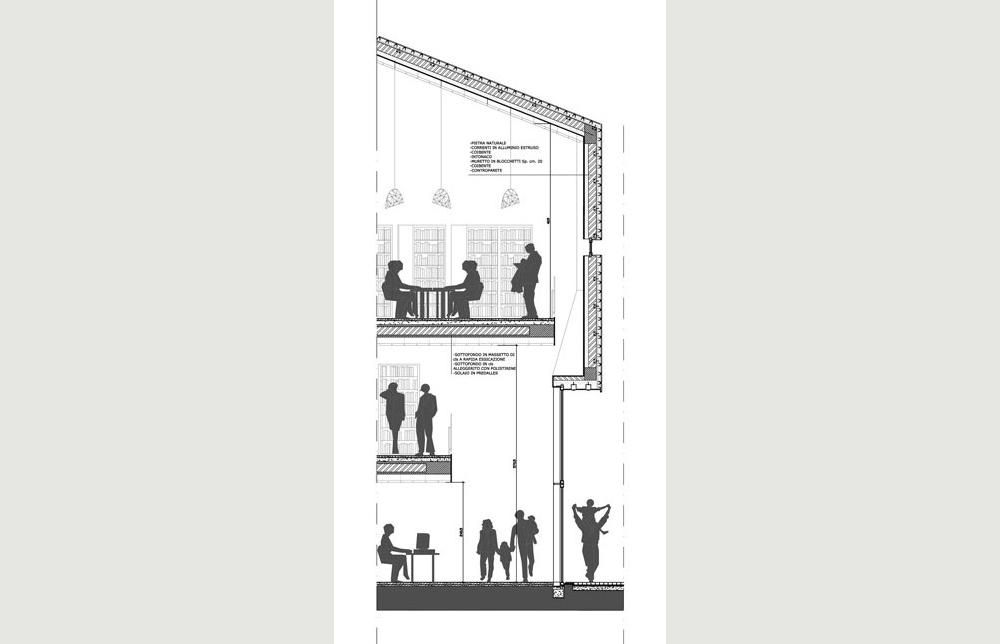 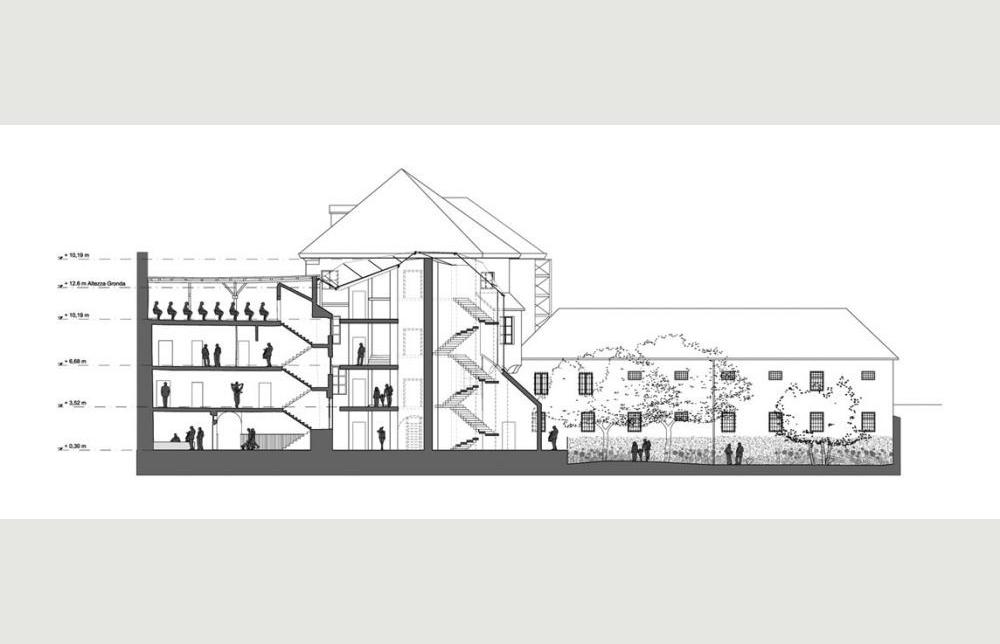 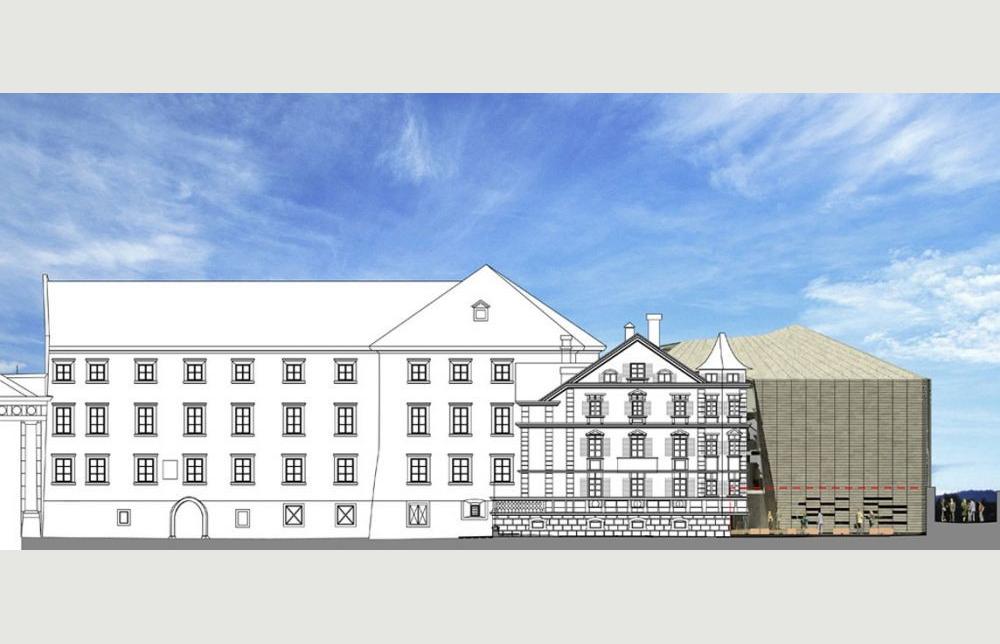 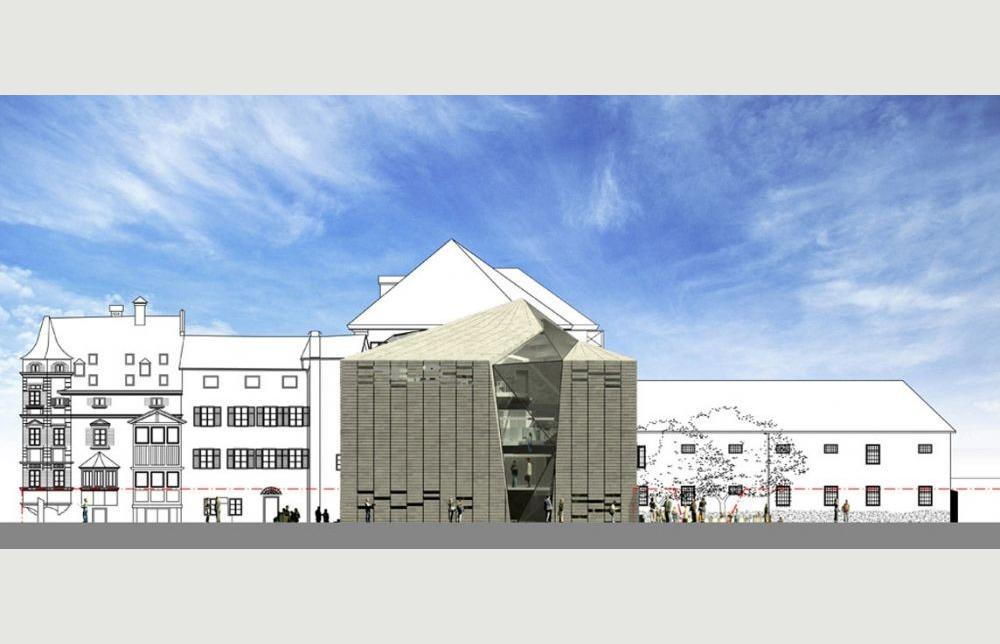 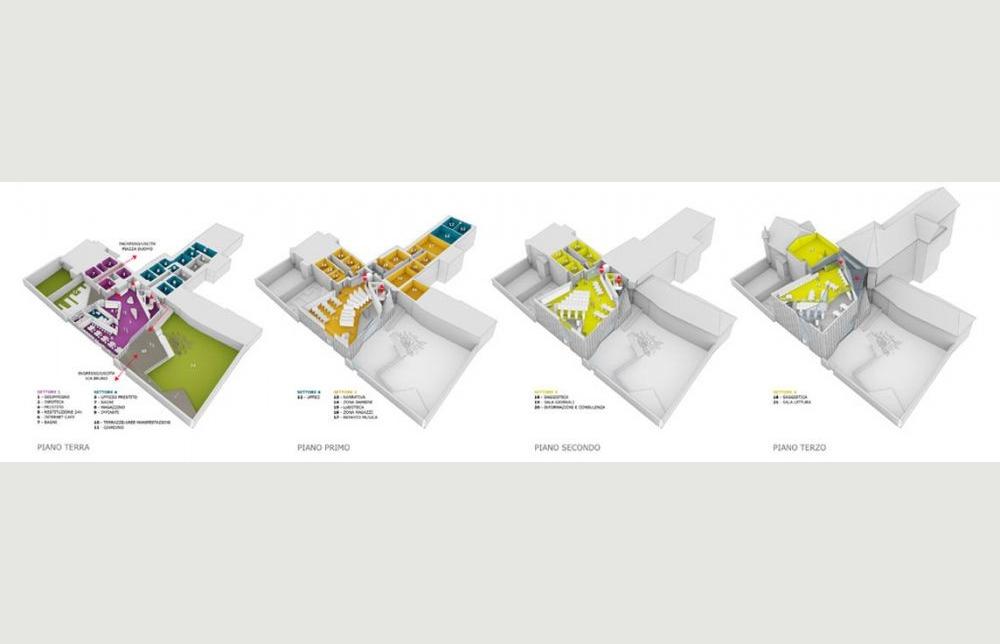 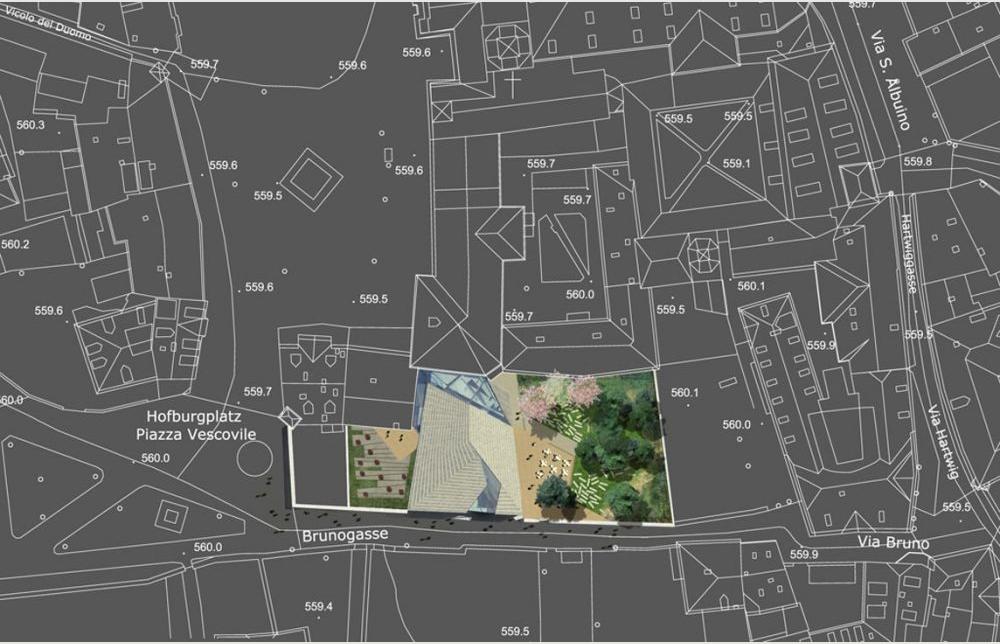 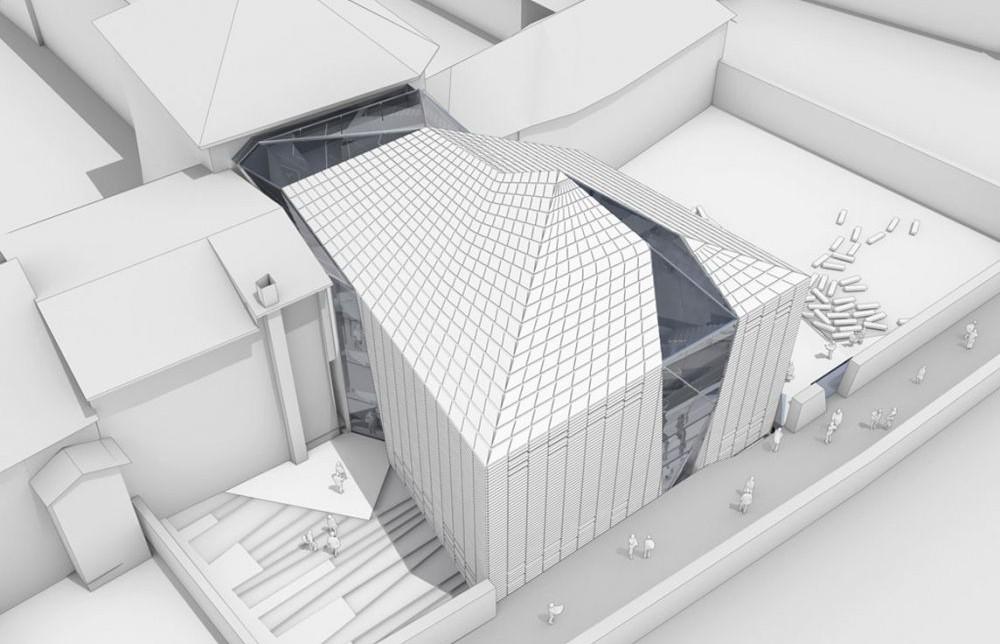 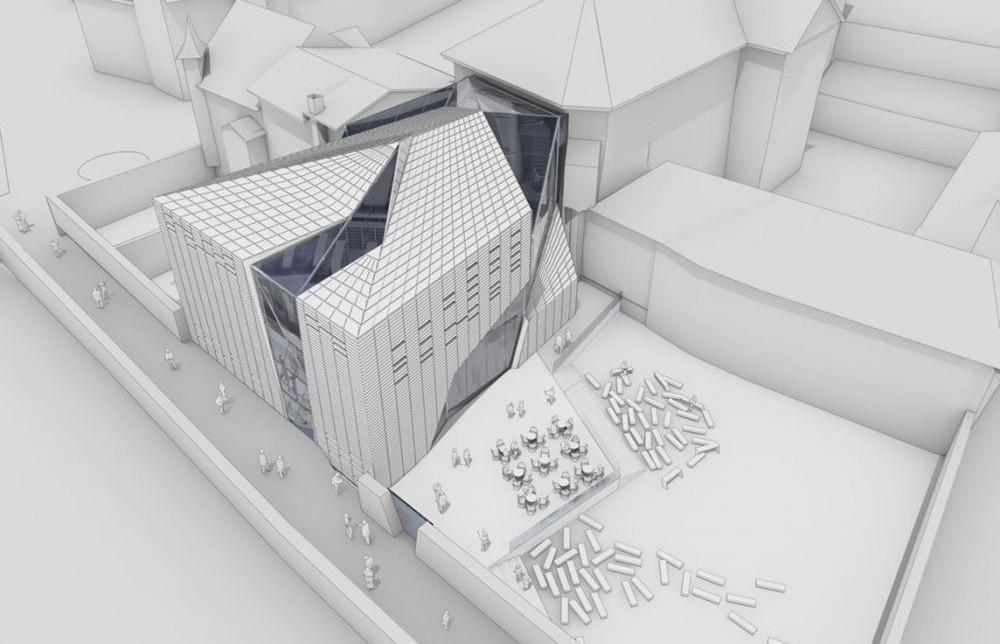 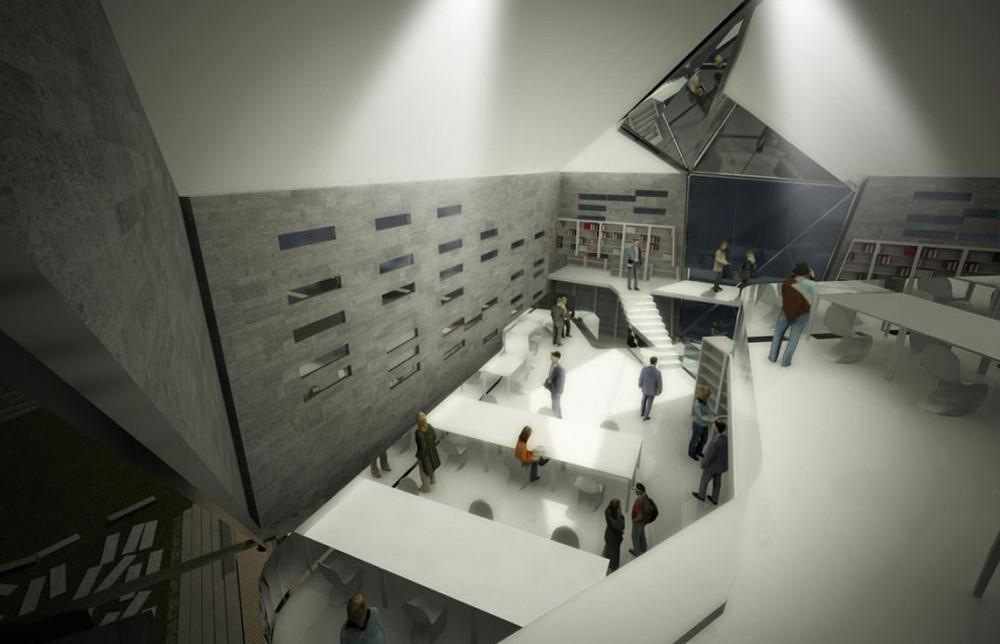 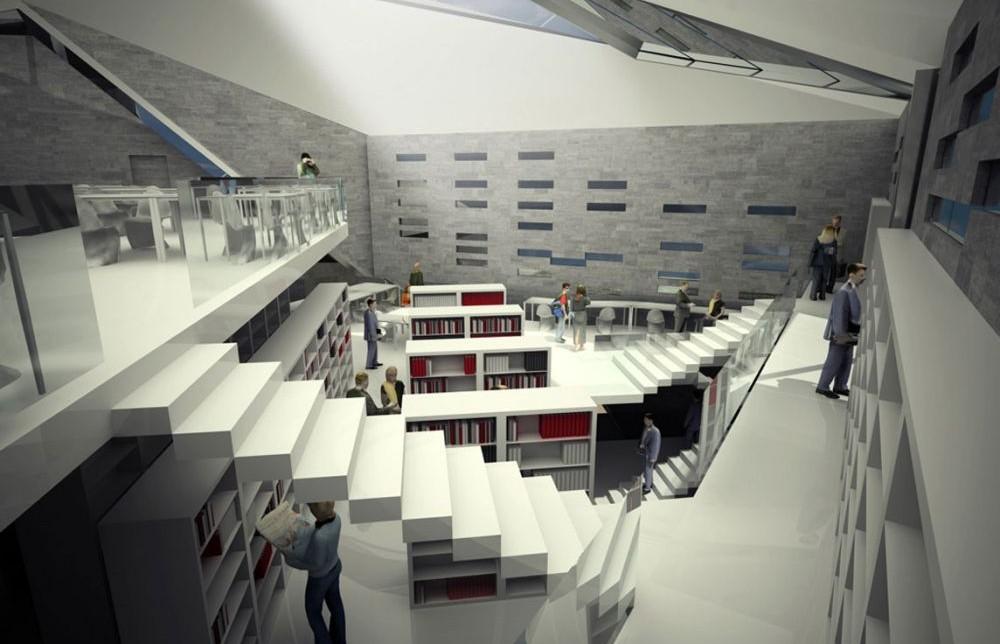 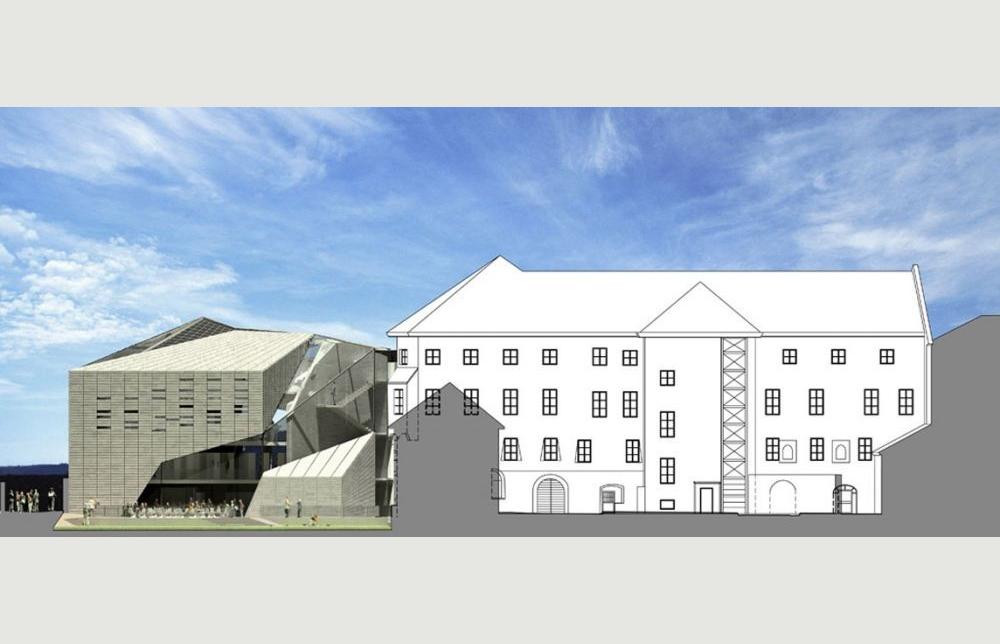 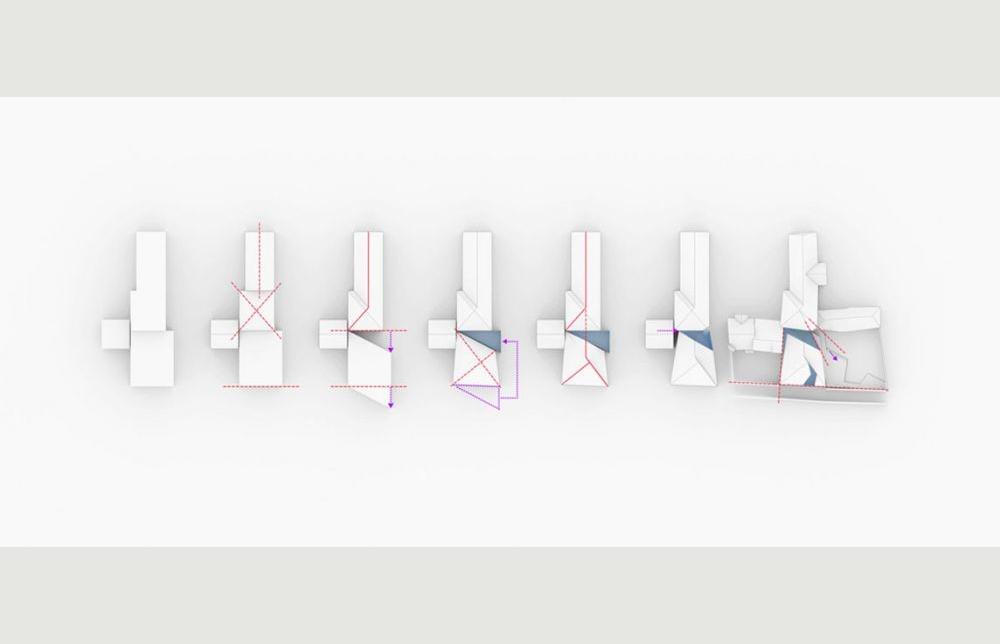 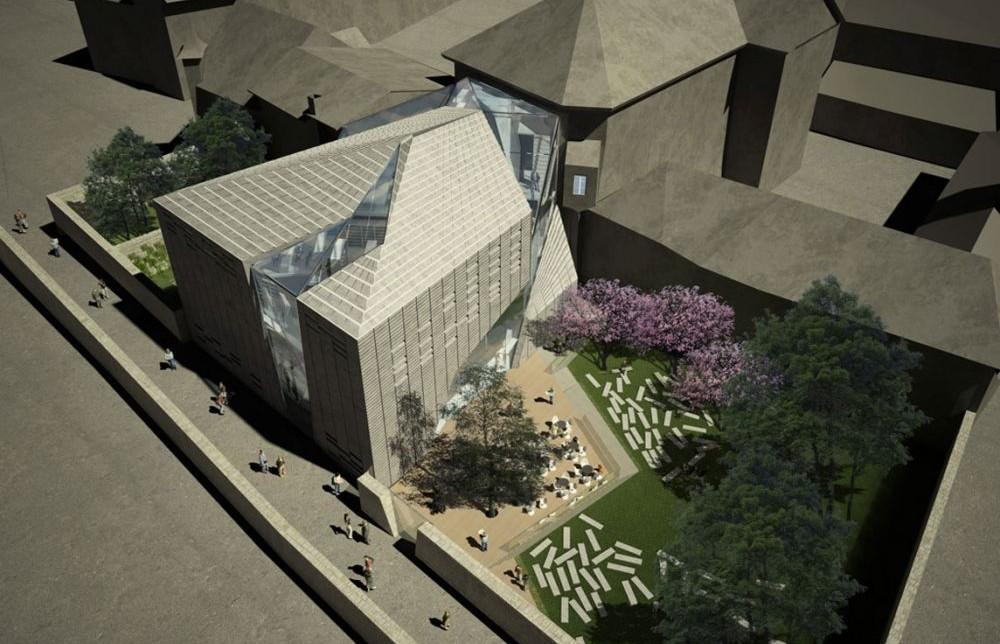 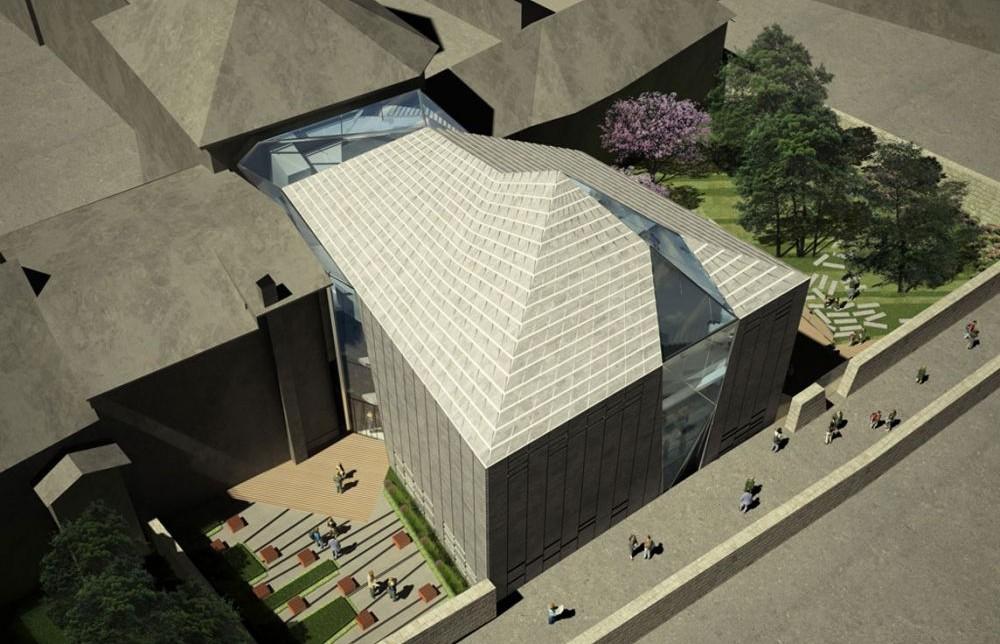 Introduction
The Aquilialberg project for the Public Library of Bressanone has the aim to become a new gathering location for the population. Following this line, the project is designed to assure wide spaces for socialization, both interior and exterior, to accommodate public manifestations and cultural encounters. It is a place to spread knowledge, in which a citizen could feel themselves at ease and spend spare time constructively. Interior volumes are designed on the basis of the educational purpose of a Library. Reading rooms with double height are connected to each other at different levels. In these spaces of interconnection, natural light filtrates smoothly from skylights and narrow windows cut in the external walls. On the other hand, areas for socialization and gathering are overflowed by the light coming from full high windows.

Architectonic concept: light and matter to leave a trace respecting the tradition.
A new volume is added to respect totally the existing context, leaving at the same time a trace of the contemporary attitude of the new building. A chronological right approach is used, reminding that the site is not the consequence of just one development phase but the result of all the reconstruction projects that have happened over time. The proposal for the new building combines the traditional roofs of Bressanone with new contemporary architectonic lines, to leave a sign of the temporary collocation of the project. The Inspiration is substantially a sculptural presence cut by the natural light of Alps. Light and matter became very important for the development of the volume and its spaces. Glass windows are the flow that wraps the new building, curving it as a river between rocks. A hinge of sculptural light that separates the existing building from the new library.

The new volume geometry and its roof slopes for a well-balanced insertion in the city context.
A deep design study is conducted for the new volume; the starting point was the relation with the existing neighbours volumes and their geometries. Special attention is given to the orientation of the roofs slopes of the closest buildings, with the purpose to match, in the most elegant way, the new project with the context of the city. The composition language, developed in the design of the new volume, came from the push of the neighbours roof slopes through the competition site. A void is generated and it worked as a hinge to match the existing volumes of the new Library building. The Hinge-Volume material is glass, chosen to respect the relation between historical past of the existing and the new presence. The hinge became a transparent volume and it will be, at functional level, the place for the vertical connections between the two buildings and also the different levels of the library, being at the same time a fire escape stair. It will replace the old staircase that will be removed.
In total respect between past and present, an imaginary optical cone grows from the Erker cutting the volume, amplifying the presence of the Erker itself and its historical point of view on Bressanone. Similarly, a transparent cut is opened on the south elevation as evidence of the present. The volume of the building assumes a very strong appearance because of the use of the local trentina stone on the external skin of the library.

Sensitive perception of the project from Dome Square – Powerful perception of the project from Bruno Street
The faade visible form the entrance in the Dome square of Bressanone is very discreet so as not to disturb the equilibrium of the plaza. The volume is solid, clean and elegant, marked by a vertical opening, which is a full high glass window, positioned where the new building touches the existing one. Walking on Bruno street it is possible to see that the building increases the complexity, exiting this piece of street which needs to be re-qualified and distinguished in a more consistent way, considering also its strategic position in the city to Palazzo Vescovile. So, the south faade of the project is crossed by a big window that will characterize the street: with a continuity solution, glass skylights will be connected with the faade window as a waterfall of light, relating the library to the city.

Relation with Existing Buildings.
The new Building is attached to the existing buildings with a glass volume within the escape stair. The transparent hinge volume for a continuity solution goes from the faade to the roof and to the neighbours existing faades. In this way the individuality of buildings is granted, but at the same time they are in relation between each other, emphasizing the distance between past and present, coherently with the introduced assumptions.

Faade
the matter and the light are the two principal elements of the faades and of the interiors as well. The external skin with local stone follows a regular grid, which remember ideally piles of books that are in the interiors. Again ideally, some of these stone books that build the faade, sometimes they disappear in some places where internal functions need more light, so small cuts are created. These blocks of stone are poetically used as stepping stones in the eastern garden: books ideally spread to underline ironically that the library is not only a place of concentration and reflection but also a place to enjoy spare time. A kind of poetical connection between the reading areas of the interiors and the external aggregation places of the garden. The stone increase the solid aspect but it is been chosen in respect to local materials.

The Library
The new library interiors are designed to create an ambient space which could be the most open and united. To achieve this purpose, cuts are created on the floors so to generate double height spaces, so to remember the slopes lines. In this way the generation lines of the roof are the guide to design the interiors spaces. The first floor has a double height in the area close to the entrance from the garden, joining as a filter zone the interior with the exterior. On the south wall there are three mezzanines to connect the first floor of the narrative to the next two levels of the essay-writings. It is a wall that works as a big library visible from all the levels and at the same time it is possible to see the people walking inside from outside. So empty spaces generated by the cuts of the floors and lines of the roof connect the different areas of the library.

Structure and eco-compatibility
The structure of the building is in concrete. Roofs as well are in concrete and masonry, build with pre-tensioned and reinforced concrete self-supporting slabs. These are chosen for optimal technical characteristics, quick to build to build and economical, it is the best solution considering the long spans and the cantilevered floors. External walls are done with concrete blocks where aluminium rail will be hung to attach the local stones. The ventilated faade will work to increase the quality of the ambient interior micro-climate, both in summer and winter time, so to ensure a correct and well balanced energetic functioning of the building. In terms of ecology-compatibility, also the choice of the exterior and interior stone and of the development of the two gardens, which are not considered secondary spaces, is very much coherent. These technical solutions together with the simplicity of the geometric volumes, will guarantee for an economical elasticity for the construction of the widows frames and of the more complex skylights. A balance of the technologies and distributions of the investments is oriented to the realization of a building with a adequate composition and ethically correct, where the structure the light and the matter are never lost.

Gardens
The project of the two gardens is faced in a way that the two gardens could be distinguished typologically: the smallest garden is an ambient more mineral and geometric, the biggest one is more natural and romantic. In the first one, the external connection between the new building and the existing one has a wooden paved zone which connect the two buildings. The passage is inserted into the remaining paving which is tiled with the same stone of the building faade. Between these big stone sheets, joints are filled with grass for water drainage. In the court perimeter grasses essence are planted, which with their colours will create interesting chromatic effects that reminds the warm colour of the corten steel used for the skins of the boxes. These boxes are dots in the garden space and they are used as seating for a break or for reading. On the other hand, the biggest garden, at the east side, respects the organization of the previous garden leaving the existing trees and increase its value adding arboreal and upholstered essences that are very shiny and coloured. The terrace is at the same level of the building and stands on the ground with some pilotis, respecting the natural curvatures of the ground. There will be tables for reading and it could be used for open air exhibitions as well. The terrace wood ends up with a grand stair which brings one to the stepping stones. They will be placed in the ground following a random pattern, at the same time they will represent the pieces of stones cut out from the faade to give space to the light to go inside. They are an invitation for the people to walk around the garden underneath the trees. The new trees that will be planted are cherry trees prunus padus. They will fill the air with light and colour during the period of flowering. Always to add colour to the garden a flowered curtain-wall will be placed on the perimeter walls of the garden adding a new value to them as well. Low vegetation is essentially composed by upholstered essences which grow in the shade and do not require a frequent operations from a gardener, so to decrease the cost for maintenance.