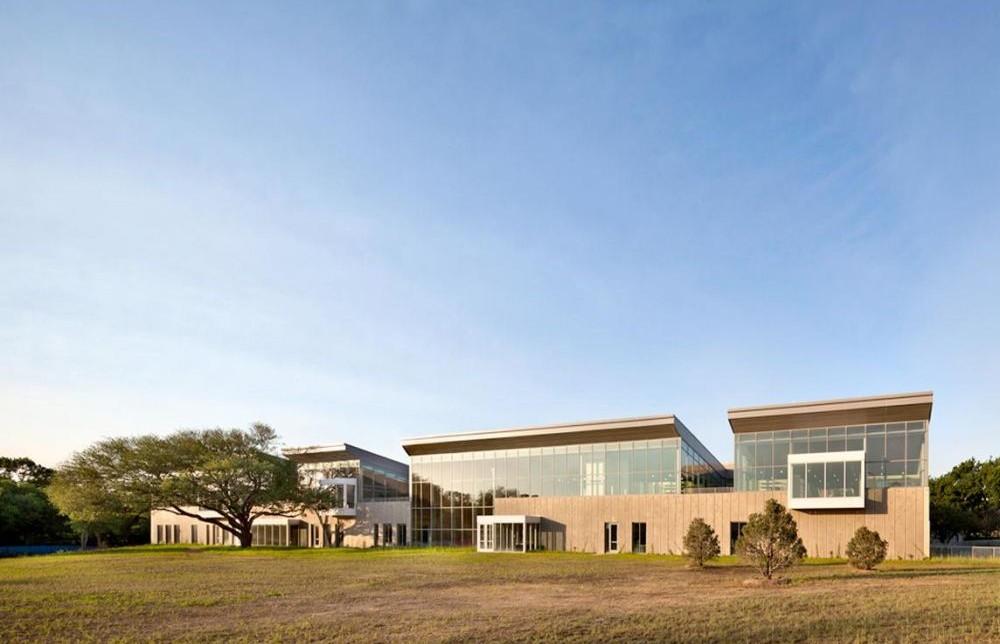 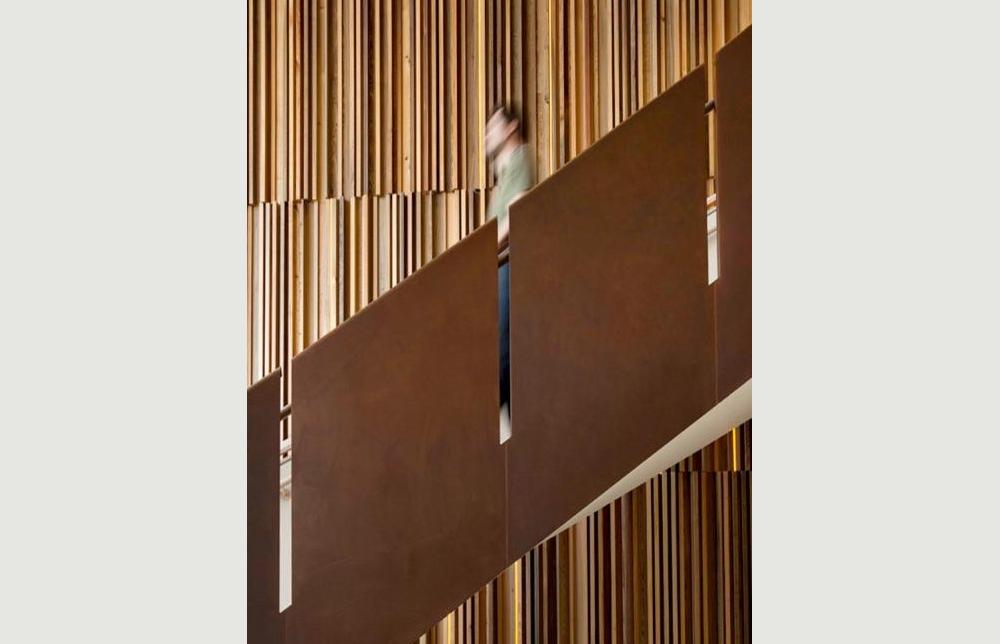 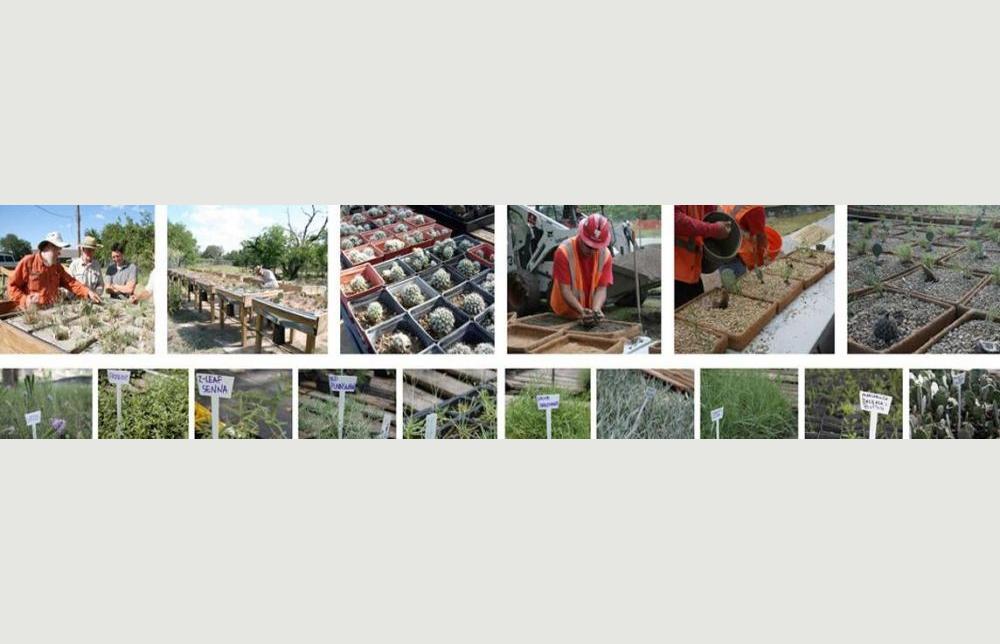 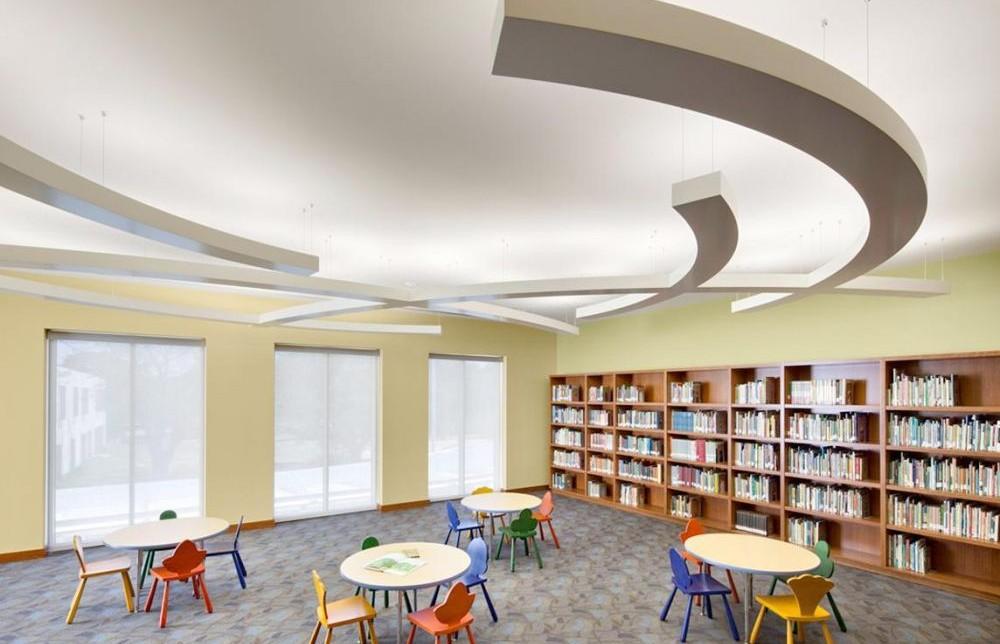 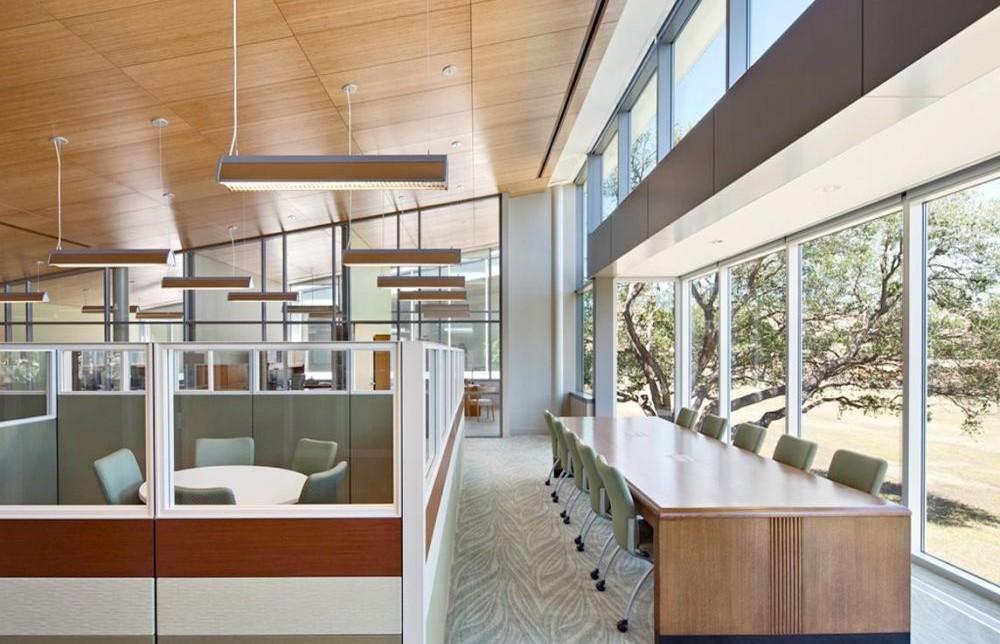 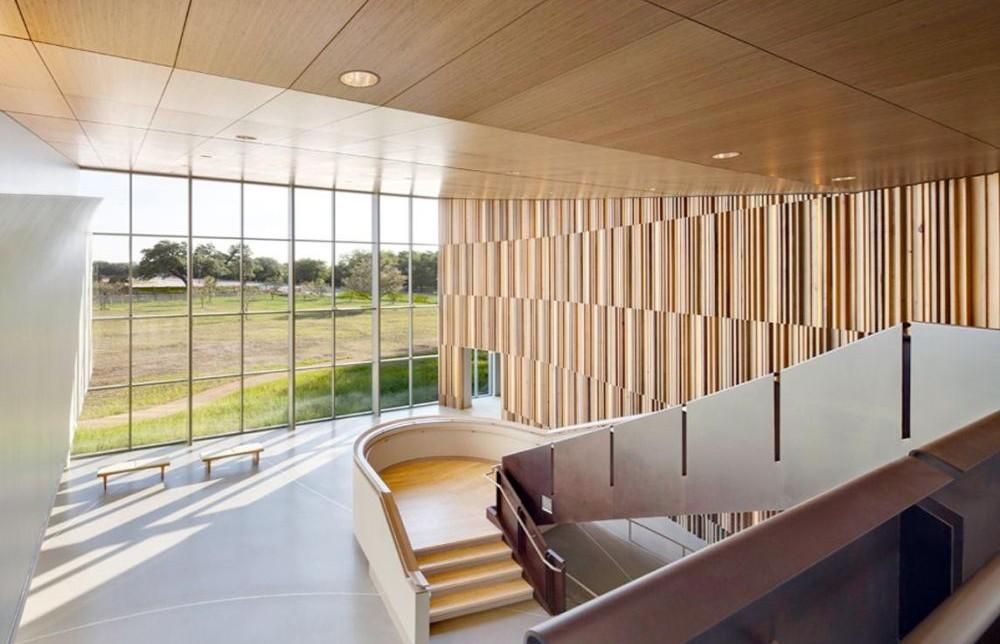 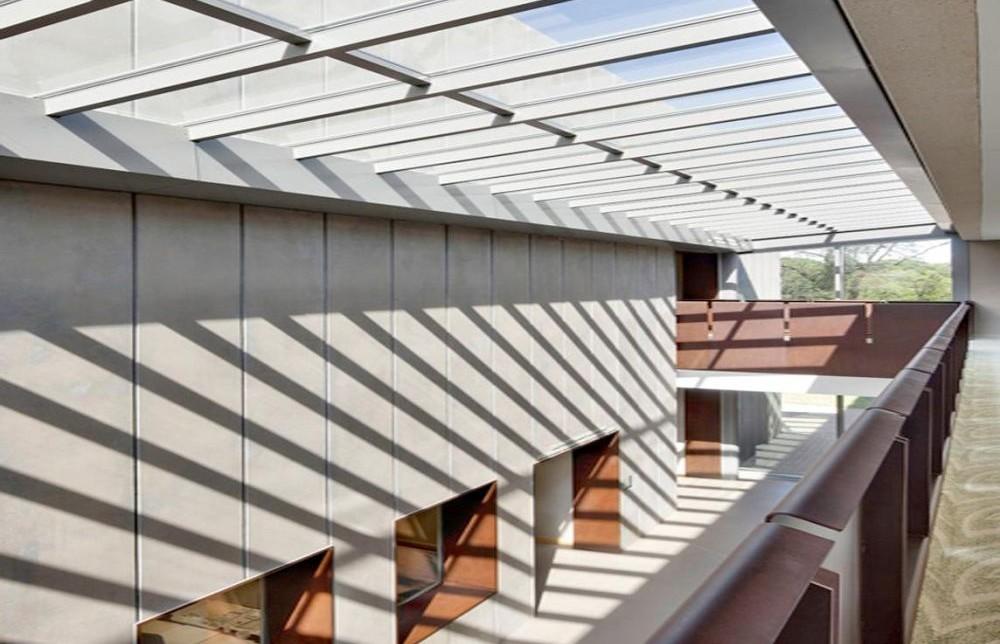 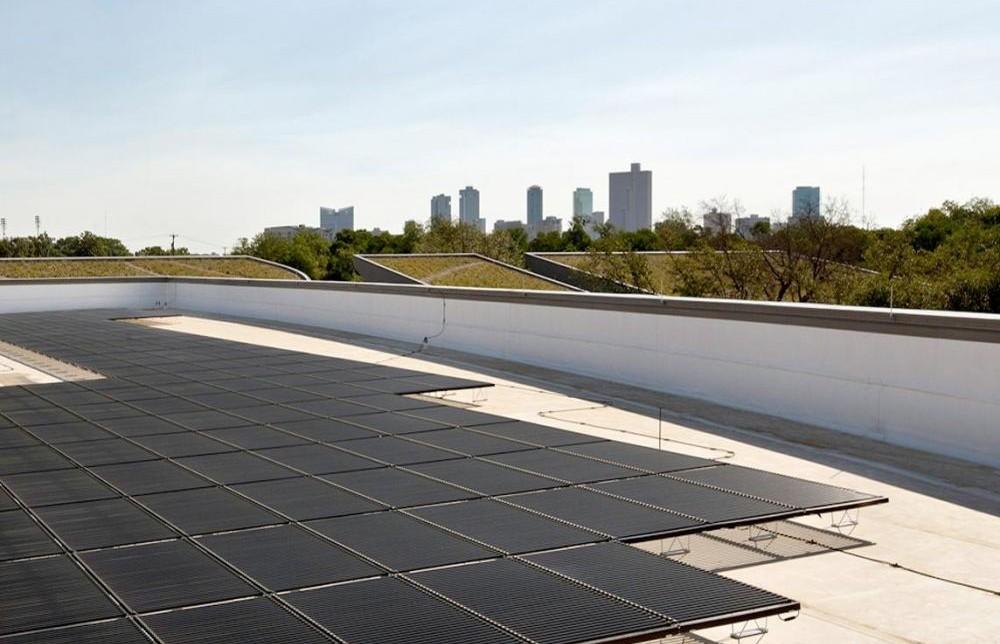 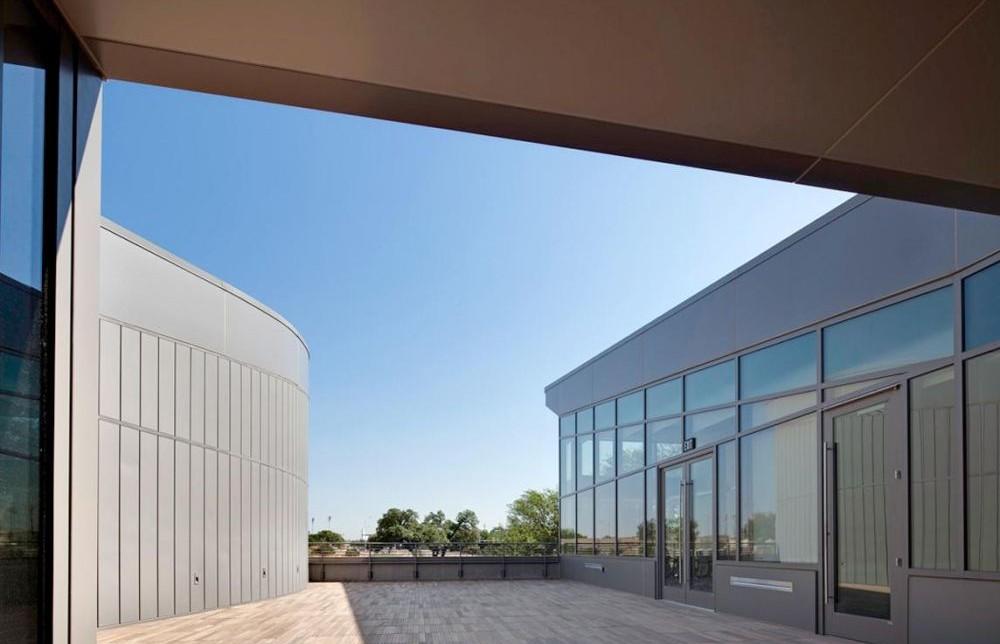 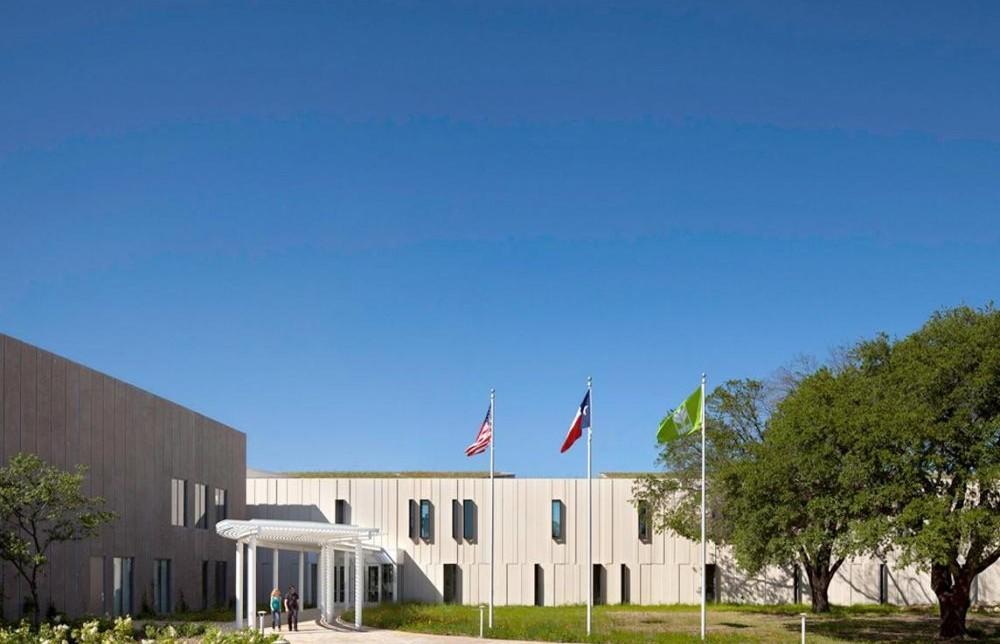 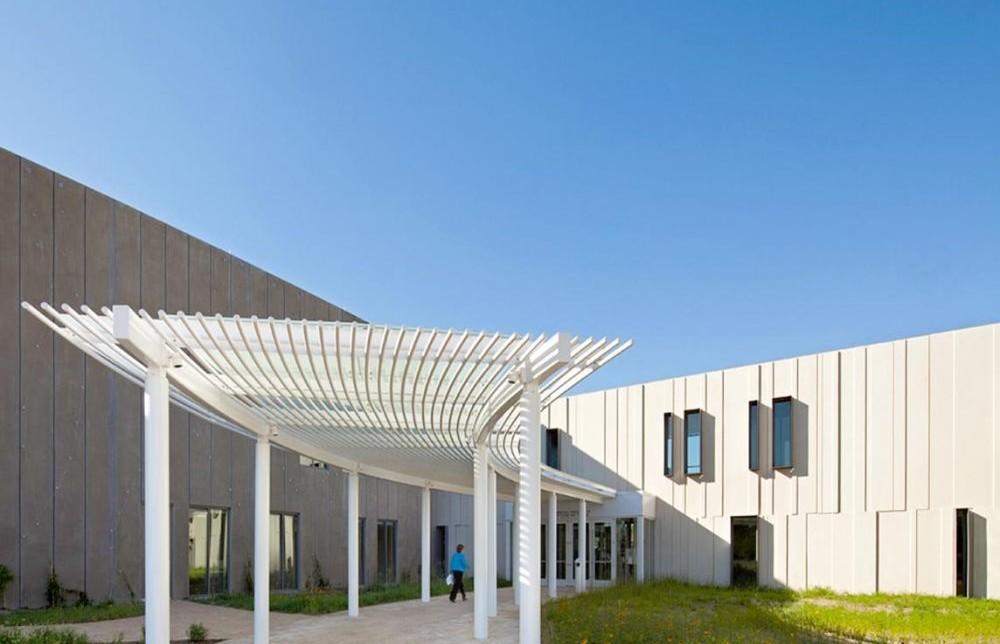 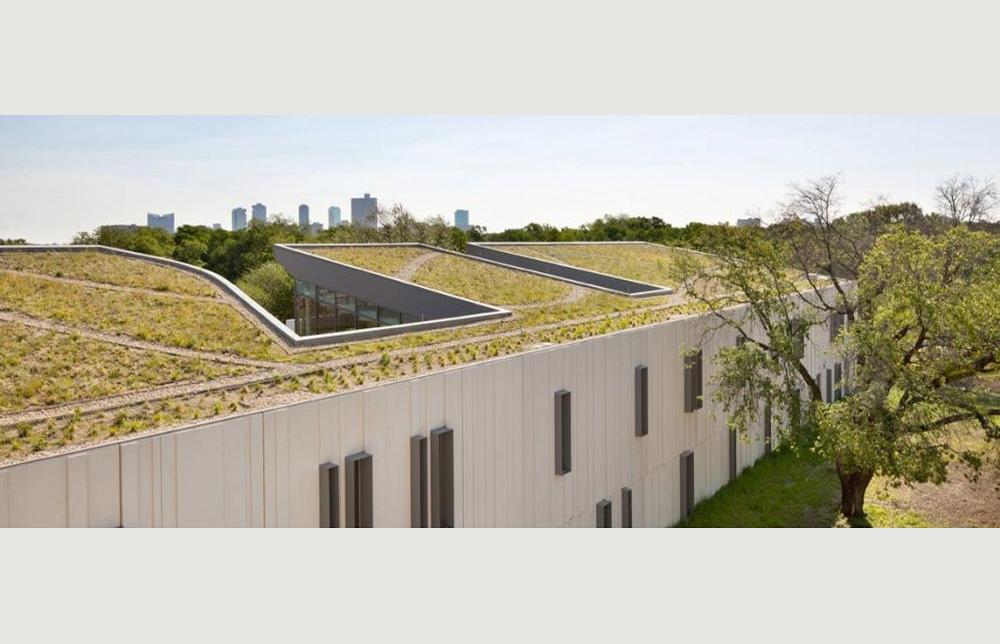 Architype Dialogue presents Hugh Hardy & Daria Pizzetta What was the most difficult issue about working on this building or the most unexpected challenge that may have influenced new......
More »Given the heat and the continuous presence of the Texas sun, the design team of H3 Hardy Collaboration Architecture and Balmori Associates, landscape designers, employed the play of light and shade as a key design element in the new headquarters for the Botanical Research Institute of Texas.

The design clearly organizes a variety of separate yet interconnected functions by dividing the building into two structures: the “Think Block”, housing the administration and research offices, education department, exhibit area, and public spaces, and the “Archive Block”, housing the herbarium and library.

The Think Block is a place for people. The long two-story rectangular structure of precast concrete panels is punctuated with glass—broad expanses on the north side to bring in plentiful light and smaller openings on the south. The second level features one large terrace for events and two smaller ones configured to bring daylight into the depth of the building. In the office and research spaces, the conference rooms are cantilevered out from the north facade, providing further visual connection to the greenery outside.

The Archive Block is positioned perpendicular to the public building and houses the extensive collection of botanical specimens in the Herbarium, a two-story 20,000-square-foot climate controlled storage hall, together with a distinguished book collection found in the library stacks. Because of the delicate nature of the specimens, the structure is nearly windowless—a solid box of tilt-up concrete panels to provide maximum temperature and humidity controls.

The main entrance to the campus unites BRIT with the Botanical Garden and consists of a major display of plantings based on “systematics”—a branch of study at the core of BRIT’s mission. These lush, colorful plantings lead visitors from the parking lot to the organic trelliswork canopy that shades their path into the building. As visitors enter, they are presented with a striking lobby, with a view through floor-to-ceiling glass and a grand central stair, and can also see the entire 300 foot length of the “Think Block.” This central circulation spine eases wayfinding and ensures that visitors and staff interact as they move through the building. Elevators are located in a two story sky-lit bridge space that connects the two Blocks and provides orienting views to the outside.

The building’s exterior character acknowledges the intense climate of Fort Worth in site placement, materials, and façade design. On the concrete facades, overlapping vines of different patterns of foliage, texture, and color respond to shifting sun angles during the day and changing seasons throughout the year. The building is set into the contours of a gently sloping site, preserving handsome live oaks, and will continue to become a harmonious part of the landscape as the vines ascend its facades. The sloping living roof of the Think Block is covered with informal patterns of regional sedums and grasses, providing a niche for preserving the beautiful Fort Worth Prairie in a new form for the future.

The interior character of the building is that of a work place, offering an environment where research, informed study, collaboration, and education can take place in a collegial, inspiring atmosphere. Floor to ceiling glass on the north facade fills spaces with generous natural light. Specification of local and renewable materials with recycled content plays a large part in the building’s anticipated LEED-NC Platinum certification. Bamboo ceiling panels and a dramatic sinker cypress feature wall in the lobby highlight a sophisticated panoply of materials that are healthy, sustainable, handsome, and durable.

The spirit of environmental responsibility and botanical awareness is manifest in all components of BRIT’s new building. From rainwater management across the site—very important since Fort Worth’s climate often follows droughts with torrential rains—to the building’s orientation, configuration, use of materials, planting selections, and energy systems, every aspect of the design is informed by the preservation of the earth’s resources.

Interspersed with amber LED lights, the striking feature wall in the lobby is made of sinker cypress logs, reclaimed from where they had sunk to the bottom of the river during transport to market over 100 years ago. Materials throughout the building, including bamboo ceilings, botanically-themed wool carpets and signage, and educational exhibits help convey BRIT’s preservation mission.

The use of geothermal wells permits mechanical systems to take advantage of consistent groundwater temperatures year round, while solar cells on the roof provide fifteen percent of the building’s energy. Interior lighting systems are controlled by motion detection sensors, and exterior systems are designed to Dark Sky standards. A retention pond and cisterns capture stormwater runoff from the roof and parking areas and reuses it for irrigation.

Taken together, the project’s elements create a fitting new home for the Botanical Research Institute of Texas.