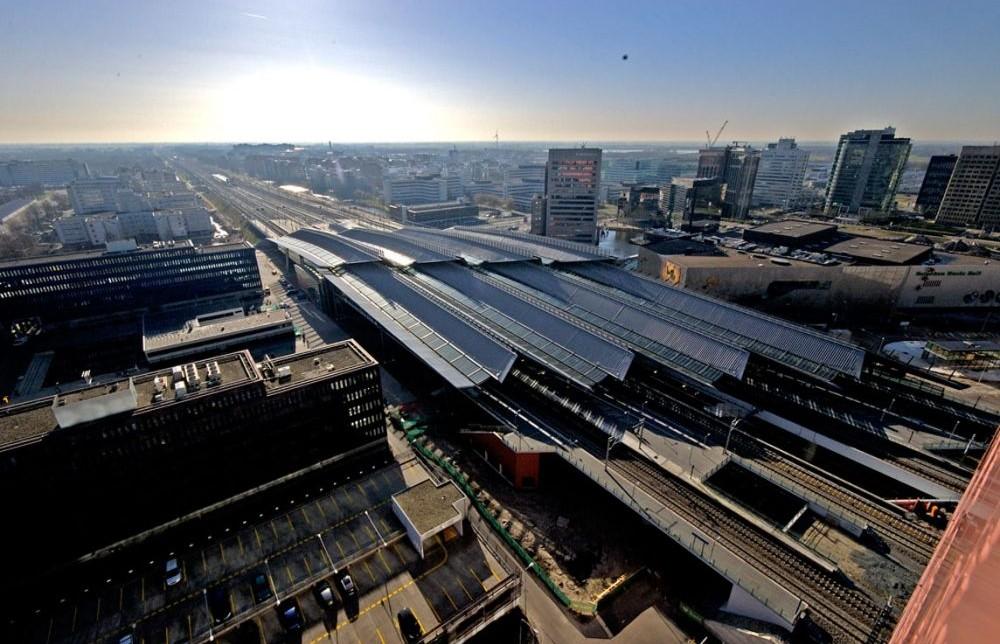 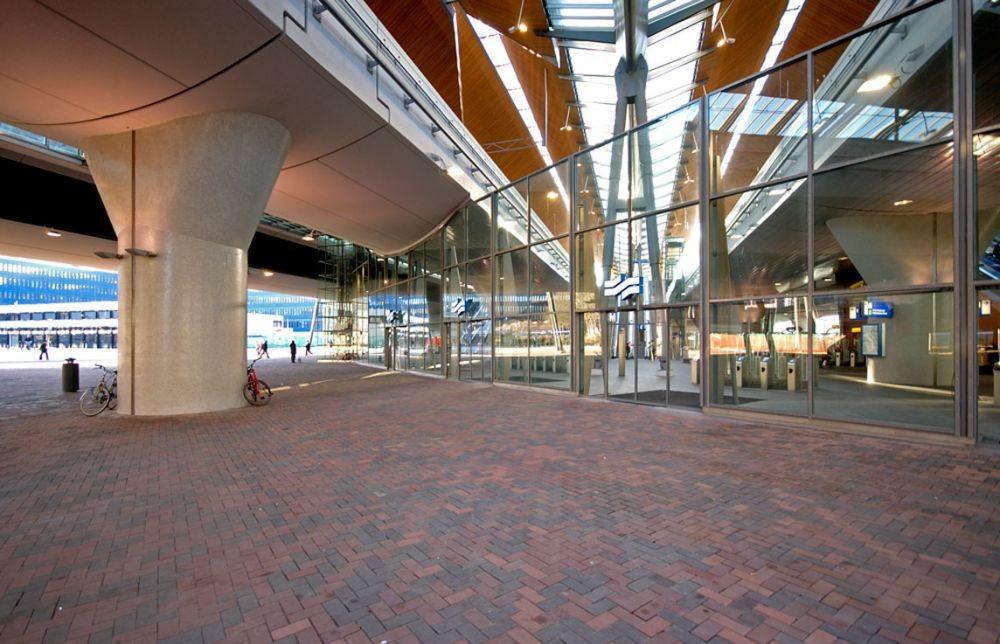 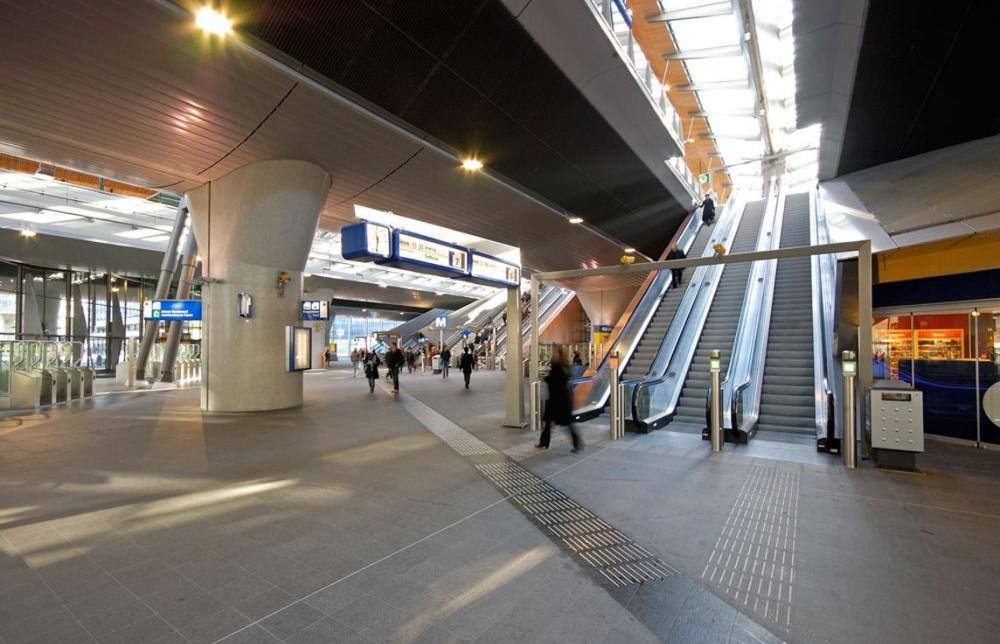 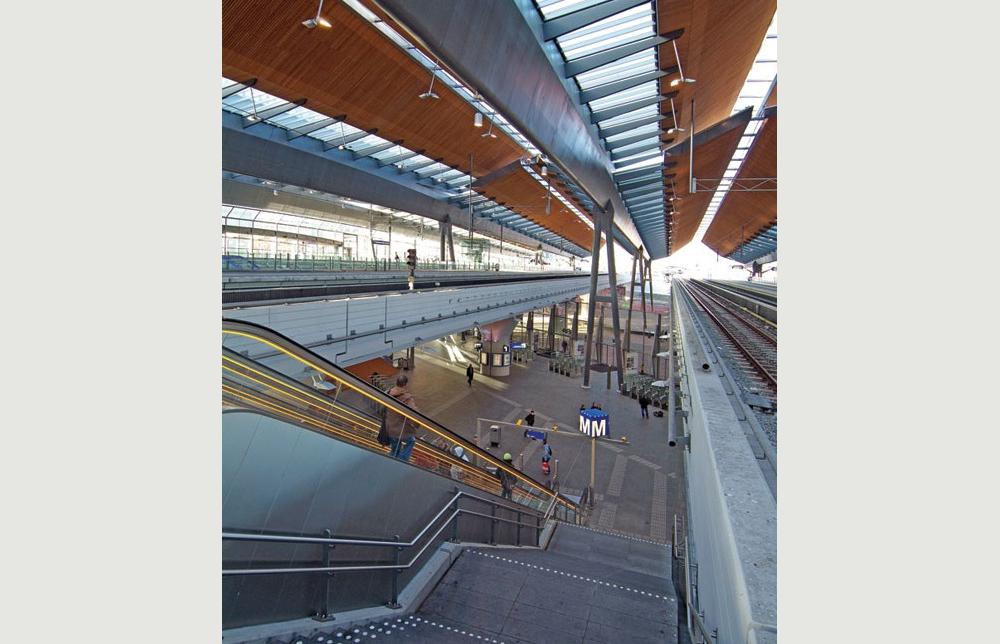 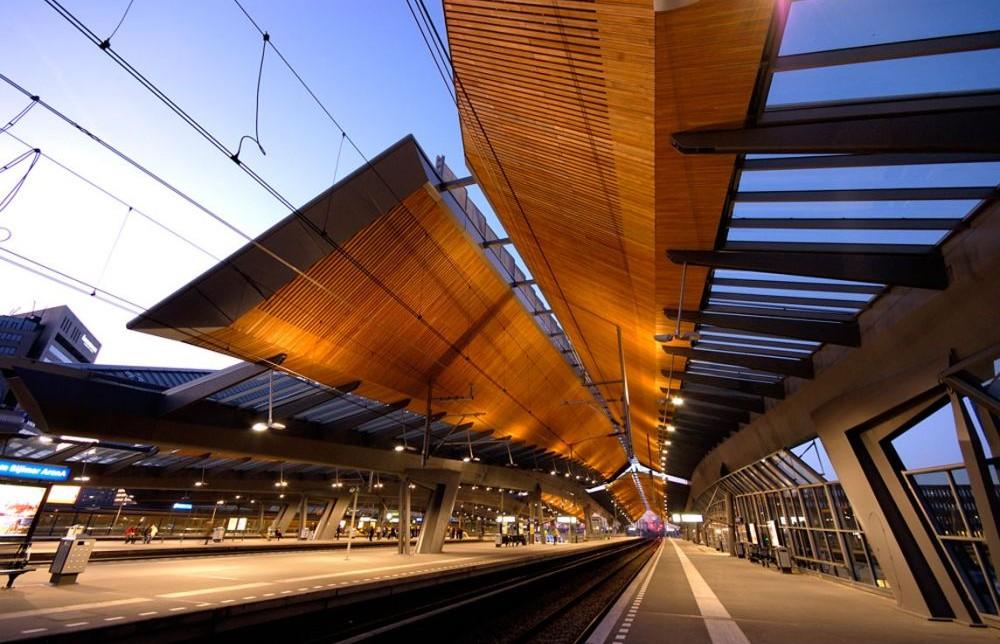 Bijlmer Station is the result of collaboration between the City of Amsterdam and Dutch Railways. The project creates one of the five largest stations in the Netherlands, handling approximately 60,000 passengers per day. It links two districts previously divided by train tracks and also serves as a major interchange for passengers connecting to Metro lines and bus routes.

A key challenge was to design a station that could be constructed without encroaching upon the day-to-day operation of existing facilities. A 70-metre wide diagonal boulevard, linking east and west, provides the solution. The tracks and platforms are raised above the boulevard on two-storey concrete viaducts with a roof structure covering the central section.

Every aspect of the design process was informed by the need to civilize these viaducts created by the eight elevated tracks of the station and to create a pleasant and safe ground level public space. To avoid a dark 100m long tunnel, the concrete structures were spaced apart. Each 20m span was supported at each end on just one column via an integrated cantilevered saddle. Arrays of columns were then aligned on axis with the boulevard to maximise visual connectivity from east to west. However, the most important decision concerned the roof design in general and its soffit treatment in particular. It is the modulation of this surface, its ribbons of roof glazing and its acoustically absorbent Oregon pine surfaces that convey civility from the perspective of the boulevard and the platforms below.

The base-element of the roof structure is a V shaped continuous hollow steel boom with steel arms cantilevered on either side to support all the roof glazing. The combined assembly is supported on a series of tubular A frames with only a single deep longitudinal stabilizer near the south end. Beyond their last supports these booms cantilever up to 18m thereby enhancing the sense of linearity and direction. The timber lined elements straddle each track-bed and are open at ridge level to assist natural ventilation and allow areas for pressure release in respect of 200k/h trains.

The lack of land to either side dictated a corresponding diagonal station hall facing the boulevard under the tracks. This diagonal slant dictated that the escalators, stair, lifts and roofs all be staggered. To signal the presence of the buried station hall from the surrounding area it was decided to gently arch each boom structure and to split all roof planes above the primary vertical circulation. The stations angular aesthetic is derived from this methodology.

The station is designed to provide a high level of social security both during the day and at night. Long voids are cut into the platforms to break down the overshadowed sections of the 100m wide area below the viaducts. These voids improve the sense of safety through visual contact and improved transparency between the platform and ground level areas.

They also permit the boulevard and bus station areas to be flooded with natural light. The station hall and platforms are also designed for maximum transparency to improve the orientation of travelers within the building. Escalators, stairs and glazed lifts lead the public from the central ticket hall up to the platforms.

The building has been warmly received in Amsterdam and is generally perceived as a catalyst for the development of the area on both sides of the tracks. Several related projects are already under way, including a parade of shops facing the station hall on the boulevards north side and the complete overhaul of the square immediately to the east currently cluttered with a series of temporary buildings.