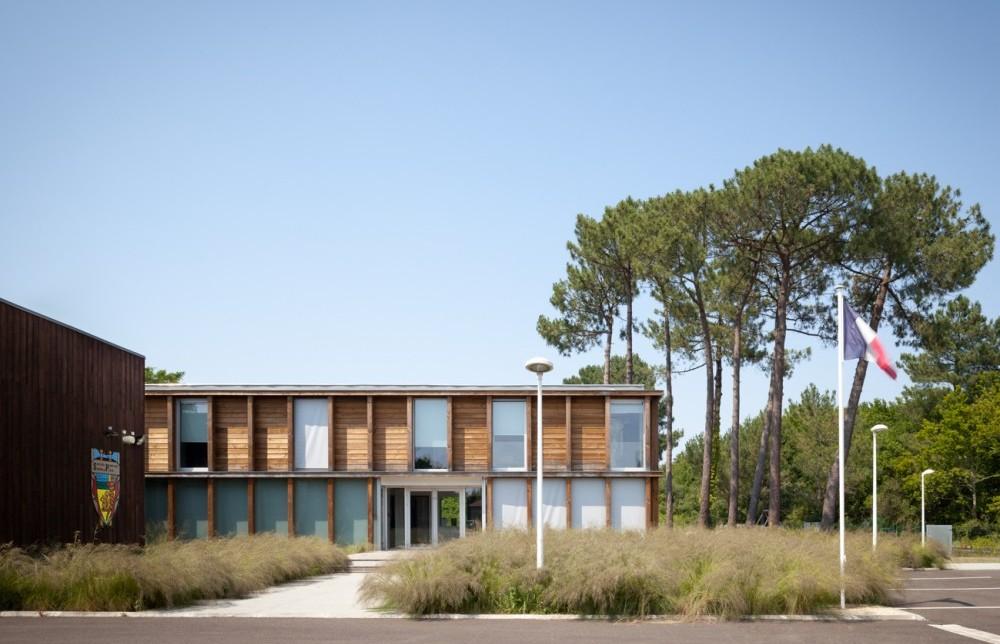 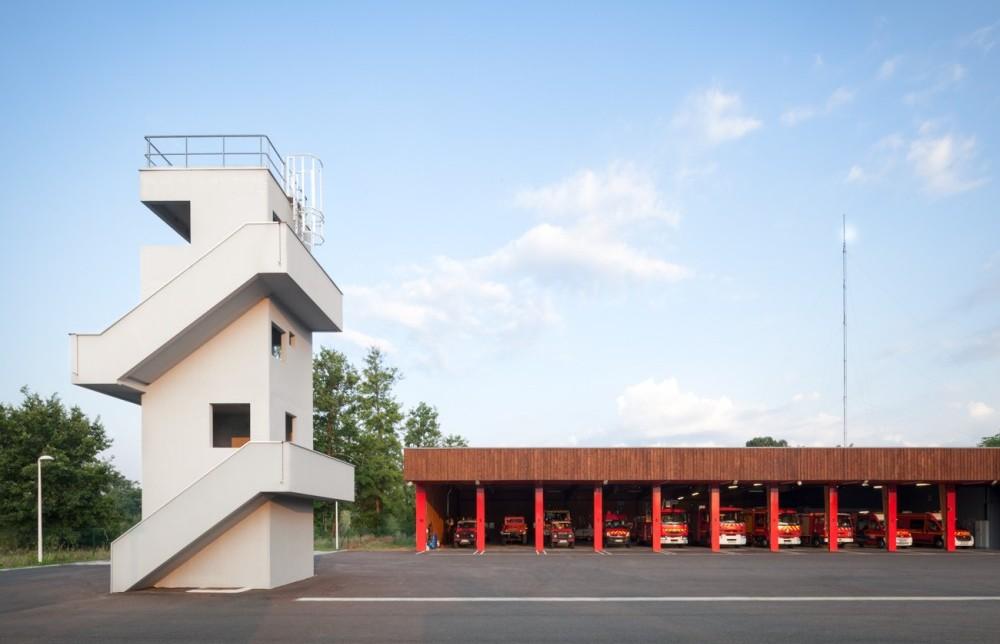 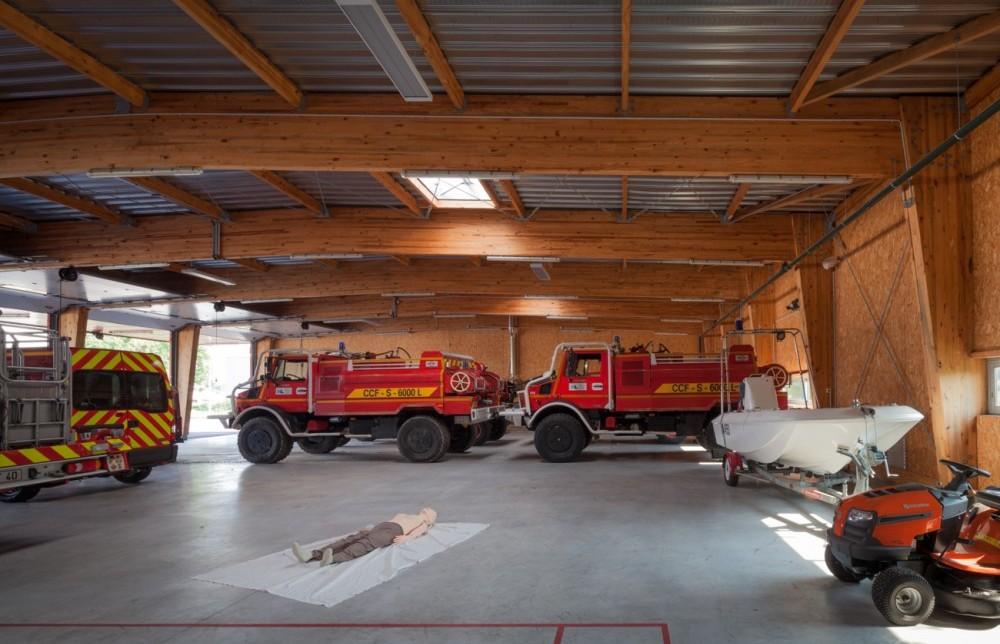 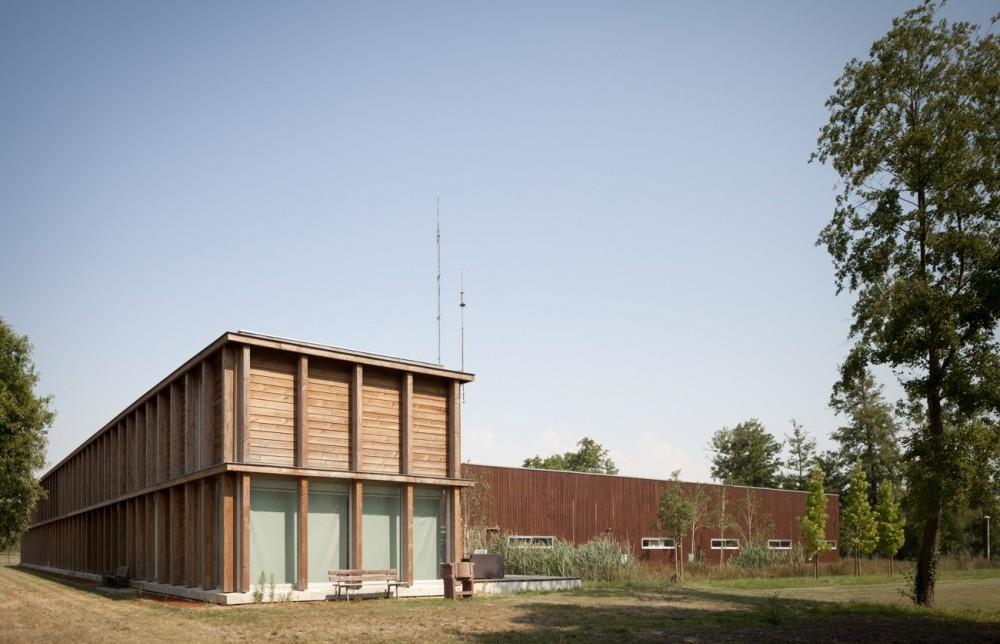 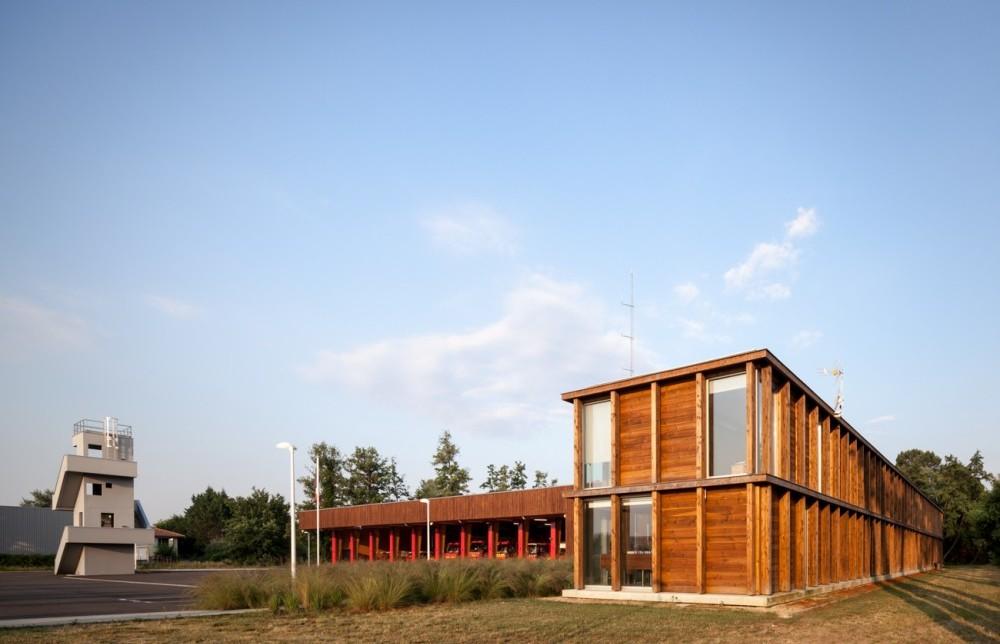 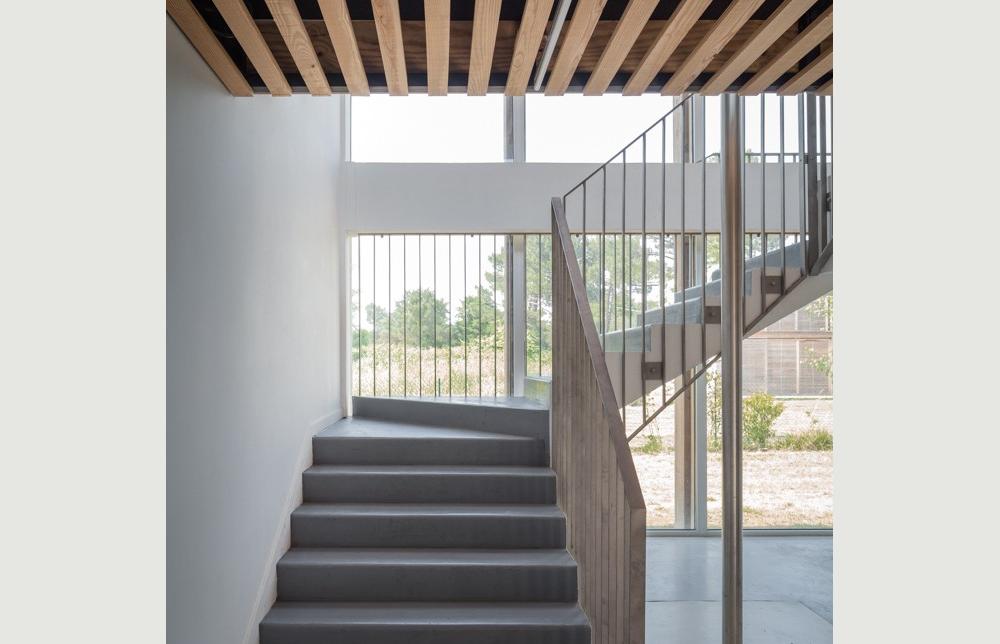 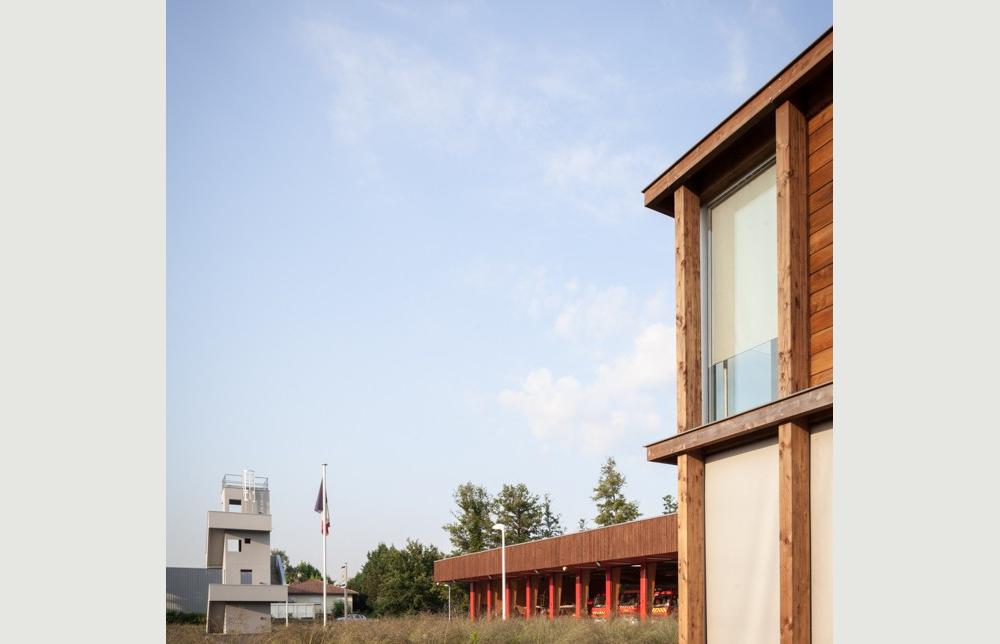 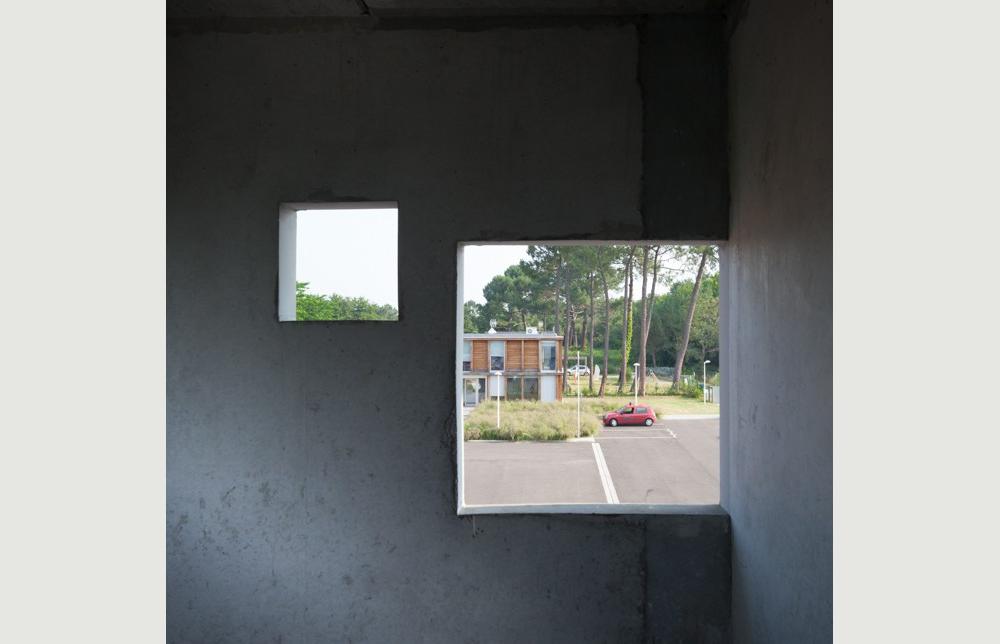 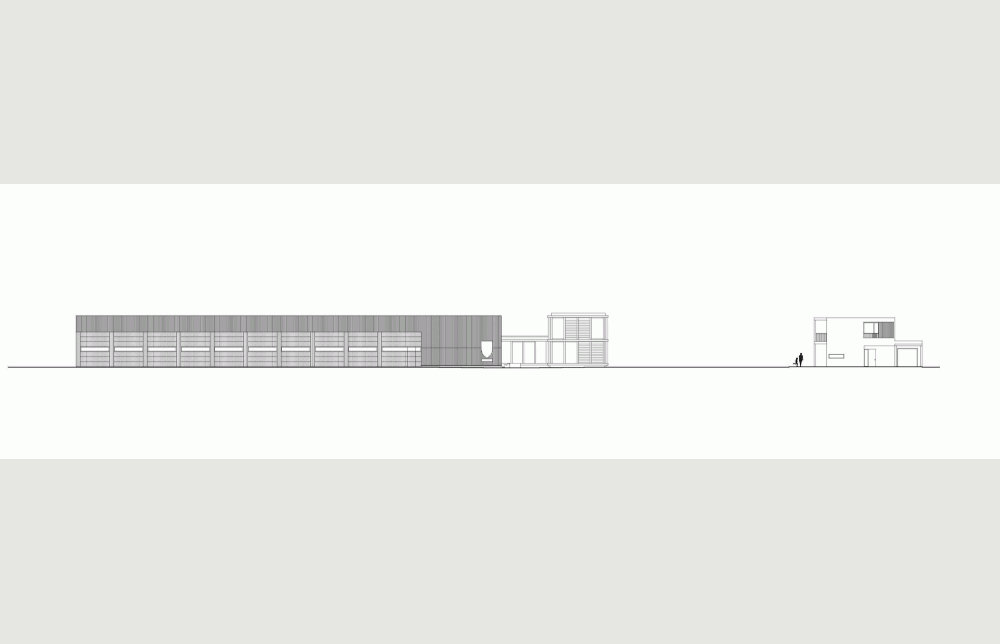 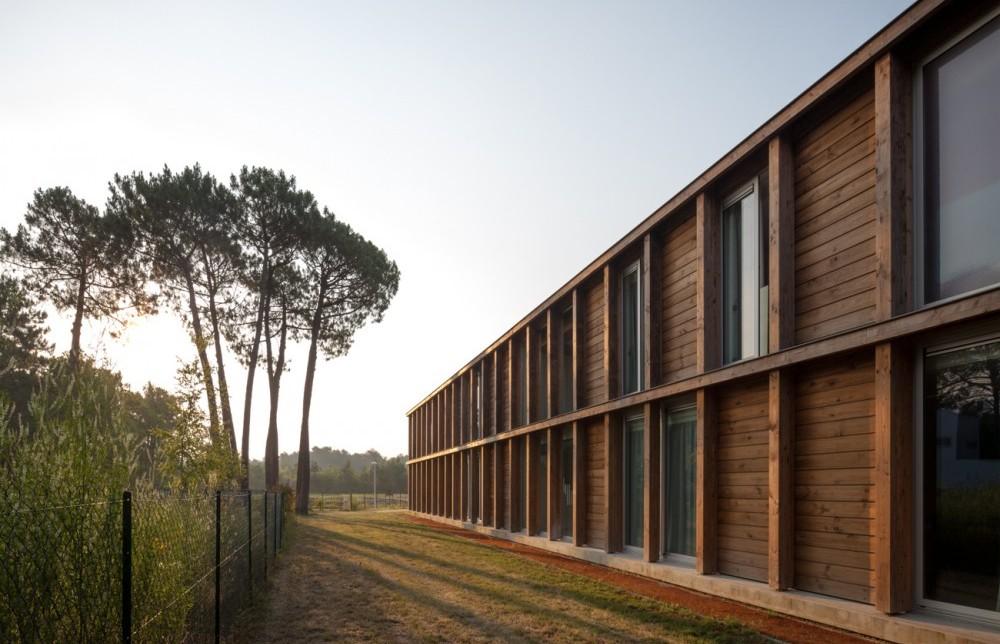 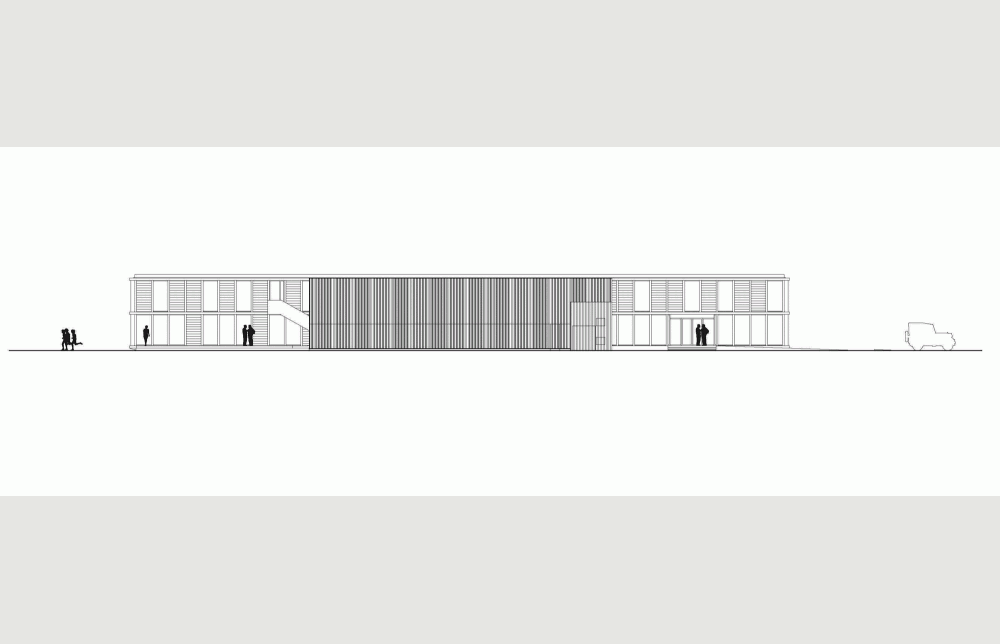 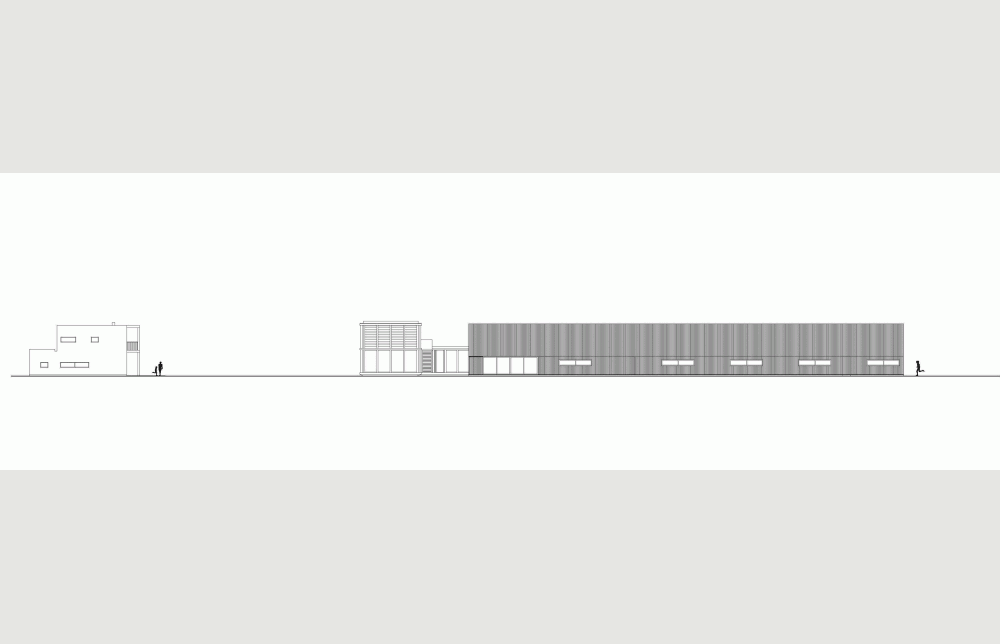 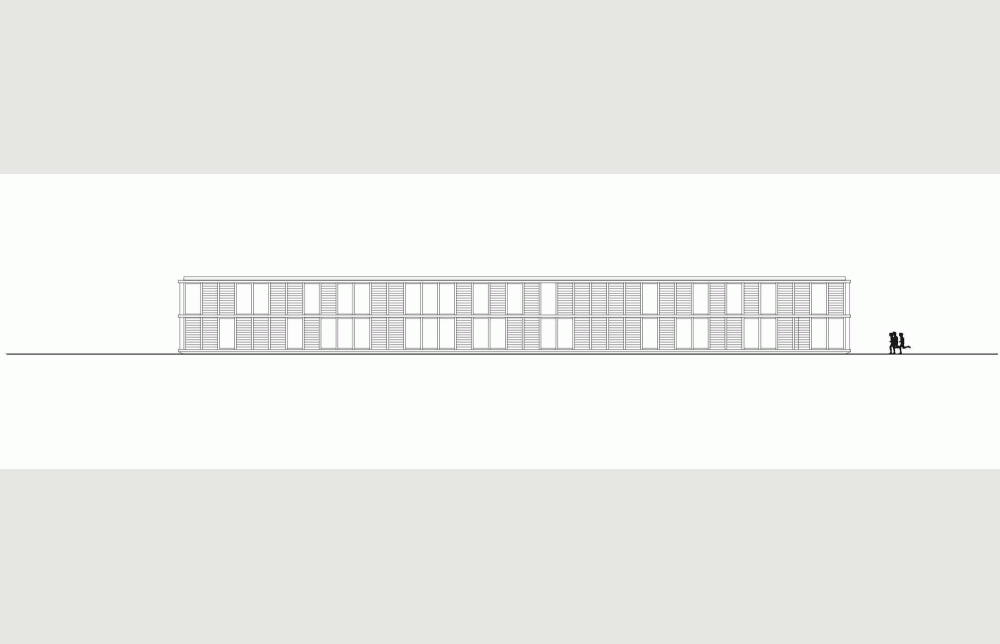 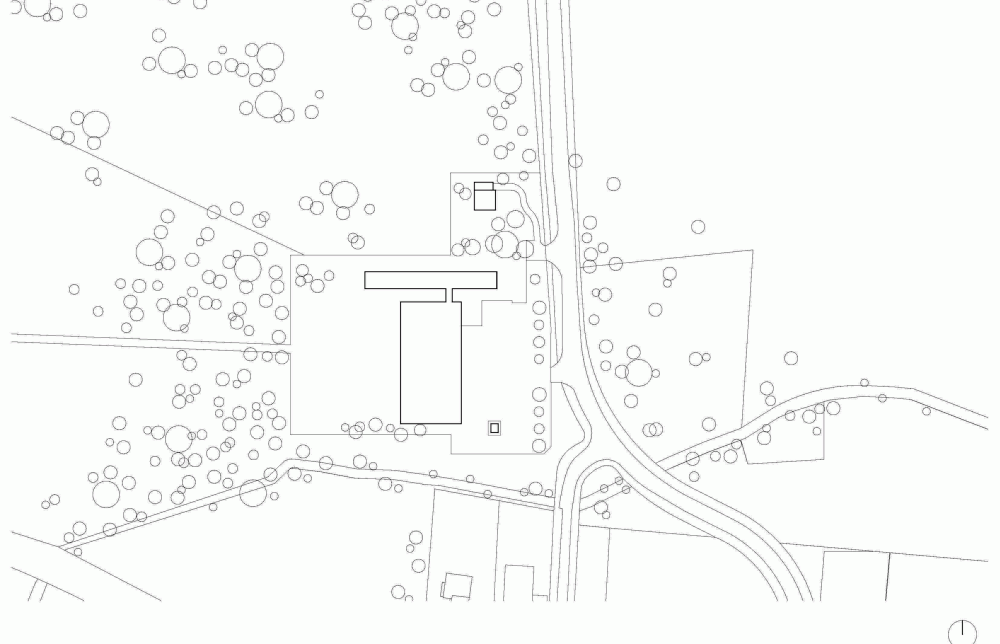 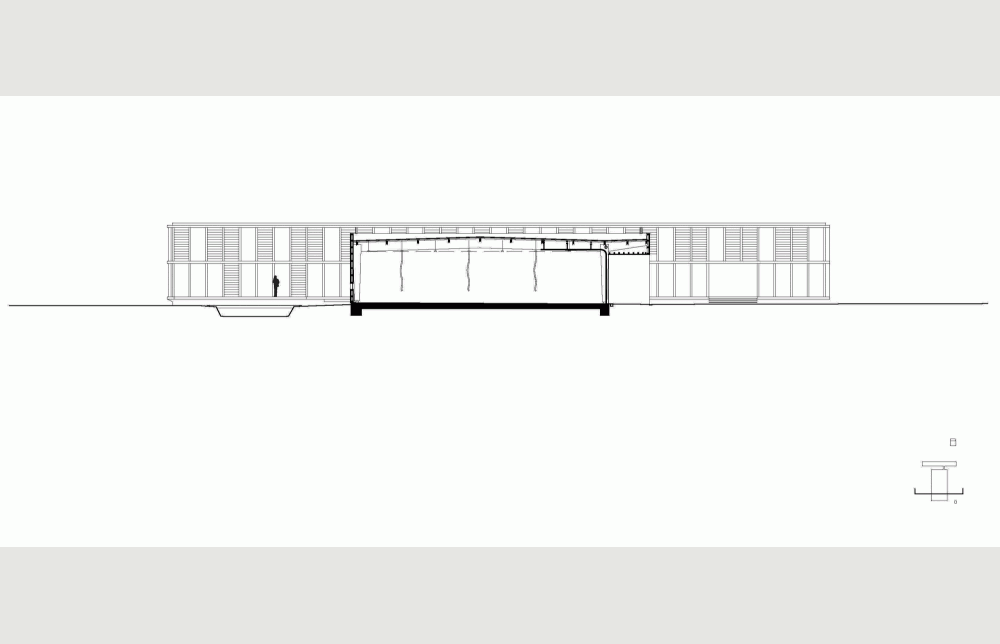 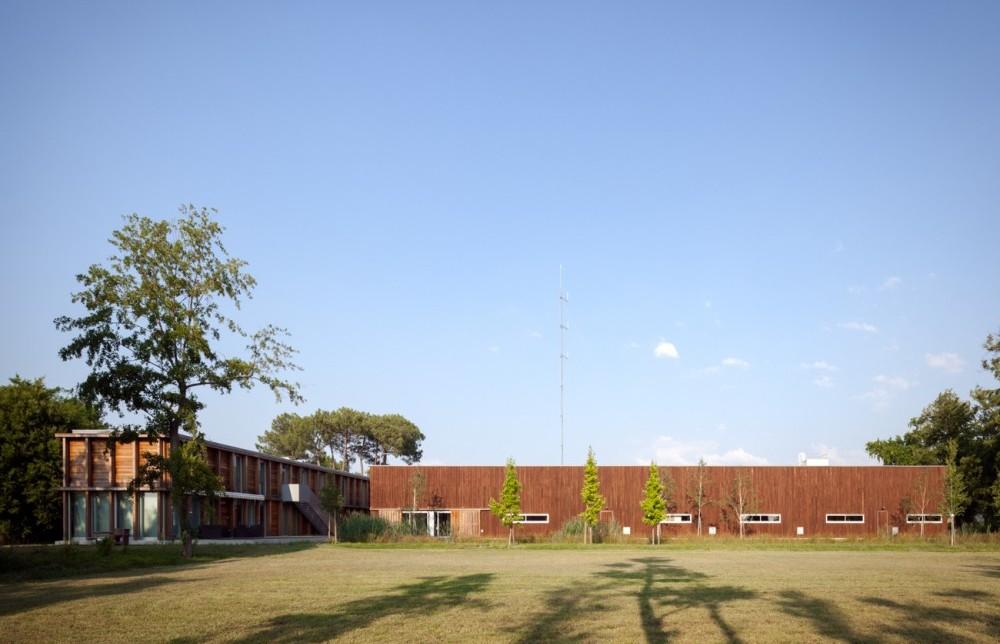 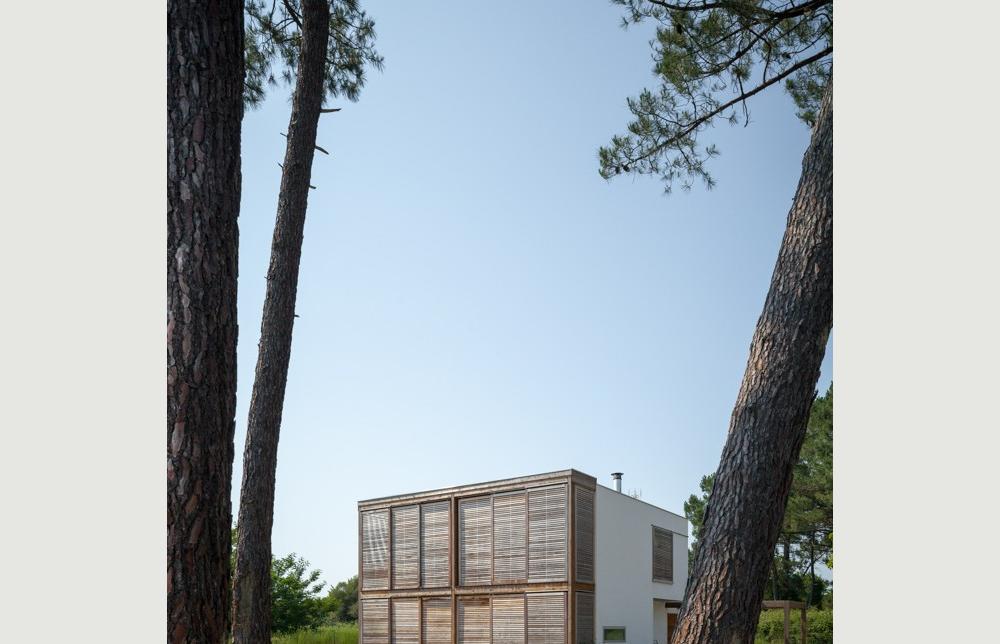 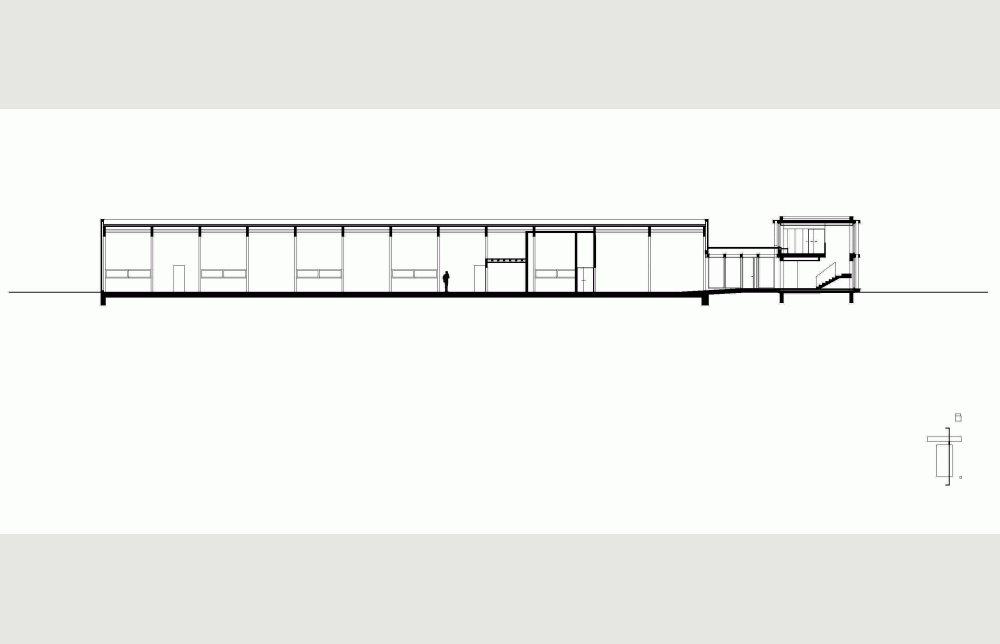 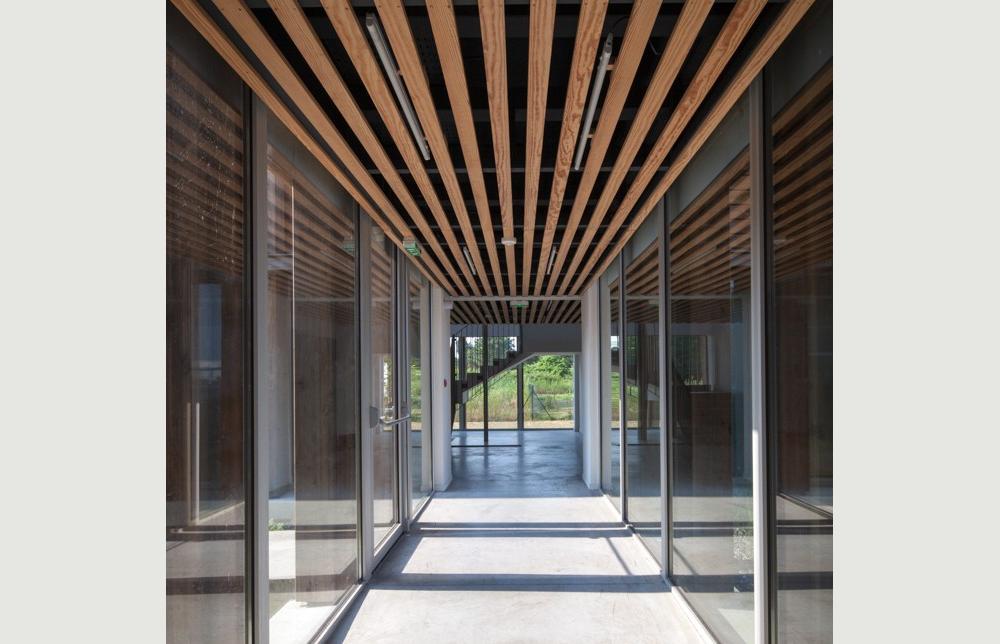 Between generic and contextual, between office and housing, between hyper-mobility and resting, the new fire station of Biscarrosse opened in October 2011, goes beyond its function to be part of the landscape.

Small town of the Landes region, Biscarrosse is stretched between the resort temptation and the extent of the forest. Biscarrosse has a third pole, less known from holidaymakers, Biscarrosse City, where is located the new main fire station. On the border of the urban area, facing a brand new shopping mall and at the edge of the forest, on the road that leads to the ocean: a site between green and blue, at the intersection of flows. The issue of the gateway to the city questions a particularity in the brief. Located at the edge between adventure and everyday life, the building has to integrate a very generic, perfectly prepared brief, consisting of a training tower, a main garage for trucks, an office building (which houses an office, a guard room, a dining room, a kitchen and dormitories) and a house assigned to the station’s director. Its functional organization is set to a very precise timing, optimizing mobility, an orchestration of urgency that ensures effective intervention on a daily basis.

This facility is designed to accommodate a brigade of 80 firefighters, civilians and volunteers. Despite a generic and functional program, the building plays with the local landscape, including the use of endogenous material, the maritime pine, used as structure for the main building but also as cladding for the facades. Bioclimatic strategies can solve the over-heat of the summer through the use of cool underground water. Green areas are planted with ferns that set the sand while rainwater feeds into landscaped swales. The overhaul draws autonomous green spaces, with local trees, keeping the context and character of the ”wild” forest.

The primary feature of the programme is its duality : a place for living/a place for working. This characteristic takes on a unique calibre at Biscarosse. Sited across from a forest, away from more bustling areas, the main housing block takes its silhouette from the traditional villas of the Landes. The north-south orientation of the string of offices creates a double usage of space.

Located at the eastern edge of the building site, the alarm cell controls all comings and goings The canteen, classrooms, and dormitories used by the teams are placed to the far west to preserve the natural environment and its sense of intimacy, all the while remaining close to the engine house. The figure-ground streamlines the inherent flux of activity and people that personifies an emergency centre. The question of scale becomes the third axis of study that lends structure to the development. With the exception of the training tower, the projects buildings keep flush to the landscape, favouring the collusion between the place, its inhabitants, and its site.