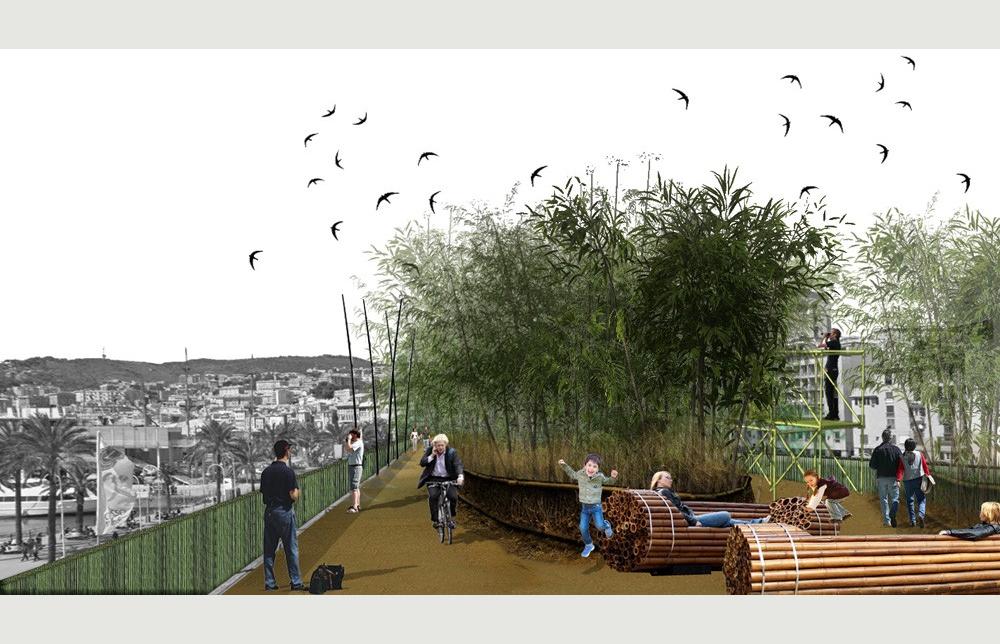 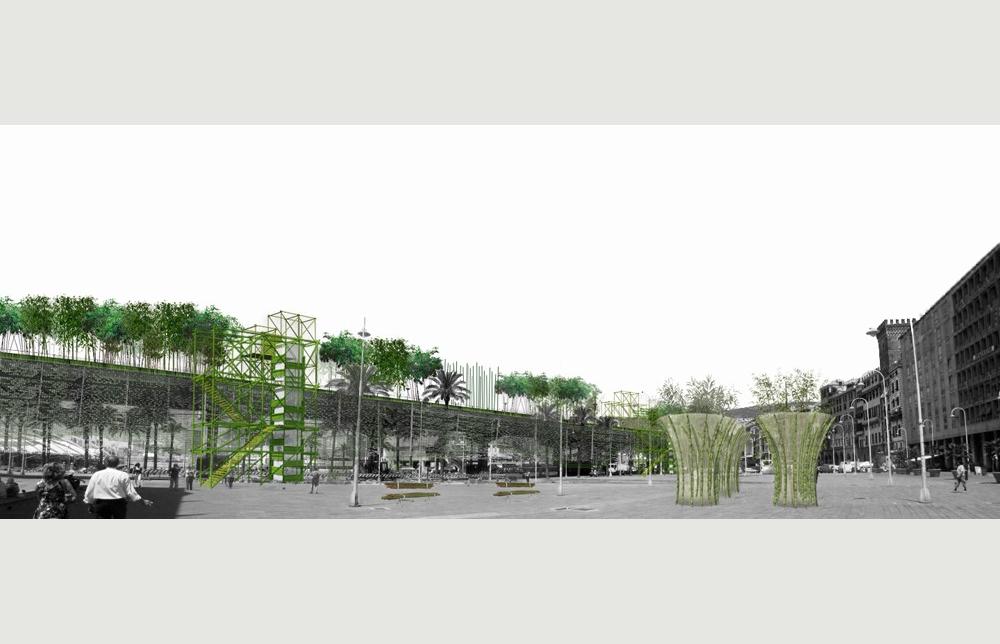 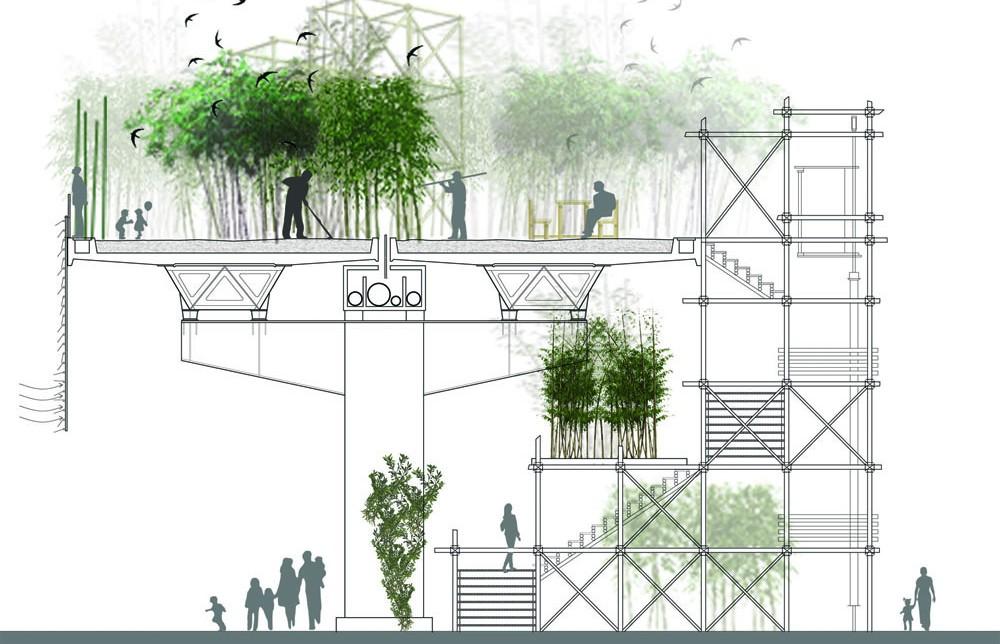 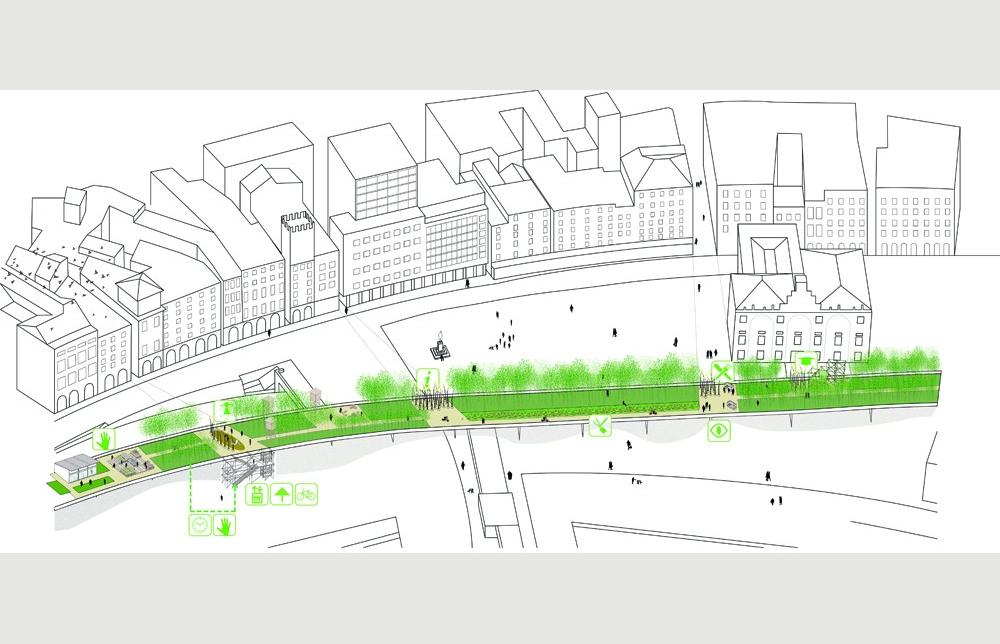 The design concept provides the formation of a public space for all new “identity” : a green area, sustainable where everyone can meet up , lie down, play , study, work, dance, relax, contemplate the beauty of the visual and sensory seascape , learn, educate children, cooking, farming and self- built over the overpass of Genoa.

Through the self-construction is the single cityuser involves giving way to improve first-person operation and the quality of the urban space of the overpass .

Along the infrastructure you will have a true metamorphosis : it will rinaturalizzata through a plantation of bamboo and ornamental plants , that with their rapid development will expand easily wrapping and turning it into a productive green park . The benefits are in addition to visual and olfactory comfort , cooling in summer . The new spaces will be in constant evolution, with the ability to build itself spaces , depending on the needs of its visitors, an increasingly complex society , where the needs for training, information and shared processing increases.

The interventions were planned to reduce costs and limit following a time schedule :

– Phase 4 SELF BUILT and educational activities.

The overpass will be; not only an attraction for the city, but an item from which to observe, through a special point of view and perspective, the beauty of the sea and the surrounding cityscape and a new energy source for the city.

Bamboo belongs to the family Gramineae, is found in tropical climates but also in temperate climates.

Are plants that can reach considerable dimensions, from 2 up to 20 cm in diameter, from 1 up to 15 m in height, rhizomatous roots that grow horizontally to a depth of at least 25-30 cm.

Evergreen, resistant, lightweight, energy-efficient, renewable and natural origin thanks to new manufacturing technologies is an economic and versatile material for use.

atmospheric carbon, thereby helping to reduce the greenhouse effect. A bamboo plantation is able to capture up to 17 tons of carbon per hectare per year, an amount of about 40 times higher than that absorbed by a forest of the same size.

It is in various forms: a Chair, a table, a bench, a tripod …etc. you get a homemade object, versatile allowing you to decorate the urban space according to your desire or need.

Allows users whether they are citizens, tourists, workers and students to create, through independence from a tree or from a fixed, new space and self-managed in which movements are continuous, random and diverse.

So who covers the overpass from a concrete contribution by living together and building the urban environment, redesigning both spatially and qualitatively.

Bamboo is a plant of incredible beauty, for its robustness, lightness and flexibility find many uses: as human or animal food; as building material for the construction industry and architectural structures and buildings, structural and load-bearing parts, to arm the concrete, for scaffolding, scaffold braces, finishes and coatings for furniture and design: kitchen utensils, plates, bowls, chairs, furniture, gear, mats, baskets and other decorative items for DIY; for the production of paper, textiles.

Some species of bamboo are used in industry for the manufacture of cosmetic creams and lotions.

Its SAP contains amino acids, vitamins and many minerals such as Silicon.

The fragments and other bamboo processing waste can be used as fuel for heating, cooking, other furnace temperature machining.

The elevated area has several potential, such as passing trains produce wind, wind, rain Bay and its exposure to the South (always exposed to the Sun). By these features the choice of alternative energy systems that can exploit these capabilities such as:

-piezoelectric energy, with the curtain that comes down from the elevated piezo and piezo forest reminiscent of bamboo and takes advantage of the wind of the port by the bending processes to produce clean energy.

-you want to also take advantage of the wind produced by the passage of trains of the railway below through energy production by piezoelectric system.

-the cultivation of bamboo which, in addition to rinaturalizzare the area, has a strong ability to counter air pollution thanks to its ability to absorb carbon dioxide, thus helping to reduce the greenhouse effect.

The sopraelevata, Genoa will become a cooperating system that will revolve around three

• Green path-ecological-energetic agriculture, with the plantation of bamboo, the use of ornamental plants-vines such as Wisteria and jasmine and innovative technologies such as the forest and the piezoelectric curtain;

• economic-cultural path, which will represent the excellence for the city of Genoa, urban recreation space, teaching for citizens, tourists and students but also productive where will marketing international (fairs, markets, marketing and exporting).

credits for the images and text OAM Architecture