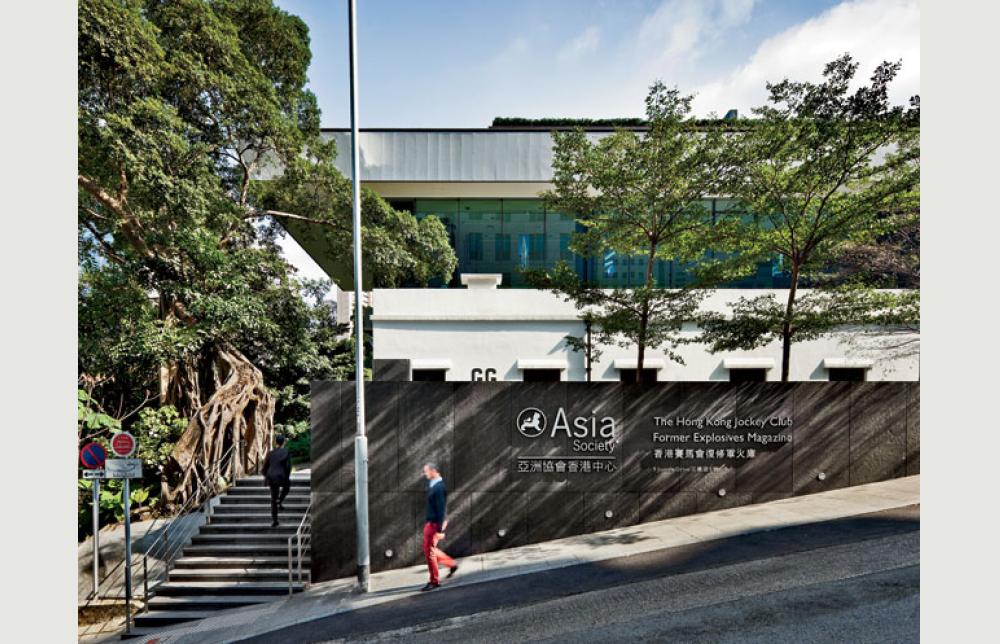 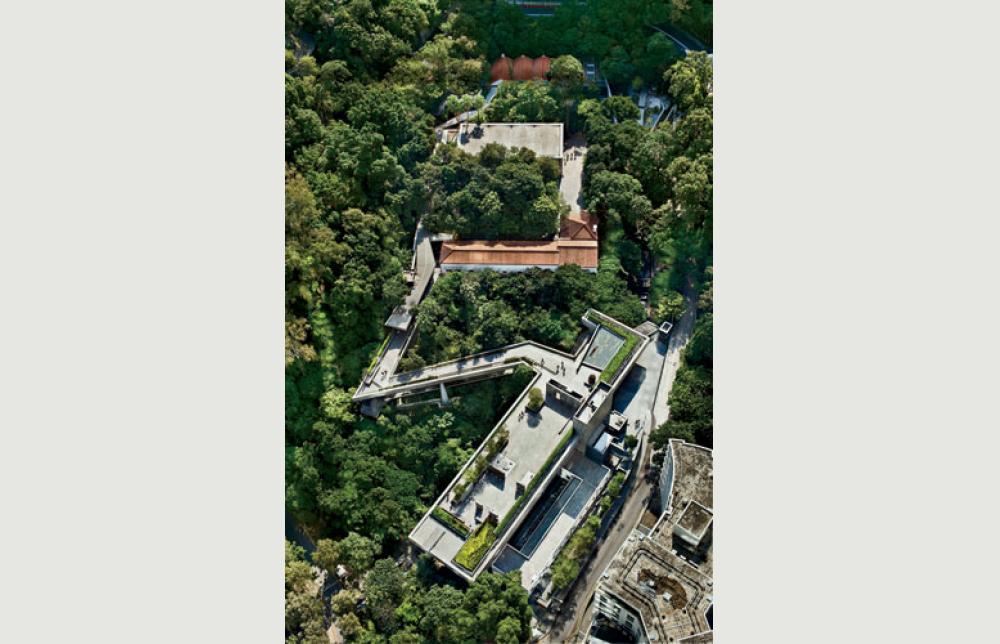 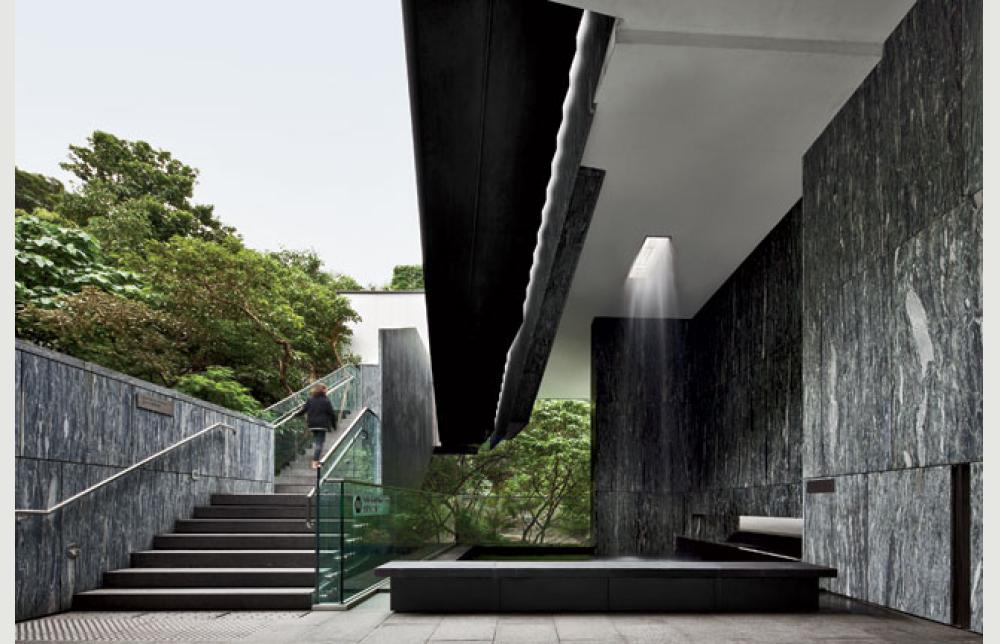 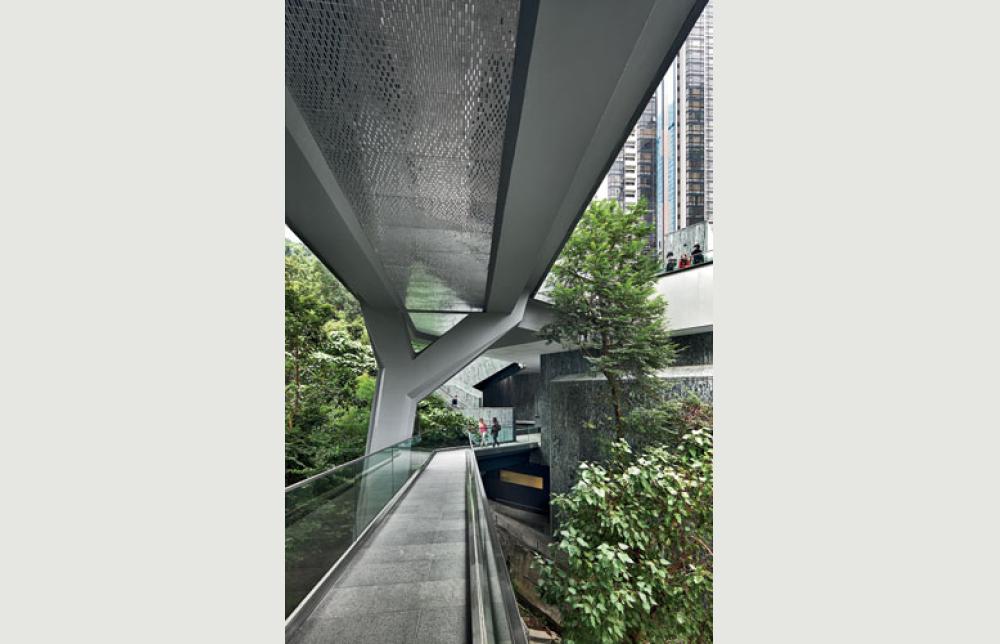 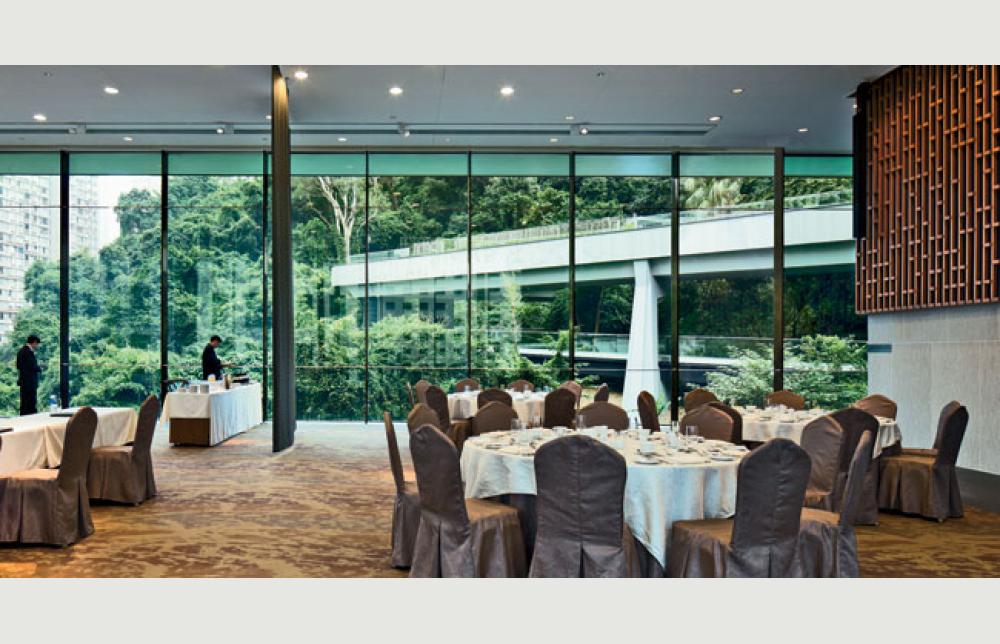 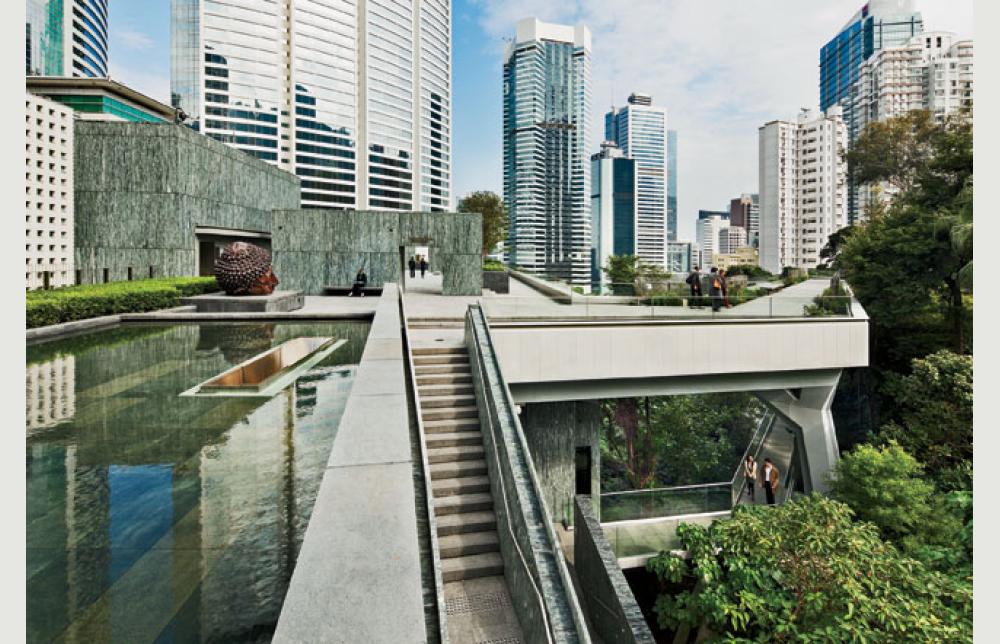 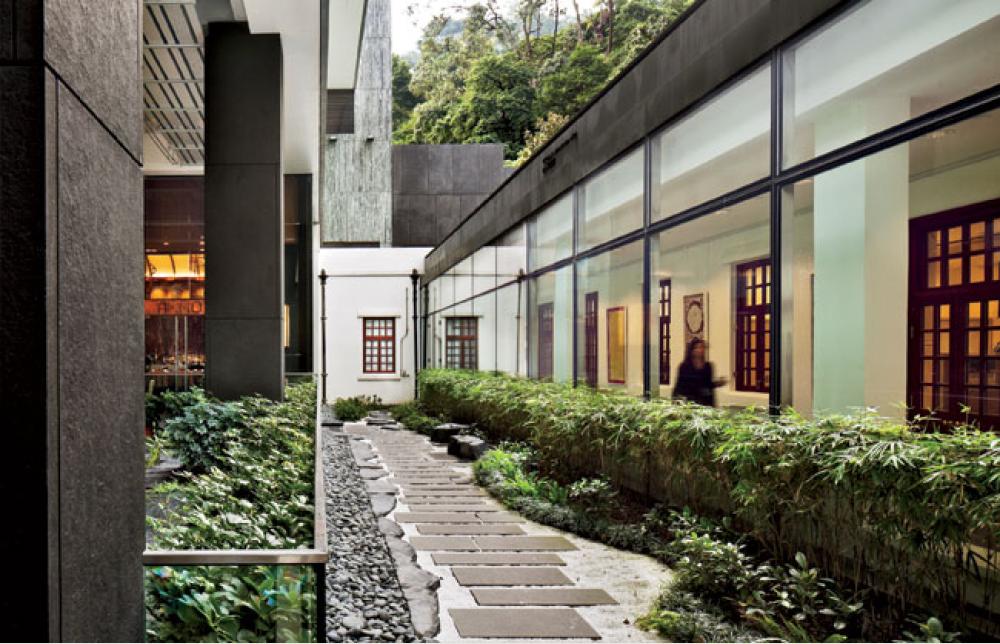 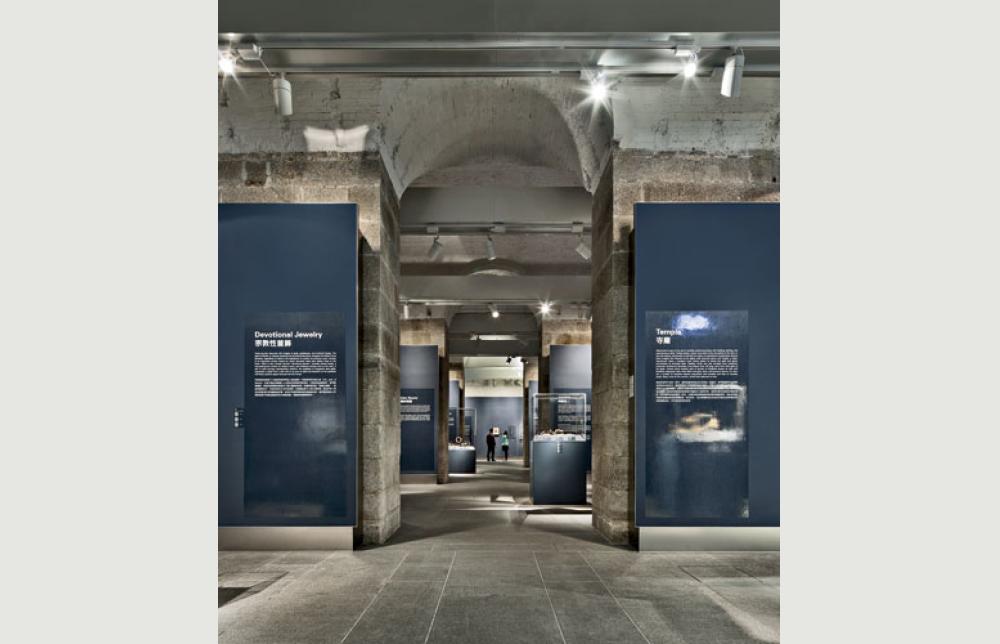 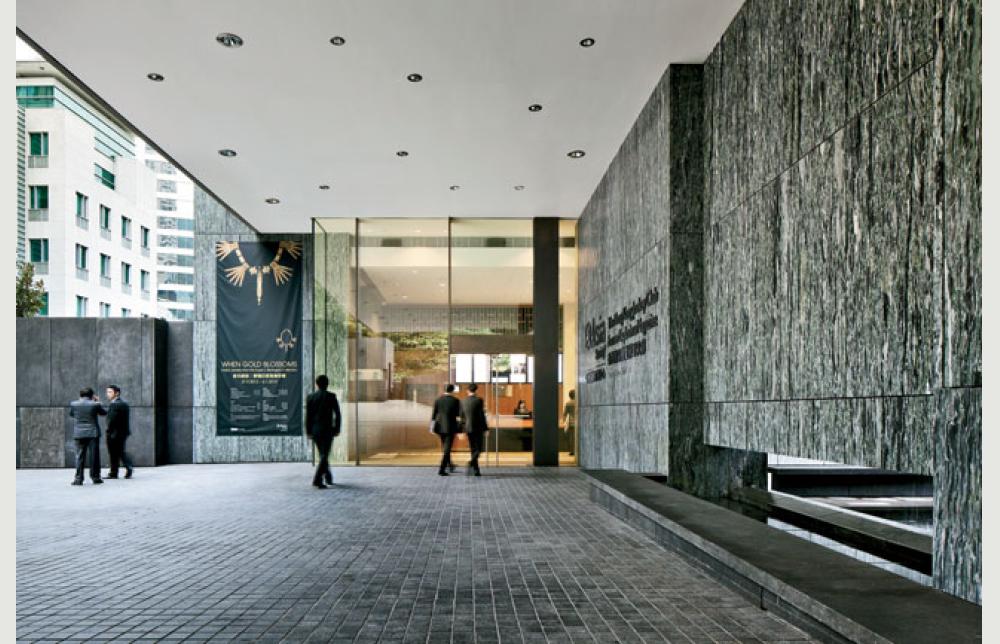 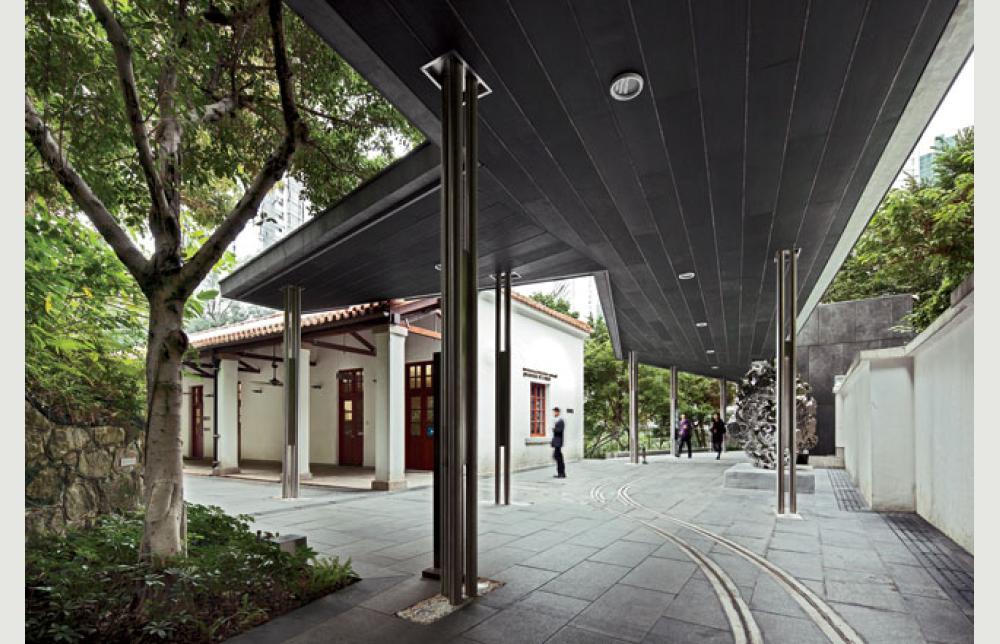 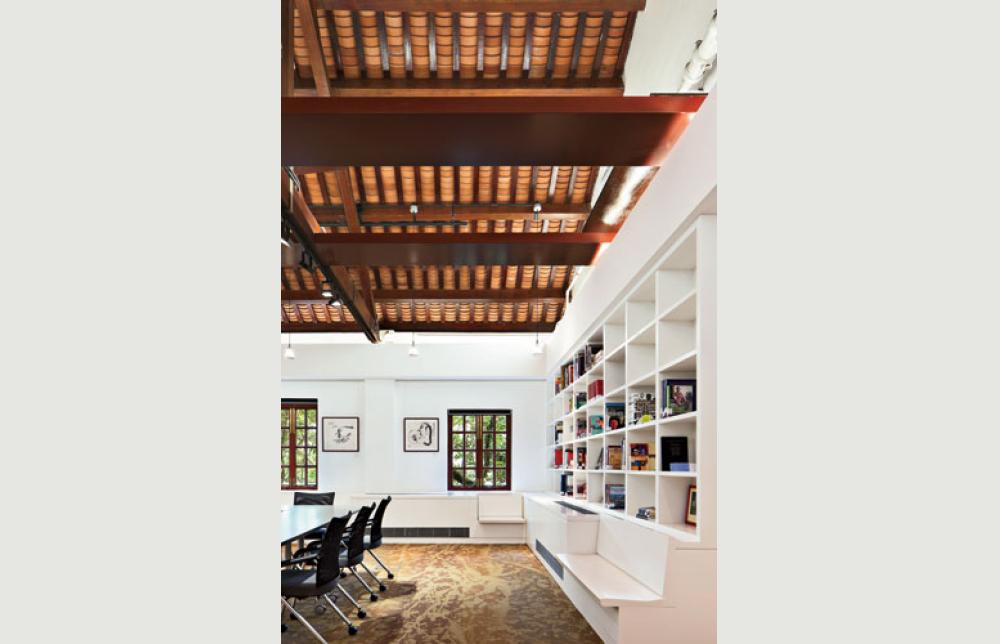 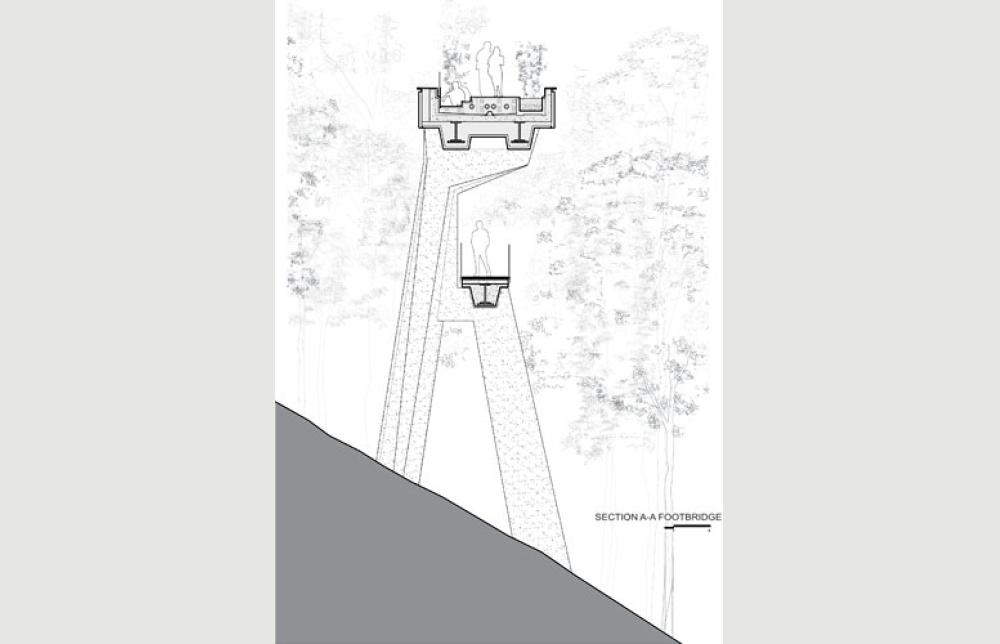 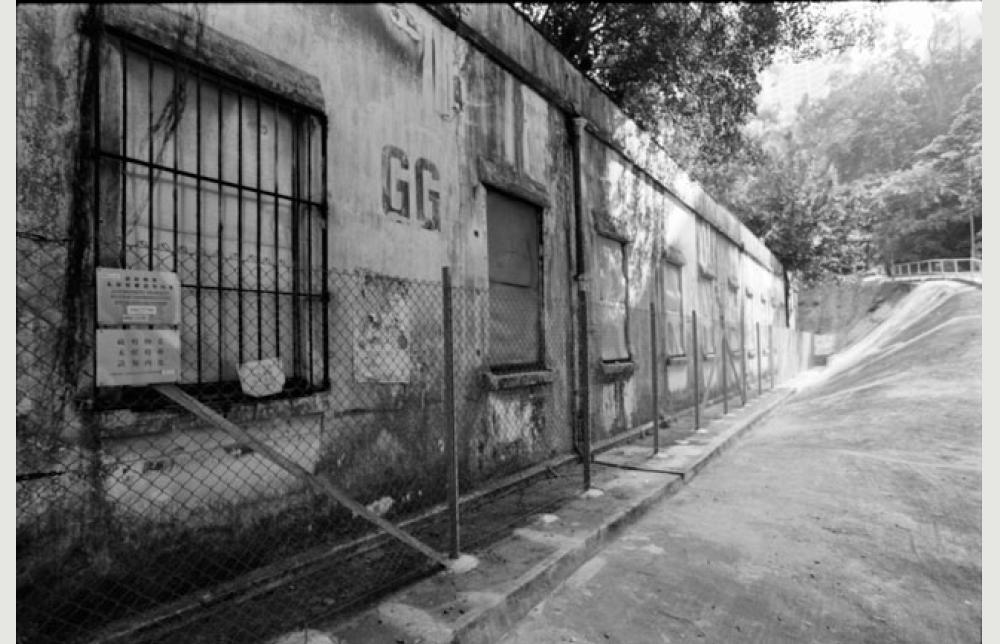 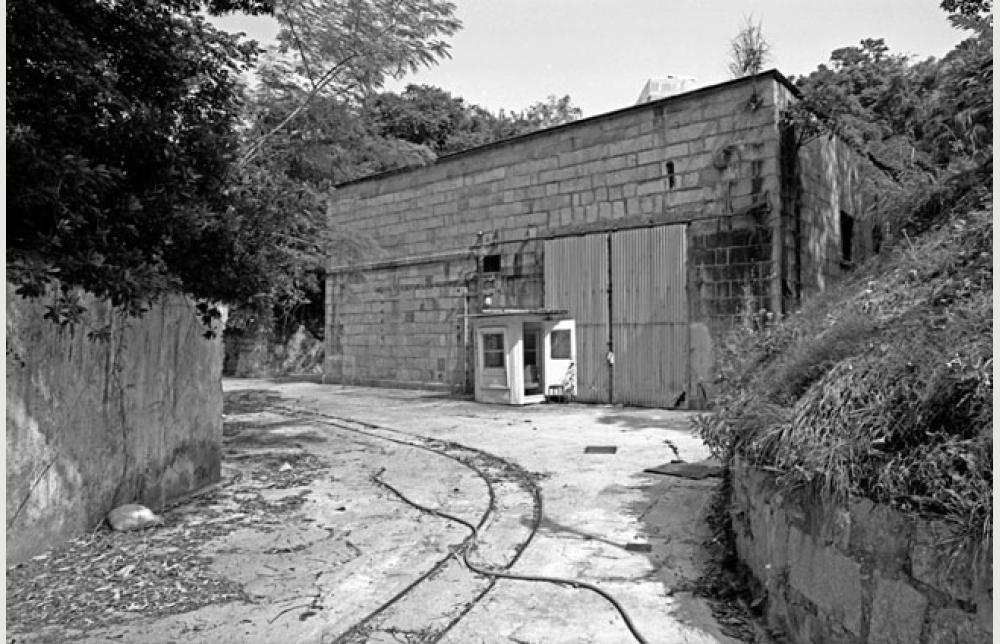 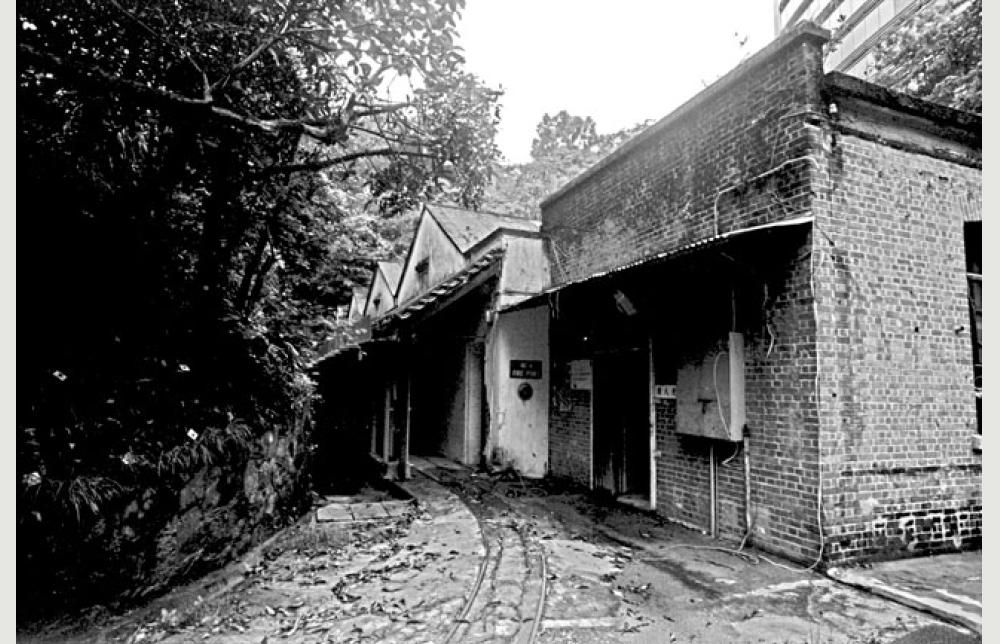 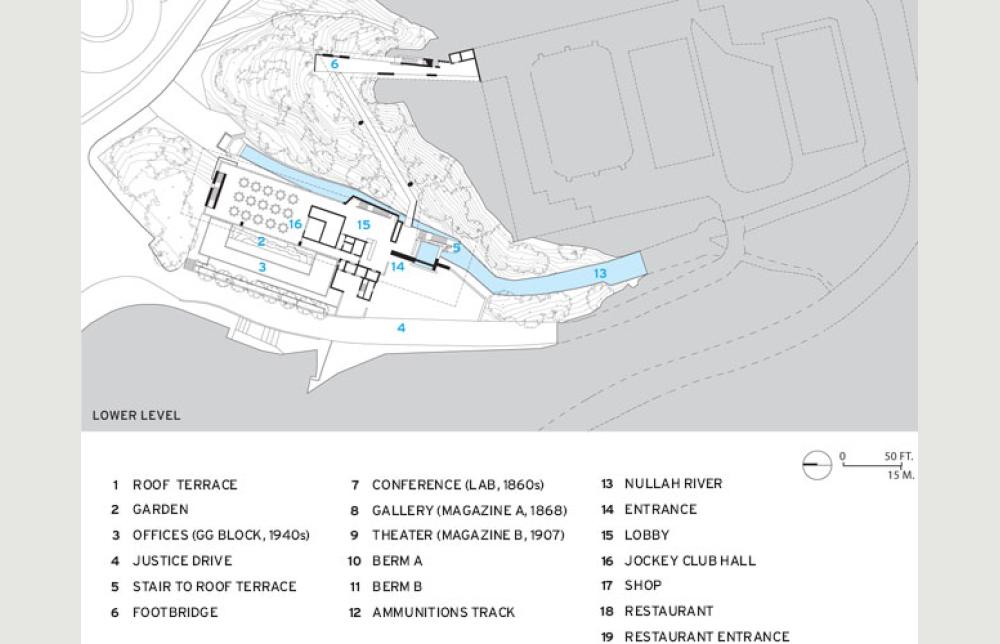 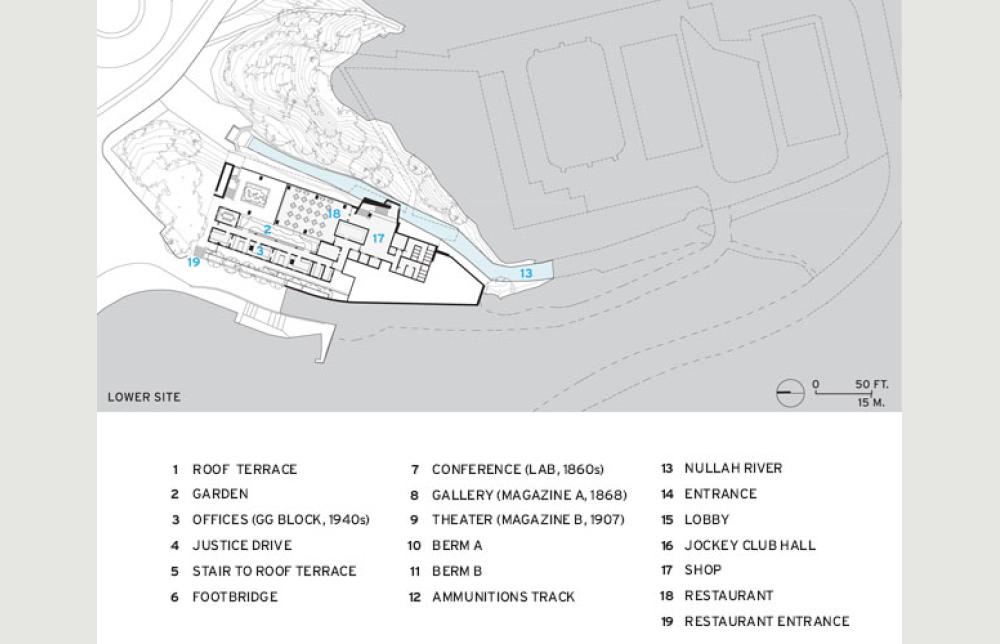 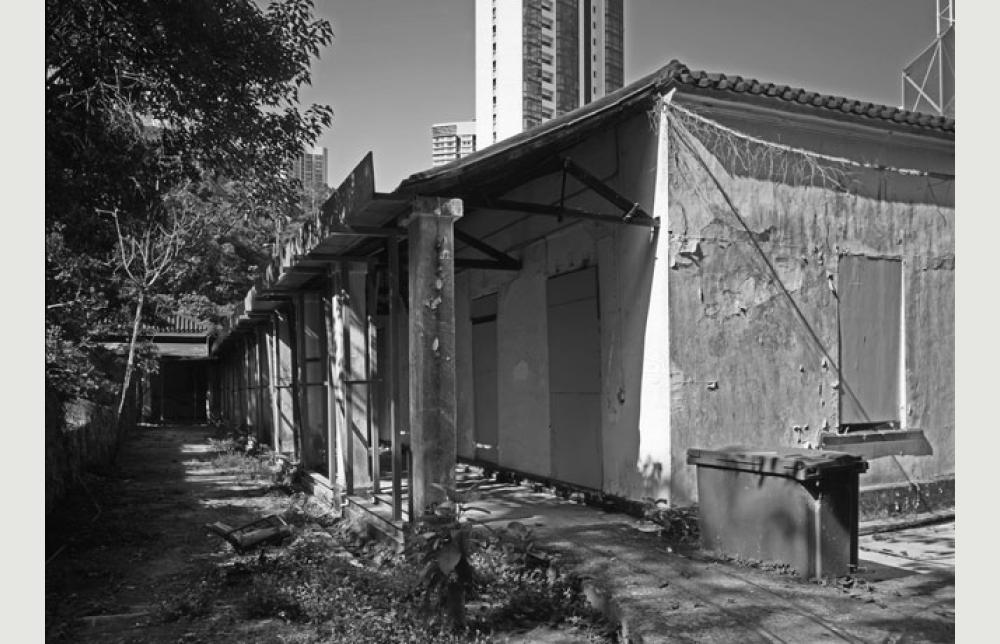 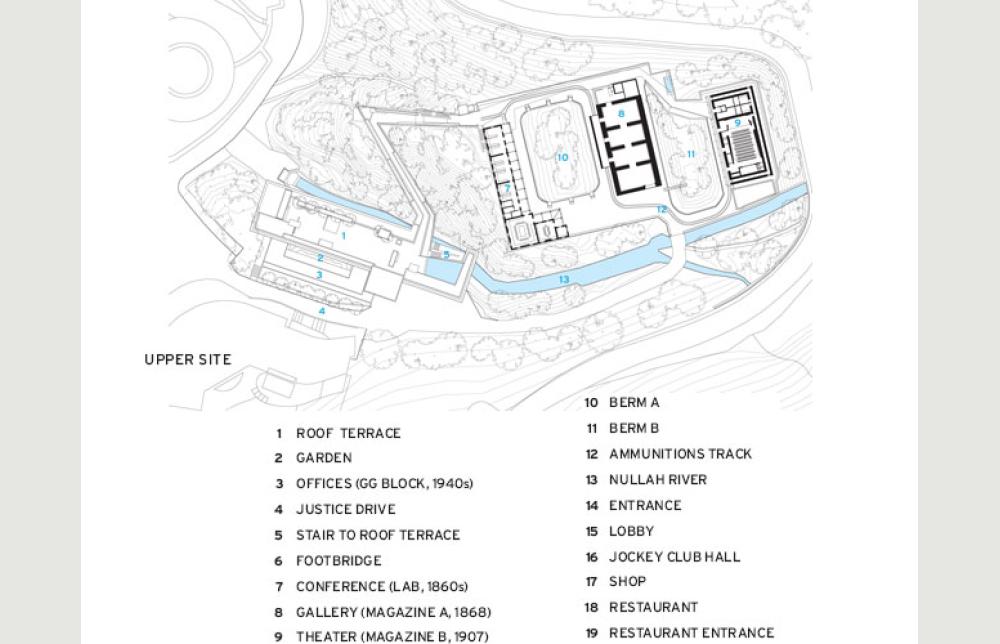 Tod Williams and Billie Tsien have designed for the Asia Society Hong Kong Center, completed in 2012. Their scheme shows the firm’s prowess at blending architecture into the landscape while balancing new construction with renovated historic structures.

Immersed in the lush hills of the Admiralty area of Hong Kong Island, the Asia Society’s new 65,000-square-foot center occupies more than 3 acres of rainforest that had been the Explosives Magazine Compound for the British Army. There, between 1860 and 1907, the colonial rulers had created two ammunition-storage facilities and a munitions lab at the top of the steep site, with earth berms positioned between them in case of explosions. A fourth building, named GG Block, was constructed in the 1940s on the lower part of the hill for the Royal Military Police. By the 1980s the ammunitions complex had been abandoned, and in 1999 the Hong Kong branch of the Asia Society succeeded in leasing the property from the city—which by then had been transferred from British to Chinese rule.

The society, founded in New York in 1956 to foster cultural and business interaction between America and Asia, obtained major funding from the Hong Kong Jockey Club Charities Trust to create a satellite home in this burgeoning metropolis. Its program called for salvaging the munitions buildings on the upper site, in accordance with the recommendation by a landmarks advisory board, although the structures were in a sorry state of disrepair. In addition to making use of 17,000 square feet of these existing spaces for cultural facilities and offices, the society needed a new building for visitors’ orientation, dining, and meetings.

In its winning scheme for the invited competition, Tod Williams Billie Tsien Architects (TWBTA) placed a new 10,170-square-foot main pavilion next to the GG Block, now renovated for offices. The architects then linked this lower portion of the slope to the three existing structures at the top by creating a two-level concrete bridge, reminiscent of Hong Kong’s own elevated walkways. Instead of busy streets, this pedestrian path on Y-shaped supports angles over, around, and through the lush growth to avoid harming fruit bats in the palm trees.

Ultimately the walkway deposits you at the renovated cluster from another era: the former lab from the 1860s, now used for conferences; next, Magazine A, built in 1868 and transformed into a gallery; and finally Magazine B, built in 1907, which the architects converted to a 100-seat theater.

Hong Kong preservation architect Ivan C.C. Ho guided the firm in the finer points of rebuilding the red-tile roofs and reproducing teak doors, window frames, rafters, beams, and joists, as well as restoring masonry- and granite-walled structures. TWBTA’s interventions are discreet and minimal—such as the elegant glass-and-steel entrance to the gallery—and accommodate new uses without irreversible changes to the old structures. It helped that the firm put mechanical equipment underground in the western part of the upper site.

In visiting the center you arrive at the lower site, first passing the GG Block, and then move on to the new main pavilion, a two-level, poured-in-place-concrete structure. There, a grandly proportioned plaza sheathed in a strikingly striated Chinese marble announces the entrance. Beyond the cream-colored and gray stone surfaces of the lobby, you find the majestic Jockey Club Hall. This rectangular multipurpose room seems to float out into the vines and trees, owing to laminated-glass curtain walls, 17 feet high and 110 feet long, on the east and west elevations. Downstairs is the shop and AMMO, a brashly gleaming restaurant designed by Joyce Wang of Wang Design in Hong Kong in a steampunk aesthetic—the only note at the center that is counter to Williams and Tsien’s Zenlike spaces.

The Zen aspect is most apparent when you ascend the outside stairs from the lobby to the roof of the main pavilion. Here an elegantly composed terrace with planting, courtyards, fountains, and seating immerses you in both the city and the jungle. The roof terrace, also lavishly surfaced in green Chinese marble, connects you to the upper level of the walkway along the east side for your jaunt to the upper site.

The project’s cascading-down-the-slope configuration means that its most visible element is actually the pedestrian bridge and the roof terrace of the pavilion. Indeed, the only overall view of the Asia Society center is an aerial one, which a cluster of nearby skyscrapers can provide. As Tsien puts it, “This is a horizontal building in a vertical city.”

A year after the $51.5 million complex opened, Alice Mong, executive director of the Asia Society Hong Kong, notes that the center “has been a big hit with the community”—although the staff already needs more room. This oasis in the middle of a bustling city offers a feeling of tranquility desperately desired and surprising to find. And in doing so, it transports you through time and space, between old and new architecture.