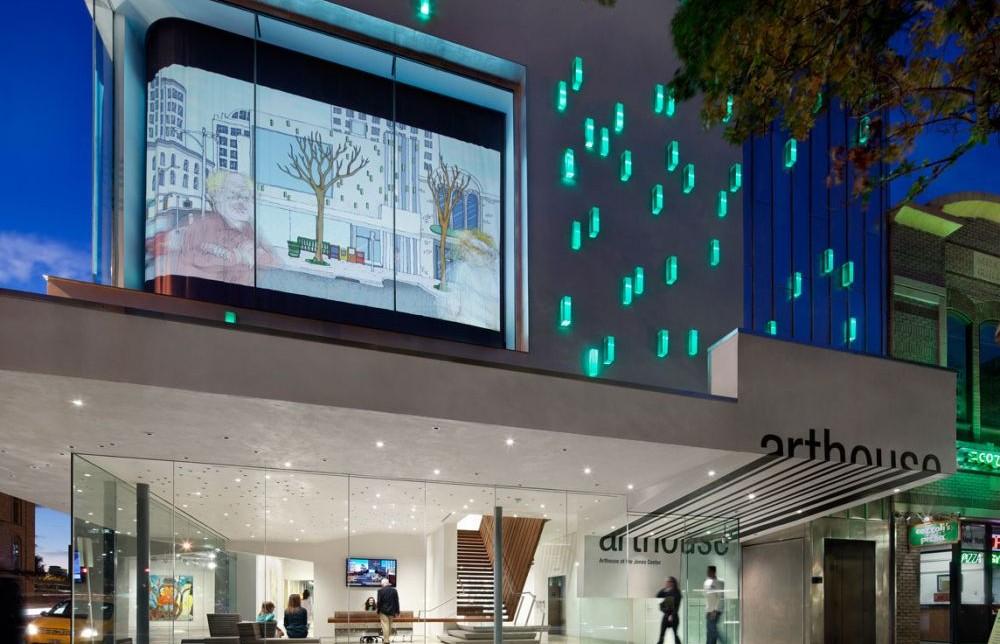 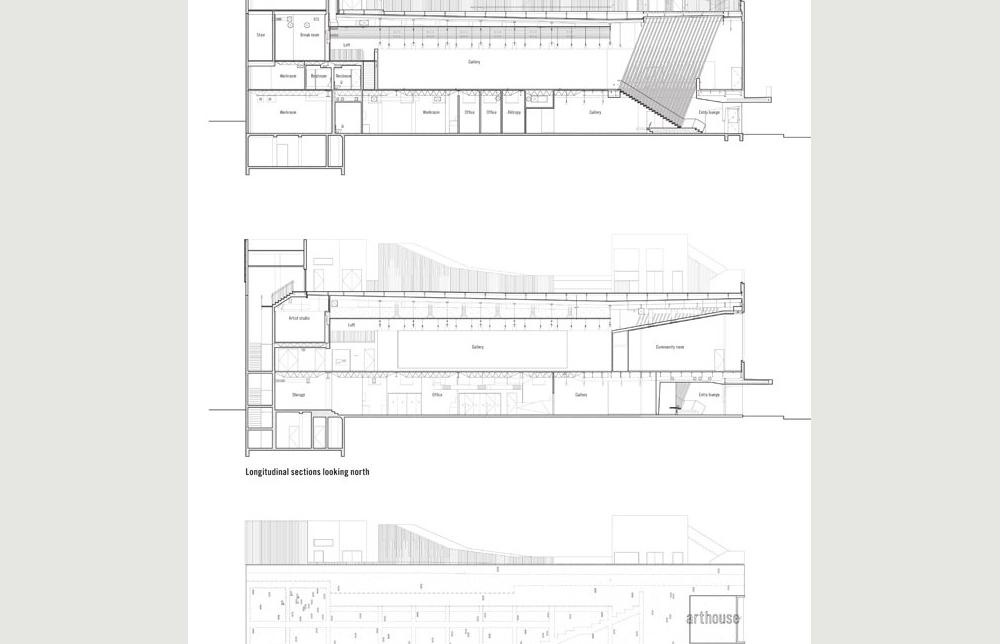 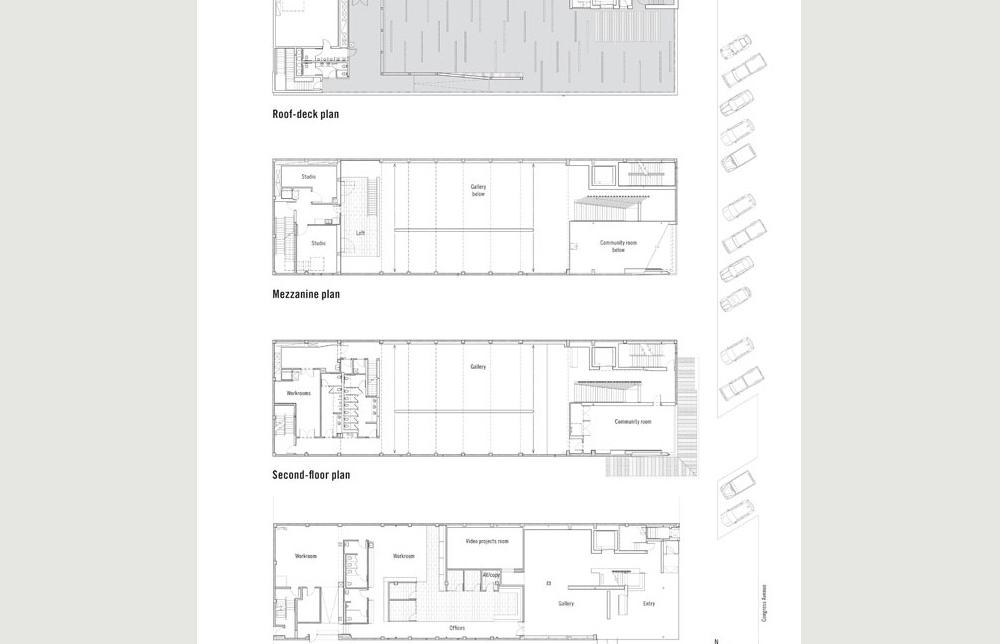 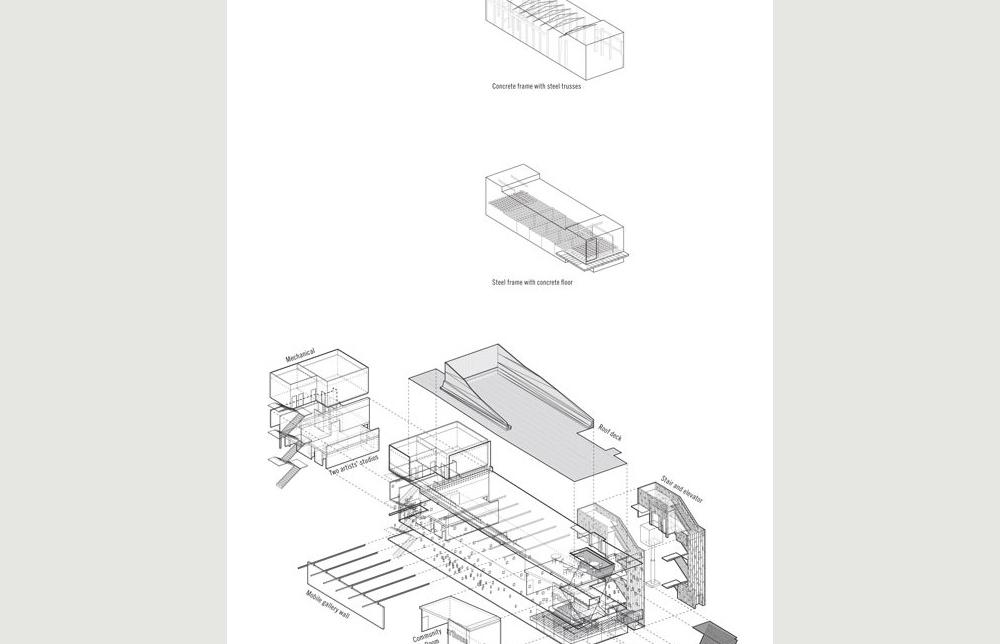 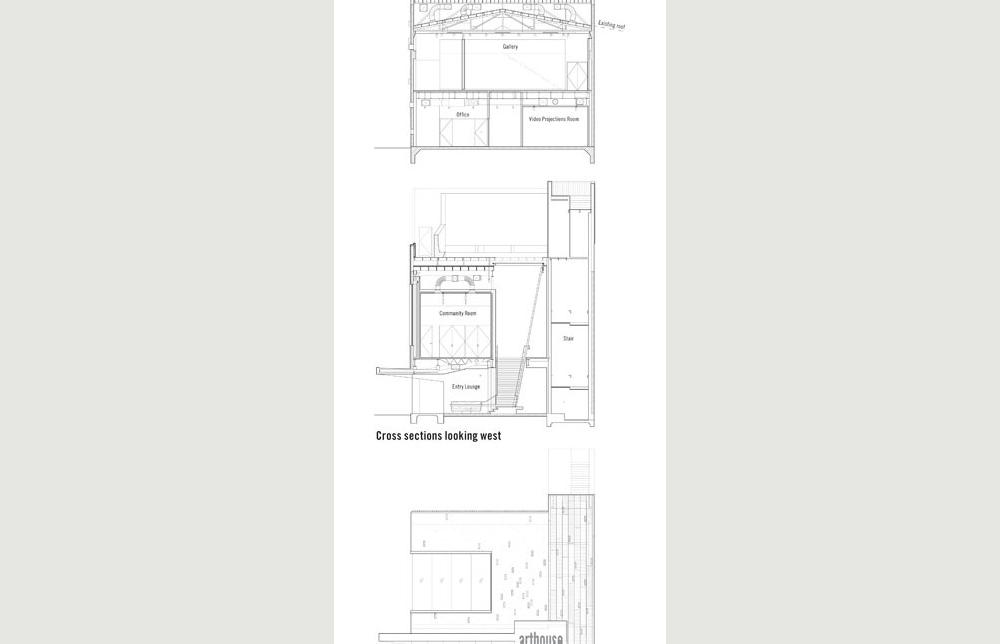 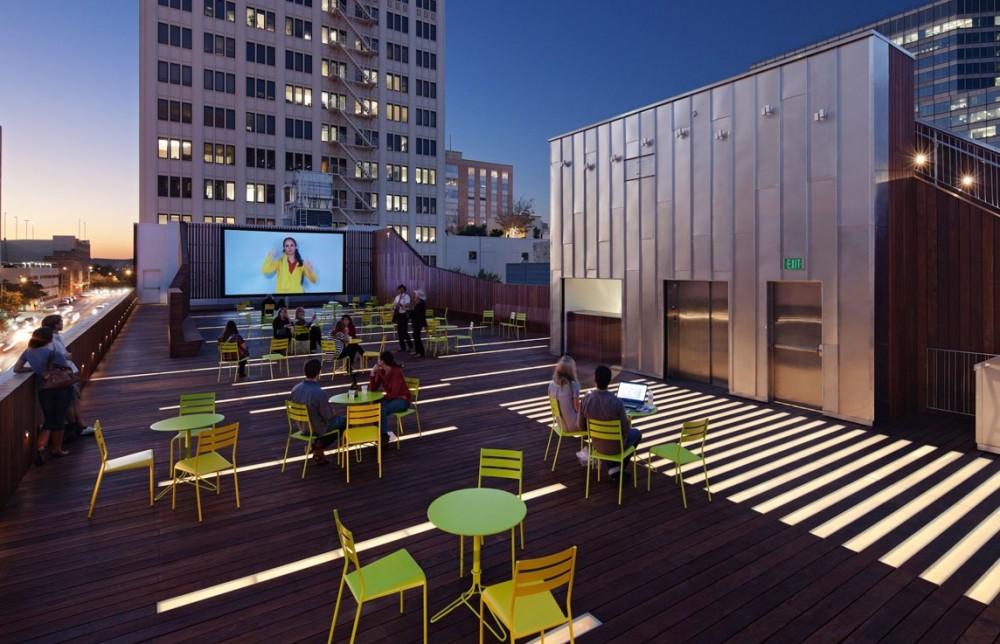 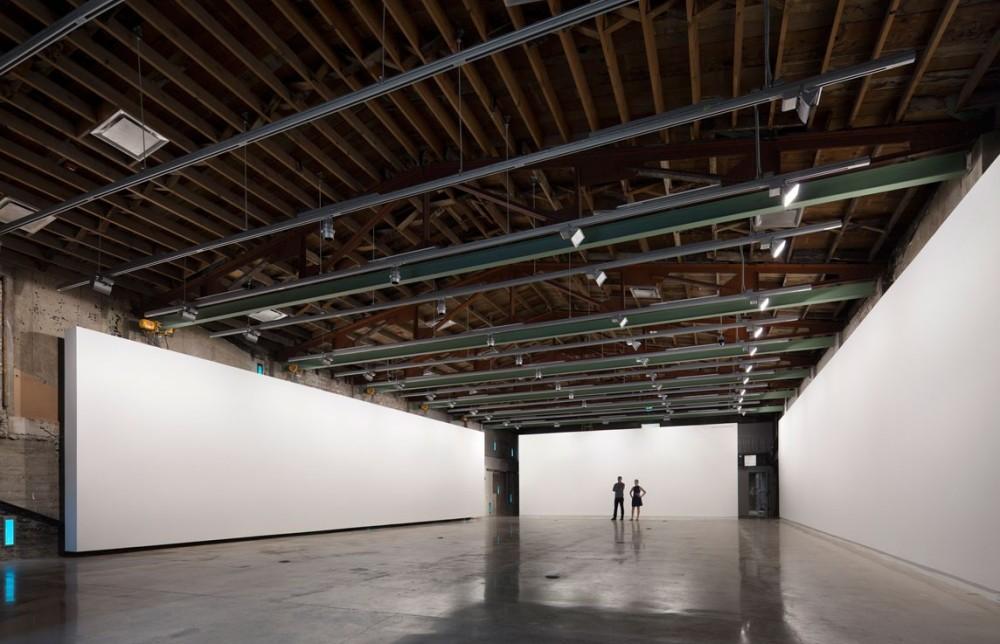 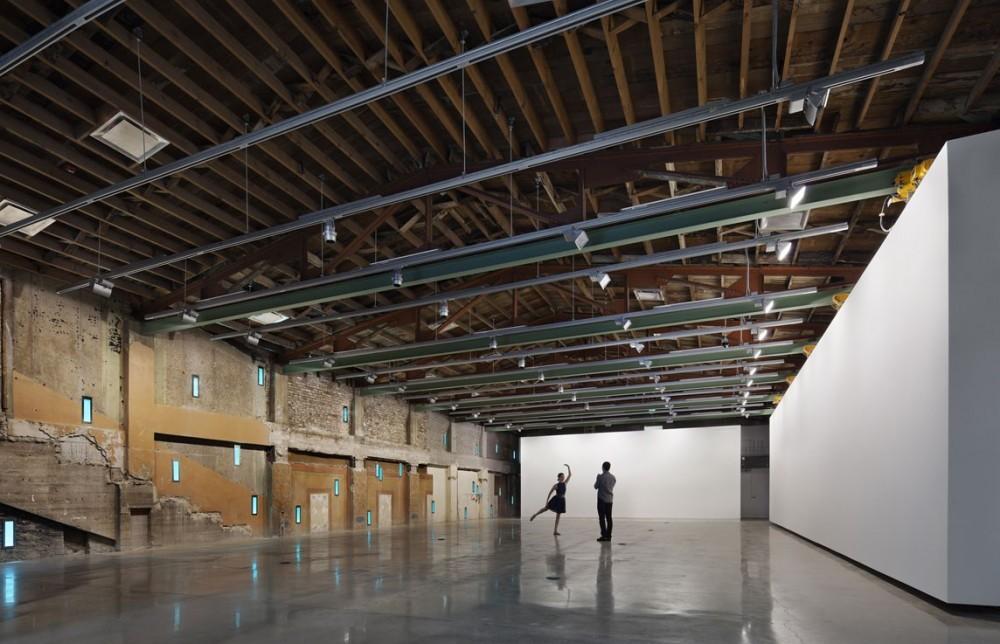 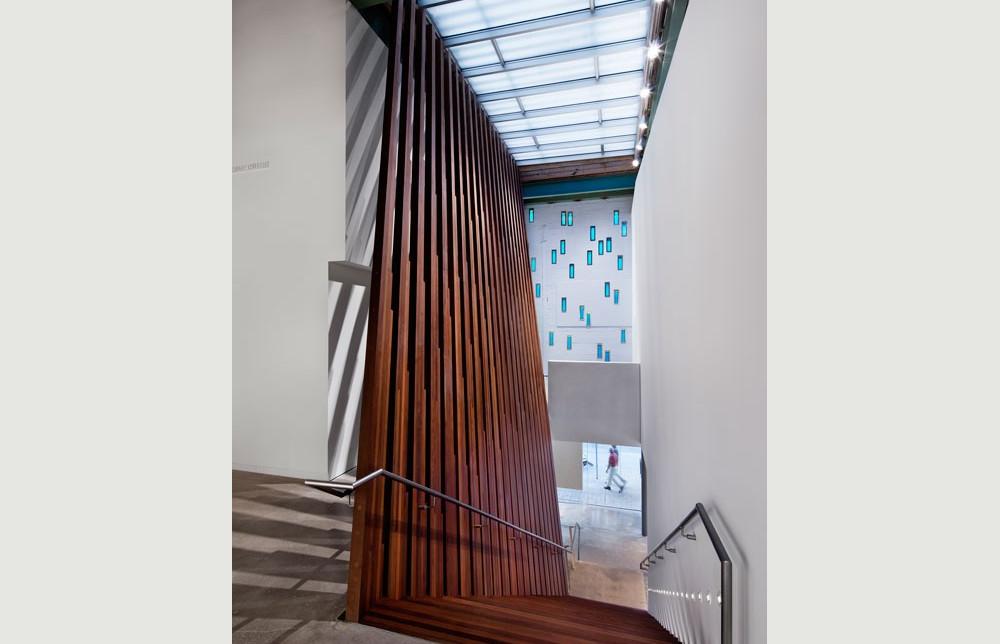 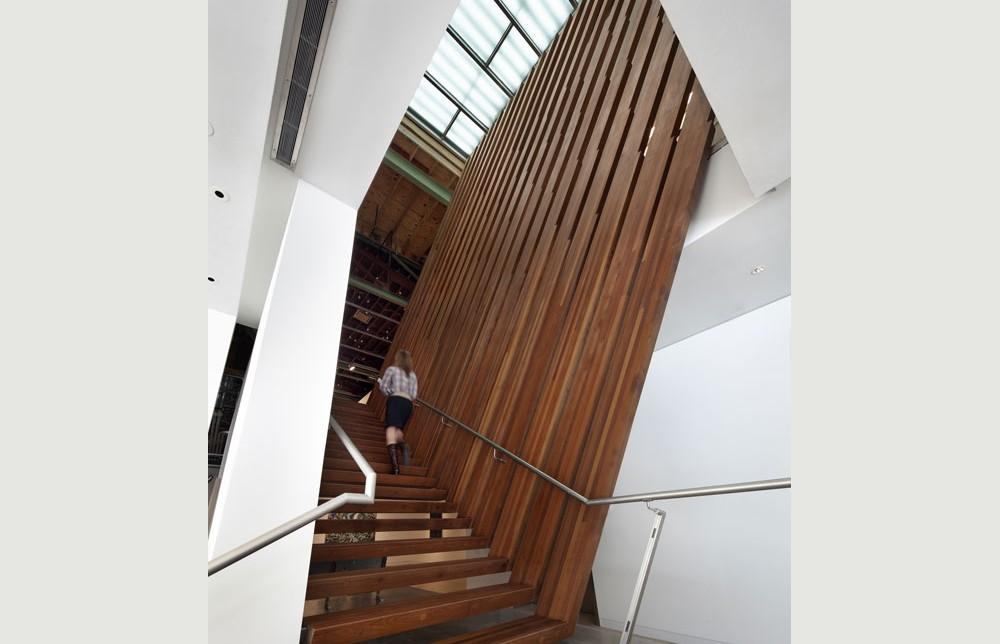 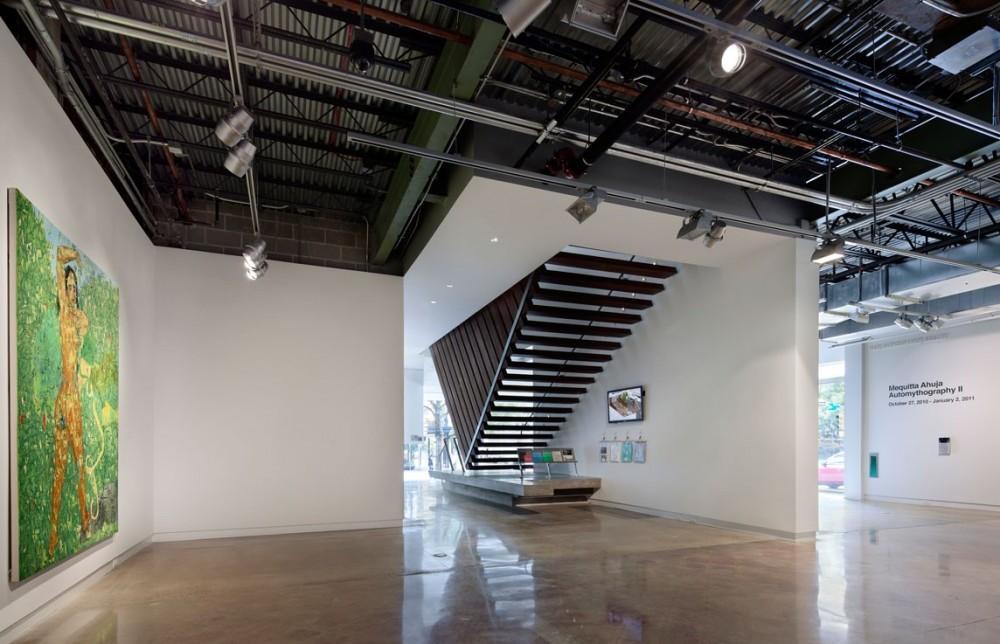 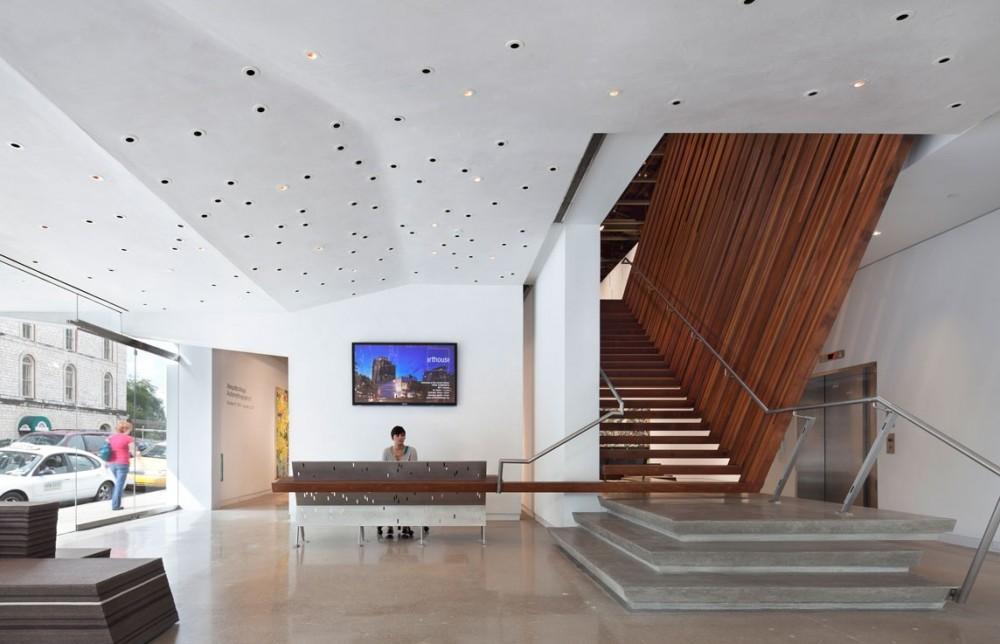 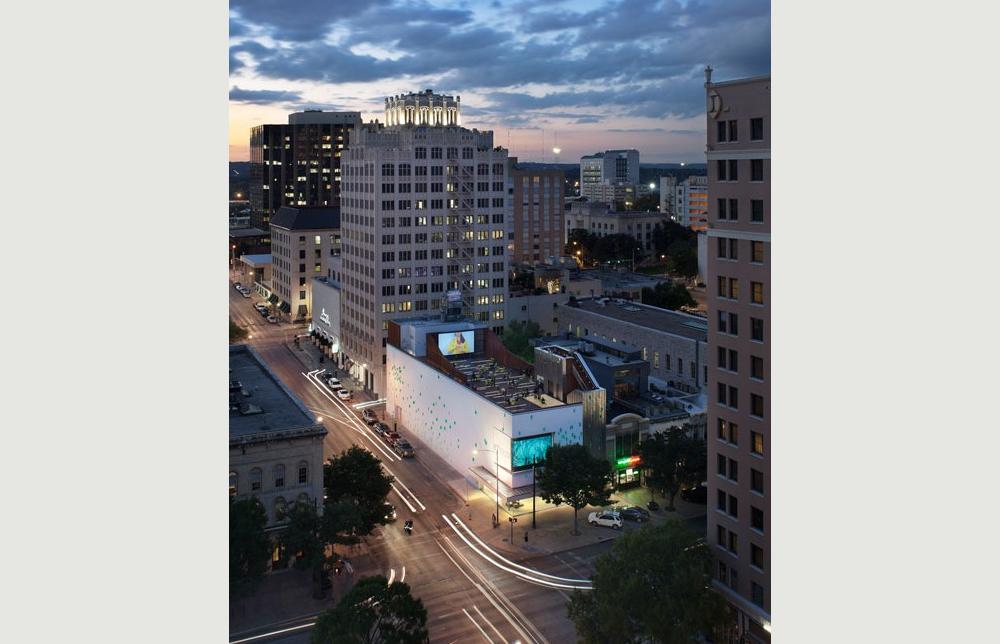 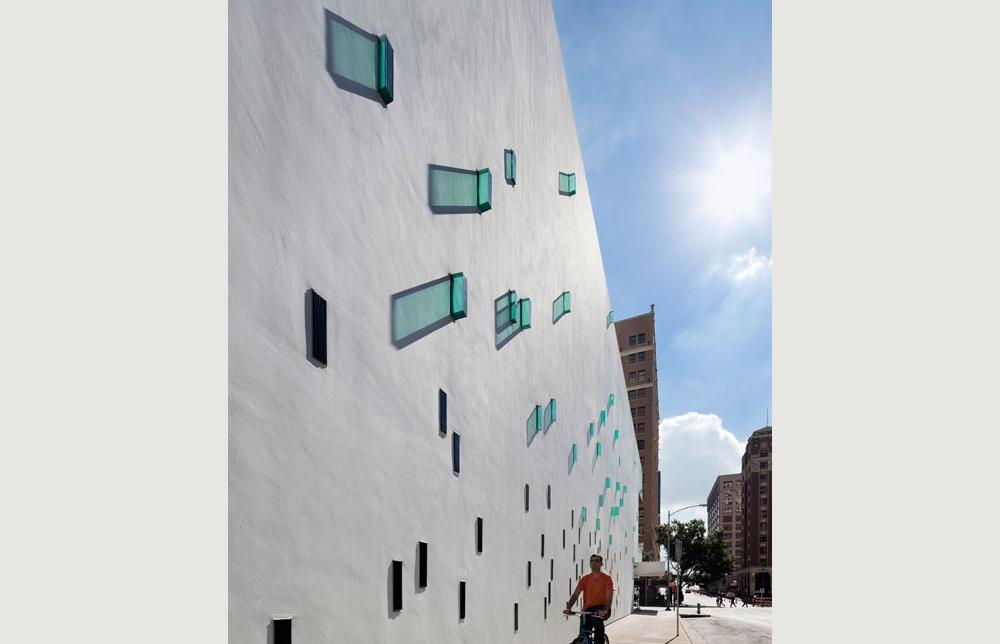 Renovations of century-old buildings of architectural merit often attempt to reconstitute particular moments of history. For this contemporary art space, however, LTL embraced the trajectory of the existing construction’s transformation, rather than returning it to a moment frozen in time. Located in the heart of downtown Austin, Arthouse is a renovation of a 1920s theater that was later modified as a department store in the 1950s. During the midcentury conversion, the building’s open structure, consisting of a concrete frame with steel trusses, was altered to include a single-story, steel-supported concrete deck. This second-floor addition cut in half the theater’s large proscenium space. Adding 14,000 square feet of new program to the existing art space, LTL intensified this peculiar accumulation of history by conceiving of the design as a series of further tactical additions and adjustments. These supplements revive and augment extant features—such as the trusses, concrete frame, and ornamental interior frescos from the 1920s, as well as the awning, storefront, and upper-level display window from the 1950s. The building’s envelope intensifies exchanges between the city and Arthouse. The entry lounge is wrapped in glass, maximizing sidewalk exposure and allowing glimpses into both floors of galleries. The 1950s awning is functionally enhanced by not only creating shade and capturing sidewalk territory outside, but also extending into the building. Here, vertical tabs added at the entry provide the surface for the sheared sign, inviting visitors to enter Arthouse through its name. The large opening of the second floor community room doubles as a projection screen visible from the street at night. The majority of the existing building’s elevations lacked windows, as a theater and a department store do not require natural light. Similarly, gallery spaces demand few windows. Therefore, a new form of aperture, based on accumulation and density, was developed to unify the building and create a logical yet unconventional facade appropriate for an experimental art venue. The southern and eastern elevations are perforated by 177 glass blocks, which are lodged in the existing masonry. The quantity of perforations is increased where more light is needed—offices, studios, meeting rooms—and decreased where light is less desired, as in the galleries and lecture room. Set within the infill of the concrete frame, the density and locations of the blocks telegraph the structure and program of the building through its skin. During the day, luminous shadows cast by the cantilevered blocks animate the exterior stucco surface, while at night individually programmable LED lights illuminate the blocks from within the wall thickness. Inside, the blocks augment the existing theater frescos and remaining traces of the department store, adding a new bespoke layer to the accumulated surface. The central stair provides the primary spatial connection between the entry lobby and the second-floor gallery. Its lower three treads are cast-in-place concrete while the upper twenty-one ipe treads are suspended from above, connected visually and physically to a skylight in the roof deck. The first wood tread is elongated into the reception desk, while the concrete base is extended to offer an area for sitting. The staircase is both playful and grand, floating and grounded, expansive and local. Ranging in length from twenty-five to thirty-eight feet, the stair treads were fabricated off site and individually mounted in the floor cavity. Given this size and complexity, the staircase was installed prior to the construction of walls on the upper floor. The horizontal treads are composed of glue-laminated ipe strips, each forming a rhombus in section in order to dovetail into the inclined vertical. This joint is reinforced by embedding steel within the laminations. The stair is inclined in two axes, toward the north and east. The angle of the slope is derived from the geometry of the stair nosing, thereby using the logic of a minor detail to inform the overall form. At any horizontal cut, the volume of the staircase is a rectangle. Yet, due to the inclined verticals, the stair is five feet wide at the lowest tread and seven feet wide at the top. The stair expands as one ascends from the street level to the main second-floor gallery, where the street remains visible from the top of the staircase. In the main gallery, a thirteen-foot-high by fifty-five-foot-long wall is suspended from I-beams that were required to stiffen the bottom chords of the existing steel trusses. Using motorized trollies, the gallery can be quickly reconfigured from a single space that reveals the textured southern wall to a more conventional white wall gallery. Alternatively, the wall can be used to split the gallery into two, or to form a constricted tunnel-like space adjacent to one of the exterior walls. The roof deck is constructed as a large, integrated piece of millwork, with benches that morph into a vertical enclosure, defining a space for gathering. The deck can host a range of events, from outdoor film screening and music performances to informal dinners and formal weddings, all outside yet embedded within the heart of downtown Austin. The entire building is designed for maximum programmatic flexibility. Moreover, the building accommodates a range of densities of use, from a single visitor engaged with the art, to crowds watching films on the rooftop, gathering for an opening in the second-floor gallery, or dancing in the entry lobby, enticing the curiosity of sidewalk passersby.