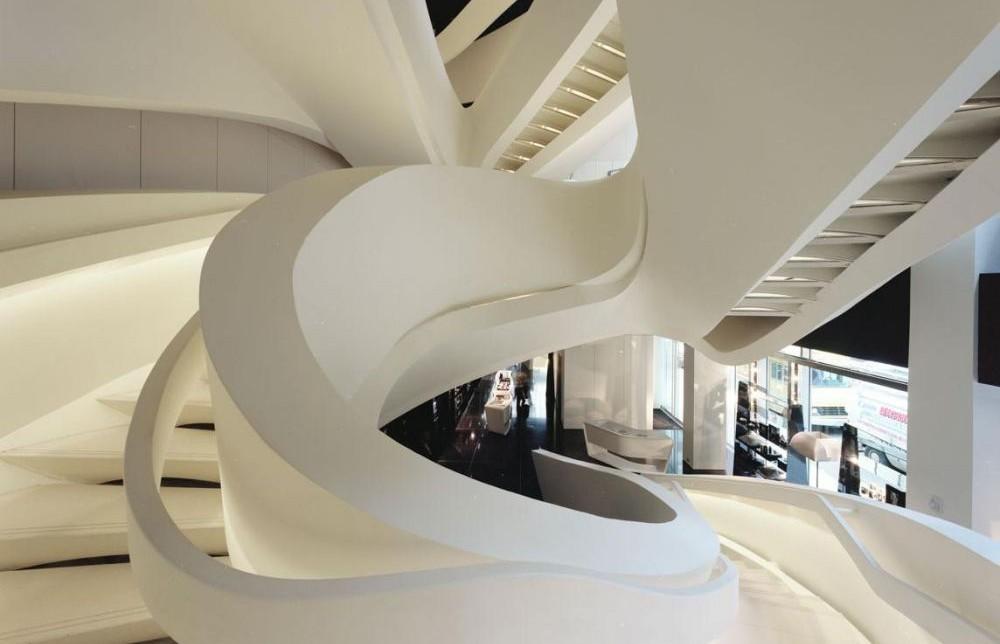 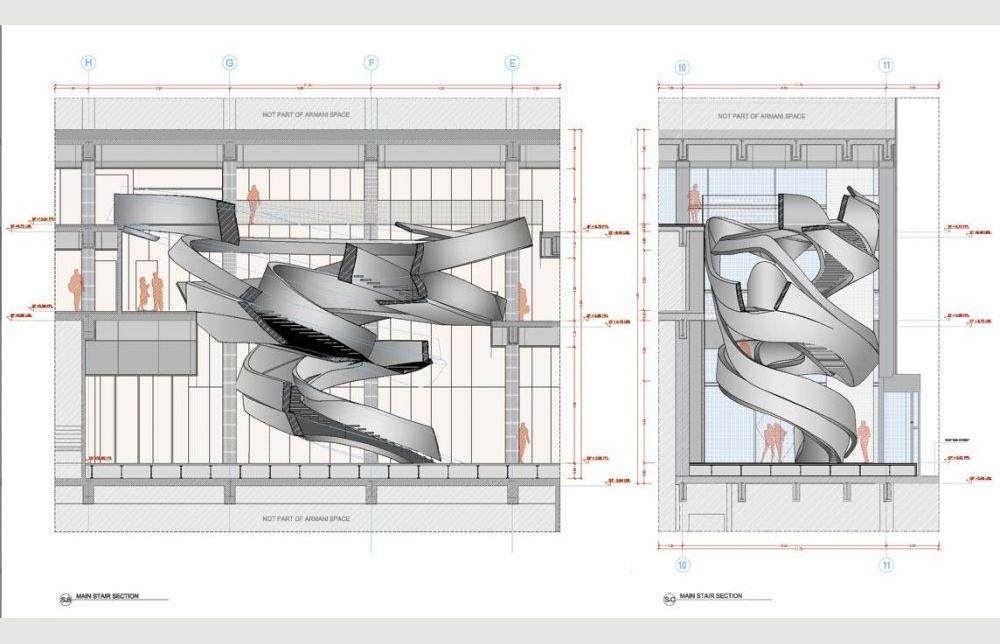 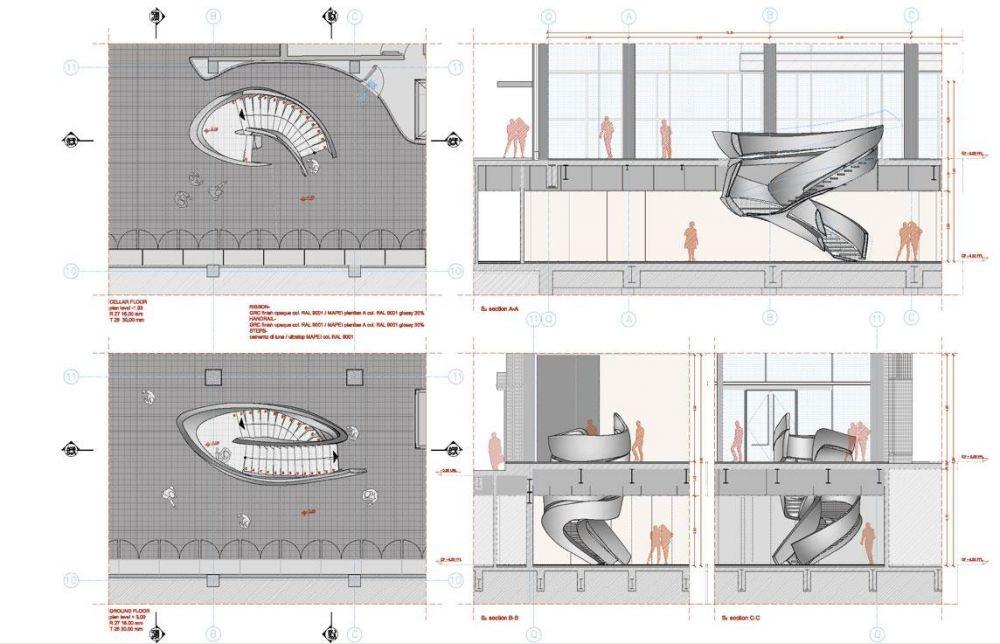 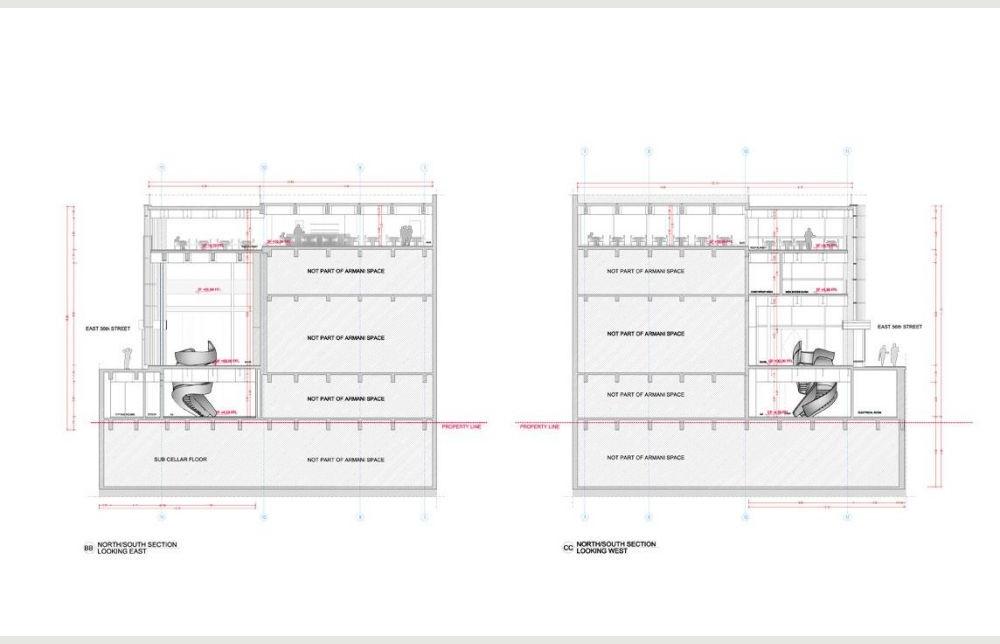 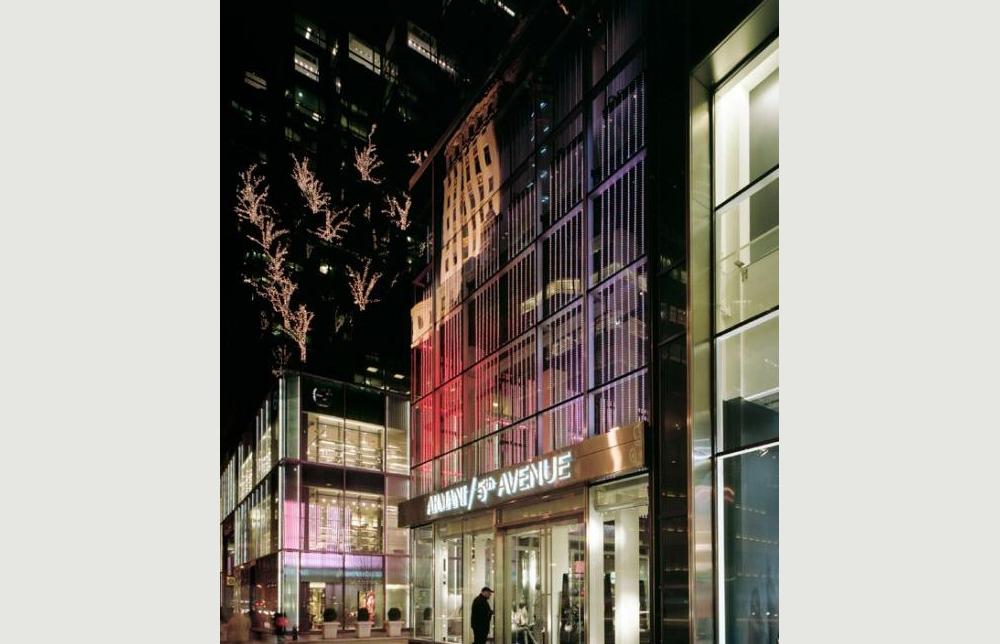 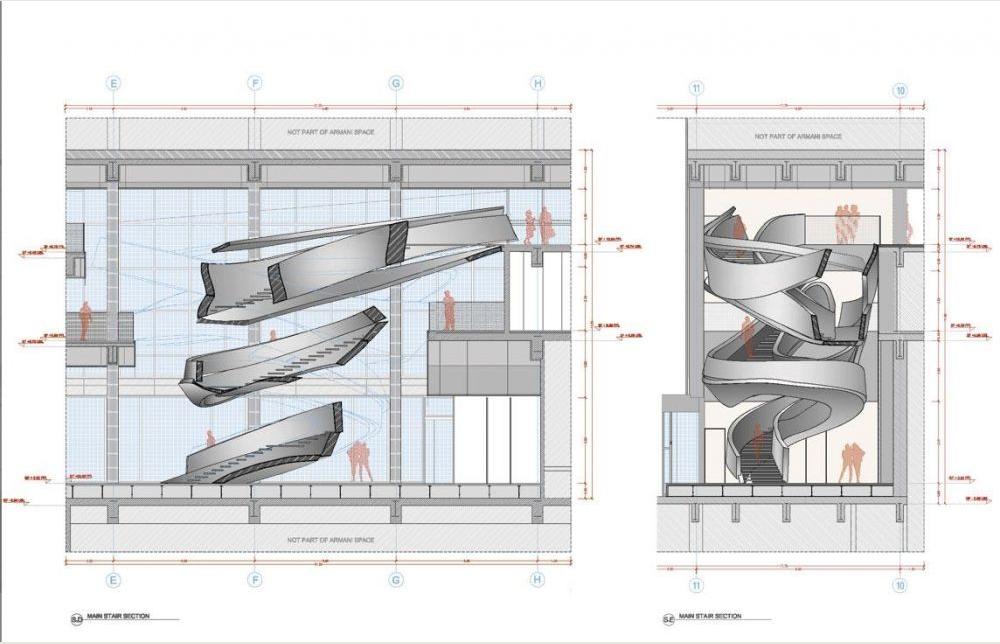 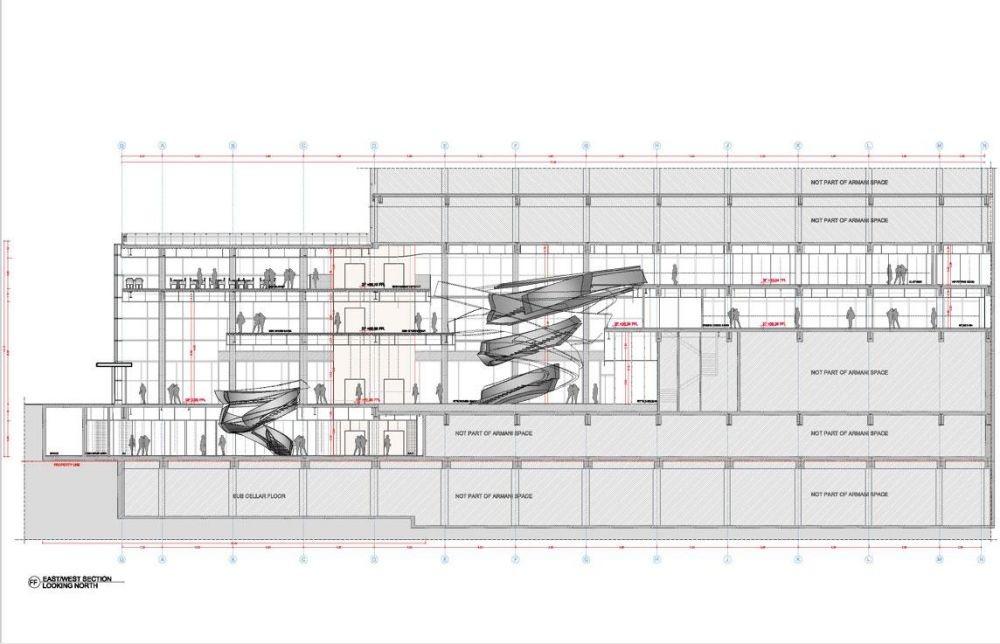 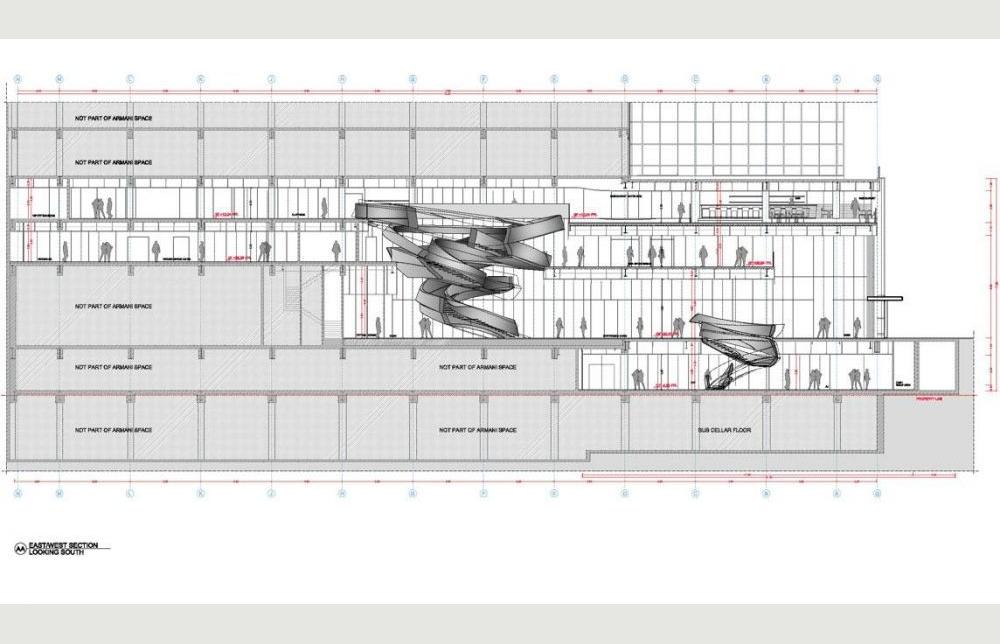 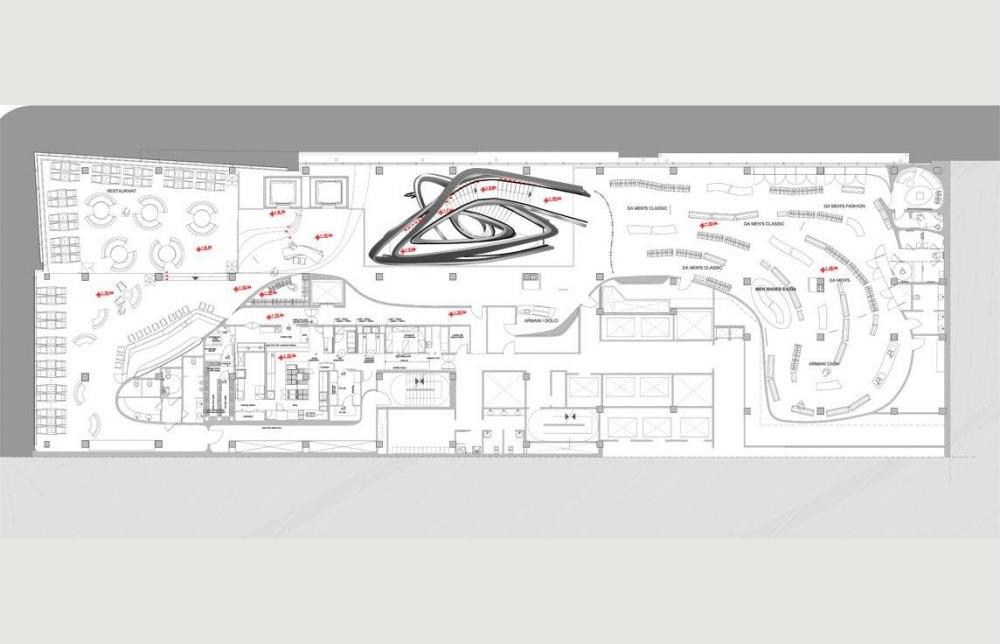 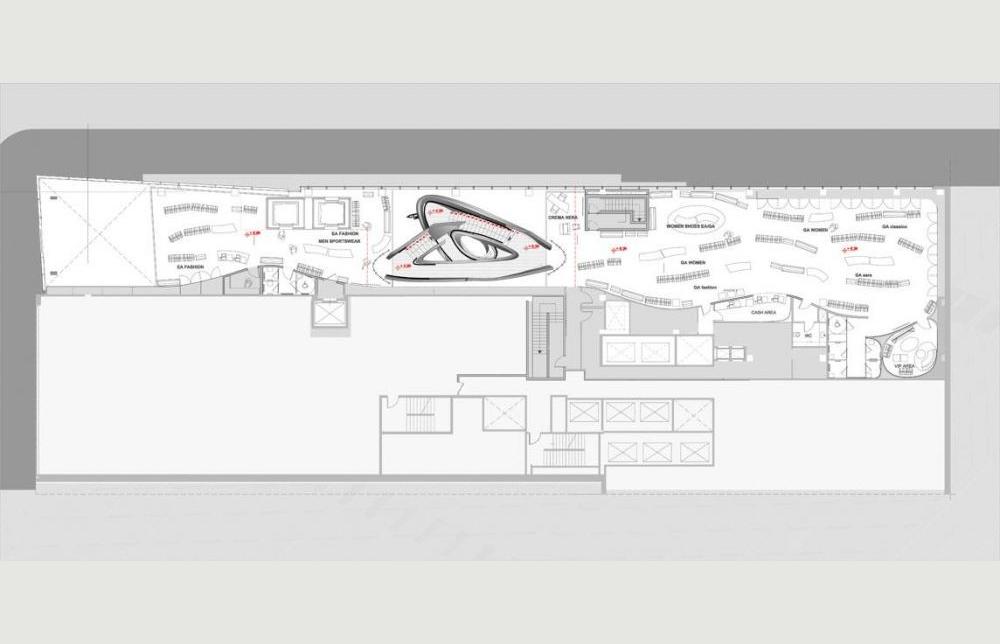 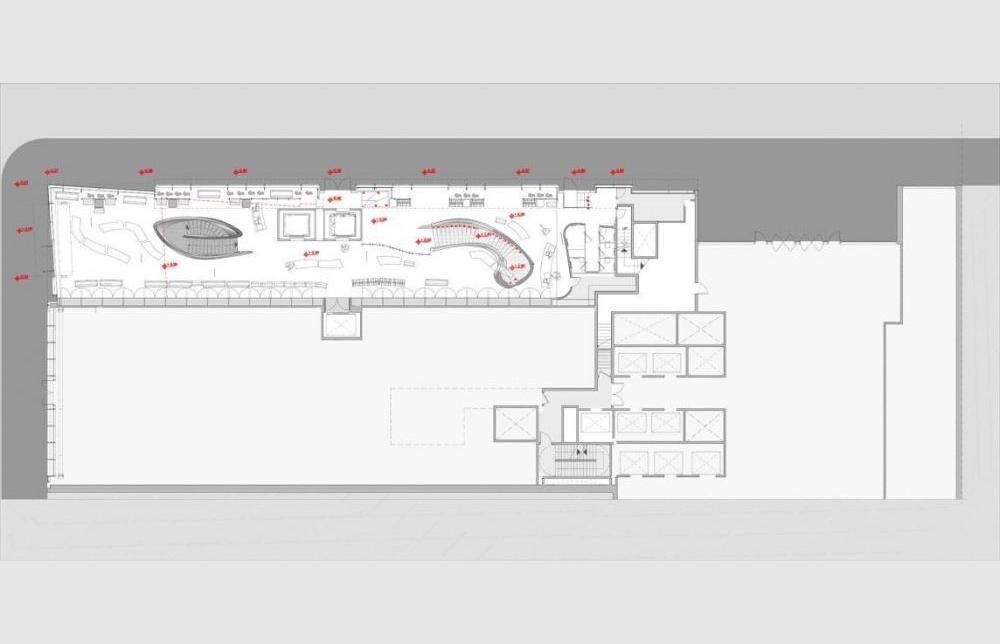 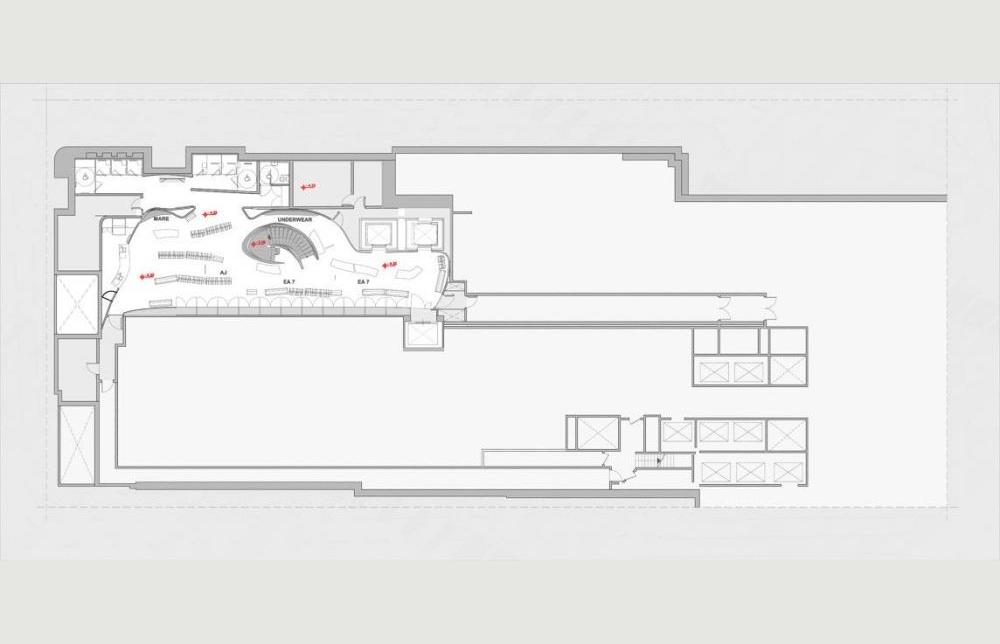 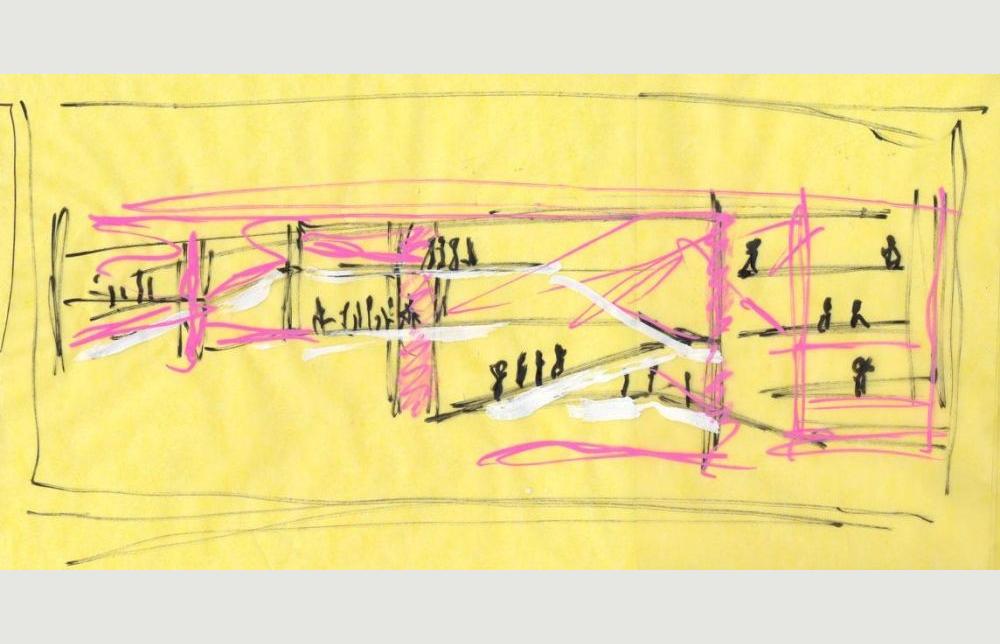 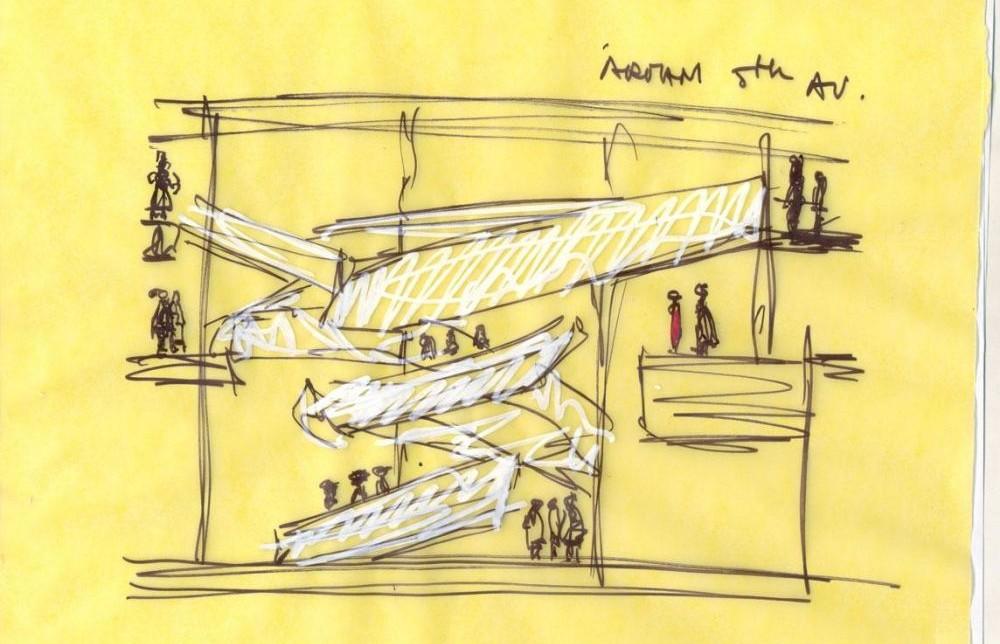 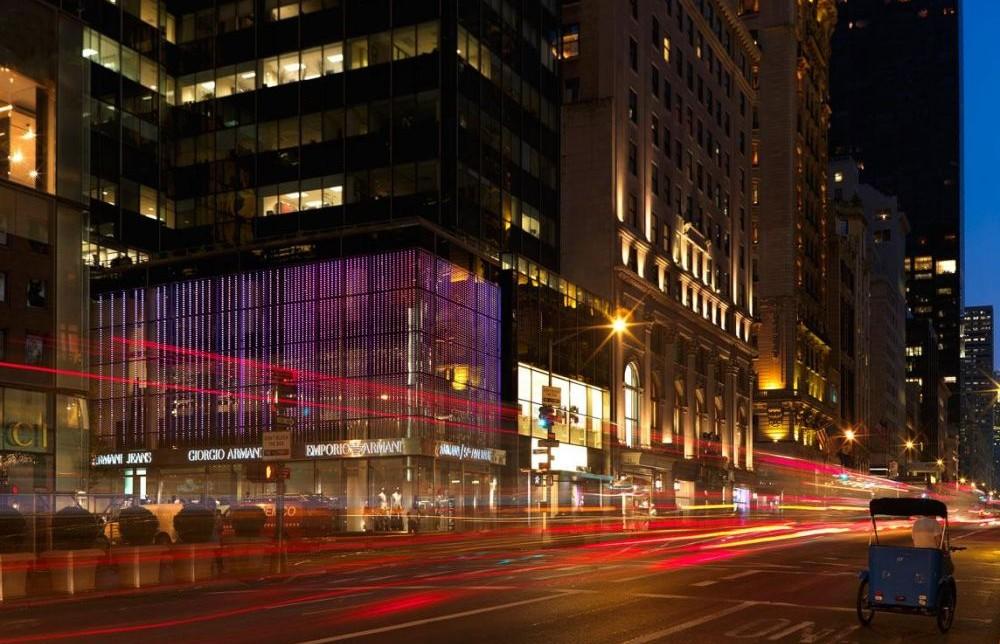 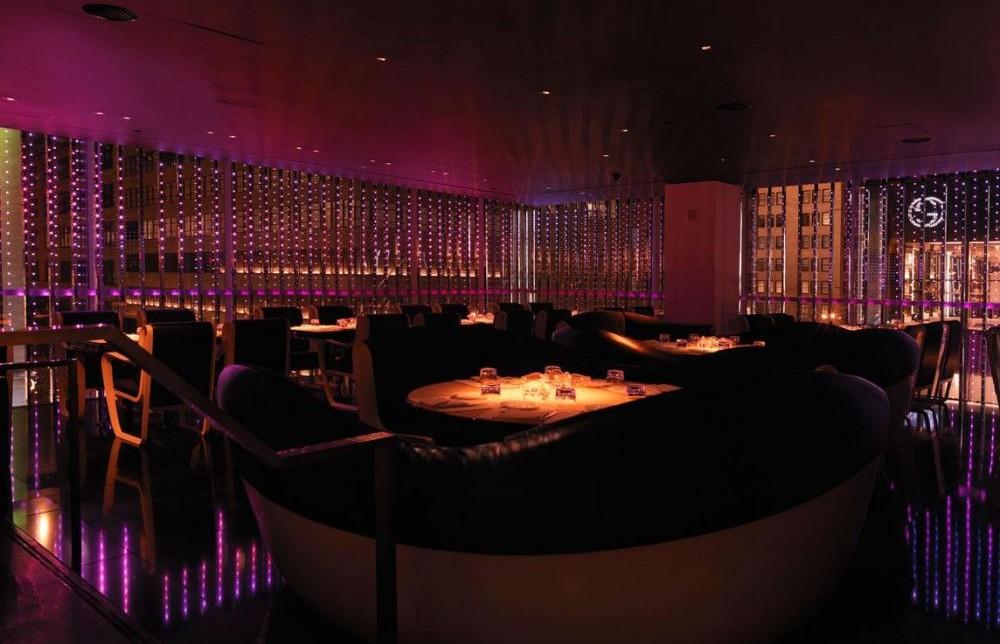 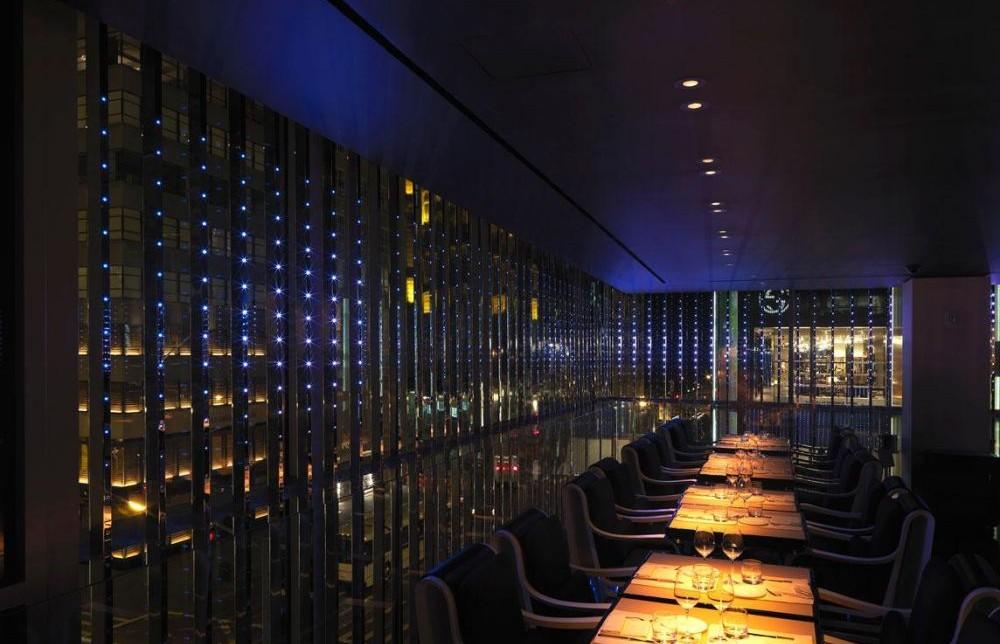 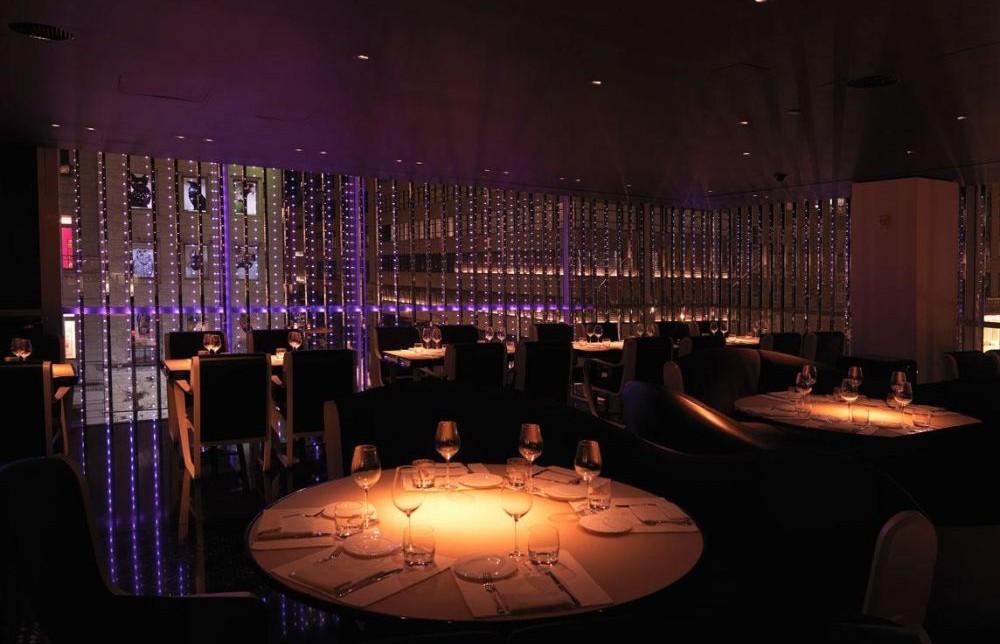 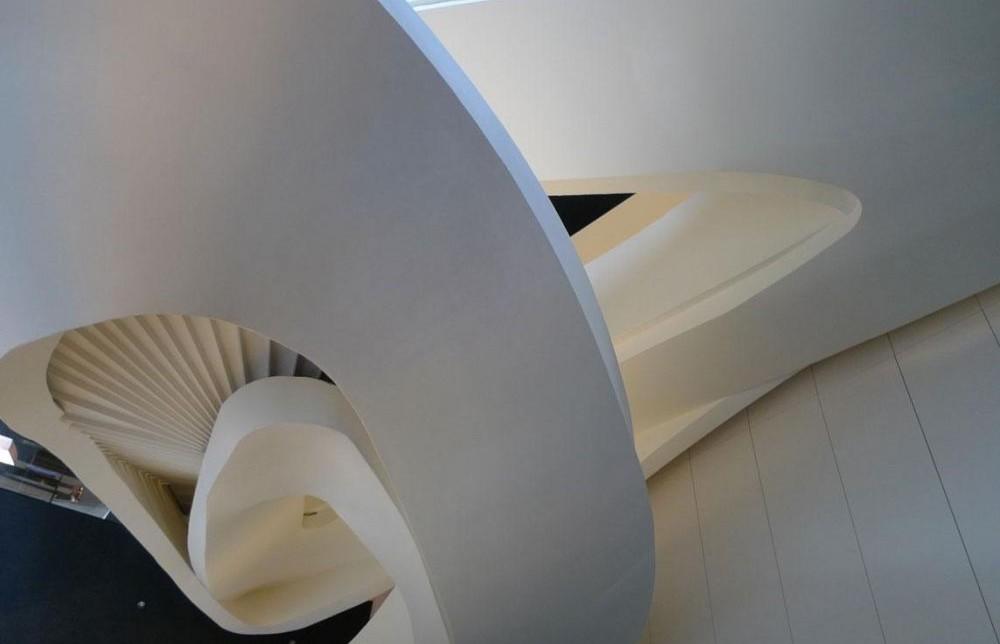 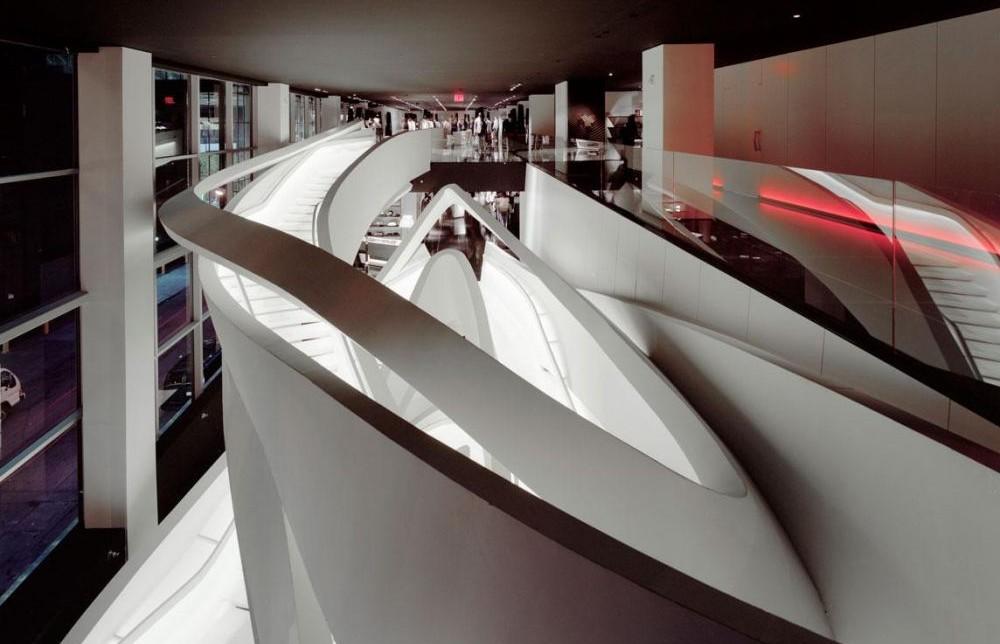 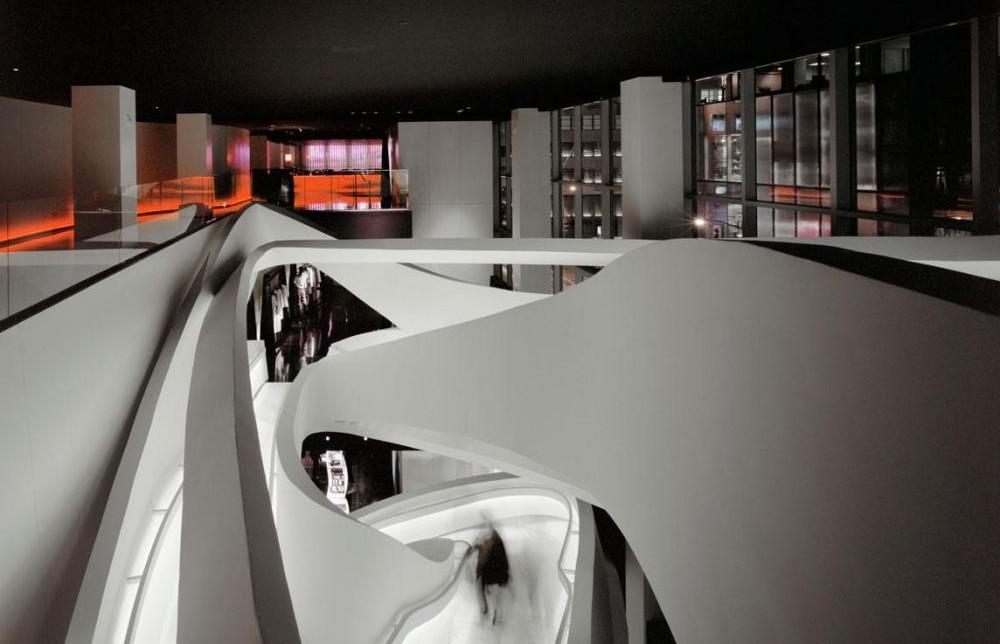 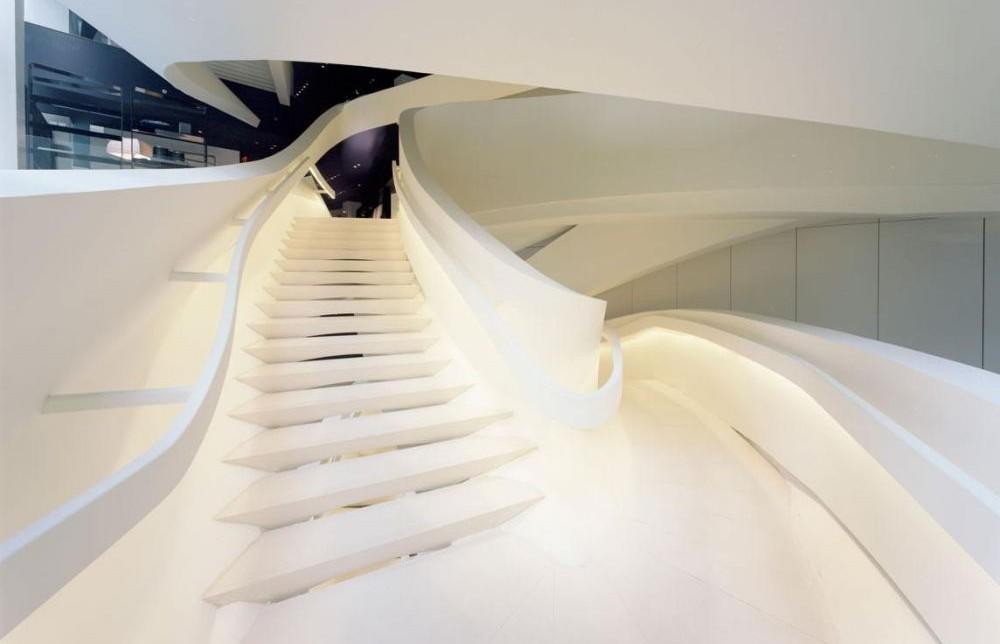 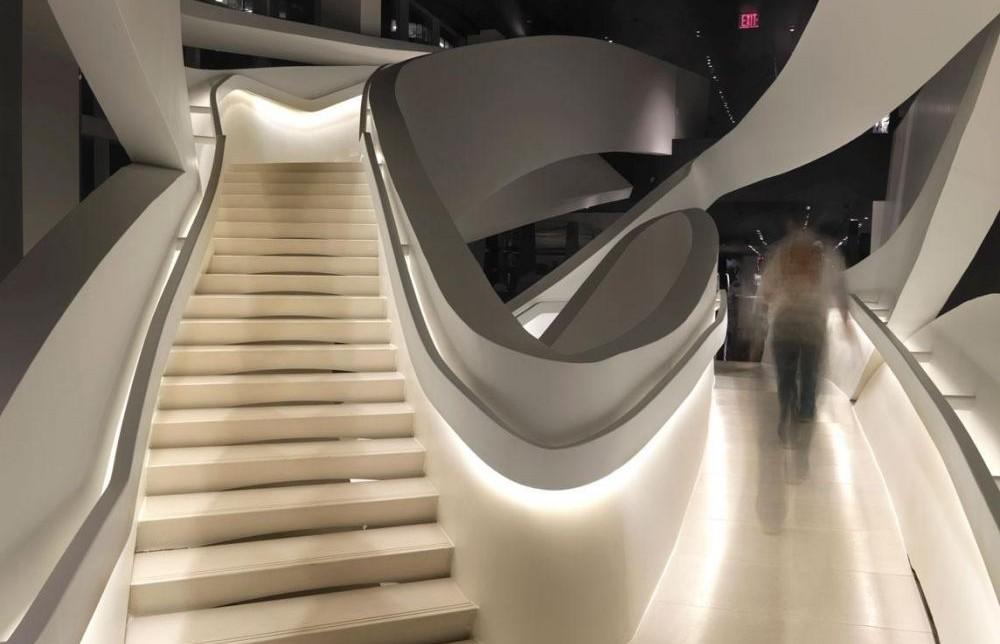 After Hong Kong Chater House and Tokyo Ginza Tower, Fifth Avenue completes the trilogy of the Armani Stores designed by Doriana and Massimiliano Fuksas for the famous designer.

Situated in the centre of New York, in one of the world’s well known streets, the project takes up the first three floors of the two buildings located between 5th Avenue and 56th Street.

Besides the basement, the showroom develops on four different levels and it is conceived as a single space, without clear distinctions, a space in harmony connected with the power generated by the vortex that is the staircase.

The heart of the building is, in fact, epitomized by the staircase. Structure in rolled calendar steel (made in Italy) and cladded in a plastic layer that highlights its exceptional sculptural presence. It is an entity that is almost impossible to convey in terms of any normal geometric shape that originates from a vortex with great dynamism, surrounded by the different levels that accommodate the Armani world.

The movement of the ribbons that constitutes the staircase, skimming each floor, disenchants the possibility to recognize the geometry.

The general layout of every floor develops according to the different flexures of the ribbons, creating a space controlled by the vortex.

No element is extraneous to the internal dynamism, not even the external façade; even if it is lined up to the rigid orthogonal stitch of Manhattan, simulating the movement through images and shades, projected on a set of LED threads. This screen, besides being the projection to the outside of the internal space, is also a particular tribute to New York City, the inescapable necessity to compare its modernity and its dynamism.

The fluidity of the internal space is rendered by the wall of continuous threads, that are realized with lacquered wood panels.

The different rays of bends that outline the threads transform into the spaces and handles for the different product areas. The folding of the threads give hospitality to the dressing-rooms and the VIP hall, also transforming into areas reserved for staff, cash desks, or special product areas such as Armani Dolci. A particular importance is given by the enlightenment that defines, characterizes and emphasizes the bends of the walls and of the spaces, highlighting the different functions of the general layout.

Every element of the internal design, from the shop floors to the storage, from the desks to the armchairs, follows and satisfies the movement concept generated by the staircase, becoming a part of the same vortex. The disposition and the route that it implies outlines the harmonic layout.

There is a confliction between the shine of the walls and of the furnishings and the noir of the marble and of the ceiling. Therefore emphasizing the areas that are there for interaction.

There is also a confliction between the apparent simplicity of the internal space and the cafe/restaurant giving an advanced notice of the elevator’s entrance. The refolded

bronze that covers them, acquires and reflects the colours and the shades giving a glimpse of the new atmosphere. From the restaurant, filtered by an amber veil, there is a splendid view of 5th Avenue and the end of Central Park.

The colours and the materials utilized are the same as the rest of the showroom, but the suggestions are new and different. The space becomes recreational, a line of light on the floor that leads to the entrance of the restaurant, underlining the sensuality of the bends of the wall.

A virtual curtain activates the passage and, just like a theatre, …the show begins!