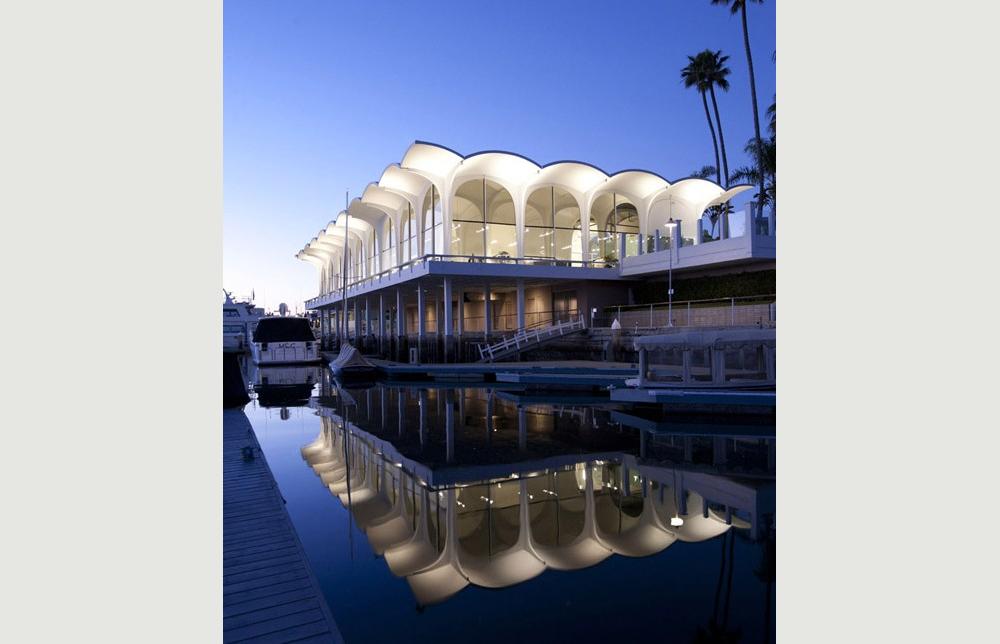 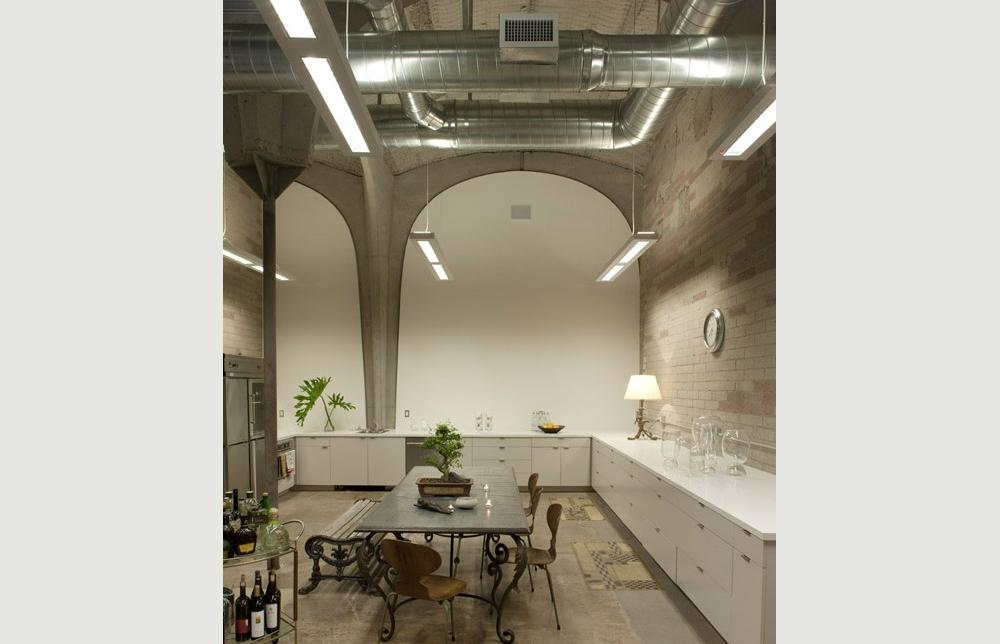 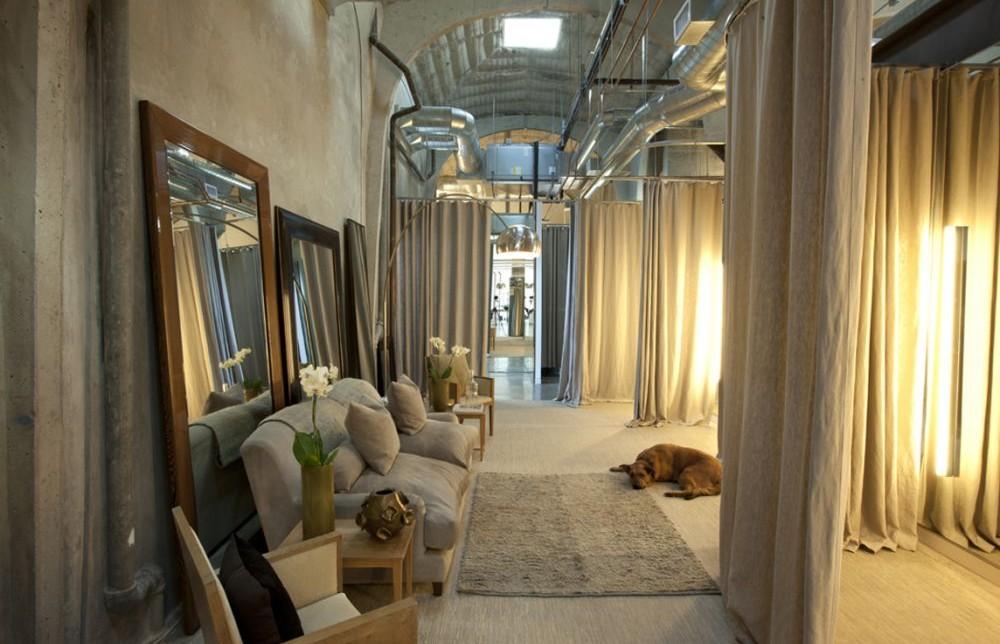 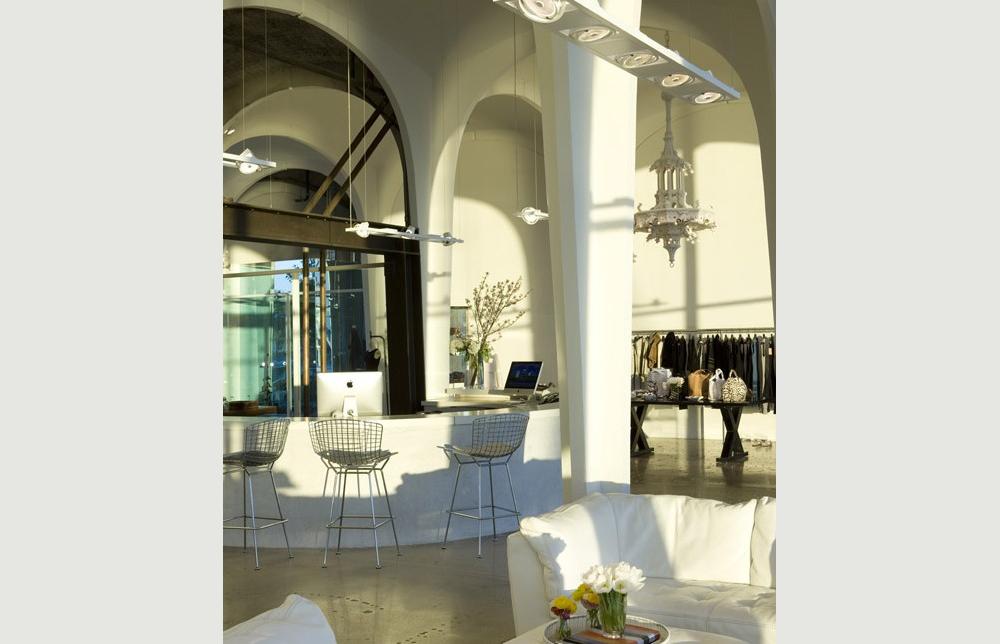 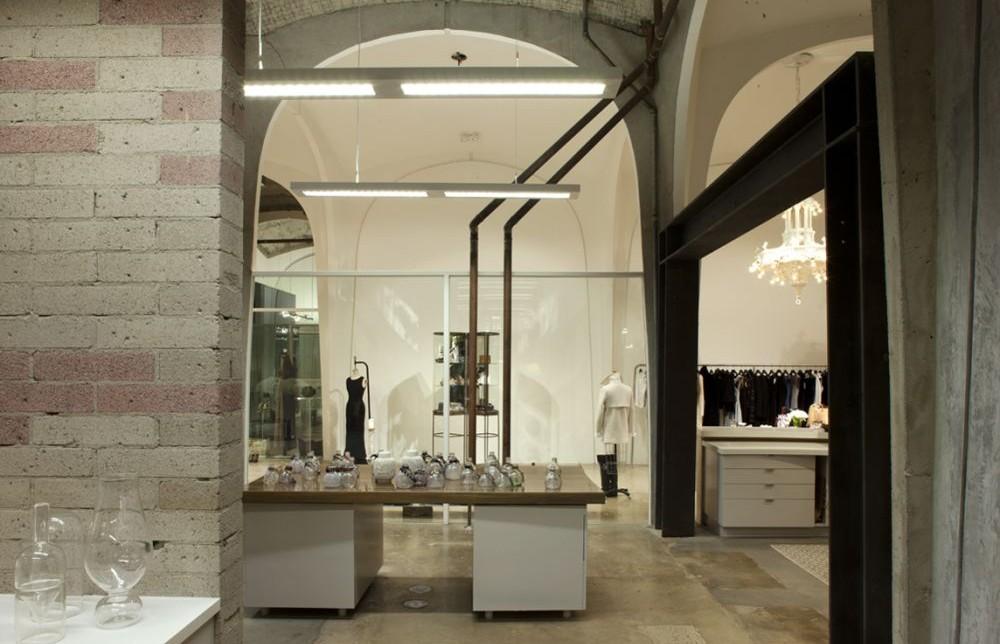 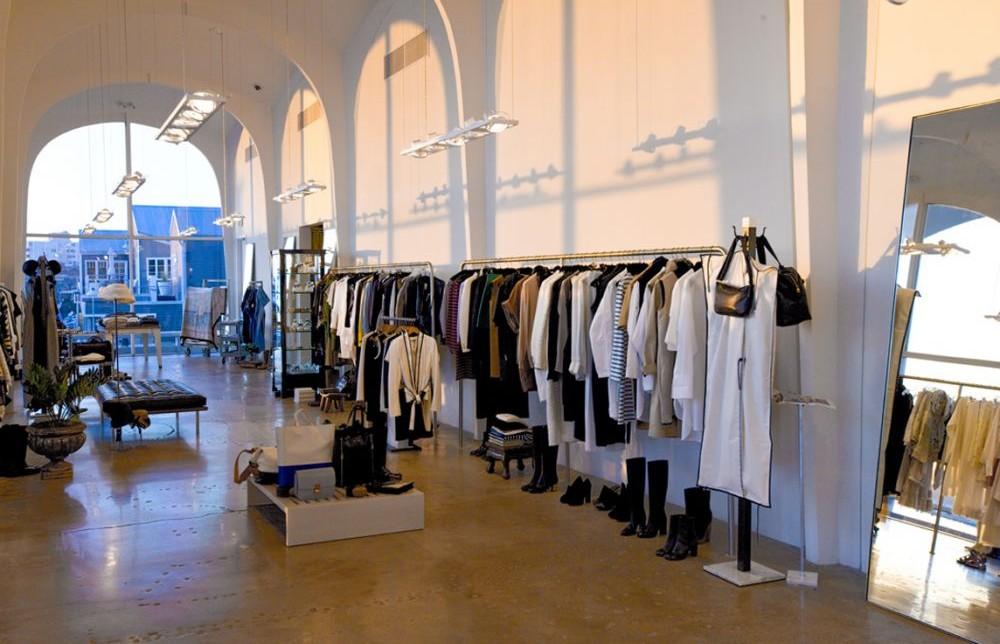 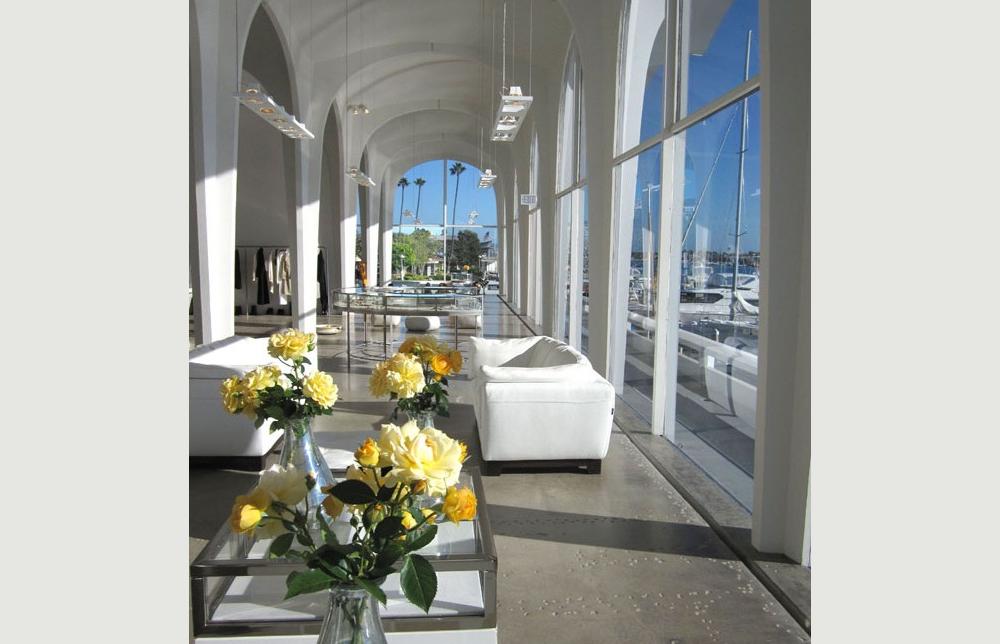 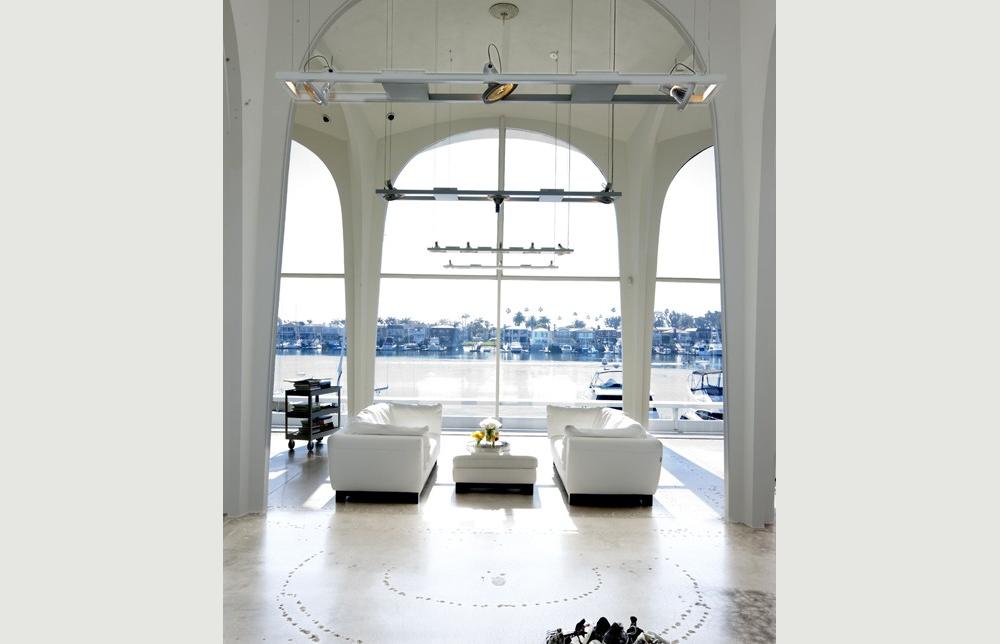 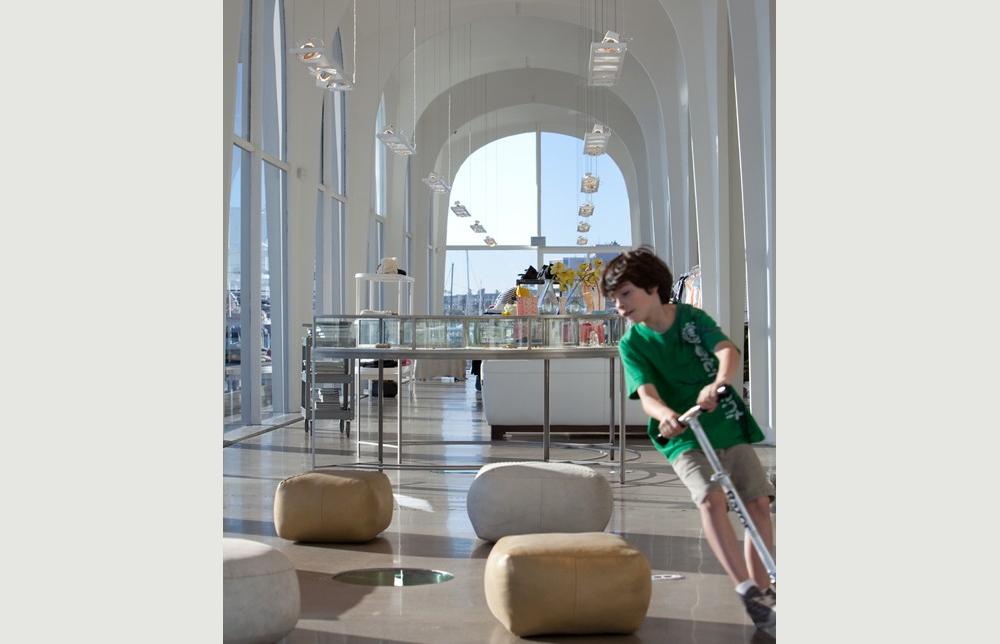 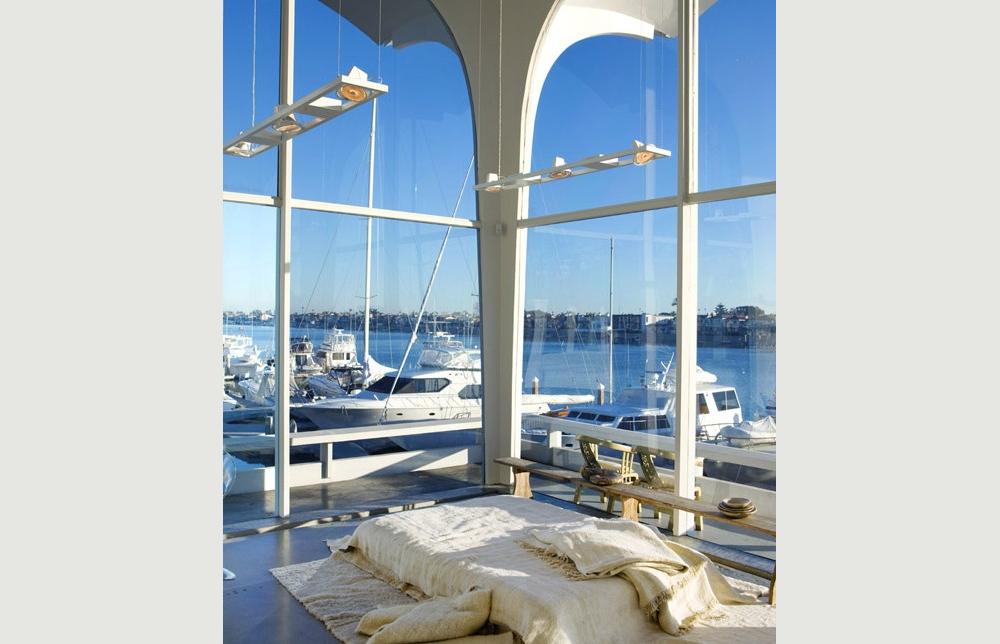 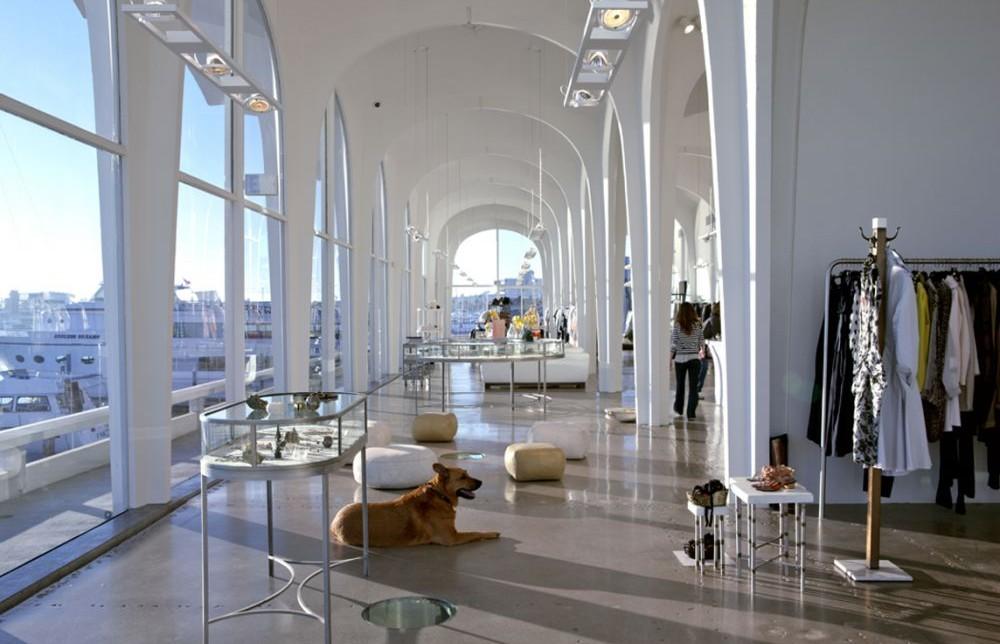 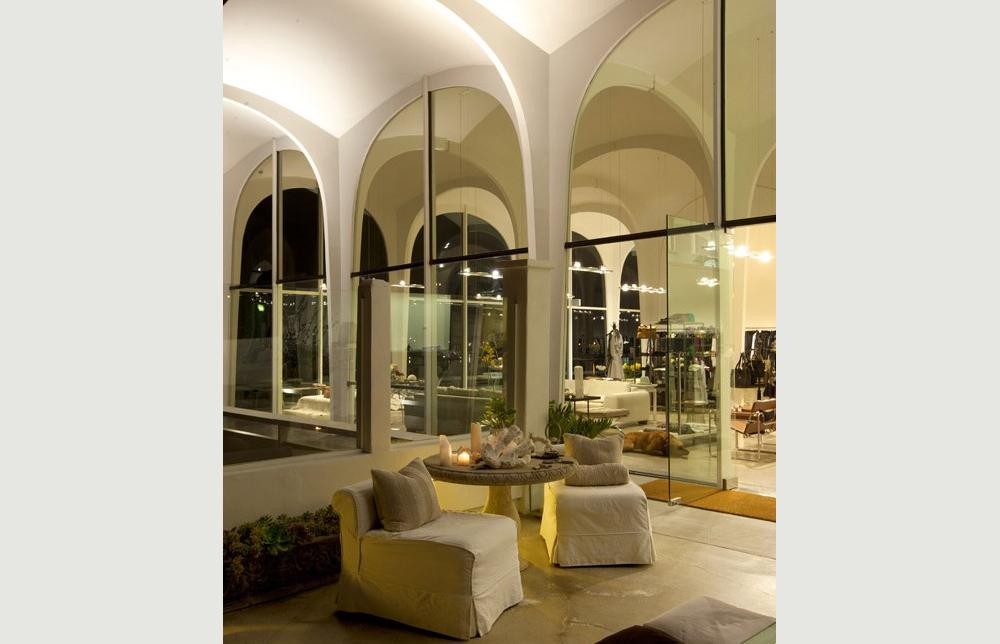 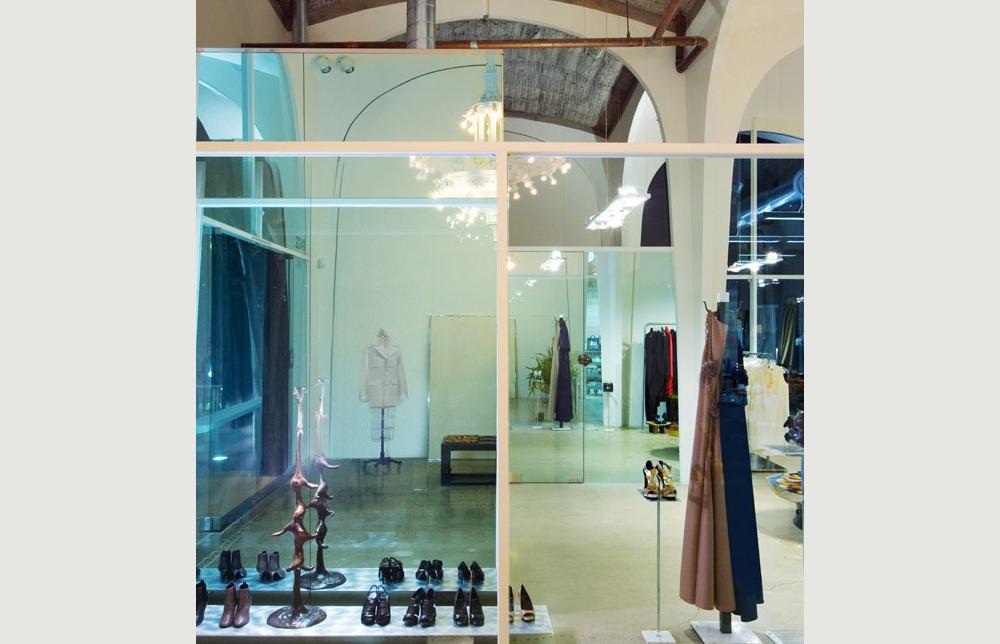 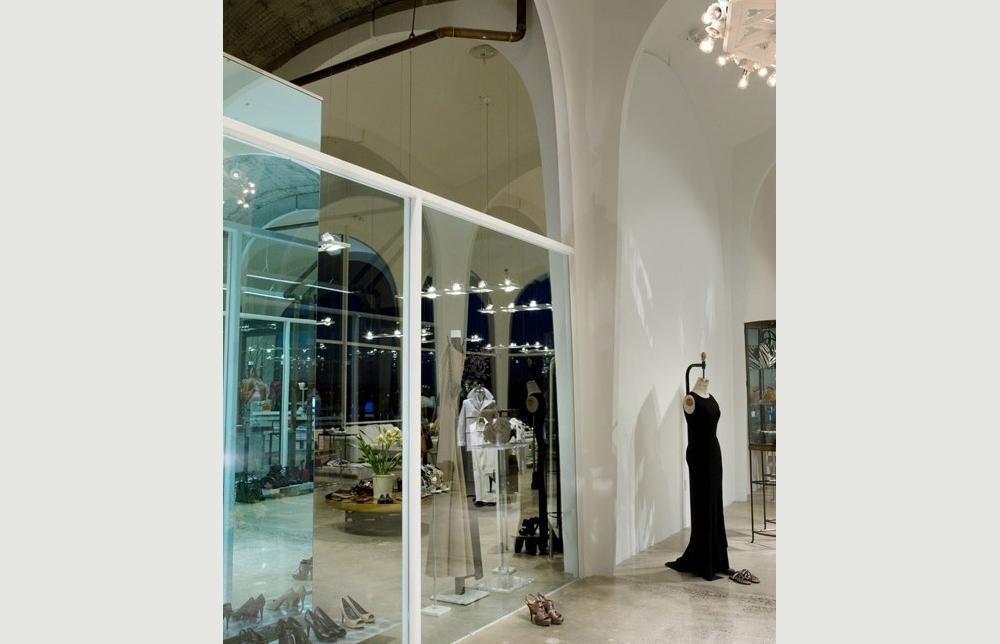 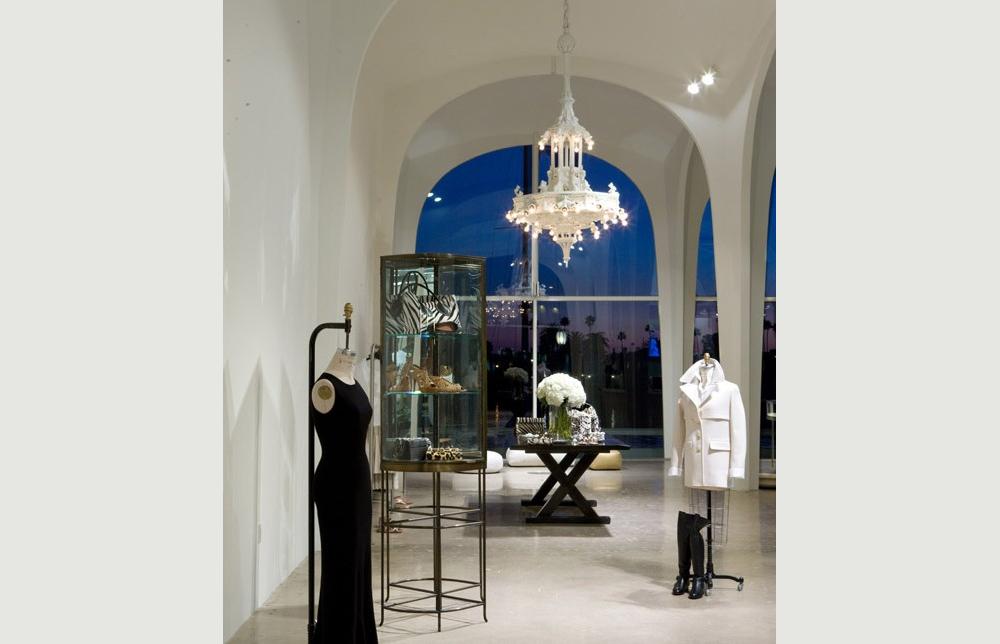 Through an extensive adaptive reuse, Paul Davis Architects PDA has meticulously restored this architecturally significant structure to its original design intent. With great attention to detail, the architects removed the stylistically mismatched restaurant rehabs and returned the Ladd Kelsey building to its pristine modernist origins. Themes of transparency, reflectivity, layering, and memory infuse the project through planning, architecture, and materials. The atmosphere combines an almost domestic casual elegance with high-end style, making loyal customers feel welcome as they shop and socialize. With the exception of the owners office, the entire store is open to exploration by clientelefrom the sunny deck on the harbor where tea is served, to the back-of-house where the kitchen and dressing rooms are located. The malleable space recalls an open, New York style loft, and allows for changing displays typical of retail interiors. The store is comfortable and casual, reflecting the Newport Beach lifestyle and combining todays clean and contemporary aesthetic with the sites modernist past.

PDAs first mission was to strip down and update the building shell. The architects removed all previous restaurant-related kitchen fixtures and appliances, as well as old mechanical equipment, banquette hutches, painted wrought-iron partitions, a cocktail bar, raised floors, dropped ceilings, and plaster screens. Since the original wood shear walls didnt meet current code, PDA replaced them with new shotcrete structural shear walls that were installed between the back-of-house and the retail floor to strengthen the structure.

The exterior and interior painting scheme reverted to the original stark white-on-white. White-painted steel mullion structures seen in the original 15-foot-tall perimeter glazing are duplicated strategically at the interior and serve as organizing partitions that help guide shoppers through the store. All of the sleek ceramic metal halide lighting fixtures are in perfect alignment with the window-bay centers and create a harmonious effect.

The new, entirely glazed entry recaptures the original, never-before-realized design. The melding of old and new is seen in subtle ways, with traces that something came before evident in markings of former handrails in the concrete entry steps, as well as on the polished concrete sales floor, where former restaurant booths are traced in radial patterns of fastener scars. Two ornate brass chandeliers at the entrythe only vestige of the mix of former styleswere painted all in white, contributing to a bright, spare environment, where salespeople, shoppers, and merchandise bring artful warmth and color to the space.

To the left of the entry, a private office is enclosed with two-way mirrors, allowing the owners to survey the sales floor while maintaining privacy. The office volume also holds a bathroom with shower. Though conventionally framed with metal studs and drywall, the bathrooms exterior is clad with the same two-way mirror glass. In this role the reflective material acts not as a window, but as an extension of the color and tone of the mirrored office volume, creating continuity between the attached elements. The play of light, reflection, and transparency dematerializes the structure. A casual seating area, daybed configuration, and exit onto the terrace and wrap-around ledge above the harbor further define the multi-functional space.

PDA capitalized on one of the structures great features, sunlight pouring in through the original floor-to-ceiling arched windows that surround the building on three sides. A new 99.9 UV reduction film on all glass protects merchandise and increases comfort, while still flooding the salesfloor with daylight and remarkable views of the sky and harbor. Minimal PDA-designed stainless-steel tube display fixtures have been set into the concrete floor, in precise relationship to the original column grid. Their upright support elements trace the arcs of the original cast-in-place concrete columns, but are held away from the surface of the columns with a controlled gap. Display fixtures from the clients previous store location are positioned among these new ones, for an eclectic twist on the new-with-old theme. Mixing stationary fixturesincluding a large circular jewelry displaywith movable ones allows for flexibility in display at this store where regular re-merchandising results in frequent visits by the devoted clientele. Merchandizing eruptionsseemingly spontaneous piles of colorful tennis shoes or vibrant pursesalso contribute to the ability of the owners to continually offer a fresh shopping experience.

In the former restaurant dining roomnow the main retail sales floorthe architects comprehensive editing of non-original elements has a powerful effect. The 18.5-foot-high ceiling now soars uninterrupted above polished concrete floors. Details characteristic of the Ladd Kelsey work, such as the original cruciform cast-in-place concrete columns supporting the vaulted domes, are now visible and unencumbered with ornamental bric-a-brac. They create an elegant rhythm throughout the cathedral-like space. Also adding to the dramatic effect are select traces allowed to remain from the buildings former tenants. Glass portholes in the concrete floor were suggested by the owners as in-fills for previous drain penetrations some were also added and offer tantalizing views of the harbors sandy bottom through the clear water below. Depressions in the flooring left from removal of restaurant booths were reclaimed and filled with seashells to create repeating circular ripples that extend the curved motifs throughout the building and interior. Even the semi-circular white plaster cash counter was created in the shape and structure of the demolished exhibition kitchen.

Behind the cash counter, back-of-house areas are established in the former restaurant kitchen. The design intent was to create a charged juxtaposition between the elegant white-plastered public areas and the archeologically exposed back-of-house, now featuring a rich, warm palette of exposed rough concrete structure, original copper roof drain lines, and rigorously composed new mechanical systems, all illuminated with shafts of sunlight through new skylights in the domed ceiling. The heavy steel structural frame once added to support the exhibition kitchens domed plaster roof remains. Now blackened for uniformity and dramatic contrast with exposed silver ductwork overhead, it acts as a symbolic gateway to the area where staff and customers mingle like old friends at home. Here, pristine white gives way to original industrial gray andin seemingly random patchespink cinderblock, which, along with the rough-formed ceiling, were sandblasted clean. The dressing room is lounge-like and inviting. Long camel-colored linen curtains cascade to the floor from theatrical track, while overstuffed sofas and easy chairs encourage customers to luxuriate with cocktails or fresh-baked cookies from a local bakery. Shoppers perception of subtle color differences among the merchandise is enhanced by the warm and flattering dressing room lighting, realized through mirror-mounting of advanced neon-like Japanese fluorescent tube lamps, exposed on elegant, custom polished-chrome housings.

With its mix of the industrial and an elegance rooted in a remarkable synthesis of classic modernity and vaulted forms recalling an old-world bazaar, the new Amarees store has delighted long-time shoppers and new customers alike. The owners welcome an avid and discriminating clientele who shop for everything from fine jewelry and haute couture to antique carved-marble heads and lifestyle objects. Floating above the water, this magnificently restored building is everything the stores owners had dreamed ofa palace of playful indulgence and sophisticated delights, offered to its visitors with a casual grace that feels like home.