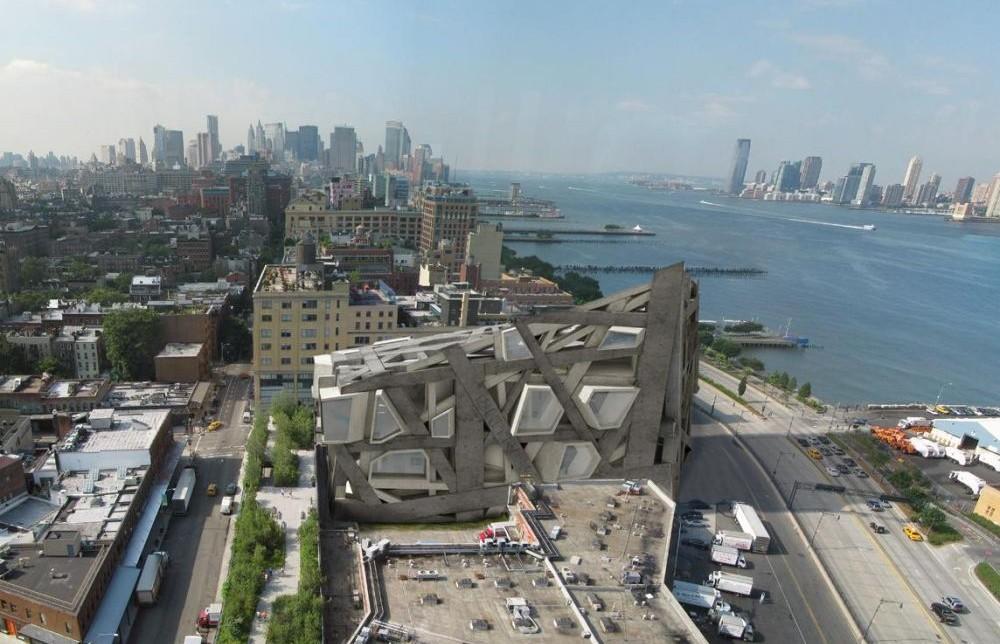 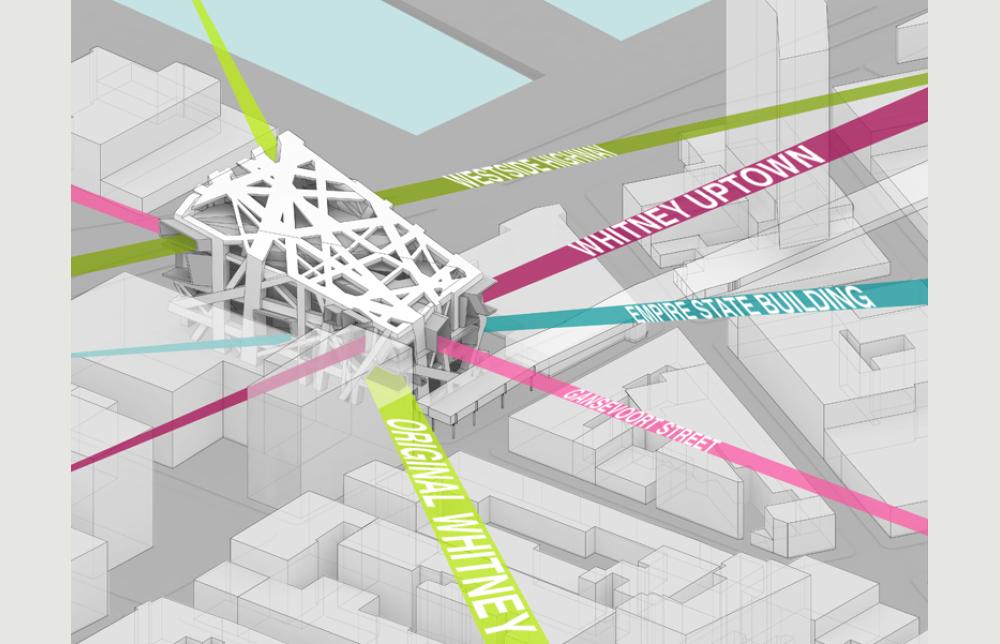 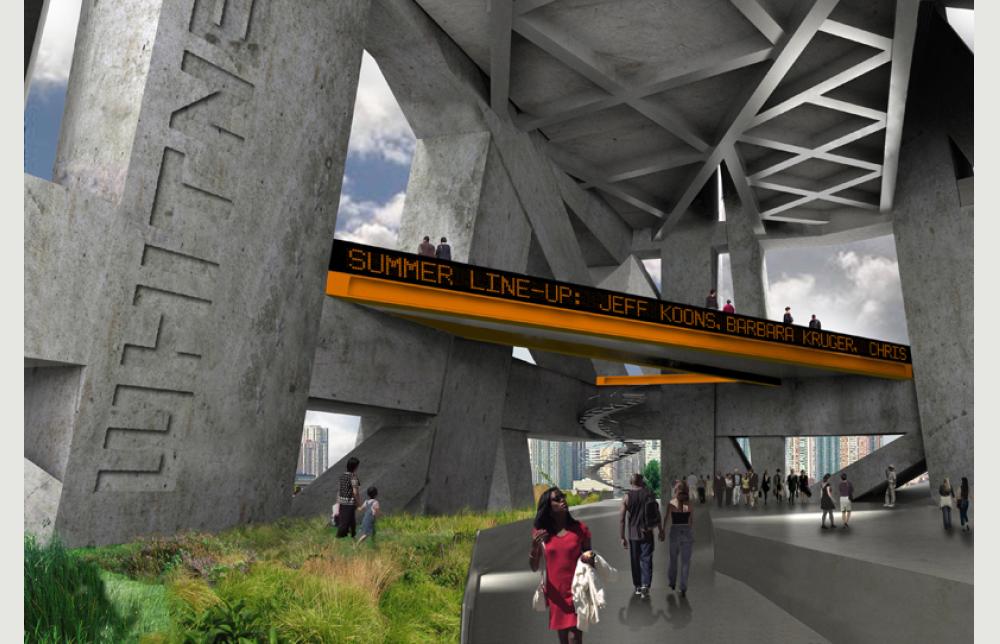 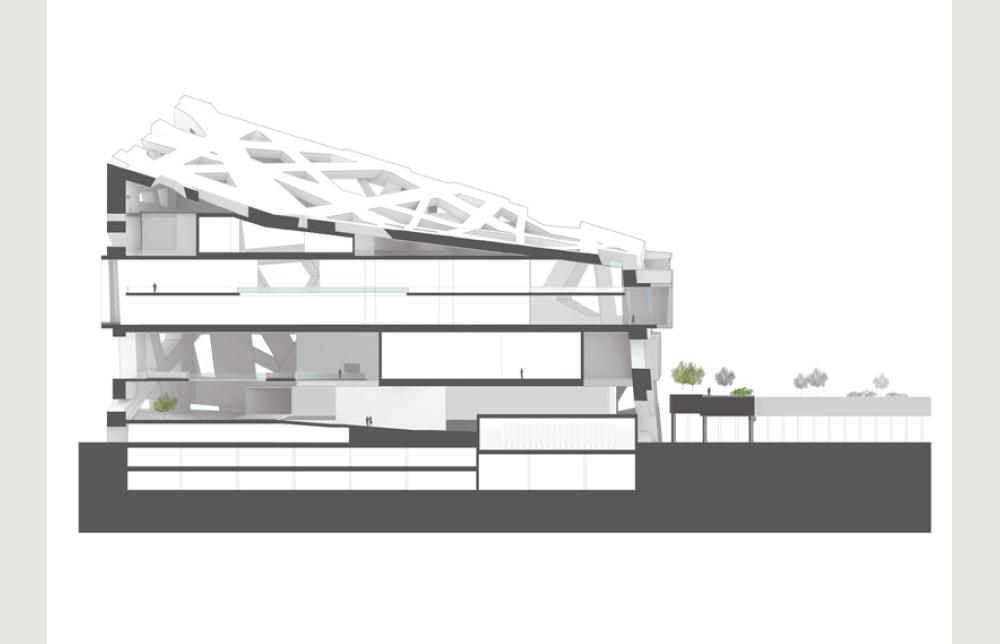 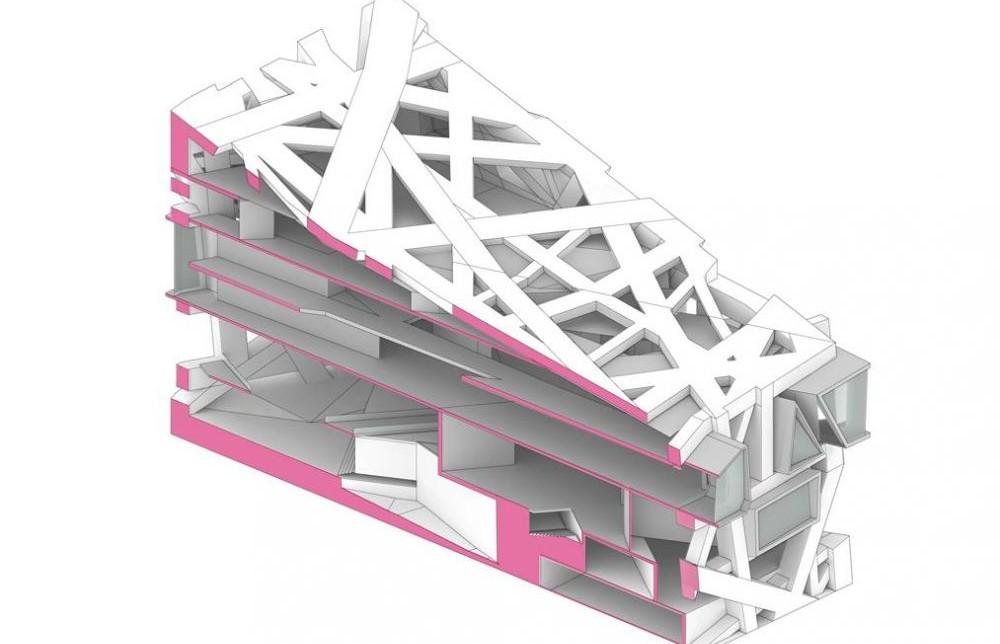 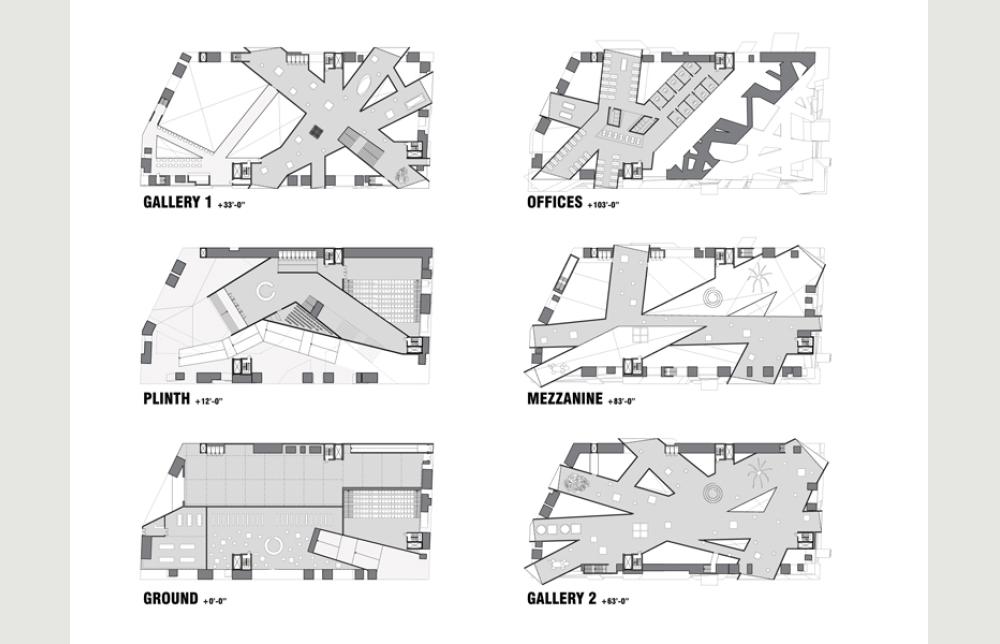 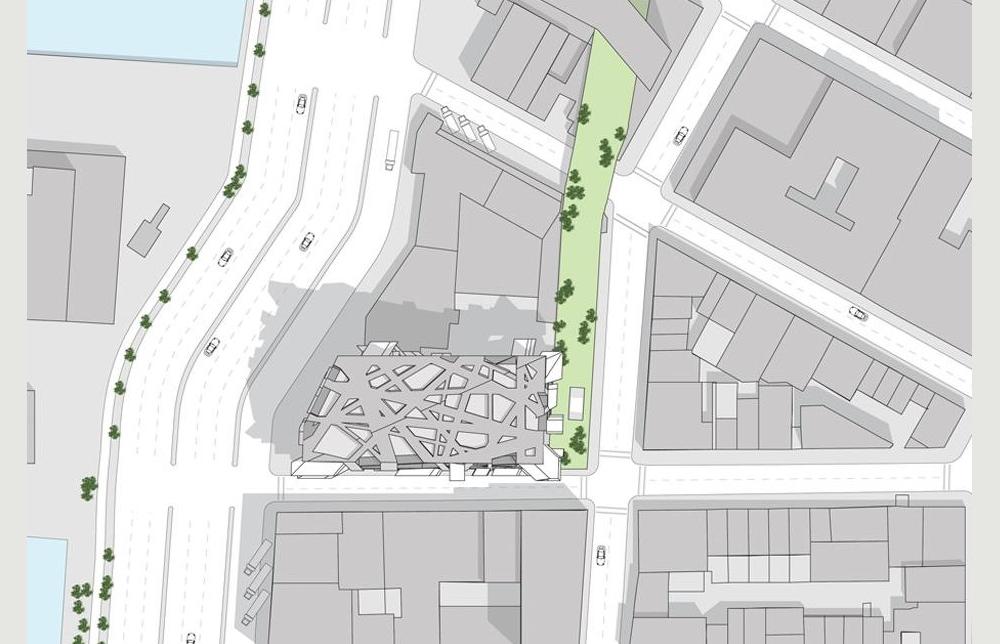 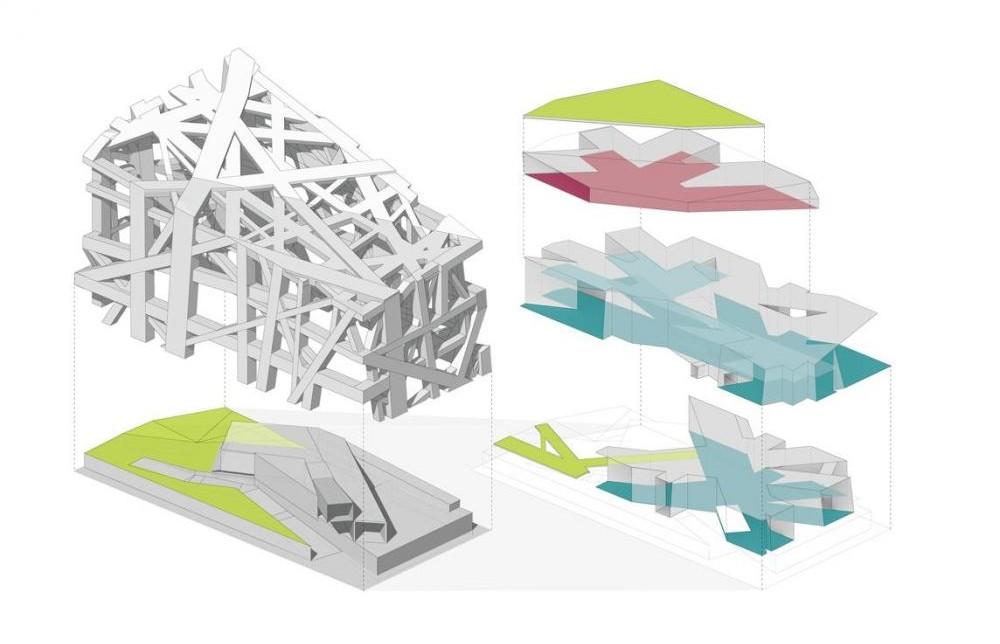 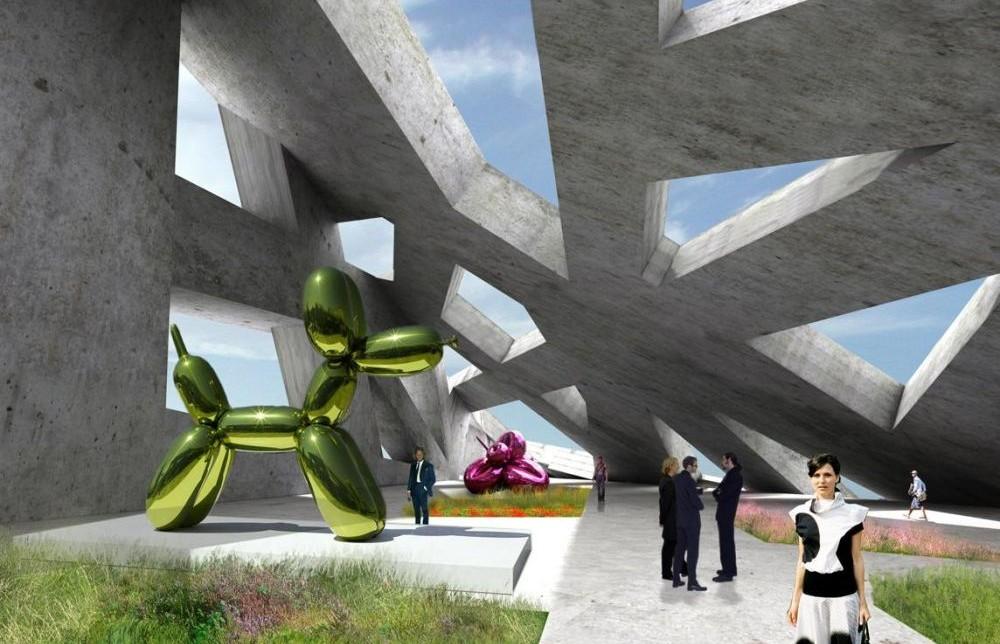 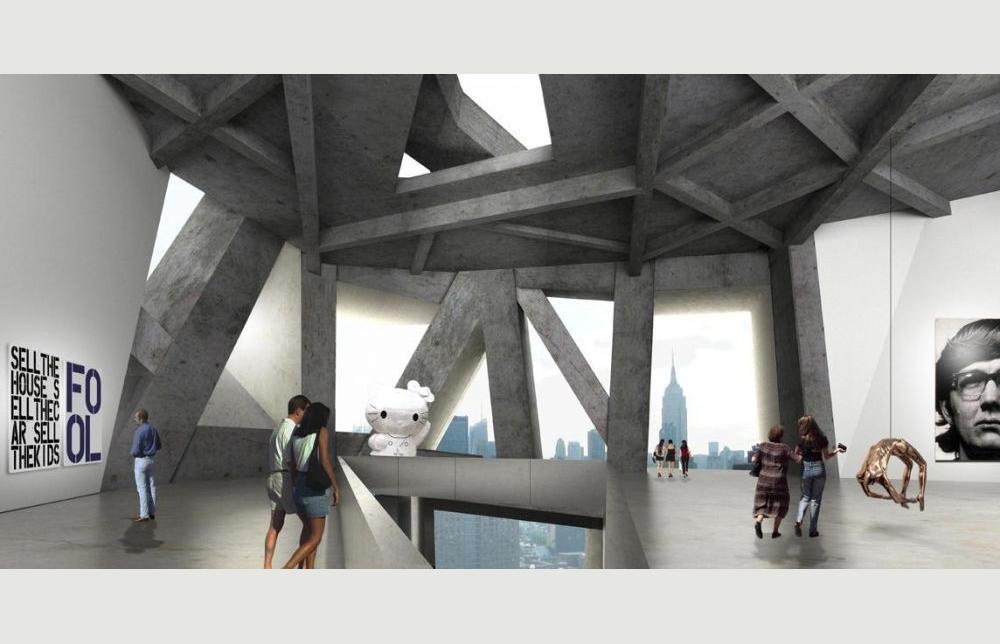 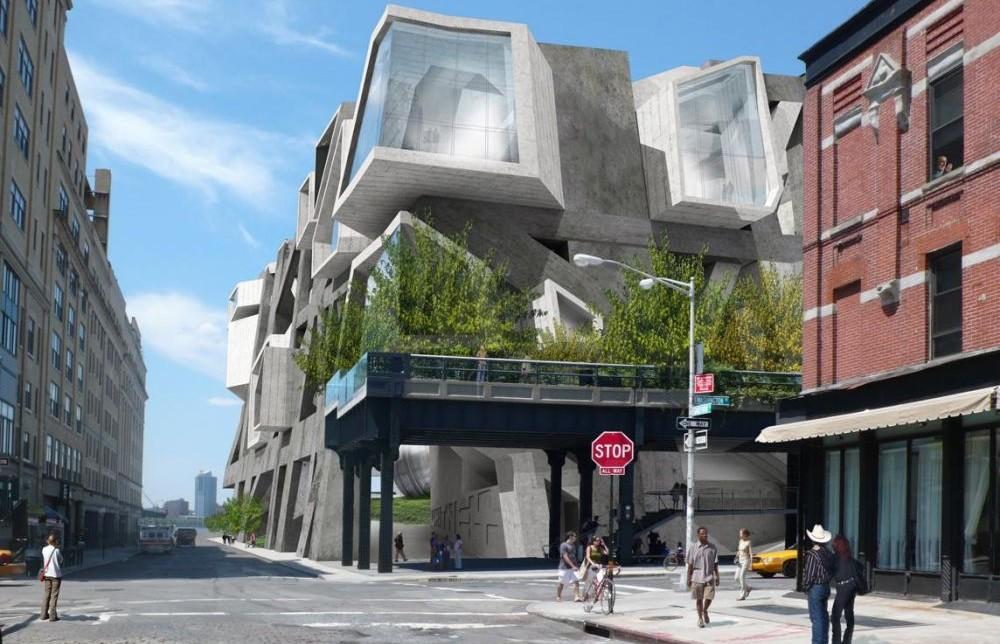 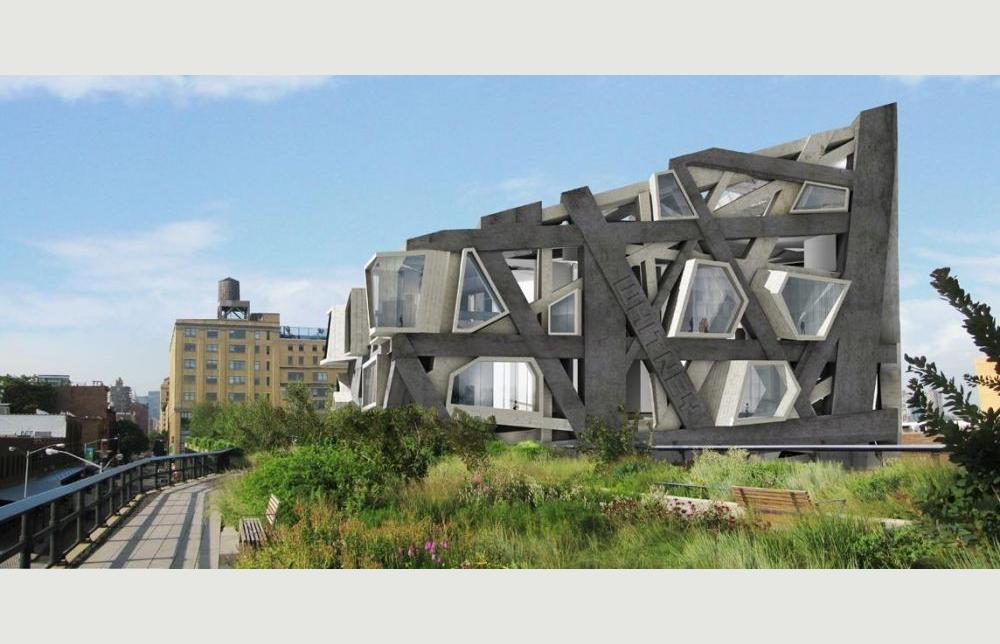 New York, NY) September 14, 2010 – New York architects Axis Mundi have re-imagined the Whitney Downtown Museum with a self-initiated proposal that is raw and provocative, and as bold in spirit as the original Breuer building on Madison Avenue. In the early 1960’s, when Marcel Breuer received the commission for the Whitney, he asked “What should a museum look like, a museum in Manhattan? Surely it should work, it should fulfill its requirements, but what is its relationship to the New York landscape? What does it express, what is its architectural message?” He stated “It is easier to say first what it should not look like. It should not look like a business or office building, nor should it look like a place of light entertainment. Its form and its material should have identity and weight. It should be an independent and self-relying unit, exposed to history, and at the same time it should transform the vitality of the street into the sincerity and profundity of art.” With an intense sculptural presence, the Axis Mundi design represents an historical extension of the Whitney’s commitment to innovative architecture, much as its polygonal windows and raw surfaces pay homage to the original Breuer fenestration and its formal brutalism.

Invisible Sight Lines Organize Program The site is located at the beginning of the High Line, at the intersection of Washington and Gansevoort Streets. Axis Mundi sought to ground the new building in a web of “historical axes” which form and organize the program. The plan is based on a series of sight lines extending to 10th Avenue, the Empire State Building, the Whitney on Madison, and the location of the original Whitney on West 10th Street. Galleries Suspended in a Lattice A desire for column-free galleries led the architects to create a perimeter superstructure to contain the staircases, escalators, elevators, and mechanical rooms. This structural lattice allows the galleries to float freely, suspended like bridges, unimpeded by a typical grid structure. The lattice allows light to flood the building in unexpected and dramatic ways, heightening the visitor’s perception of the artwork and the city. Intermingling Urban Fabric Maintaining vitality at street level and reducing the distance between the street and the art itself was an important consideration for the designers at Axis Mundi. Instead of designing a large vacant lobby, an informal intermingling of public and private space occurs on the street level plinth, creating a complex folding of the urban fabric. The plinth is populated by large-scale sculptures, an outdoor cafe bridge, an info kiosk, and a performance area. A continuous path, weaving in and out of the lattice structure, leads the visitor from the entrance ramp at the corner of Washington and Gansevoort up to the panoramic viewing deck, overlooking the Hudson River and the High Line. John Beckmann, principal of Axis Mundi stated “We imagine the contemporary museum to be a dynamic environment – a space that is less a container and more of a conduit.”