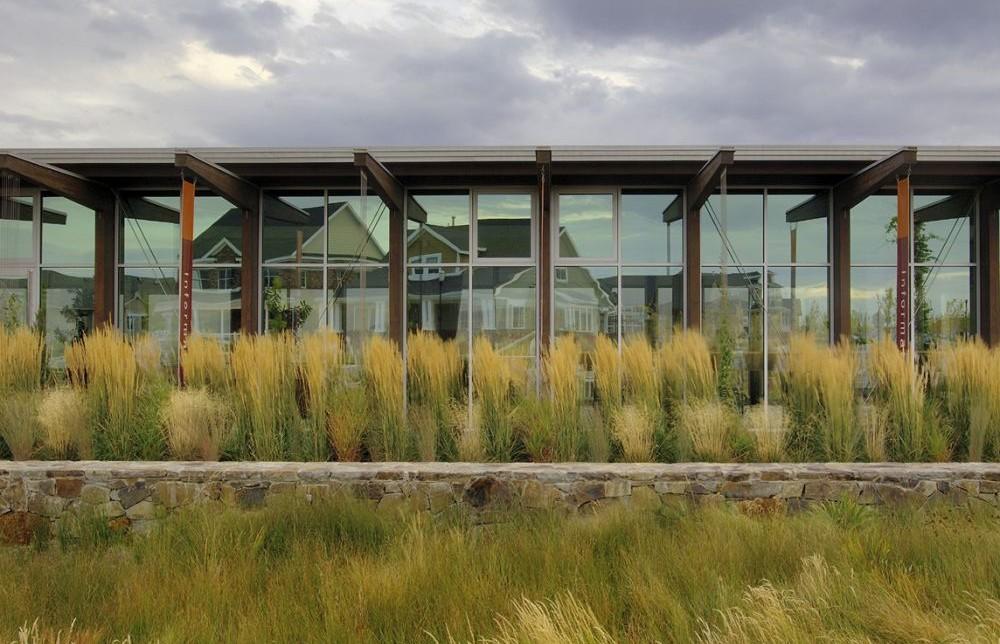 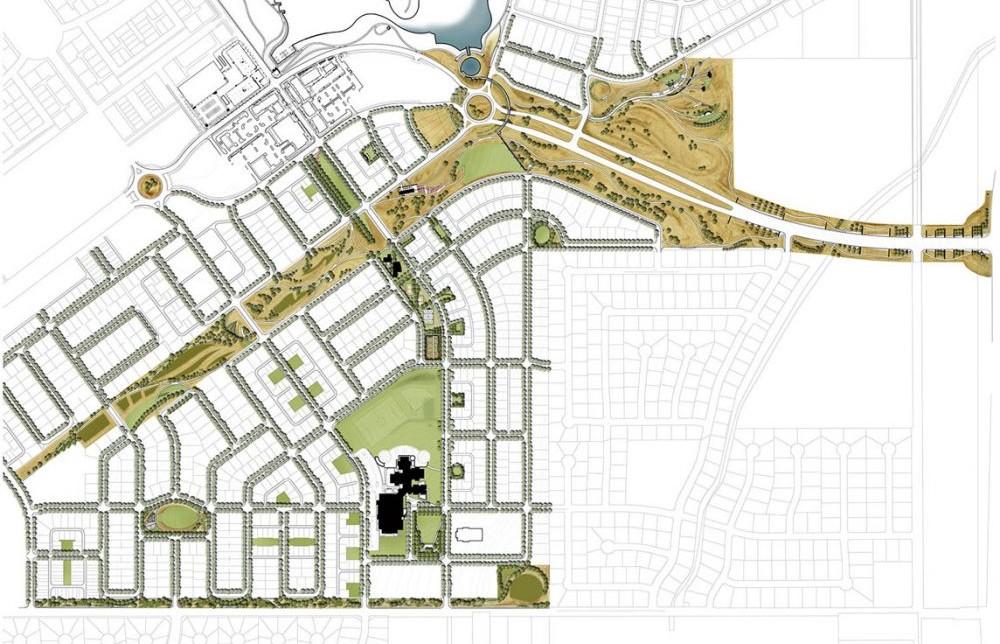 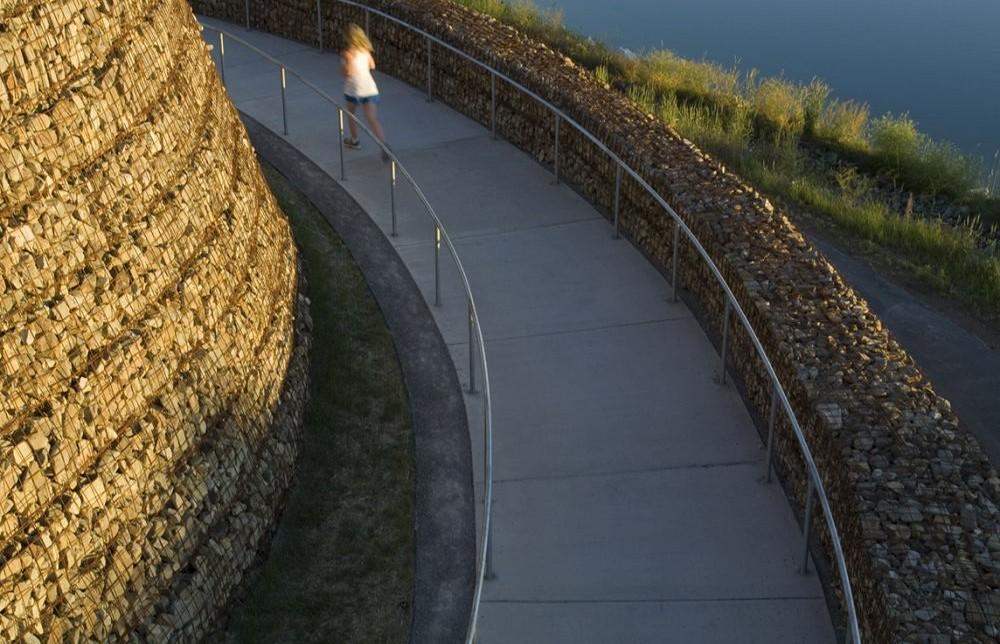 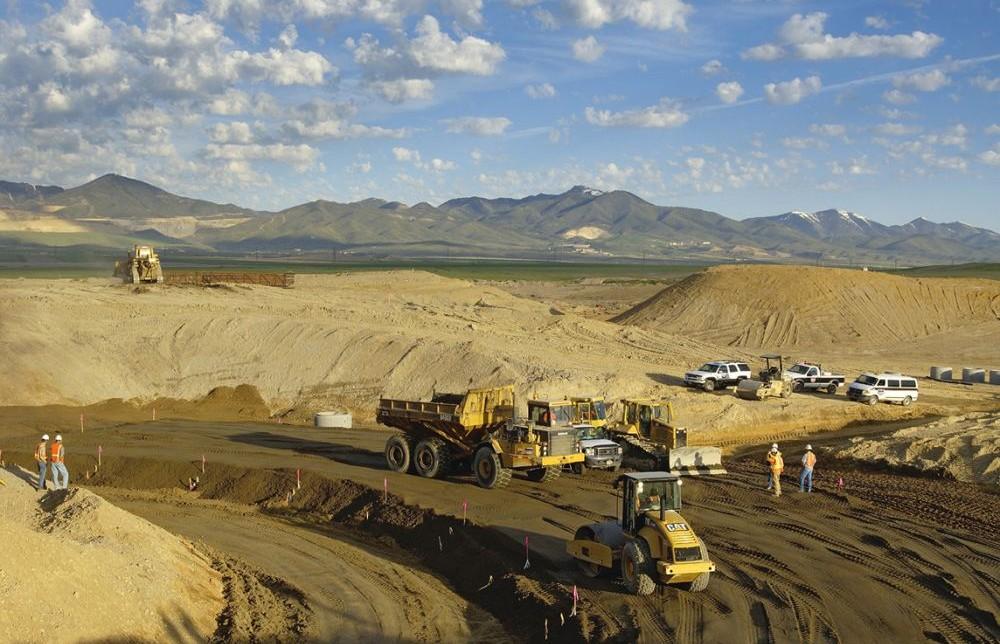 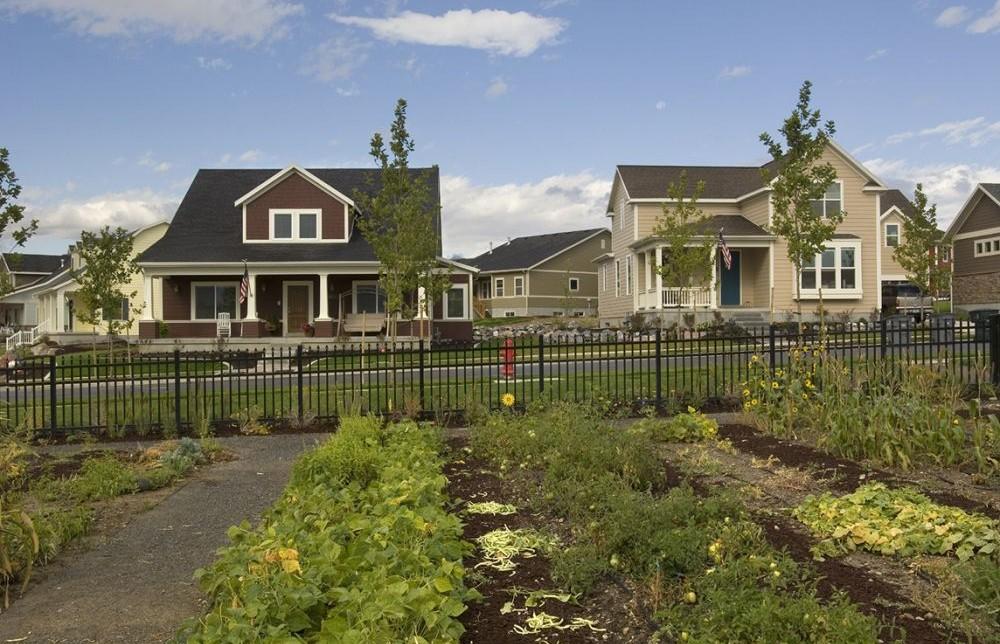 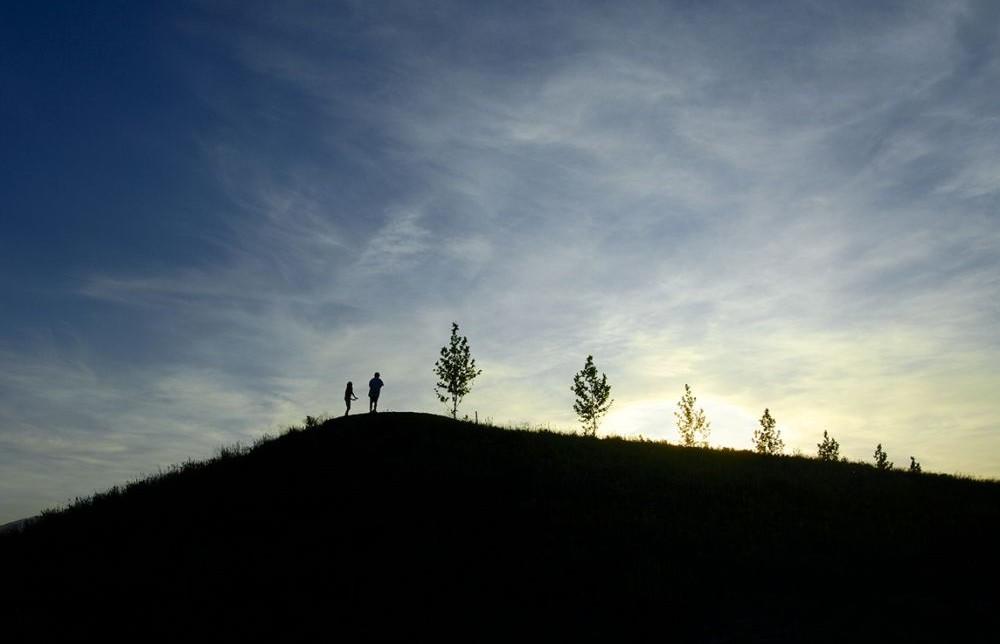 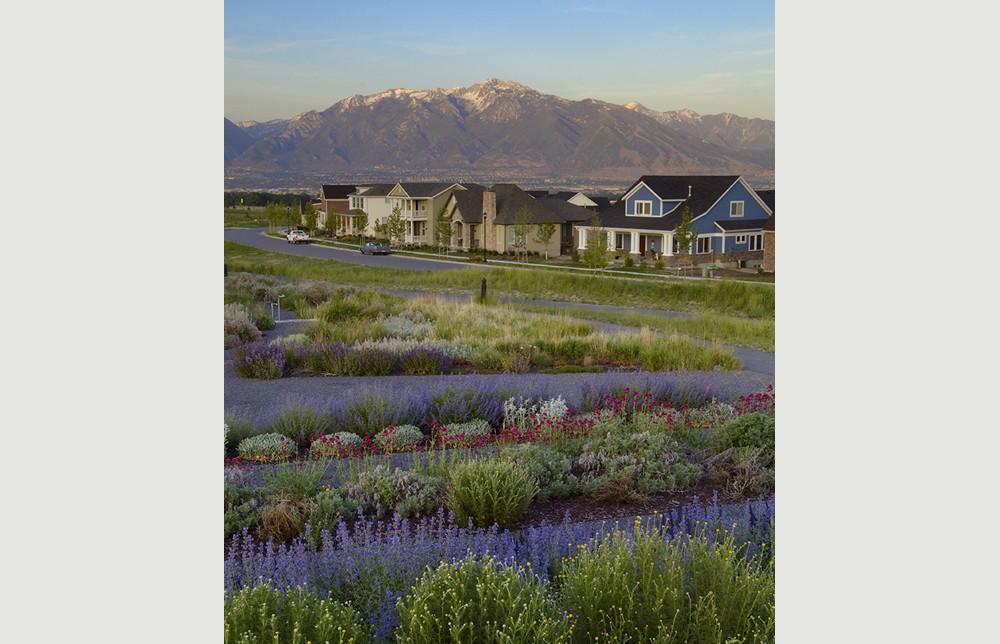 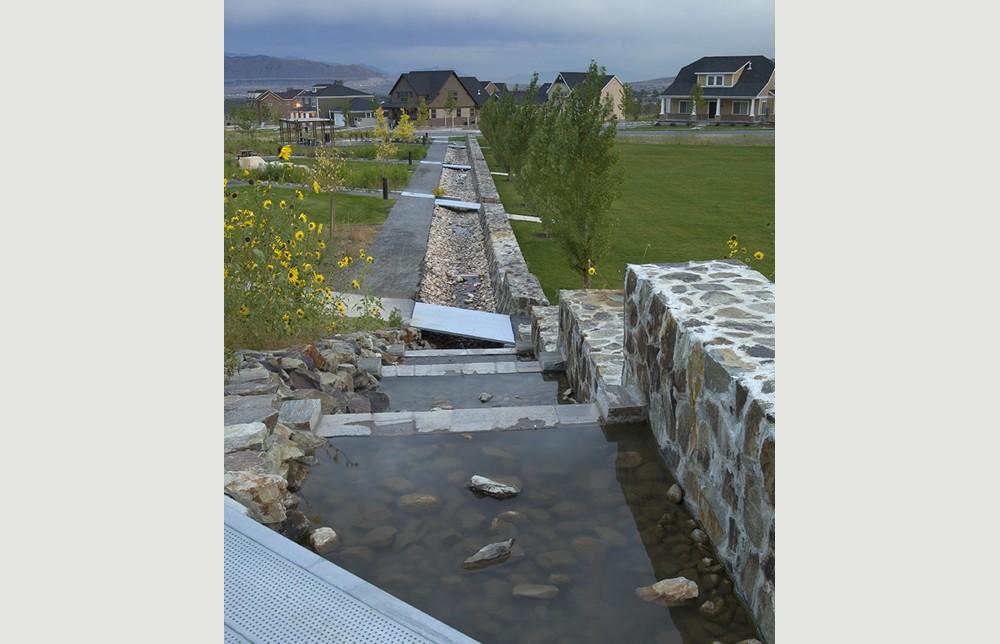 Bingham Copper Mine Carved Inspiration:
In 1848, the sites potential for copper extraction was discovered by two Mormon pioneer brothers while grazing cattle and horses on the land. Respecting their leader, Brigham Young, who advised against mining operations because the establishment of settlements was of paramount importance, the brothers did not stake their claim. However, nearly 60 years later, mining operations officially began. In the early 1920s, the canyons productivity notably expanded, employing 15,000 people of widely varying ethnicities who lived in large residential communities constructed on steep canyon walls. Today, the mine remains an active part of the regions employment infrastructure and is noted as the largest and deepest open pit copper mine in the world.

Built at the toe of the Bingham Copper Mine, Daybreak was carefully planned, not just to enrich peoples lives now with beautiful land, plentiful water and clean air, but also to ensure that future generations may do the same. At completion, the 4,126-acre new community will include 20,000 residential units, making it the largest master-planned community in Utahs history. The landscape architect was hired to create a parks and open-space master plan for the initial 330-acre Founders Village, where 115 acres of public parks and open space nearly 35 of the community elevates local and regional design standards.

Abstracting the Salt Lake Valley:
Situated on a western bench of the Salt Lake Valley, the high-desert landscape evolved into a shrub-steppe community of native grasses, sagebrush and limited scrub tree growth. The sites landscape character is derived from the regions environmental context and historic cultural landscapes. Wind and water-sculpted landforms, layers of geologic strata natural vegetation patterns and cultural patterns are evoked in the design. Man-made forms create a narrative landscape expression that feels connected to its surroundings.

The design intent was to root the landscape within its region and create a new authentic, forward-thinking, western landscape that gives a nod to the past while meeting todays environmental challenges and embracing fresh aesthetic forms. The landscapes are intentional, artistic expressions of their natural and cultural context. Innovative, geometric landforms and battered gabion walls constructed of reclaimed waste rock from the Bingham Mine, express connections to the regions heritage. Instead of going to waste, over 43,500 tons equating to over 87,000,000 pounds of recycled rock was reused throughout the landscape. Native plants including bitterbrush, elderberry, and rabbit brush connect the community to its natural history including wildlife corridors that run to the mountains and vegetative patterns of the area.

Perched on a landscape plinth overlooking the Wasatch Mountain Range, the Daybreak Information Center was strategically aligned longitudinally with Twin Peaks. The site plan and planting scheme demonstrate various landscapes at Daybreak. A storm-water wetland greets guests with an ever-adaptive plant palette, crossed by a clean wooden boardwalk. Native meadows of wildflowers and grasses, productive edible gardens and flowering terraces demonstrate the beauty of water-wise landscapes in the arid, high-desert climate. Recycled rock is used in stone site walls while permeable crusher fines and sandstone pavers allow water to percolate into the ground.

Hillside Park offers a sculpted landscape abstraction of natural foothill forms and vernacular water courses. The water canal serves as an outfall and aeration channel for newly constructed Oquirrh Lake and carries water to the constructed wetlands below. Poplar windrows along the canal recall the iconic early Mormon pioneer tree plantings along irrigation ditches that western writer Wallace Stegner dubbed The Mormon Landscape. The riparian corridor fosters wildlife habitat and supports a growing cottonwood gallery. Water courses also serve as a storm water conveyance system leading to infiltration basins where 100 of a 100-year storm is infiltrated into the ground.

Positioned on a hillside facing the dramatic Wasatch Mountain Range, Sunrise Mountain Park is organized around views to the mountains, canyons and the early sunrise, which is the source of the communitys name: Daybreak. Each pathway points to a landmark whether it is a peak, a canyon or a solstice/equinox sunrise.

Community Design Principles:
The design and execution of Daybreaks public landscapes, including parks and open space, solidifies the developers founding principles of social well being, environmental stewardship and economic prosperity. Measurements, taken both pre- and post-development, reinforce the projects success.

Social Well Being:
Public landscapes form the backbone of the social and cultural systems at Daybreak. Each component of the system, including an eventual 22 miles and counting of passive trails, recreational water features, active sporting activities, performance space and native demonstration gardens, is carefully programmed to play a specific role in community life. Designed to encourage face-to-face interaction and to connect residents with fellow residents, every home is located within one-quarter mile walking distance of a park or the extensive trail system which links neighborhoods to schools, churches, community centers and Oquirrh Lake. In 2010, a report noted that 88 percent of Daybreak students walk to school, compared to 17 percent in surrounding, less-walkable neighborhoods. Six community gardens with over 250 individual garden plots built to date and more on the way carry on a lasting tradition of self-sufficiency in the Western valleys and serve as an educational outlet for youth.

Environmental Stewardship:
The environmental design intent of the landscapes at Daybreak is twofold: to re-introduce components the indigenous ecosystem and to house the bulk of the communitys environmental systems. In Founders Village, 67 percent of the landscape is comprised of native, drought-tolerant species, greatly reducing water demand. Turf is limited to required active play fields. Newly planted trees 8,600 presently and 100,000 by project completion provide protection from harsh northern winds. Homes save an average of 5,206 gallons of water each month, measured against comparable homes in older neighborhoods. As of August 2009, the communitys 2,106 homes had saved over 41,000 gallons of water per home for a total of 79,759,877 gallons saved. Built to EPA Energy Star guidelines, Daybreak homes are at least 30 percent more energy efficient than new homes built to Utah state code. Daybreak Corporate Center is Utahs first LEED Platinum building, and the community is a LEED Neighborhood Development pilot project.

The public landscapes at Daybreak shift the prevailing paradigm of greening the desert with extensive water use by demonstrating a way to create beautiful and rich environments with responsible water use. The 65-acre Oquirrh Lake is the communitys central organizing feature. The lake is not only a visual amenity but also a functioning riparian environment. Eight acres of in-lake wetlands and seven acres of constructed storm water wetlands provide habitat for fish and for waterfowl traveling the Great Salt Lake migratory bird flyway. All stormwater that falls on the site is captured, cleaned and infiltrated into the ground through a series of connected bio-swales, basins and constructed wetlands before reaching Oquirrh Lake during large storm events. The system reduces runoff-related pollution, prevents downstream flooding and helps to recharge the local aquifer. The design eliminates the need for any connections to the citys municipal stormwater system. A secondary water system, connected to the regional canal network, supplies the entire open-space system and Oquirrh Lake with raw water for irrigation needs rather than using the municipalitys potable water. From the projects conception, landscape architects worked hand-in-hand with wildlife biologists to create an extensive wildlife strategy for plant species, wildlife movement corridor widths and breeding conditions.

Economic Prosperity:
The parks and open-space system creates value in the community for the land owner, homeowners and future tenants. One-third of the homes face onto open-space and thereby command premium prices and resale values of greater than 10 percent over other locations. The use of on-surface storm water management systems eliminates storm water impact fees and greatly reduces underground piping, infrastructure and maintenance and will save an estimated 70 million at buildout of the community. During the past four years, Daybreak has been the top selling new home community in Utah; one in five new homes sold in Salt Lake County is located in Daybreak. In 2009, Daybreak was ranked as the nations sixth best-selling master-planned community. In 2010 the project received the Governor of Utahs Quality Growth Award as well as the National Association of Home Builders Best in American Living Platinum Award for a Suburban Smart Growth Community and Community of the Year Award.