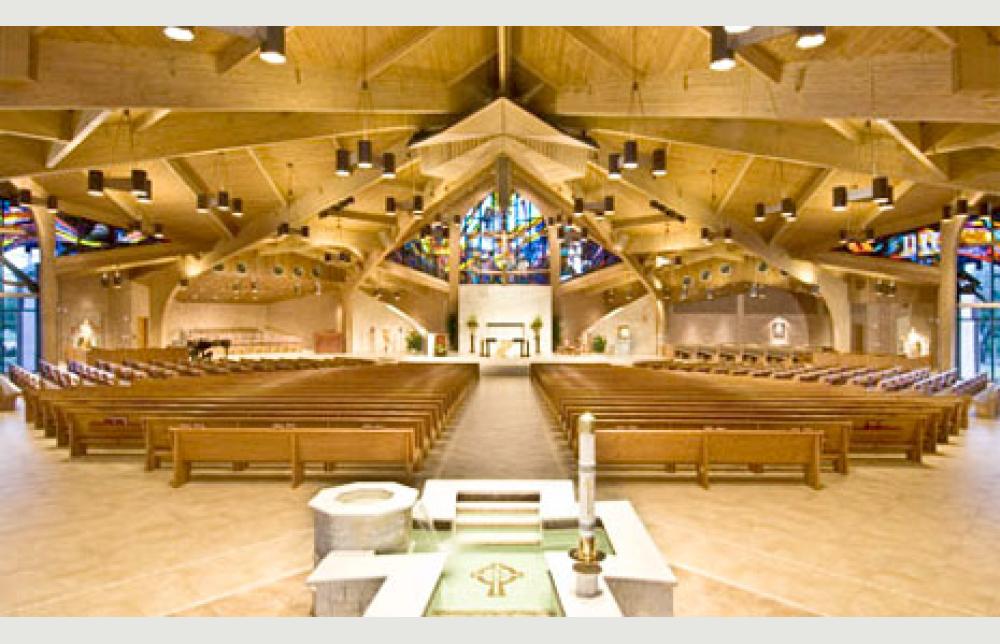 How did this wood ceilings niche and this idealistic management team connect to form 9Wood, Inc.? Like all history, it begins before we made a single contribution to wood ceilings. Prior to this century, of course, wood ceilings have been utilized in many architectural styles. The most common were wood coffer and tongue & groove plank ceilings.

The starting point for 9Wood’s antecedents, however, really begins with the installation of the first suspended wood ceiling. The operative word here is “suspended.” This marks the start of attaching wood ceilings to suspended T-Bar grid for commercial application. Using T-Bar to suspend wood ceilings brought all the advantages of suspended ceilings (low cost, ease of installing mechanical, electrical, & plumbing assemblies, and accessibility).

In the US, credit is usually given to Bill Shank. Shank, an Independent Manufacturers Rep for Division 9 specialty ceilings, was attending a trade show in the mid ’60s and happened to come across a Howard Manufacturing Grille Bench. The Hemlock Grille Bench had been developed by Paul Howard to utilize the off-fall from his Hemlock ladder business located in Kent, Washington. Shank saw the product and thought, “That should be used in the ceiling!” Along with Roger Leon, of DSA New York, he developed a clip that would attach the grille bench to T-Bar-and the rest is history.

Another specialty ceiling contributor in the 1960s was Bud Blitzer of Integrated Ceilings. Coming out of the lighting business, Bud created the first concealed suspension ceiling. This breakthrough ushered in the real era of specialty ceiling manufacturing. It opened up huge design opportunities for architects.

Bud’s friend Sharol Brodie, of Forms + Surfaces, a trend-setting company in the 1970s, developed a Linear Wood Plank ceiling, along with other specialty finishes.

In the 1980s other companies pioneered the suspended wood ceiling business, including Jim Thorson of Wood Tech Pacific, and Steve Anderson of ASI. A pair of brothers from Belgium, using their trade name Derako, began exporting their European-made Linear wood planks into the United States. Wayne Robinson began sales managing the Derako line, eventually getting into the fabrication business as Rulon Co.

In the early 1990s, two of the owners of 9Wood, Charley Coury (Sales and Estimating) and Dan Boustead (Engineering and Operations) began working for a company called Pacific Wood Systems, a spin-off of Wood Tech Pacific. The owner, Merle Tyler, was a creative entrepreneur and offered Charley and Dan wide latitude to help build the business on the sales side and on the engineering side. Eventually, Leo Batenhorst (Project Management) and Andy Gossard (Controller) were also added to the PWS management team (later renamed Wood Ceilings, Inc.). Working together at WCI formed the foundations and forged the friendships that helped launch 9Wood, Inc.

In the 2000s other companies began entering the wood ceilings business. Armstrong World Industries, apparently energized from its business dealings with the European manufacturer Wilhelmi, expanded its wood ceiling offerings. Other companies have come and gone over the years, but these remain the prime movers, and the main thread leading to the founding of 9Wood.

In July 2004, after experiencing some dramatic changes at WCI, 9Wood, Inc. was born. “We chose 9Wood because we felt it poetically captured the essence of our identity,” Coury recalls.