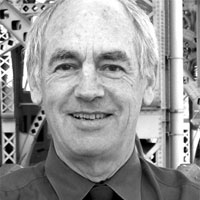 School buildings have historically been designed for the pedagogy of the day; as pedagogies change, the buildings are difficult to reconfigure. For this infill site, the challenge was to create a structure and façade that allowed for great program flexibility…

School buildings have historically been designed for the pedagogy of the day; as pedagogies change, the buildings are difficult to reconfigure. For this infill site, the challenge was to create a structure and façade that allowed for great program flexibility behind it. It was an imperative that this flexibility would be possible at an affordable cost. A long-span structure with deep lateral beams allowed classroom and office walls to be non-structural partitions. And the design of the pixelated façade created a panelized cladding system that did not impose a formal exterior logic for the placement of the windows. The school had an extremely tight budget, caused both by the high cost of New York City construction at the height of the building boom and its location within the 100-year flood zone. Every decision had the goal of enhancing program and design for the school while minimizing costs.

Absolutely. The clients were interested in our architect-led design building process. They were willing to take a risk by choosing a single source for both the design and construction for the whole process. We often recount that they joked that they would either be called fools or geniuses by the end of the process. But very soon, they saw that we became full partners with them and advocated fully for them throughout the timeline of the project; from developing options for the feasibility of the site, design through construction, to ultimately equipping them to manage and operate their increasingly complex building systems controls due to advancing sustainability requirements. We even outfitted their temporary school facility during construction for their operations. What might have been perceived as a great risk to put all eggs in one basket proved to increase a sense of ownership for the sophisticated results by all parties involved— from the consultants to the sub-contractors to the clients now living with the building.

I have been lecturing in architectural schools and professional design conferences across the country about our work and how we are rethinking the idea of craft in today’s building process. It is unquestioned that clients fear “real Architecture” because it often doesn’t perform, blows budgets and is badly crafted. There has been an incredible response by both the young, up and coming generation and long-time practitioners alike to break down the wall between design and construction. There is a growing real interest in how one builds buildings, rather than the paper architecture that was so popular in the ’90s, incidentally during the last major recession.

The popularity of design-build programs such as the Yale Building Project, The Design Workshop (a design-build initiative at Parsons School of Design), and Rural Studio at Auburn University show students’ growing recognition of this problem in the profession. The story of the East Harlem School points to the promise of architects taking responsibility for not only designing, but constructing our environment.