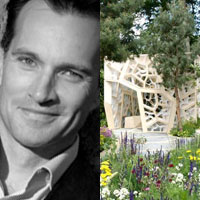 This particular project was dictated by an unusually conceptual client brief. One of the initial and ongoing challenges was to communicate the concept as simply…

This particular project was dictated by an unusually conceptual client brief. One of the initial and ongoing challenges was to communicate the concept as simply and as visually as possible.The brief particularly lent itself to two themes which informed the design and design process: the exploration of organic forms and the use of sustainable products and materials.

Timber was an obvious choice but we also explored the use of products that had hitherto not been utilized structurally. One such product was bioplastics – the initial design concepts being driven by a desire to create a pavilion that was, at least notionally, completely biodegradable. 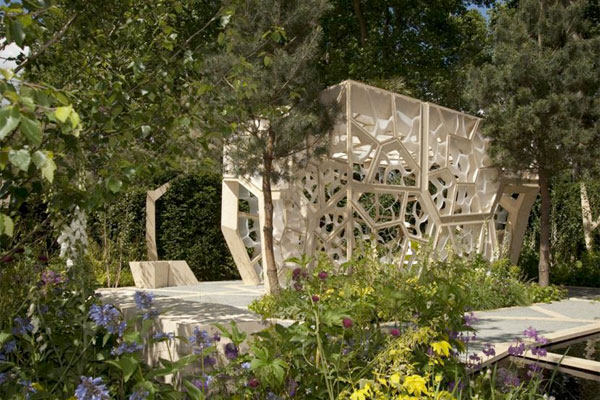 It is difficult to make general, industry-wide comments with reference to this project because it was a competition installation. However, the project certainly resulted in a degree of expansion and evolution with regard to our role. We were exploring new levels of concept-led design and seeking to communicate a very specific client brief. Once such approach was an opportunity to build on our practice’s desire that structures are effectively linked with the landscape in which they are located. This was partly achieved by the timber capillaries that ran throughout the landscape and then formed the structure of the pavilion. It was also strengthened by the open nature of the pavilion in which views were framed and air movement and sound were constant sensory links to the planting outside.
Our role was also expanded by the fact that we were the primary design force from the outset. It is often the case that we are approached by architects to provide landscape solutions for existing buildings and outside spaces. On this occasion, we used architects to help us realize the technical execution of our design of the pavilion. Often it is architects who come to us, this time it was nice to return the favour! 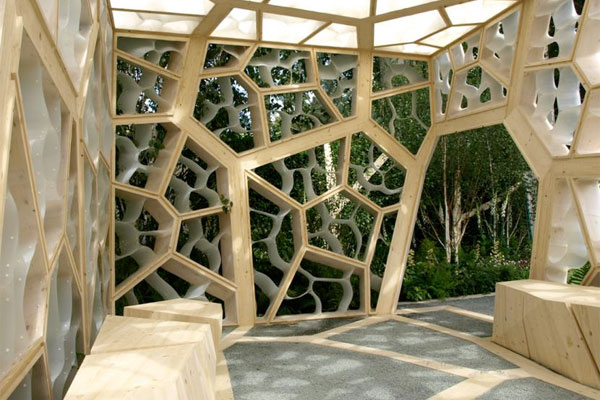