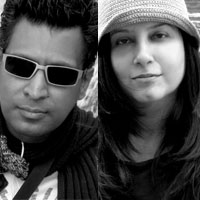 The biggest challenge was to come up with a credible ‘prototype’, which has a formidable architectural narrative, contributes to new ways of looking at space generation in general and…

The biggest challenge was to come up with a credible ‘prototype’, which has a formidable architectural narrative, contributes to new ways of looking at space generation in general and retail environments in particular. And the story board was 5m X 5m footprint with 2.4m height.

At Collaborative, we invest a lot of time for ‘inventing’ new ways of generating spaces. PROTOTYPE N[ON] is one of the projects that fully demonstrates the process

We would be confined to the sub-continental realities and specificities of the architectural process while answering this question.

Though there has been a paradigm shift in general, the way architecture is conceived in the sub-continent, the process of getting it build, by and large remains the way it was done 20 years back- though the scenario is fast changing.

The definition of ‘architects’ world over changing from mere spatial designers to ‘innovators’ who could seed and germinate a positive change in the entire spectrum of design, material science, environmental technology and so forth. India still has to achieve this ‘design Vs industry’ integration to create stimulus and environment for those successful collaborations.

This project did raise these fundamental questions, without seeking obvious answers.

Though it looks new-age, it was executed in the old fashioned way. There was not a single digital process employed in executing this project, which are largely non-existent / exorbitantly costly in Indian scenario. Pls read with previous answer .

The firm is still emerging as a known practice internationally, and we wish to charter that growth, propelled by ideas created within the central core, to retain its design direction and philosophical underpinning, when the practice attains a reasonable size. It would be fair to say that, the project had nil influence from the currents trends in academia, and the design conceptualized and largely developed by the co-founders.

We do not want to overrate the influence of this project….yep we keep getting a lot of feedback on this project from the students, who keep quoting this project when they send us their resume. 3 architectural and design schools in the country has taken up this project in their final year design development classes.