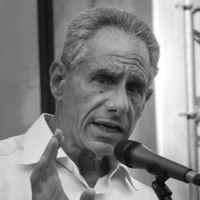 We’ve done a number of unusual projects in the area and you could argue that it is the making or the remaking of a piece of the city in that central Los Angeles and Culver City area. We made an iconic event which actually celebrates and brings…

The editors of Architype Review were fortunate enough to conduct a live interview with Eric Owen Moss. Interview highlights are published below and to hear the Dialogue in full click on the player above.

“We’ve done a number of unusual projects in the area and you could argue that it is the making or the remaking of a piece of the city in that central Los Angeles and Culver City area. We made an iconic event which actually celebrates and brings special attention to this collection of buildings that has been done over the last 15 years or so and it is by far the tallest piece at 75ft high with the height limit in the area only being in the mid 40′s.”

“The first motivation is as an iconic flagship for all of the development in the area and acknowledging that the train is coming by and traffic from National Boulevard is coming by. This gives two sets of captive audiences looking at the tower and presumably what surrounds the tower and the neighborhood.”

“The second motive in the project had to do with making a series of screens, there is actually five combinations of screens with rear projectors. The screens are juxtaposed with viewing points, so the fact that the tower moves as it goes vertically and that the screens are positioned very differently has to do with the fact that one series of screens faces the station at Venice and Robertson, another series of screens faces the station at Jefferson and La Cienega, another screen faces the local traffic going up and down National, plus the train traffic going by. Then a fourth one faces the Santa Monica freeway and then on the opposite side there is a screen with a balcony and an area excavated.”

“The base of the tower going into the ground gives it a very different operational capacity and a different presence on the land. As opposed to sitting on the land it is carved into the land, and on the perimeter of that we have a vertical garden. There is also a series of paths, walkways, and bridges from the sidewalk into the tower. It is simply a viewing tower with aspects of Pisa, Eiffel, Seattle or Tokyo. These iconic towers stand for something but are also viewing venues.”

“The screens in a sense form the perimeter, a bent acrylic material, double layered, and rear projected. Inside of that is our series of pedestrian decks that you can get off at any level and walk around. The screens allow a single image all the way up and down the face or multiple images of various kinds on multiple screens. It can be input from any location which is then filtered or edited for the images to go up on the screen. The screens are used to make shape and they are used to make space, they are not flat screens stuck on a wall of some high rise building. This is a different way of integrating an amalgamation of more traditional obligations of architecture which has something to do with space, enclosure and inside and outside and the issue of media and screens and various vantage points from which you will see those screens. Its a first in the sense of its mix of both a conceptual space shape idea and using what makes the shape or the space as a projection surface.”

“When viewing the tower from the north side the sun shines through the steel and then casts these very darkness at noon like shadows on these big pieces of plastic and they have a lot of power. There has been discussion of both using the terraces as venues to exhibit sculptures but also positioning pieces what ever they might be on the terraces and simply letting the sun shine. As the sun shines you have this parade of fascinated shadows over the course of the day on these screens.”

“Would the tower be the tower without the train or the street? probably not. The street is an essential presence and the train adds to that in a significant way.”

“The tower itself is an unusual expression of space and material and the imagery on the screens only adds to that. There is an argument to say it is not a gallery or a museum but it is an effort to extend a cultural discussion back into a venue where you don’t see it so much, meaning art on the street corner. I’m talking now both about the building and the way the building was made but in the end more about the imagery on the screen. The approval for the project screens was that it would not be commercial, something other than commercial.”

“There is a philosophical position in the building and its in a way at least implicitly a comment on media, culture, space, shape, and architectures role in that discourse.”