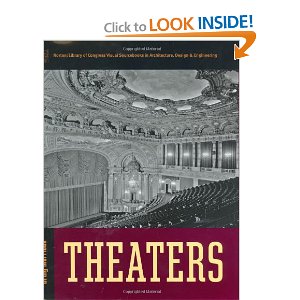 The latest title in the Norton/Library of Congress Visual Sourcebooks series, Theaters offers a richly illustrated history of a revered cultural artifact and a technological challenge, following its progression from the eighteenth-century opera house to the modern movie multiplex.

This visual sourcebook traces the development of its colorful and varied forms as they developed in early America, on the western frontier, and in cities from coast to coast. The first comprehensive study of American theaters, it illustrates their wide range from raucous music halls to vaudeville, from circus to grand opera, from World’s Fair to Coney island, from nickelodeon to glorious picture palace. Also featured are theaters for burlesque, theaters afloat, military theaters, Shakespearean theaters, summer theaters, theaters and African-Americans, and arenas (when a stage just won’t do), enlivened by a cast of entrepreneurs and showmen who were the movers and shakers of our theatrical heritage. 1200 b/w illustrations