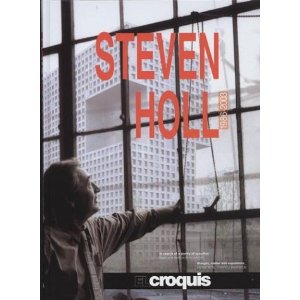 A collection of El Croquis’s previous publications on Holl includes over 550 pages with new essays by Kenneth Frampton, Alberto PÃ©rez GÃ³mez and Jeffrey Kipnis, as well as interviews with and essays by Holl himself. No less than 45 of Holl’s previous projects form the bulk of this comprehensive retrospective. 79 Steven Holl 1984-: 93 Steven Holl 1996-1999: Projects such as the Knut Hamsun Museum in Denmark, the Helsinki Museum of Contemporary Art are documented in this issue. Introducing the volume is an interview held by Jeffrey Kipnis with Steven Holl and a text by Alberto Bertz-Gomez on the poetics in Holl’s works. 108 Steven Holl 1998-2002: Includes the latest realised projects by Steven Holl, such as the Sarphatistraat offices in Amsterdam, the Y House in New York, the Bellevue Art Museum in Washington, and the CALA College of Architecture and Landscape Architecture in Minneapolis. Included are also the first prizes won for the designs of the Nelson-Atkins Museum of Art in Kansas City and the Cornell University College of Architecture in Ithaca, New York. 568 p ills colour & b/w 24 x 34 Spanish/English hb.