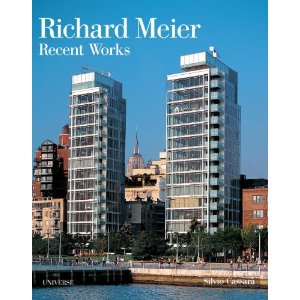 Beginning with his ascent in the late 1960s, the work of Richard Meier has been identified with a careful but decisive reflection on modernity, its origins, and its potential as a continuing source of innovation.
Collected here for the first time in paperback are the large-scale projects Meier developed during the last decade–mature works that coincide with his celebration as one of the world’s foremost architects. His reflections on being heir to an abstract modernist ethic meld together with his concepts of the city and the contemporary landscape.
Meier’s architecture privileges large public works above others, using their monumentality to imagine the possibilities of contemporary civic spaces. The recent Church for the Jubilee in Rome demonstrates the conjunction of modernity with simplicity and emotion of form, light, and material.
But Meier also uses smaller-scale private commissions–such as the celebrated 173/176 Perry Street residential towers in New York–as an opportunity to explore the limits of his unique and immediately recognizable brand of modernism.