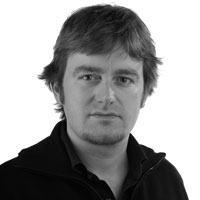 Required by the building owners was only the simple and unemotional claim of a book storage instead of an experience of space which the working and undisturbed learning in an inspiring environment supports and stimulates. Our aim was also to place the books as a carrier of relevancy in the center of the campus. Because the books are visible everywhere on the campus no one asks anymore where the library is. The hardest difficulty was how to handle the huge amount of books in such little space. The solution was an extreme high concentration in the center part of the library to create two areas of liberty where men take center stage.

For us the particular was the fact that Stephan Weber and I – still studenst at that time – had the possibility to create the own university library under the name of zauberscho(e)n. And finally realize the idea. It was the first time that we really put ourselves in the role of an architect, not only theoretically anymore. With our professor´s support, Mr Herbert Buehler, we coped with all the ups and downs of being an architect. It wasn´t always easy!

The change of the barracks to an art campus is one of the most beautiful examples for the conversion of a historical structure. This area of conflict between the old martially and heavy buildings and the contemporary light extention shows both the past and the future. Because of the shrinking population and the increasing amount of needless building typology the conversion and not the construction is the challenge of Europe in the next decades.

Even because of the fact that we operated out of the university we were aware of trends and style. Only the one who knows it is able to ignore it. The library for architecture, art and design at the Leonardo Campus in Muenster is no stagy blob or parametric designed fooling, already old-fashioned when done, but is more subtle concearning classic strategies realized with the newest technologies. The columns of steel, for example, refer to the special place of the former barracks and the modern art campus today. The form of the column is based on the iconographic sequence of 1878 of the British photo pioneer Eadweard Muybridge. In that sequence it was demonstrated for the first time that galloping horses are temporarily in the air with all of their for legs. We wanted to capture this progressiveness exactly. The super-transparent glass front is at the edge of the technically feasible. It is so invisible that the border between inside and outside disappears. It allows a feeling of learning and working directly in the nature.